“I guess when it’s going for you, it’s just going for you… you just have to enjoy it while it lasts and take what you can when you can.”

Colin Turkington is back. Well, technically he never went that far away. Just down to a lowly (by his standards, at least) third in the championship after a rare off weekend during the last British Touring Car Championship round at Croft. But, come Snetterton, Turkington was on it, producing a stellar trio of drives to elevate himself back to the championship summit ahead of the season finale at Brands Hatch next month.

In contrast, his chief rival Ash Sutton endured a challenging weekend, suffering with a lack of straight-line speed in his Infiniti Q50, while Dan Cammish and the rest of the new-generation FK8 Honda drivers were left ruing quite where their performance had gone, after all of the cars struggled.

For Turkington, Croft was a nightmare. And probably more than a touch embarrassing for a driver of his calibre. But the Northern Irishman arrived at Snetterton refreshed, refocused, and ready to make things right. And he got his title bid back on track immediately with a dominant victory in the opener.

While the race itself wasn’t a classic, it offered a superb glimpse at Turkington’s ultra-calm approach. Snetterton featured a new one-off qualifying format, where the top-10 cars after 25 minutes would progress to a 10-minute shootout to decide the final grid, ‘super pole’ style. 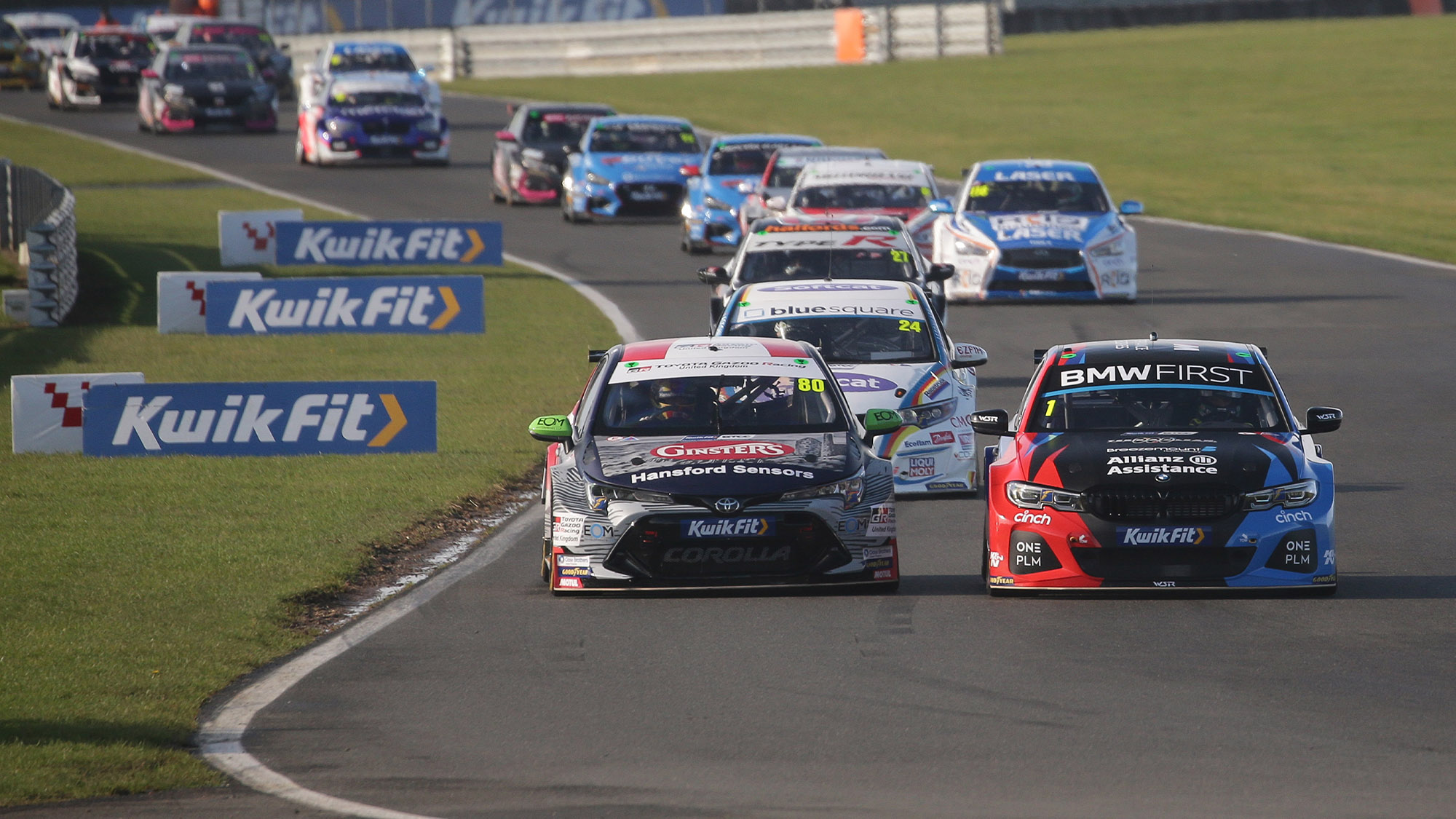 Turkington started race one on pole after new qualifying format

Turkington bossed it, being the only driver to dip into the 1min 56sec bracket to secure pole. With that done, and the turbo boost adjusted back to better suit the rear-wheel-drive runners off the line during the last round, Turkington’s only real concern was the weather.

“When the car was in the garage, we had wets on, because it looked soaking,” he said. “But we made the call to go to slicks late on. It really paid off.”

With the race starting with a dry line emerging, Turkington got a brilliant launch to open a gap into Riches, as Jake Hill’s brilliantly-qualified Honda Civic was jumped off the line by Tom Ingram’s Toyota Corolla.

This battle would provide the highlight of the race. Hill and Ingram both pressured Turkington during the early laps, but as soon as the BMW’s tyres got up to temperature he was long gone. Turkington’s cause was helped when Hill locked up into Wilson Hairpin attempting to dive-bomb Ingram, tipped the Toyota sideways and then slowed to sportingly give the spot back. All this left Turkington well clear. 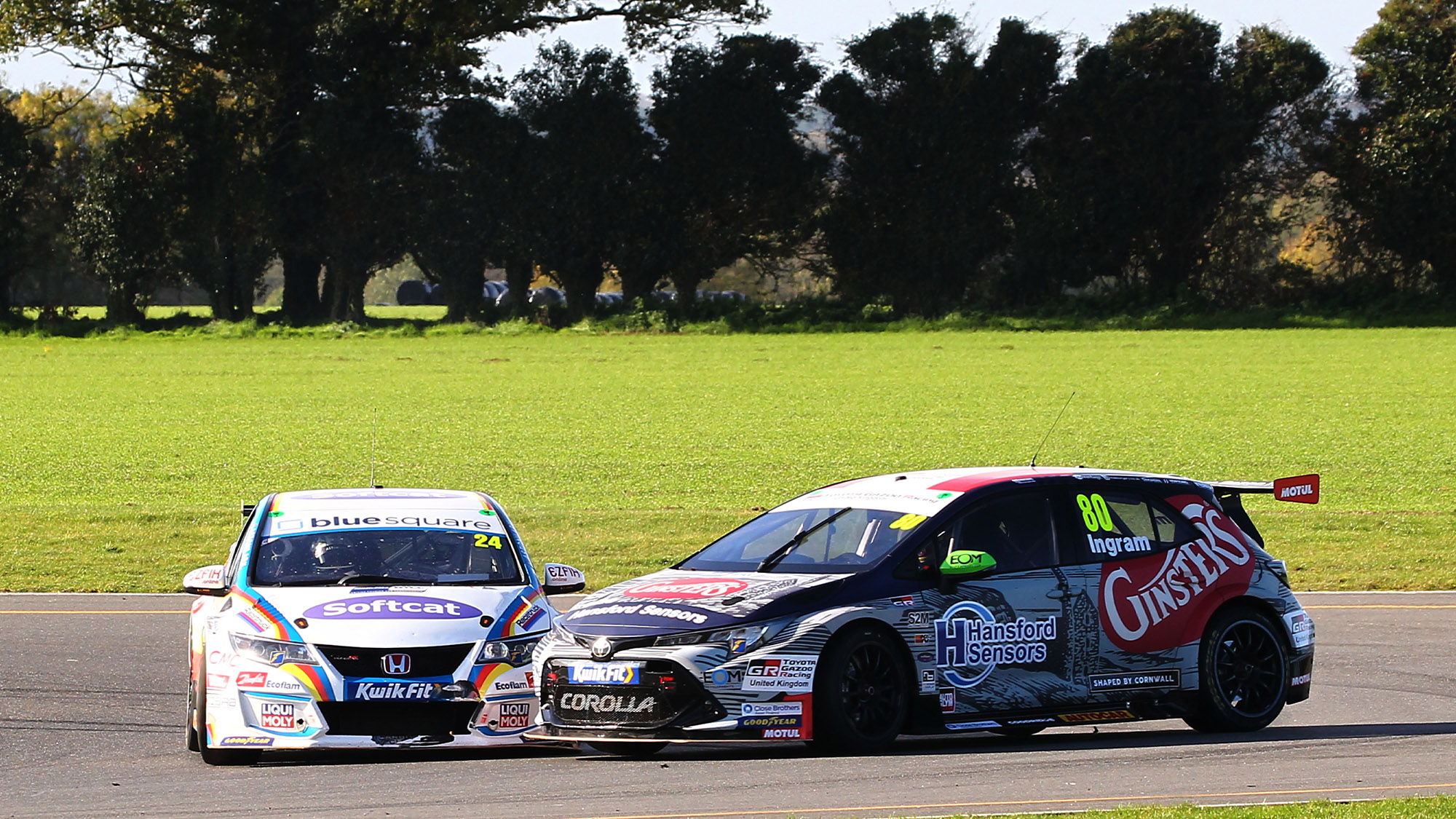 “We needed that result,” he said. “The first few laps were hard work but once we got the tyres into the window it felt great and I could just get my head down. We have to push for every point at this stage of the season.”

And the win would prove crucial. Behind the top three, Rory Butcher scraped his Motorbase Ford past both Ash Sutton’s heavy Infiniti – which narrowly avoided what could have been a damaging multi-car clash through turn one – and Dan Cammish’s oddly off-the-boil Civic. With all of his closest title rivals off the podium, Turkington’s score moved him into the joint championship lead, and suddenly his Croft setback seemed so two weeks ago…

With the full 60kg of lead onboard for the second race, Turkington had to dig even deeper to keep the pack at bay behind him. And he produced a mirror-image performance to make it two on the bounce.

After getting his customary strong start, he clung on to top spot from Ingram, Butcher and Sutton until his tyres came in, and then made a break. He’d stretched his lead to just beyond three seconds, aided by the trio behind him running within a second of each other. Turkington looked home and dry, until Jack Goff suffered a nasty accident out of Riches and brought out the safety car, leaving a one-lap dash for the flag.

But even that didn’t rattle him, as Turkington simply judged the restart to perfection to cruise home, while it all kicked off in his mirrors. Having been devoid of much action, things burst into life when Butcher rear-ended Ingram’s Toyota into Wilson, shoving him wide but delaying himself, allowing Sutton to make an opportunistic dive up the inside to grab third behind the recovering Ingram.

Butcher had to make do with fourth in his dented Ford, ahead of Hill and Cammish. It all handed Turkington a seven-point championship lead.

“There was so much pressure in that one,” he said. “It was just about surviving that first lap again, and then I could really have done without the safety car. But you can’t beat this feeling of winning…”

Well, perhaps you can.

If you’d offered Turkington the chance to pass his title rival on-track and secure a podium from 10th on the grid in the last race he’d surely have bitten your hand off. And that’s exactly what happened.

Starting from the fifth row, Turkington made some solid early progress, but was elevated onto the rostrum as others ahead hit trouble. 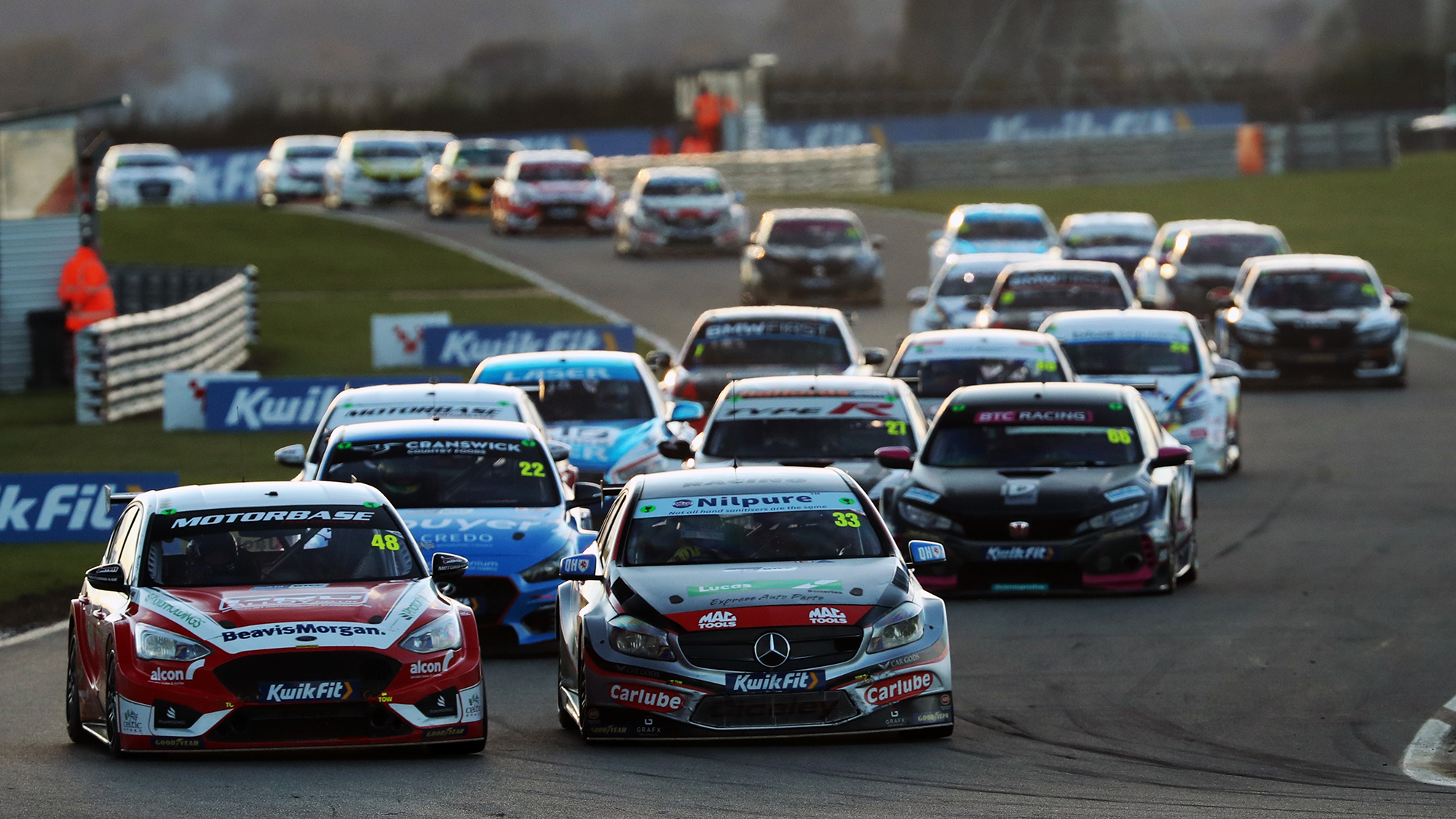 The reversed-grid draw put Chris Smiley’s Hyundai on pole, but he immediately went backwards off the line, allowing Adam Morgan’s Mercedes and Ollie Jackson’s Ford through. Jackson then proceeded to pull off the move of the meeting around the outside of Morgan through the fast, tight Hamilton left-hander to grab the lead.

Behind, Turkington made it up to eighth early on, then slipped past Hill to follow a four-car battle between Smiley, Butcher, Sutton and Ingram ahead. When Sutton tried a move on Smiley at Agostini, Ingram found a gap to the inside and passed both, allowing Turkington to really close in.

Things then came to a head when Sutton got a run around the outside of Smiley out of Murrays, but the Hyundai moved right and squeezed Sutton wide, costing him momentum and opening the door for Turkington to draft around both on the pit straight.

With Sutton in his mirrors, Turkington didn’t have to push forward too much more, but got even luckier when Ingram scraped alongside Butcher through Coram on the final lap, only for the contact to shrug Butcher onto the damp grass, his car careering across the kerbing at Murrays and rejoining to spear the Toyota. Two more spots gained. Even more points.

“I can’t believe I got a podium from that, I’d have been happy with fifth!” said a jubilant Turkington. “It’s just been a perfect weekend.” 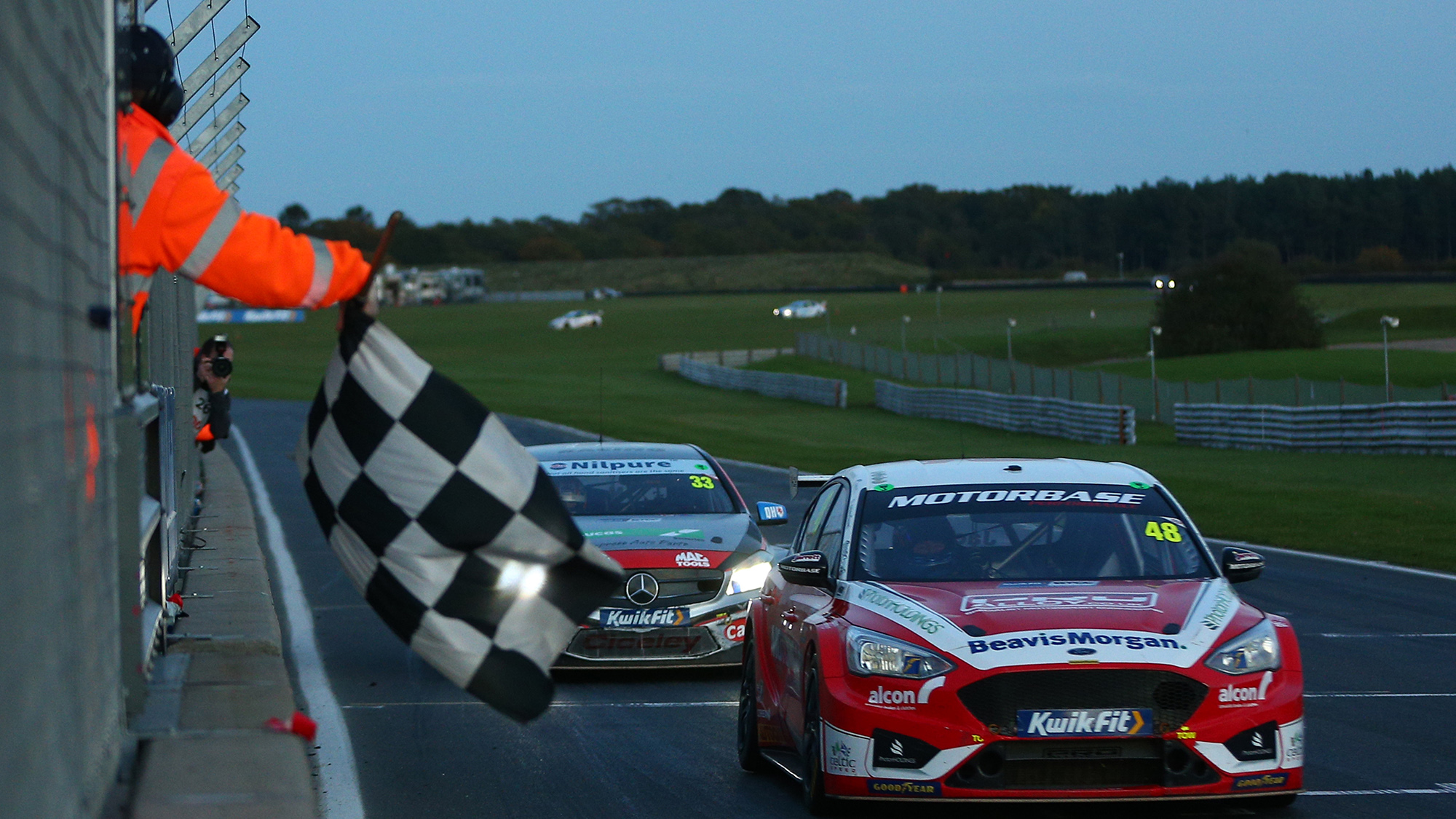 Jackson held off Morgan for the victory

Up front, Jackson repelled huge pressure from Morgan to claim his second career BTCC win, and his second in a month following his Silverstone breakthrough.

“After Silverstone I was just so emotional, I actually feel like a race winner this time,” he smiled!

But the biggest grins came from the BMW garage. With Sutton behind in fourth, Turkington carries a nine-point lead to Brands. But can it be enough?

“Nine points is nothing,” Turkington countered. “I was eight behind going into the final race of the year last season, and starting that at the back, and look what happened! Things change so quickly in this championship. I just knew I had to get as many points as possible here, as Brands will be the great unknown.” 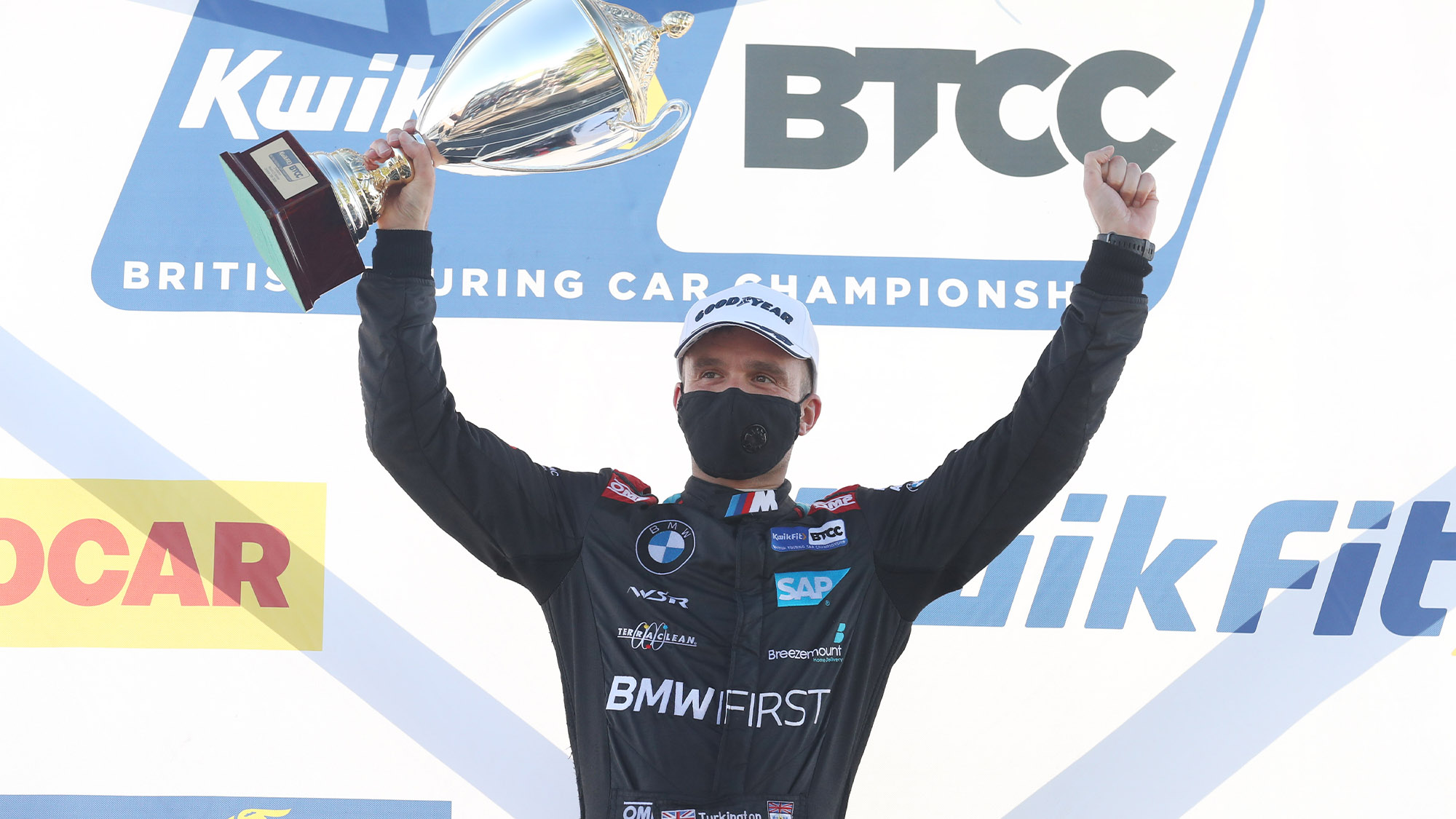 On the top step: Turkington now leads the championship

And what of Sutton? He’s already assured himself this year’s Independents’ crown, and he’s happy for that. But there’s a bigger picture.

“This just wasn’t our track, and it doesn’t help being hit left, right and centre. But we’ll be back all guns blazing at Brands,” he said. “It’s great to win the Independents’ and add it to my list. But the overall is the real target. I’ll just have to pull out all the stops.”

Buckle up folks. Brands could be another rollercoaster…

2020 BTCC Championship points after Round 24