Or is it an everyday family car that was turned into a fire-breathing monster: the Ford Sierra RS500 Cosworth? Dubbed by no less than Motor Sport itself as “arguably the greatest racing car ever”, two of the key men that contributed to its cult status the first time round, BTCC legend Andy Rouse and his engineer Alan Strachan, now aim to continue its legacy with three new continuation models. They will be built to the exact 1990 Group A specification of Rouse’s eponymous team and engineering company, using the data and designs of the time.

Strachan told Motor Sport he and Rouse were hoping to recapture the “fire-popping, whizz-banging, hurtling along at a horrendous amount of speed” atmosphere of that era with the new examples.

The RS500 dominated touring car racing the world over in the late ’80s and went completely undefeated for three years in BTCC between 1988-90, with the four-time British champion’s Andy Rouse Engineering producing over 30 cars and 100 engines for sale worldwide.

Strachan was an engineer working for Rouse’s team at the time, and it’s his racing restoration and engineering firm CNC that is producing the three new cars. “If anyone can do this, Alan can,” Rouse told Motor Sport. 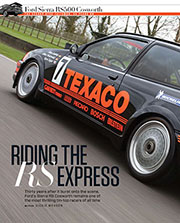 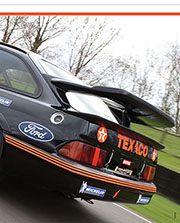 Thirty years after it burst onto the scene, Ford’s Sierra RS Cosworth remains one of the most thrilling tin-top racers of all time It’s July 1988 and I’m at Brands…

May 2017 Issue
By Dickie Meaden

Sharing a career-long bond with the RS500, Strachan first got the idea after hearing rumours on the restoration grapevine.

Galvanised by the discovery of this untouched original ’80s Sierra 909 bodyshell, the next issue was recalling how to put the rest all together.

“A lot of it’s from memory to be honest – there’s drawings and bits and pieces, original components around,” Strachan explains.

“It was a time in motor sport when 100% records were taken but never kept, they never seemed to be important.

“Andy and I were talking about this the other day, we just considered these cars as tools to do a job. Once that job had been done for that season, if a new car was built then old one went over to a corner of the workshop and eventually got sold to somebody. You’d come into work in the morning and it would be gone.”

Strachan is at pains though to emphasise the authenticity of what his team is producing.

“Finding the bodyshell is really the icing on the cake, because without that all the other bits are relatively easy to reproduce,” he says. “We can reverse engineer that stuff in-house.

“I’m the kind of a person who doesn’t really like the term recreations or replicas, because nobody seems to use that as a compliment of any kind – it’s almost like some cheap imitation, but it’s not.

“We use the correct specifications it should have been built to, making it a Group A car in its own right.

“The fact is, being able to produce, run and maintain and keep it going will cost the same money as a car that raced in period.”

With the first car rolling out in early 2022, a confident sounding Strachan says he has “options” for the second body shell and has already “had a sniff” of a third.

As well as having access to the Andy Rouse Engineering drawings and data from the time (in addition to excellent powers of recall), another old friend, engine guru Vic Drake, has provided input to make sure the 575bhp Cosworth YB units are on song.

“He’s got input inside from back then that sadly otherwise gets lost and forgotten,” says Strachan.

For the vastly experienced engineer, there’s immense pleasure in being able to create what is a classic cult racing car. 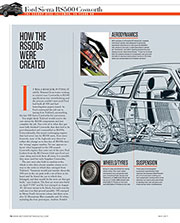 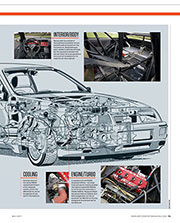 It was a rush job, putting it mildly. Demand from teams wishing to convert race Cosworths to RS500 specification was overwhelming and the process couldn’t start until Ford had built…

May 2017 Issue
By Andrew Frankel

“It’s just nice to keep the spirit all alive really,” he says. “I was lucky enough to be involved with the cars in their heyday, which was a real eye-opener.

“All the different cars of that era had something about them – they were just so spectacular.

“Fire-popping, whizz-banging, hurtling along at a horrendous amount of speed-type period racing. They were great at going in straight lines, maybe not so much going round corners!

“They took a driver to drive as well, there’s no electronics on these things. They took some holding on to, just to keep them on the tarmac.

“I ventured off and tried F3000, but decided that was far too pretentious. Building a race car out of something that’s not supposed to be a race car is a cool concept.”

60-time race winner Rouse is also in no doubt of the car’s historical importance and provenance.

“It was a great race car, but the important thing about it was it was affordable as well, that was key to its success,” he says.

“The best racing saloon ever produced, I would say.”

Prices for the continuation Andy Rouse Engineering Ford Sierra RS500 Group A Touring Car start at £185,000. Enquiries can be made at [email protected]