By 1.30pm on Sunday afternoon, Ash Sutton had lost the lead of the British Touring Car Championship at Silverstone. And by 6pm he had absolutely no business being back at the points summit. But he was. And it was remarkable.

After a disastrous tyre failure during the second race on the Northamptonshire venue’s National layout, Sutton looked down and out. Yet he produced a truly stunning drive in the finale to haul his Laser Tools Racing Infiniti Q50 from the back of the grid to the podium, leaving chief title rival Colin Turkington in his wake as he went. It was certainly Sutton’s greatest-ever career drive, and perhaps one of the best you’re ever likely to see in the BTCC.

But overall, Silverstone showed quite how quickly the twists and turns of this year’s championship are coming. All three races wins should have gone to front-wheel-drive machinery for a second weekend in a row, with Dan Cammish and Tom Ingram reigniting their battles from Thruxton. But then fate played its hand to gift Turkington a win when he perhaps needed it most, only for Sutton’s brilliance to take the shine off what was otherwise a tough day for the BMWs.

Finally, there was a breakthrough win for Ollie Jackson, giving Motorbase some much-needed cheer after star driver Rory Butcher thankfully escaped injury in a terrifying accident during a damaging final outing. 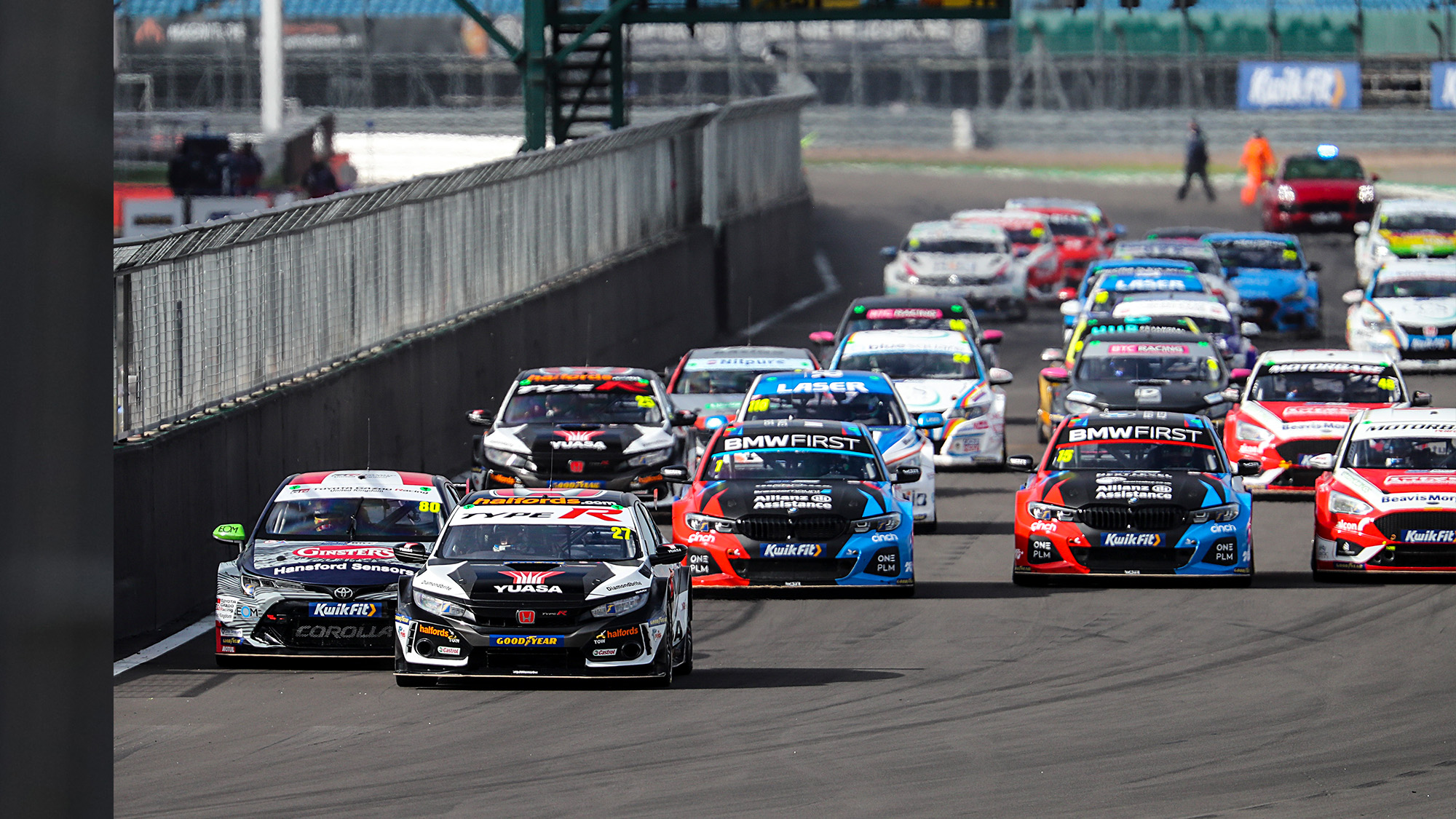 The start of the weekend looked very much a FWD affair, once again with Cammish and Ingram to the fore, just as they were at Thruxton last time out. If there’s one thing Cammish had learned from a week ago, it was the prodigious early pace of Ingram’s Toyota Corolla.

Having been jumped from pole last time out in Hampshire, Cammish was determined not to let his chance slip again.

While Team Dynamics’ setup makes Cammish’s Civic visibly more stable and consistent, Speedworks goes a different way with the Toyota, heaping on the front-end grip leaving Ingram with a car that’s strong at the nose, and more than a little tail-happy. Just how he likes it.

The difference between the two approaches was clear during a thrilling first race. Cammish was untouchable in qualifying, setting multiple laps good enough for pole to line-up ahead of Ingram in a mirror image to the Thruxton grid.

But, what Cammish’s setup gives in consistency, it lacks in early bite. He got away well enough to head Ingram off into Copse, but the more lairy Toyota enjoyed far better early tyre heat and climbed all over the Halfords Civic during the opening laps. 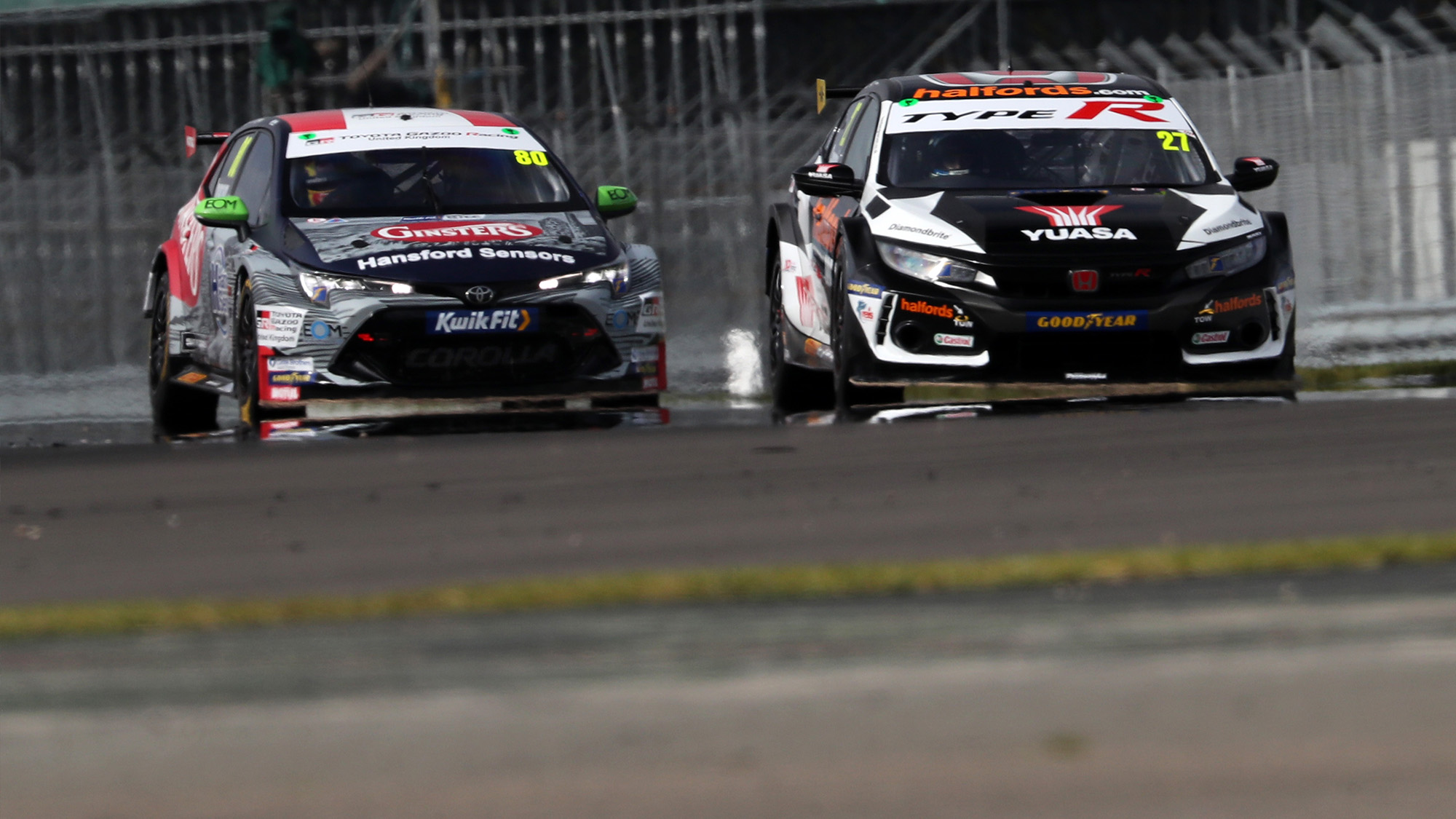 Ingram first got alongside at Becketts, but Cammish closed the door into Brooklands, however it seemed like a matter of time until Ingram got past. Then, came salvation.

Michael Crees’ spinning BTC Racing Civic became lodged in the Becketts gravel and summoned the safety car, just as Ingram attempted a run up the inside for the lead out of Woodcote. BTCC rules allow drivers to continue racing until the safety car line. At first it looked like Ingram had the move done, but officials went back to find Cammish in front by the width of a Honda badge.

Cammish took his place back out front and the caution period allowed him to work his Goodyears more. When racing resumed, he gradually eased clear of Ingram as his front-end-grip advantage began to wear off.

“This is a role reversal from last week,” said Cammish, “and I really needed that. Tom’s Toyota is just so strong early on. He has so much front end and he can use that to rotate the car really well. Perhaps we’re a bit lazier in that respect. He just had so much traction early on and I was so glad to get the call saying we could reverse the positions under the safety car. After that I think his front end faded and mine just got stronger.”

The fight for the final podium place was also a belter. As Cammish and Ingram scampered away, Butcher held the Motorbase Ford third, but with heaps of pressure from Turkington and Tom Oliphant’s BMWs, and Sutton’s Infiniti, which had struggled with the full 60kg of ballast on board during qualifying.

Butcher wasn’t as fast through the corners as the rear-driven BMWs, but enjoyed a straight-line advantage that made passing him a difficult task. Turkington gave it his best shot but, when his rear gunner Oliphant had to drop out after damaging his rear suspension on the kerbs at Copse, Turkington had to turn his attentions to fending off championship rival Sutton instead.

Adam Morgan followed the three-car fight to the flag in sixth, ahead of Jake Hill and Matt Neal, who survived a lurid sideways moment at Becketts to hold eighth. 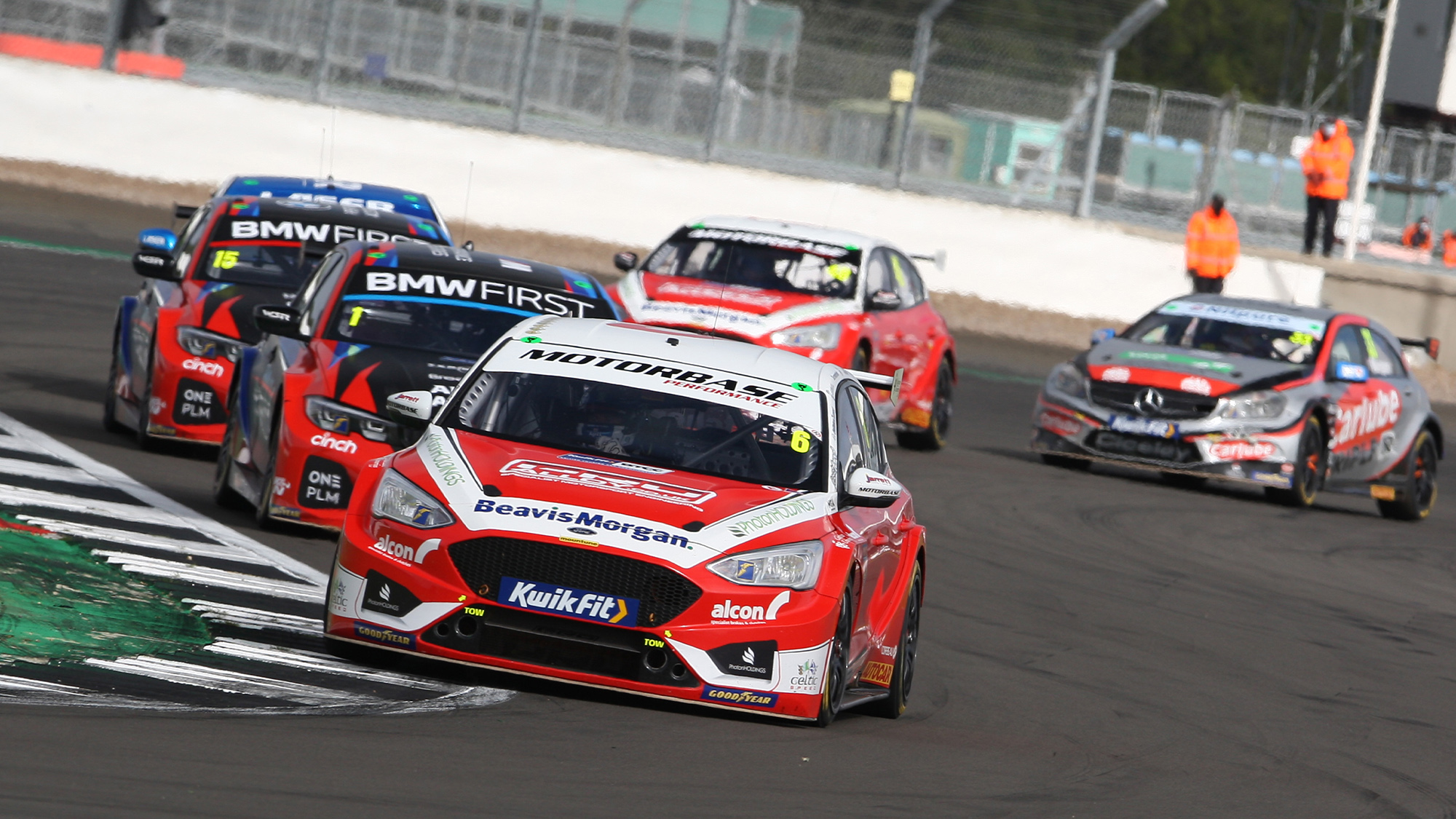 Race Two is when the momentum began to swing, firmly toward Turkington. This should have been Ingram’s race, had it not been for a damaging puncture that effectively ruined his weekend.

Cammish again got off the line well, but now with a heavier car couldn’t fend off the Toyota as Ingram found space inside at Becketts after Cammish washed out on the exit of Copse. Ingram scampered away and that should have been it, until his left-front delaminated – thought to be a result of aggressive use of the inside kerbing at Brooklands corner – and put him out.

But worse was to come for the other title challengers. Now with some weight off, Sutton had made a great start from fifth to vault past Turkington through Copse, but then when he went to brake for Becketts, his front-left mysteriously locked, sending him slithering into the innocent Focus of Butcher.

“I have no idea what happened, and I feel really sorry for Rory as he was on the receiving end of it,” said Sutton after. “Whatever caused it meant the tyre developed a huge flat spot and I radioed the team straight away to say ‘we’ll be lucky if we see the flag in this one’.”

His prediction rang true. Sutton dropped his pace to try and manage the vibration but the entire tyre carcass let go on lap 17, taking half of his front bodywork with it. Sutton pitted for repairs to the wheel and steering and did rejoin to claim the fastest lap of the race. But his chances for race three didn’t look good from the very back of the grid. 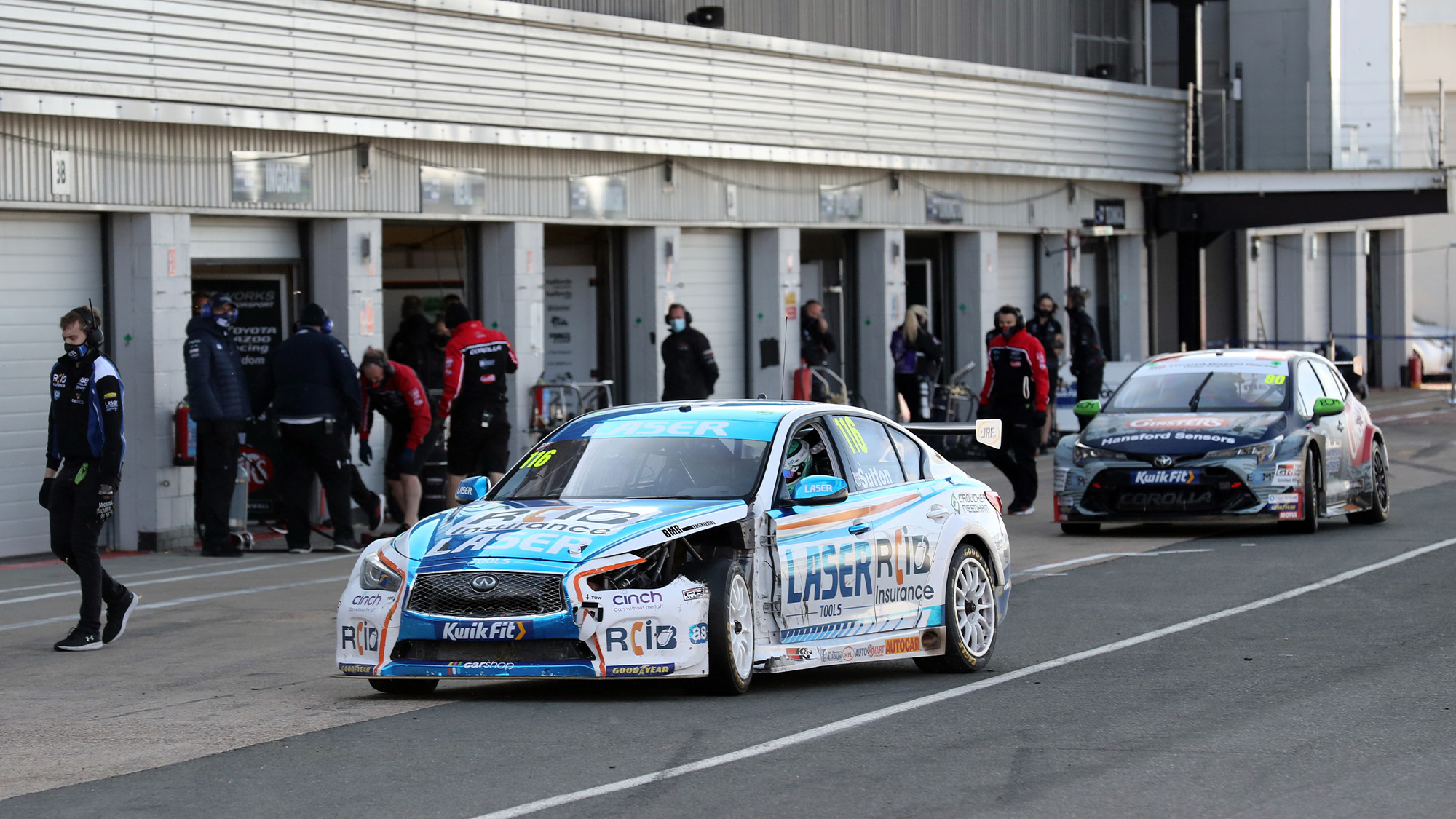 And through it all came Turkington. Re-passing Sutton after the collision, picking off Cammish with a fine move out of Woodcote, and then inheriting the lead when Ingram hit trouble. Surprisingly, it was only Turkington’s second BTCC win at Silverstone in his 16-year BTCC career, but his first since 2015 and his first for BMW.

“I’ve never won here for WSR, and it’s like our home grand prix, so it has a special feeling,” he said, no doubt buoyed by the fact Sutton’s non-score handed him a six-point lead in the championship. “I could feel the momentum swinging away from me at Thruxton, but this shows how fast things can change. I was mindful of staying off some of the kerbs here as I’ve seen punctures like Tom’s in previous years.”

Adam Morgan took a fine third ahead of Neal, the charging Aiden Moffat and Josh Cook. 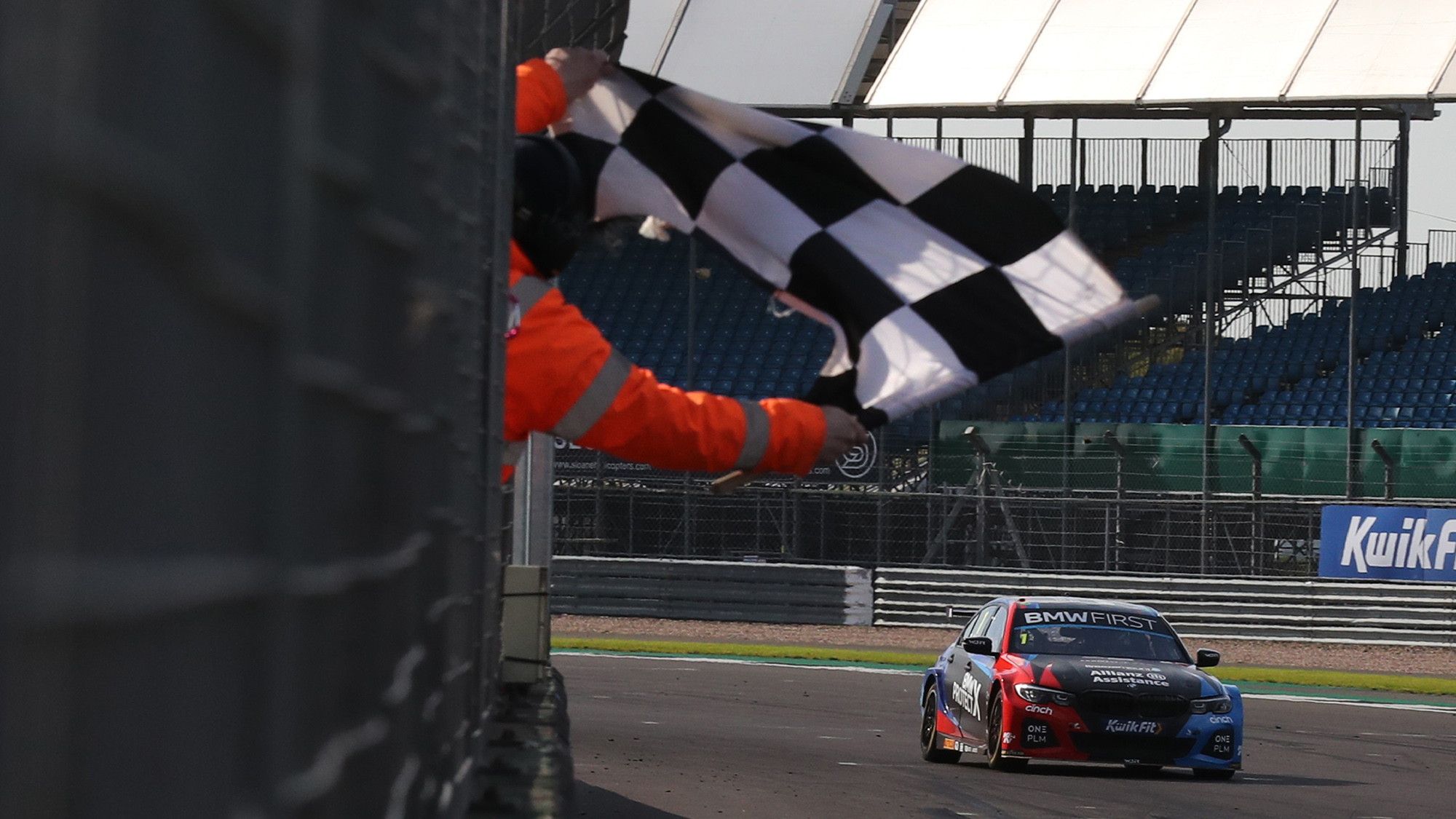 Race Two win put Turkington at the top of the championship table. Until Race Three…

So, order restored then. Turkington back at the top and everybody else playing catch-up. Not quite.

Race Three was a stunner, enlivened by Sutton’s tremendous charge. The one positive of his race two troubles was an Infiniti totally stripped of ballast for the finale. And it was on rails for both parts of a turbulent third outing.

The first portion had to be stopped when Butcher and Neal came together into Becketts, sending the Ford spinning at unabated speed across the grass before hitting the barriers hard and barrel rolling to a stop across the track. The red flags were out immediately, and thankfully so was Butcher, who emerged unscathed from the frightening wreck.

Sutton had started way back in 26th for the original, but had already made his way back onto the fringes of the points before the race was halted and the grid reset. With just 12 laps to make it count on the restart, Sutton wasted no time, pulling breath-taking moves every lap, working his way ahead of the fully-ballasted Turkington early on and then just carving his way through the pack to latch on to the top four.

He nailed both Cook and Morgan into and out of Becketts, and then pulled off an incredible move on Oliphant, running around the outside of the BMW through Luffield, Woodcote and Copse to eventually grab second. However, the officials deemed him to be beyond track limits when he finally did get the pass done, and reversed the places after the flag.

🎢 What a rollercoaster day!

By far the best race of my career.

The car came alive when she was ballast free, after a disaster race 2.

The boys at Laser Tools Racing & BMR Engineering gave me a faultless package.

Sutton only just ran out of time to catch Jackson, who put in a brilliantly controlled drive to win after vaulting past pole-man Oliphant at the first start, and then put up a stern defence in the second part until Oliphant had to turn his attention to the charging Sutton behind.

“I’m so emotional,” said Jackson as his first BTCC win sunk in. “That an amazing day. This is living the dream!”

And it was a dream for Sutton, too, even when demoted to third post-race. With Turkington struggling in the pack with full weight, he could only manage a lowly 10th, swinging the championship lead back in Sutton’s favour by four points.

“I’ve now realised where our pace went after Donington Park, and it’s the weight,” said Sutton. “Since then we’ve always had weight in the car, and with it all out for this one it just felt phenomenal. It all fell into my hands a bit, but I just took my chances when I got them. One more lap and we could have won it, but I can hardly be disappointed with this!” 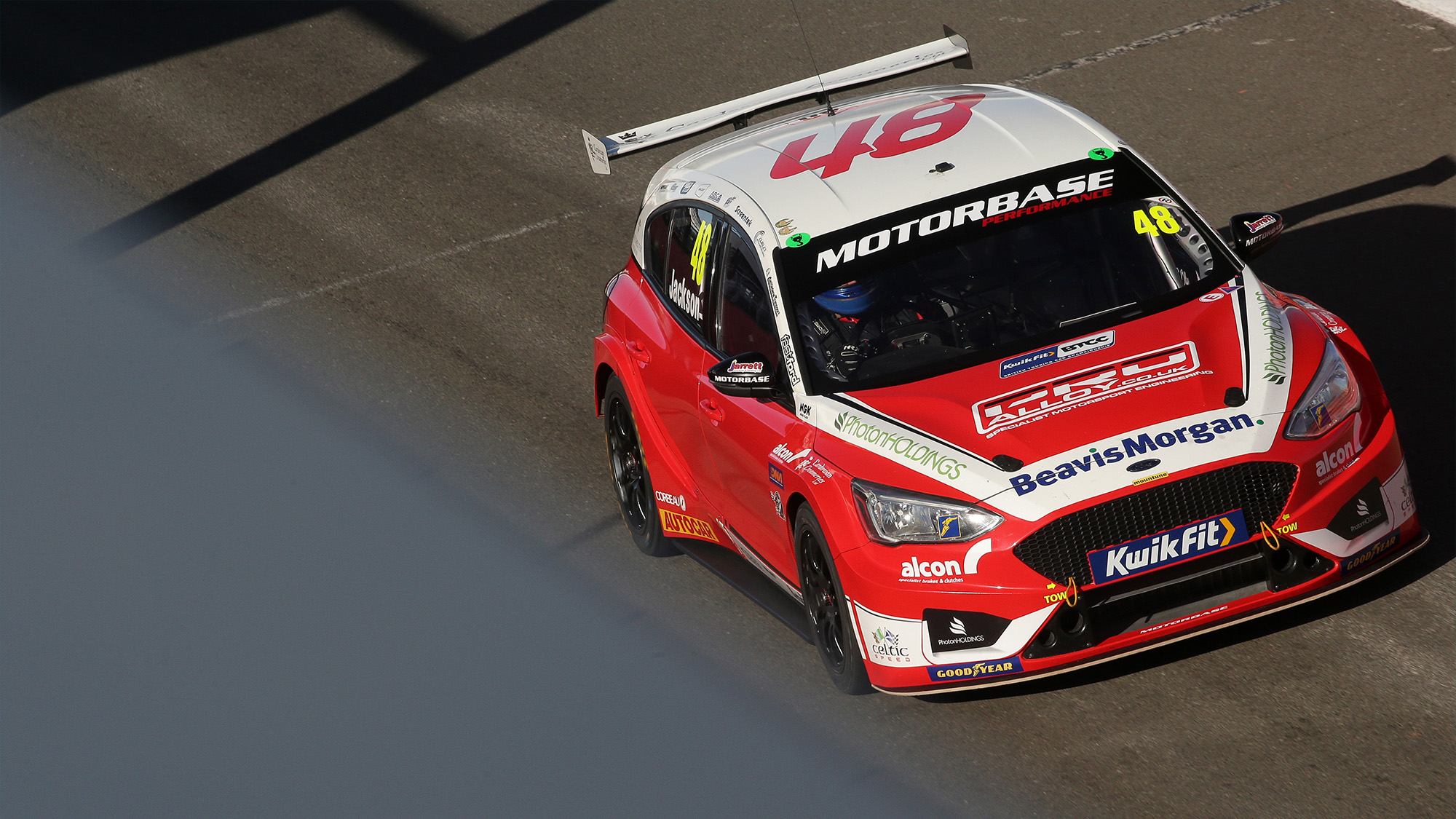 Ollie Jackson was emotional after his debut win in Race Three

Cammish rounded a strong weekend with fourth, ahead of Morgan and Senna Proctor’s Hyundai. But things only got worse for poor Ingram, who was spat into the barriers at Brooklands after contact in the pack, denting his hopes of a title revival.

But the talk of the weekend centred on Sutton – possibly the best attack-minded touring car driver anywhere at the moment. And Turkington will know that. Next up is Croft, a circuit Turkington has enjoyed so much success at in the past that he’s been unofficially nicknamed ‘The King of Croft’. But now his crown might just be under threat, in more ways than one.

2020 BTCC Championship points after Round 18