VSCC at Prescott, HSCC at Croft, British GT at Brands Hatch, motorcycle racing at Cadwell or mix and match? DTM at Brands Hatch, bikes at Mallory or trucks at Donington? CSCC at Brands Hatch, HSCC at Oulton Park or rallycross at Lydden Hill? Few months match August for bewildering choice – and frustrating clashes…

There’s half a chance that paddock breakfasts have been mentioned before in this column, but that at Prescott ranks higher than most. Mallory Park has a billboard proclaiming its Lakeside Diner’s morning fare to have been voted the best in the land, but for all its splendour it falls slightly short of the local produce served here – and when you factor in the glorious view from the Clubhouse terrace, then the utter civility of the service…

And as you wash down sausages and eggs with a strong black coffee, the soundtrack below is that of crank handles being turned, Austin 7s gently burbling into life – and, occasionally, slightly raised voices when Act A doesn’t produce Desired Effect B.

It’s not a bad way to start the day.

A good entry is ever guaranteed for the Vintage Sports-Car Club’s August Cotswolds pilgrimage, nowadays the last surviving event to use the shorter Prescott course – 880 yards, rather than the full 1127 – and this year drew almost 240 drivers. 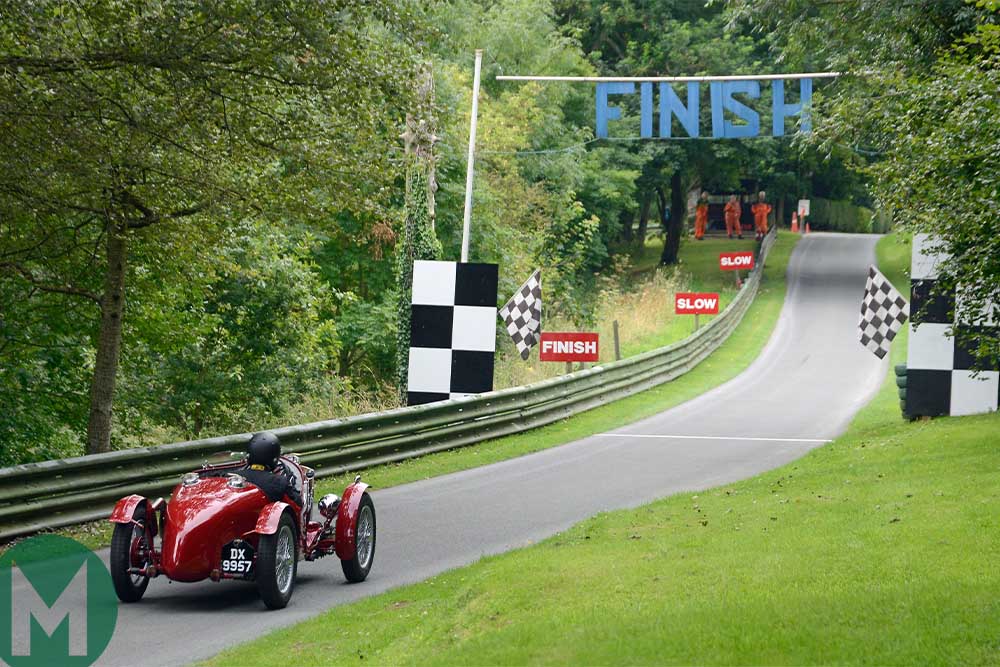 As the first tiny Austins commence their gentle ascent, a young lad turns to his father and asks, “Are they doing a warm-up lap?” He hasn’t yet quite grasped the concept of hillclimbing, but our sport needs to breed the enthusiasts of the future and this is as good a way as any to get them hooked – a world ripe with engaging machinery and a multi-generational competitive cast who are accessible, friendly and united by a common passion.

Hopefully, the newcomer will have been slightly more impressed the following afternoon, when James Baxter (Riley-ERA) took to the hill and posted a 40.36sec, the weekend’s best time but a few tenths shy of his own hill record in ERA R4A.

Barely had the day started than the red flags came out – not to symbolise any mishap, but to allow a local farmer to round up two dogs that had escaped their home and were roaming a little too close to the top of the course. It wasn’t a full-on canine track invasion of the kind that used to be common at Interlagos or Istanbul Park, so resolution was swift.

There was a slightly more alarming moment when Alan Harpley (Avon Alvis Special) arrived a fraction too briskly at Semi-Circle and disappeared into the void beyond. There was no accompanying thud to imply subsequent contact – and the next audible sound was that of gears being fished before he joined the paddock return road at the bottom of the meadow.

It’s quite possibly the quickest way to get there, but isn’t recommended.

There was a time when the DTM was unofficially known as the World Catering Championship, thanks to multi-tier hospitality pavilions that dwarfed anything Formula 1 teams had yet constructed. Rarely had consumption been so conspicuous.

Little has changed today in that respect, but – refreshingly – the DTM is taking a simpler approach on the track, with pared-back technology (more power, no tyre warmers, no pit-to-car radios) that is designed to make cars more challenging to drive.

No question, they are hugely engaging – and perfectly suited to an old-school setting such as this, particularly within the relatively tight confines of the grand prix loop. Moments before qualifying begins, the only sounds at Westfield are the gentle rustling of leaves and the distant, distinctive call of a green woodpecker from somewhere within the canopy above. And then cars are released, a volley of thunder accompanied by serial sparks… and a horrible off-throttle rattle that affects the four Aston Martins. The racing is close, rather than infinitely changeable, but the spectacle is undeniable.

While the DTM is notionally the headline act, the W Series’ first British appearance creates more of a stir – leastways off the track. That’s partly a function of its huge enclave in the outer paddock, but mostly a consequence of the interaction between public and participants.

On the evidence of previous form in established stepladder categories (GP3, BRDC F3, Formula Renault 3.5 and suchlike), it is unlikely – but not impossible – that any of the leading runners will earn a decent F1 seat any time soon.

The interesting thing, though, is that many of those requesting driver selfies were young girls who have a fresh set of role models and might henceforth be inspired to give the sport a try – and who knows what might be found within that fresh demographic? 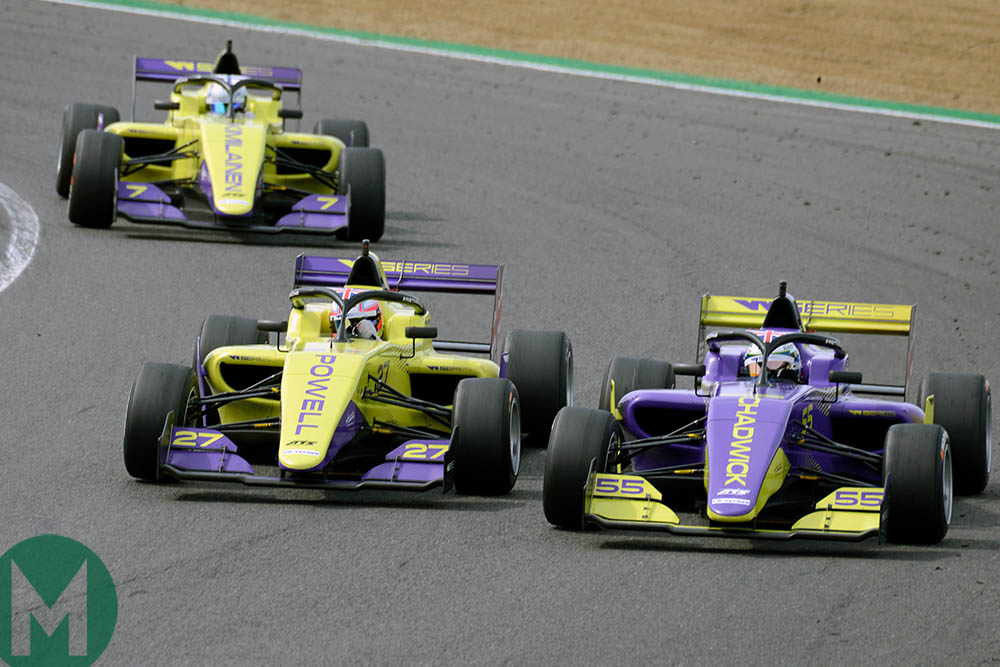 It’s no surprise that the northbound M6 should be busy through Staffordshire at the dawn of the final bank holiday before Christmas, but there are always pleasing alternatives. Peeling west along the M54 opens the door to the A41 and A49, brisk, open roads that are fringed by cow-dappled greenery and lead eventually to the narrow lanes that embrace Oulton Park.

A note, though, to the driver of KD56 KVV (in the unlikely event that you happen to be reading this): in future, please don’t allow your passengers to chuck empty Carling cans into Cheshire hedgerows. Clearly, our politicians are not the only ones who behave unacceptably nowadays… 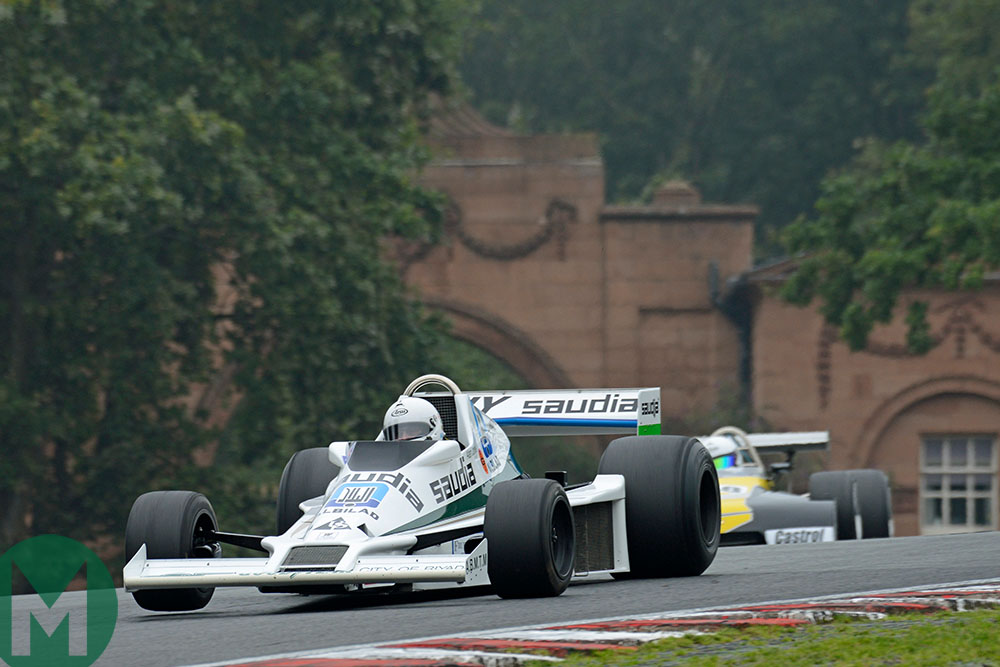 Returning to the matter at hand, this year’s Historic Gold Cup was effectively a three-day HSCC clubbie – there were some lovely cars coupled with some very good racing, but given the illustrious handle the meeting really requires a signature showpiece. This year the main prize went to the aggregate winner of the two-part XL Aurora Trophy race, effectively Formula Libre. Jamie Brashaw (March 73A) won the opening heat but tangled with closest rival Mark Dwyer (March 742) at the start of the second, leaving the road clear for Martin Bullock (Williams FW06) to fend off James Murray (Chevron B25) and claim overall victory. It was fitting that a former grand prix car should win, given the Gold Cup’s distant F1 pedigree, but really the focal point needs to be something stronger than a field containing 14 cars (a couple of them hopelessly uncompetitive) in five classes.

There were, though, many upsides to the weekend. Andrew Hibberd (Brabham BT18) won both Historic F3 races at a canter, but the second featured a marvellous three-way battle behind him, Christoph Widmer (BT18A), Andrew Jarvis (March 703) and Peter Thompson (BT21) crossing the line almost side by side, though the timing beam reckoned the three were separated by 0.110sec.

Frank Lyons (Ford Escort) and Neil Kavanagh (Mini 1275GT) had an entertaining tussle towards the rear of the Dunlop Saloon Car Cup opener, the sizeable crowd cheering appreciatively when the former was unable to find a gear at Knickerbrook and enabled the Mini to nip ahead. 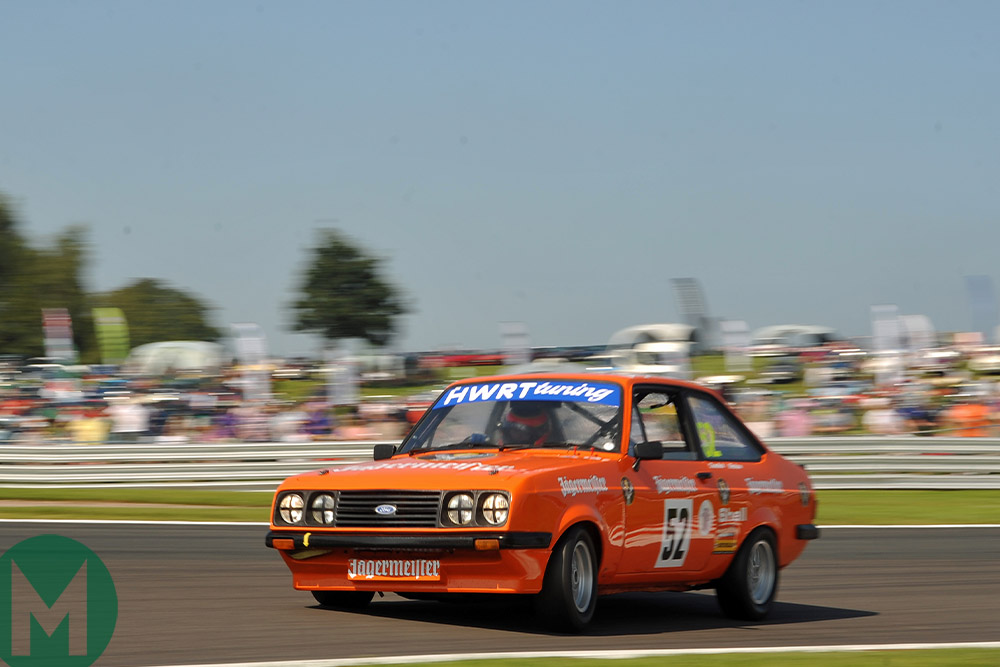 And then there was Jason Minshaw’s performance in his newer Escort RS2000. He’d run towards the front in the ’70s Road Sports race, finishing third to Jim Dean (Lotus Europa) and Charles Barter (Datson 240Z), but was on a hiding to nothing against the more highly modified cars in the second Dunlop race. He duly ran around towards the back, but that didn’t dilute his zest for the task in hand, the orange Ford being balanced throughout in a sequence of exquisitely controlled drifts,

He was 11th of the 12 finishers but had arguably extracted more from the equipment at his disposal than anybody else out there.