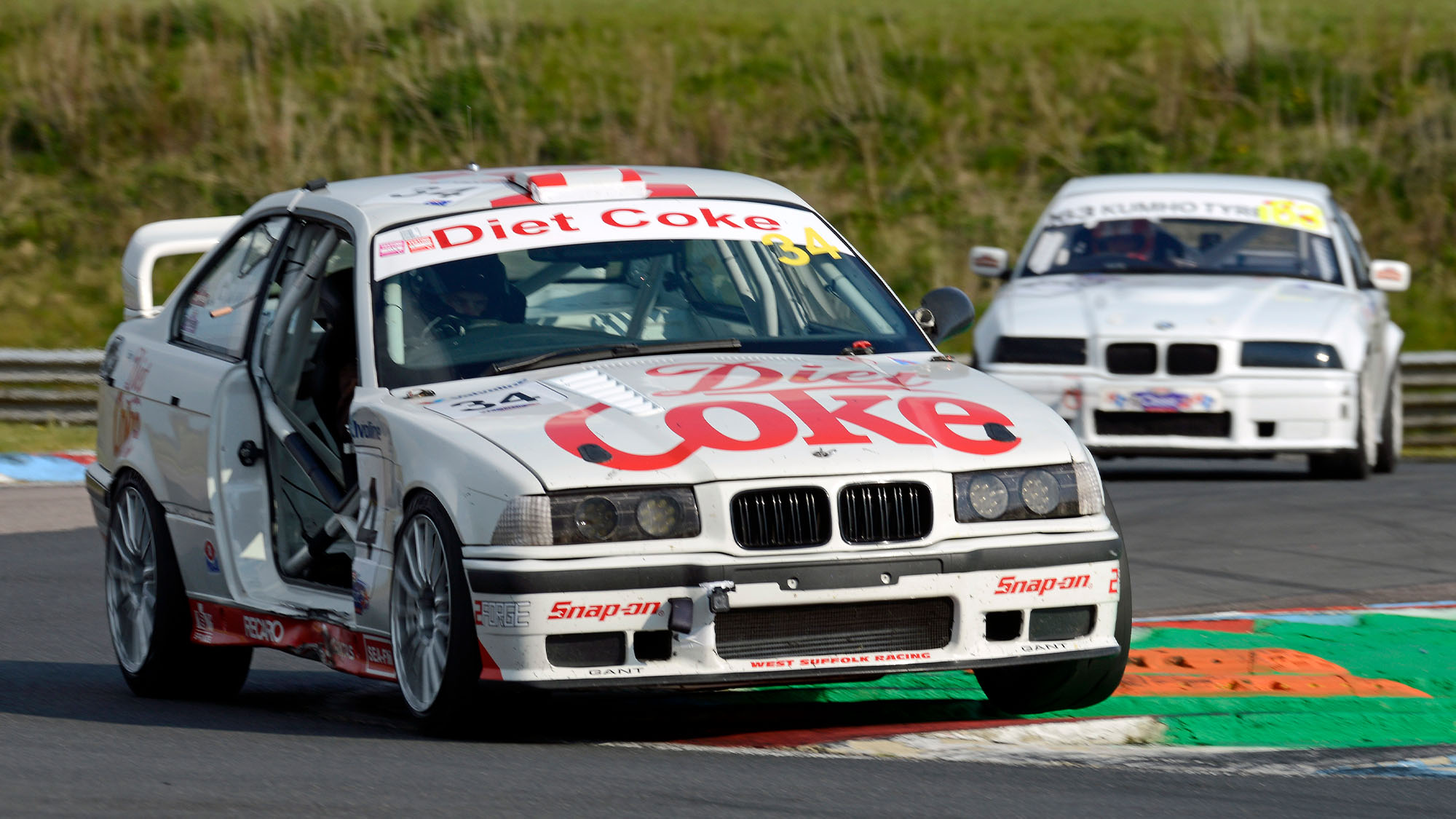 No door, no problem – Dave Griffin went on to win at Thruxton

It will never qualify as one of life’s great journeys, but there is a certain pleasure to be derived from a crepuscular saunter in the general direction of Devon – especially when the A303 is devoid of caravans and other holiday clutter. On quiet mornings it is a brisk, efficient highway, with the added benefit of a charming time capsule by its side. In the distant past you could see cars charging up Woodham Hill, towards the chicane, as you made your final approach to Thruxton; the circuit is somewhat concealed nowadays, but at its heart feels pretty much the same as it did 30 or 40 years ago – it even has a sizeable song thrush population (the species has been in serious decline) belting out tunes from the perimeter hedgerows.

That the CSCC should attract a colossal entry should come as no surprise – and, as ever, a number of drivers took up the option of using the same car in more than one race, such is the fluidity of the club’s template.

Introduced last season, the CSCC Slicks Series (for anything with doors that runs on racing tyres) is still finding its feet, but featured one particularly intriguing car in the form of Chris Everill’s raucous, Chevy V8-engined Ginetta G55 – not something you’ll find in the Leeds manufacturer’s official sales brochure.

Alex Thistlethwayte’s gorgeous Aston Martin DB4 GT looked a little out of place duelling with Ford Fiestas and E30-series BMWs, but its wheel-waving antics were a delight to behold in an era when so many classics have had their natural body language suppressed.

And Dave Griffin (BMW M3) scored a comfortable Modern Classics victory, despite his right door flying off as he headed towards the chicane – a detail that seemed not to make the slightest bit of difference. 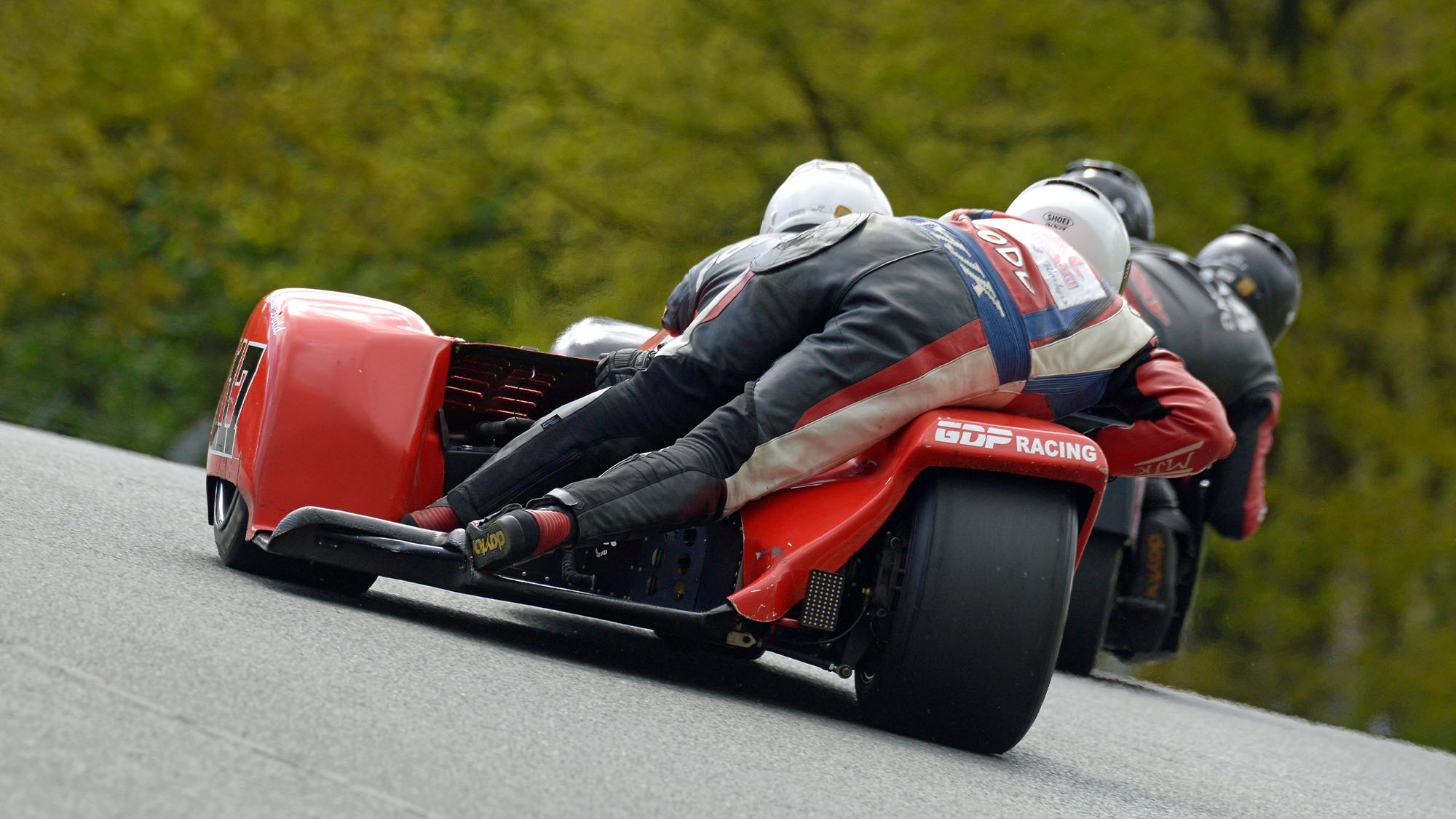 Leaning into the best line at Oulton Park

Time was that heading north from the capital on a Friday was something of a chore, particularly in the days before the M40 was built and the lower slopes of the M1 were in parts only two lanes wide. Then as now, the solution was to leave at about 4am – though in this instance there was an extra incentive for the early start: a Friday race meeting ahead of a non-holiday weekend. 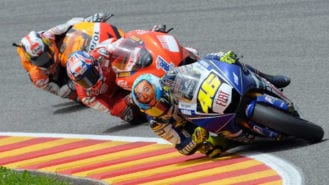 Valentino Rossi rode his first international race at Mugello in June 1995 and may have ridden his last on Sunday. During those 27 years he has twice not raced at…

Despite this being a working day for the majority, the paddock was so full – a custom at BMCRC events – that quite a few riders were based on the adjacent meadow. It’s always enlightening to eavesdrop on the banter, too: “Hello mate, how’s it going? See you out there in a bit. Hope you have a good day.” There is a fusion of rivalry and unity that’s standard on two wheels but somewhat scarcer on four.

The day got off to a hesitant start, not helped when a breakdown in trackside radio communications caused a delay, and sidecar qualifying had to be red-flagged because a hailstorm struck while crews were circulating on slicks. When a few intrepid souls ventured back out with more appropriate footwear, wheelspin could be heard from the far side of the track.

There is a 5pm Friday curfew at Oulton and, in the end, there wasn’t time to accommodate the final four of 12 scheduled races. It mattered not. The sight of powerbikes pulling wheelies through Druids, riders adopting different balancing techniques to maintain control, is one of the most uplifting (quite literally) in UK motor sport.

It had been worth the trip.

I paid my first visit to Donington Park in July 1980, for a non-championship German Group 5 international, so it’s fairly bewildering that more than 40 years should pass before finally I got to watch bikes at the venue.

Science is powerless to explain such idiocy.

As with the BMCRC (see above), NG has a happy knack of attracting capacity entries – and in motorcycle race paddocks that translates as an ocean of vans. There is little pretence here; a few modest campers, perhaps, but for many a Ford Transit will double up as race transporter and sleeping quarters. Any spare cash seems to be reserved for the bike rather than pointless frippery that won’t make it go any faster. 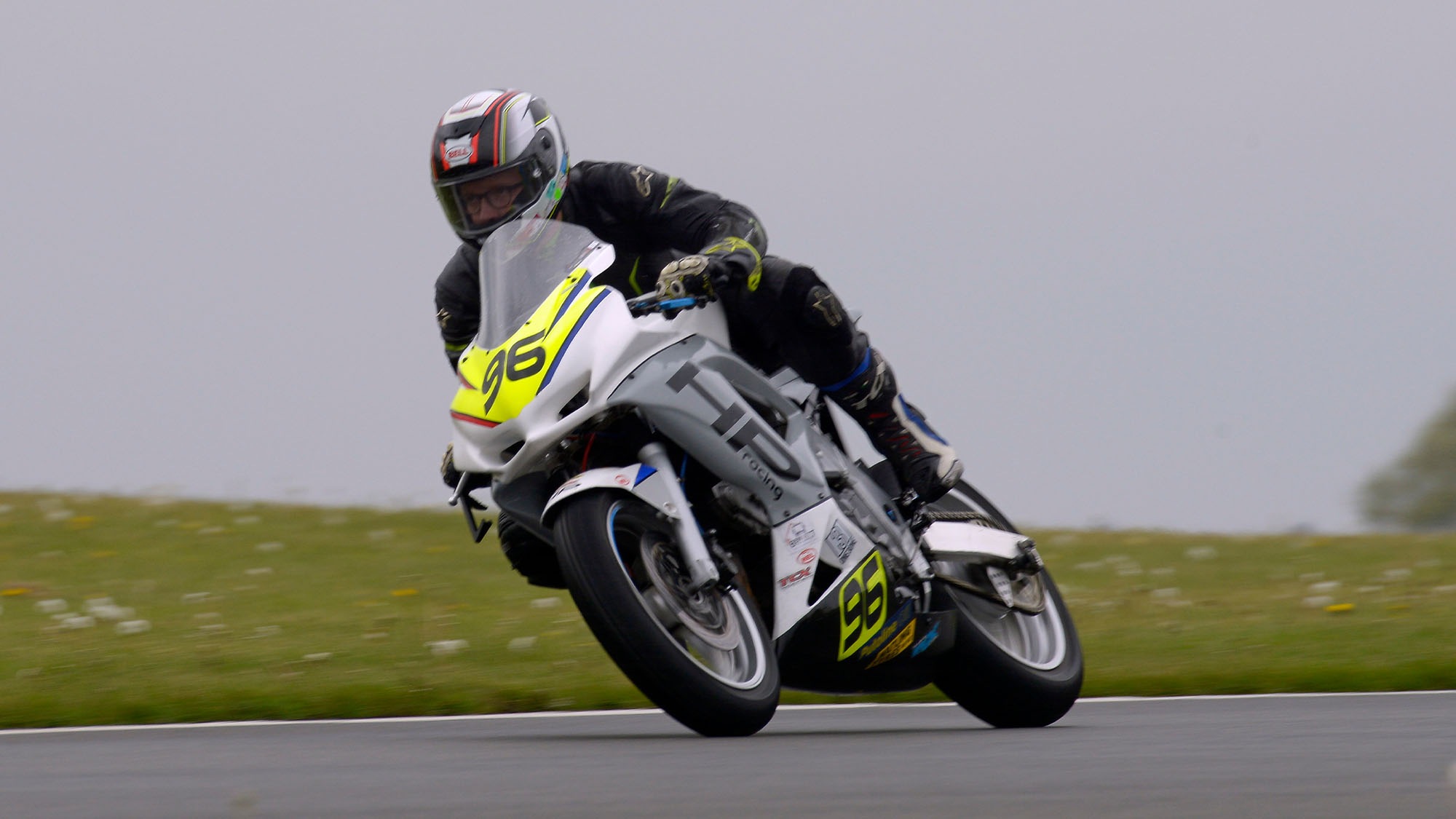 Harris on his way to Mini Twins victory

Conditions were on the slippery side of tricky – NG reported that the Redgate marshals dealt with 29 separate incidents during the day’s course – but the collective commitment remained absolute. Joe Sheldon-Shaw (Suzuki GSXR 1000) won the Powerbike and Open races, while returnee Dan Harris (Suzuki) scored a Mini Twins victory – results that both would repeat the following day.

The sight of sidecars teetering through the chicane was richly entertaining, passengers wrestling to keep their side of the outfit off the East Midlands approach radar, and the quicker riders’ passage through the Craner Curves was both seamless and majestic. I shall endeavour to return for more before 2062.

The British Touring Car Championship has the profile, the TV footprint and a justifiably strong reputation for close racing, but in isolation its cars don’t have the presence of a contemporary GT3. Truth be told, not much does. 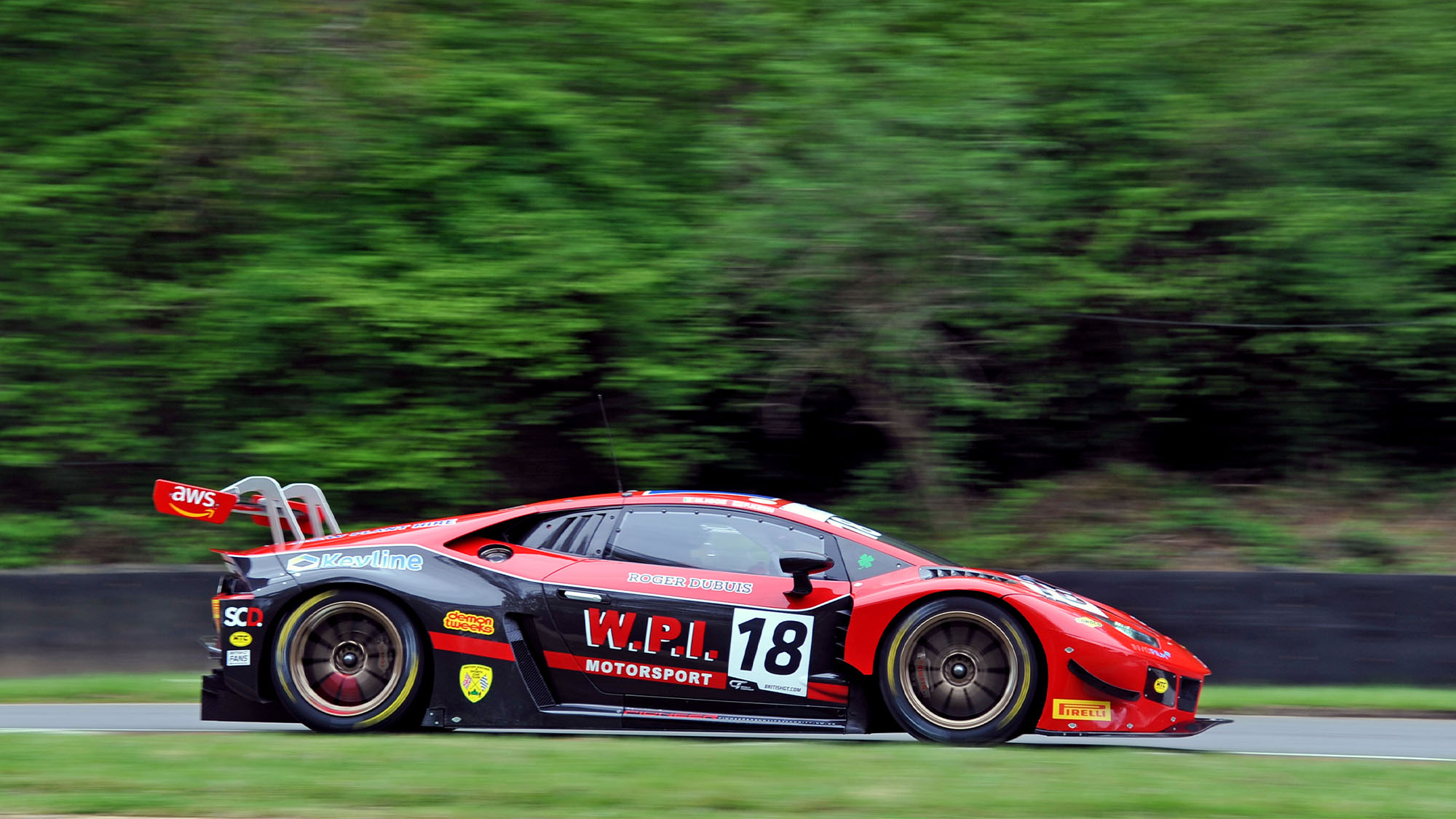 There’s not much that can beat a Lambo at Brands

The opening fixture of the season didn’t feature a great deal of close racing – the WPI Lamborghini Hurácan of Michael Igoe and Phil Keen won fairly easily – yet it was still a spectacle. The sound on its own is ever a tonic, likewise the return of that ancient species the motor racing spectator. It’s a trifle puzzling that only 4000 were allowed to enter a venue the size of Brands Hatch, when Wembley welcomed more than 20,000 to the previous weekend’s FA Cup Final, but logic and governance seem rarely to be bedfellows.

The supporting cast included three BRDC F3 races (the last with a fully reversed grid and commensurately chaotic start), the GT Academy (a new Ginetta series to accompany the other 37 or so) and the clumsily named Porsche Visit Cayman Islands Sprint Challenge GB, which is ripe with technical efficiency but not terribly engaging to watch. For a one-make series to work properly, it is surely important that the cars frolic in the manner of a Ford Escort Mexico or a Renault 5TS? 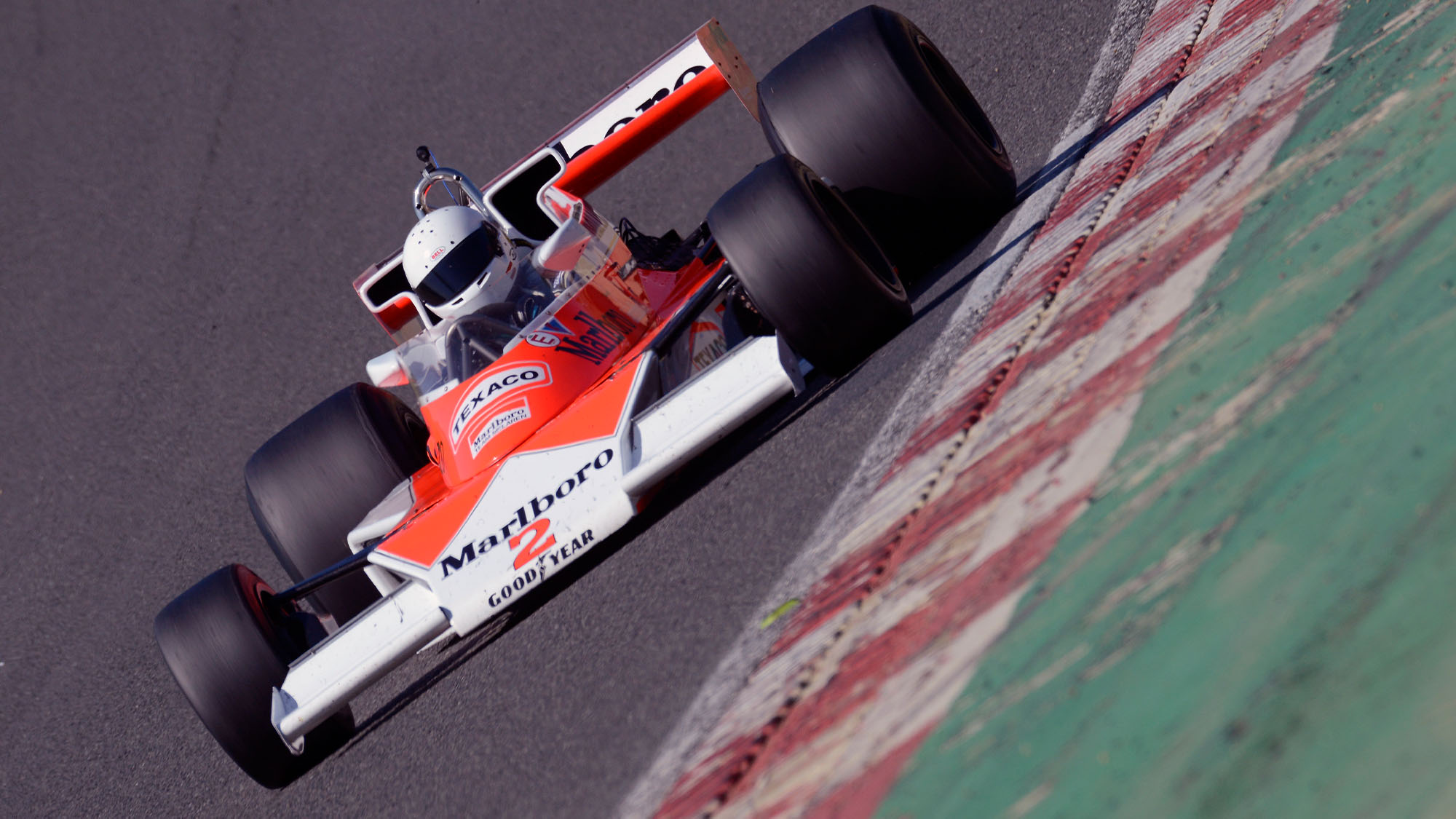 The sight of modern GTs rampaging through ancient Kentish woodland had been invigorating one week beforehand – and the chance to watch Chevron B8s and Lola T70s doing likewise proved to be no less so.

There are some fine venues on the annual Masters Historic schedule, but few things complement older cars quite as well as the extended version of Brands Hatch. 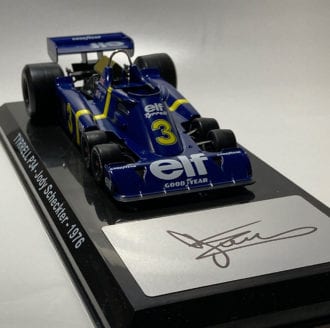 The Historic Formula 1 entry was fairly slender – a number of competitors from mainland Europe withdrew, due to the impracticalities of being hung, drawn and quarantined – but the sound of 10 DFVs approaching is sufficient to stir the soul. Both races featured a McLaren 1-2, thanks to Steve Hartley (MP4/1) and Lukas Halusa (M23), while Warren Briggs (M29) would have joined them on the podium in race one if such things weren’t presently disallowed for reasons of social distancing.

How is it possible that 35 years have passed since Brands Hatch last hosted an actual F1 race? Barely seems 35 minutes…

At the other end of the entertainment scale were the two single-seater demos (both run on Sunday, following delays the previous afternoon). It’s fun to see Greg Thornton’s Coloni C4, which has had a much more fruitful career as a demonstrator than ever it did as a grand prix racer, but four cars – one of them a Formula Nippon Lola that used to masquerade as a Renault R28 but has now been repainted as a Honda RA108 – do not a spectacle make.

For all that antique touring cars no longer wave wheels as once they did, they are still a treat to behold as they slither through Paddock (or most other bits Brands, come to that) – and absolutely every meeting should have dedicated races for pre-1966 Minis.

All in all, a magical history tour.

There are a number of automotive mysteries in the modern world. Why do so many Toyota Prius drivers stick rigidly to lane two on motorways, when lane one lies empty for miles ahead? And why do so many people fail to realise that daytime running lights operate only at the front, which doesn’t make them terribly useful in dense, Kentish fog?

Conditions eventually improved (even if lane discipline didn’t), but life’s minor irritations dissolve instantly when you peel from the A2 onto the narrow lane that leads to the rolling magnificence of Lydden Hill.

Last year’s British Rallycross Championship was seriously stunted by Covid, but the 2021 version began with two events at the same venue in three days in front of a decent – albeit restricted – crowd. 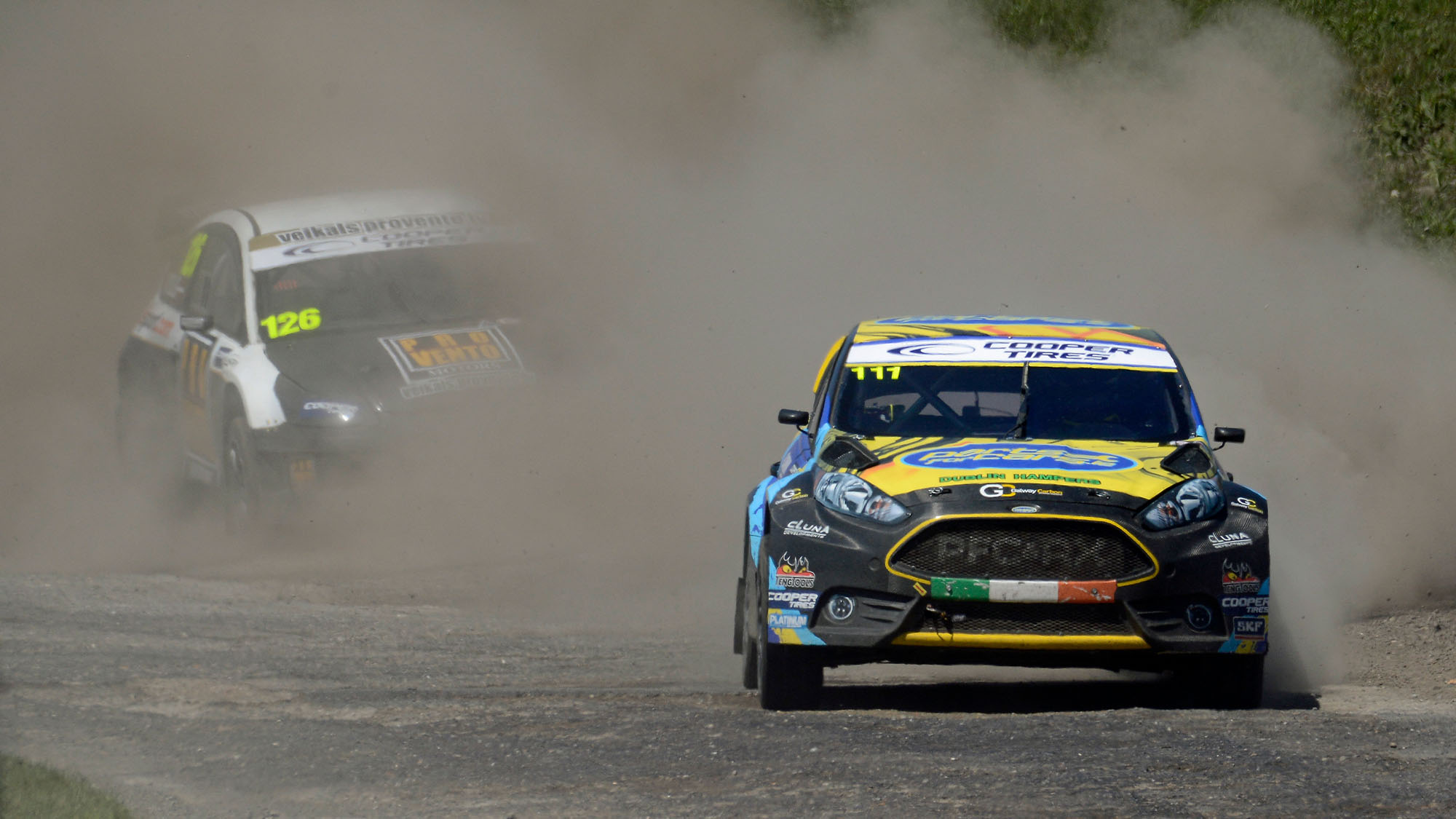 Supercars are the main attraction, of course, and the grand finale produced a fierce contest in the traditional manner. Some of the driving was perhaps overly robust, but Irishman Derek Tohill (Ford Fiesta) was both clean and immaculate of line as he added a victory to his fourth place in round one (won by Latvian teenager Roberts Vitols). 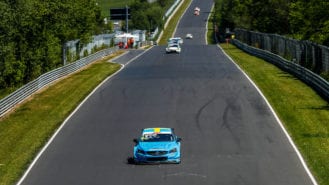 The art of the all-rounder: how driving in different categories makes better racers

When GT specialist Nicky Catsburg got the chance to drive for Lada in the World Touring Car Championship back in 2015, he received plenty of advice not to do it.…

Pole Slawomir Woloch (BMW M3) produced save of the day in the first Supernational qualifying heat. On the verge of losing control as he rejoined the main circuit from the ‘joker lap’ loop, he kept his foot planted, vaulted a grass verge and all but tipped the car on its side before recovering to finish third, having lost only a few seconds.

Stir in the fearless insouciance of the junior drivers (aged 14-17), the cute but silent novelty of electro rallycross (a one-make series for the Fiat 500e) and the beguiling diversity of the retro classes and you have a splendid day out.

The point was enforced by three young kids, noses gummed to the fence alongside the Dover Slope. They appeared to be having a great time, cheering on different cars selected for no obvious reason, when one of them observed, “This is the best day ever.”

Hopefully, a few more of that generation will take heed.