If you are looking at jumping into a motorcycle racing game you aren’t particularly spoiled for choice but there are certainly more options on the market than five years ago. Ride 4 differentiates itself with a sim-like experience at the forefront of the game’s approach.

Ride 4’s focus on realism is paired with fidelity and level of detail that elevates its visuals above any of the competition; the game is unquestionably very pretty. So much emphasis has gone into the looks of the bikes in particular that you can see brake fluid bounce around and wobble in its reservoir in first-person view with each corner. Each bike has been 3D scanned by the team at Milestone and it certainly shows with a level of depth and aesthetic appeal many racing games fall well short of.

This is not a pick-up-and-play kind of game like your other arcade racers though. Ride will demand you first acclimatise to the bike and then not push it very far beyond its boundaries.

The riding experience itself will be a varying one, depending on three things: your persistence, level of patience and experience with motorcycle games. If you picked up a controller expecting to wrestle the bikes under your control then get ready to watch as your rider ragdolls into the gravel trap in a cartoonishly-animated style.

Similar to the developer’s MotoGP 20 title from earlier this year, the experience will depend on the player’s willingness to stay with it as it offers no real helping hand to newcomers, but experienced players will certainly be catered to.

Frustration will definitely arise from the unsympathetic track limits system. The first taste of riding comes almost immediately after pressing the start button and I found myself having several laps chalked off due to touching the white line on the edge of the track surface rather than riding over it onto astroturf. Even clipping the apexes at the wrong angles sometimes gave an invalidated lap time.

It is something of a harsh ‘tutorial’ and maybe it’s kind to call it that. Dumped right into a time trial race around an unfamiliar circuit can be daunting already, but you basically have to figure things out from there yourself, playing with lines and corner-entry speeds, assists and the inconsistent track limit system. It will certainly appeal to one type of player, but will be an immediate barrier for many other more casual players.

The career begins with you selecting either the European, Asian or American league and you progress by completing challenges in each mini-series within. The majority of the challenges facing you though are simple timed events, racing against the stopwatch rather than any AI opponents, with time attacks and overtake challenges very infrequent in comparison. It can lead to a bit of a dreary experience and fatigue of having to race on the same circuits multiple times in mini sections without much variation in goals to complete. From the initial leagues, you’ll progress to the world league before the final stage that splits into endurance or superbikes.

One hugely frustrating factor arising from this format is the decision to have a mini cutscene playout after failing any challenge. For instance, say you are tasked with riding a lap of the Nurburgring GP circuit to achieve as fast a time as possible and run wide at the final chicane, cut over the astroturf and your time is invalidated, You cannot ride around to begin another lap. 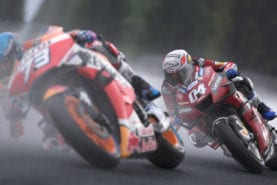 Instead, the game takes away the controls and puts you into a menu to restart the challenge again. It breaks up any flow the game can muster and only frustrates the player as they sit waiting to regain control of the bike on the next attempt having sunk almost two minutes into said challenge already and built up feeling which is undone by the break in play.

Having such long AI-controlled portions is also one of the flaws in general gameplay. Beginning a time trial lap has you sat watching the AI bring you onto the start of your attempt, the starts of endurance races play out without you controlling anything as you watch riders run from one side of the track to the other and then for the first 500 meters of the race itself as riders fly by you and you’re unable to retaliate.

AI riders can behave fairly unpredictably, leaving you to decide whether or not you will be crashing or having to take avoiding action, but largely perform much better than in previous games. Tuning the AI difficulty to your preferred level will make for an entertaining race, with the HUD offering live gaps to the car in front and to the leaders simultaniously, something that is a very small but very welcome feature.

Any track limits infringements will be added to your race time at the end, taking the time gained by running outside of the track and tacking it on to your overall time.

The handling model makes for a challenging experience and mastering one of the 170+ bikes available in the game is a demanding but rewarding one. From track machines to road bikes, endurance-capable or dirt track, there is plenty to get stuck into vehicle-wise.

The circuit list has also been expanded from the previous game to include the likes of Snetterton and Magny Cours. All of the 30 tracks available in the game will be able to be raced in a full day/night cycle or with variable weather, but you’ll only ever get to experience the changing conditions in endurance races. These races can go from half-hour dashes to full 24-hour cycles for the extra dedicated player.

Ride also has a level of customisability for your rider and bikes using a paint tool. Players can get creative with their own designs for helmet, leather and motorcycle meaning you can get as in-depth as you want with how you look on track. You can share your creations online or download the more popular designs from players around the world.

Performance-wise, you shouldn’t experience any major issues with the game. Other than a few instances of frame loss and infrequent stuttering, the game was smooth and those issues will likely be patched out post-launch.

With the learning curve resembling a brick wall, many beginners and casual players will be left floundering and short of the full experience that Ride 4 can actually offer. More experienced players can extract the lap times and appreciate much more than the pretty bikes.

However with that high bar to clear, nailing a lap or overtake is extremely satisfying, particularly if you have been brave and turned off some of the assists you might have used to get to grips with the game in the first place.