Do you loathe electric cars? Does the whine of Formula E make you gnash your teeth? Do you scoff at those celebrity do-gooders on their climate change crusade in Extreme E? It’s so easy to be sceptical. But wait, don’t dismiss the spark brigade too soon. Something else that’s new and plugged-in kicks off this weekend and the cars genuinely sound like a handful. Don’t take our word for it – listen to someone who really should know.

Tom Chilton has been around the block for a lap or three. He’s raced touring cars for 16 years, in both the British Touring Car Championship and the old World Touring Car Championship, and also experienced LMP1 in its pomp, driving Zyteks in Europe and the US. So he’s not easily impressed. But he’s found himself truly blown away by a new adventure he is embarking on this weekend, as part of the factory Hyundai squad that will line up at Vallelunga, Italy in the new all-electric Pure ETCR tin-top series.

Heard of it? Eurosport Events, the people behind the World Touring Car Cup, launched it in February last year, only for the pandemic to shut off its plans. Now it’s ready to roll with multi-car factory teams from Hyundai and Cupra, plus a quartet of Alfa Romeo Giulias from tin-top privateer Romeo Ferraris. Now just check out what Chilton has to say of his early experience of the new Velostar N he’ll be racing from this weekend.

“I did a practice start the other day,” he says. “They sent me to the end of the pitlane and said put your foot on full-throttle and when you let go of the brake, off you go. I did all the procedures and it was really quiet. I looked down to make sure all the lights were switched on, then I counted in my head ‘three, two, one’ and let go of the brake. I’m not joking, I got to the first corner at Vallelunga in about a second. It was ridiculously fast, I couldn’t get over how it accelerated. Wheelspin all the way. I’ve driven Teslas, but this is far faster. We’re looking at 1.8, 1.9sec to 60mph…”

At the launch last year, Pure ETCR’s (slightly scary) racing boss Francois Ribeiro made the priorities all too clear – and he wasn’t afraid to have a dig at Formula E, even if both series are owned under the same umbrella of the Discovery Group. Sibling rivalry? Juicy.

“Formula E has been very good, but it promotes technology, not product,” he said. “Touring cars are a great tool for manufacturers to promote their products, not technology. Motor sport can play a role in changing perception. And we’re motor sport promoters, not an advertising agency. We want high-performance cars with big wheels and plenty of power, to be good looking and – we hope – driven by the best touring car drivers. We want to promote the performance of electromobility.”

“The tyres are melting beneath you and you’re saying to them ‘I’m sorry!’”

He also made it clear he’s not interested in creating motor sport to “save the planet”. Take that, Señor Agag and Extreme E.

What this means is a bunch of touring cars boasting the equivalent of 670bhp, on tyres that are close to road-spec, from a 798V Williams Advanced Engineering battery built to be financially efficient even if its power won’t last long before it needs recharging from hydrogen fuel cell rigs. The lack of range? Who cares? Ribeiro wants all-or-nothing performance, so that means short, sharp, crash-bang-wallop, rallycross-style circuit races out of a snazzy start gate that looks straight out of a Hot Wheels loop-the-loop toy set.

“It’s a really good piece of kit to drive, really exciting,” enthuses Chilton, who will be teamed with fellow touring car specialists Augusto Farfus, John Filippi and fast Frenchman Jean-Karl Vernay, winner of the recent World Touring Car Cup opener on the Nürburgring Nordschleife in prolific Hyundai’s new Elantra N TCR racer. “Our Velostar N ETCR’s incredible considering it weighs 1800kg and is effectively on road tyres – Goodyear’s Eagle F1 Super Sports. Where I brake is not far off where I would on slicks, in a car that weighs 500 kilos less. It’s extraordinary. The problem is when you go to turn!” 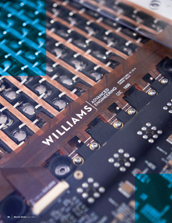 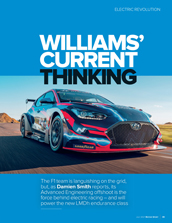 How Williams has become the force behind electric racing

There's something binary about Williams in the modern world. In the unflinching glare of the Formula 1 spotlight, the race team is reduced to a sadly emaciated ‘big beast’ of…

Chilton is an old-school racer, but is ready to embrace an electric future – if cars can be this much of a handful. “Obviously it doesn’t have the noise of an engine and all you hear from the tyres is ‘errr, errr, errr’! The tyres are melting beneath you and you’re saying to them ‘I’m sorry!’ Then you think, I’ll just apply a bit of throttle with 900Nm of torque coming out of the rear wheels and 500 kilowatts on full beans, which is 670-ish bhp…

“One of the main differences is it doesn’t have a solid rear axle like you have on a normal race car. It’s just got two electric motors on each side powering it individually, and the traction control is very basic. Williams Advanced Engineering is in control of the batteries and the technology and we’ve done no testing with it. It’s the same for everyone, we’ve all got the same traction control, but it’s not what I’d call high-tech. So it will wheel-spin quite a bit before it cuts out, and you get this high-pitched squeal as the inside wheel spins crazy out of control and becomes unloaded because there is no diff to help it.

“It’s amazing really because you get a whole different sensation with the noise and the way it puts down power one wheel at a time. I’ve been racing a long time now, but I’ve never raced something this heavy before. Even all the championships I’ve raced in where they try to slow you up with 75 kilos of lead I’ve never been anywhere near this weight. It’s extraordinary how fast it is.”

It’s just as well too that Chilton’s ‘day job’ is racing another rear-wheel-drive machine in the BTCC, and he says it’s not a coincidence, having joined Cicely Motorsport to race its new WSR-built BMW 330i M-Sport beside team-mate Adam Morgan this year. “When I realised I’d be doing two different championships in 2021 I realised it was very important to drive cars which were powering the same axle – as in the rear, not the front,” says Tom. “So I went rear-wheel drive for the BTCC to match Pure ETCR. That really helps me. You’re not going to think I’m just going to floor the throttle to pull the front round, because that would obviously spin you… So I’ve got all the same feelings and it keeps me on my toes.

“I love the fact it’s all so different. When I’m sat in the Pure ETCR pit garage I’m staring at a hydrogen fuel cell which is recharging the batteries in my electric car. It’s the future, it’s cool and exciting. I’ve done touring cars for 16 years, so it’s so nice to do something different.”

Still reading? C’mon, keep an open mind. In the Cupra corner, former DTM champion and rallycross ace Mattias Ekstrom lines up alongside Spanish veteran Jordi Gene, while versatile Brit Oliver Webb is a relatively late addition to Romeo Ferraris’ Alfa line up. Like Chilton, Webb wants more electric propulsion experience because he knows it’s a key part of motor sport’s future. Five rounds will be held for this inaugural Pure ETCR season, including a street circuit round in Copenhagen and a finale in South Korea.

“I’m one of these guys who loved it when you could feel the vibrations through your feet and into your chest with all the noise of a powerful engine,” says Chilton when it comes to addressing the naysayers. “But as much as I’ve driven and won races in a couple of LMP1 cars, there’s nothing that accelerates as fast as an electric car. It’s instant. I admit, the electric motor does sound like my kids are whining in the boot – which is what I go racing to get away from! – but it suits my driving style and I’m working with fantastic team-mates. Farfus and Vernay are very well established drivers and it’s nice to be compared to them.”

Bags of power, limited grip from tyres designed primarily for road use and cost-efficient, relatively unsophisticated technology? Apart from the electric whine, that sounds for all the world like a slice right out of the old days…