Louis Rosier is a nominee for this year’s Motor Sport Hall of Fame Awards, which are decided by readers.

Like so many sportsmen of his generation, Louis Rosier lost some of his best years to the war. But after serving with valour as a member of the French Resistance, he became a national hero of another kind when in 1950 he almost single-handedly won the Le Mans 24 Hours – and in a French car, too. In a period dominated by Italian machinery and an emerging generation of new international drivers, Rosier kept the French end up – just as he had on that day, night and day at the Circuit de la Sarthe.

He was also a true blue privateer, who relished taking on the factory teams and defeating them on his own terms – which is why he makes our list as a nominee for the 2020 Motor Sport Hall of Fame. His most famous victory is a case in point.

Rosier entered a Talbot-Lago T26 GS under his own steam for the first Le Mans 24 Hours of the 1950s, with a plan to share the driving with his son Jean-Louis. As it turns out, the lad didn’t get much of a look-in. A long delay in the pits early on Sunday morning cost Rosier a hard-earned lead, and after Jean-Louis completed just two laps, Pere returned to the wheel and single-handedly charged back to a famous victory, receiving a black eye along the way after hitting an owl. No wonder his nation loved him.

But Rosier should also be recalled as a handy grand prix driver, too – again as a committed privateer. During the 1930s he owned a garage in Clermont-Ferrand and began racing first on motorcycles, before switching to four wheels for hillclimbs just before hostilities broke out. When peace returned, Louis resumed his racing ambitions in a self-run Talbot-Lago T150SS. He’d win at Albi in 1947 and finish fourth in the French Grand Prix.

For 1948, a T26C single-seater run under his own Ecurie Rosier banner would carry him to a fourth place at the first British GP at Silverstone and a victory in the GP du Salon at Montlhéry. The following year, after going one better at Silverstone to finish third, Rosier claimed the other great victory of his career. At Spa he was entered by the works, against more powerful but thirstier supercharged Ferraris and Maseratis, and by running non-stop he beat them.

Taken from the August 1997 issue of Motor Sport When I was a kid, someone gave me an EP – remember them? – of the BRM V16 on full noise.…

At the dawn of the world championship era in 1950, Rosier added to his Le Mans success with a pair of third places at the Swiss and Belgian GPs, his consistency rewarded with a respectable fourth in the inaugural standings, behind only the Alfettas of the three Fs: Farina, Fangio and Fagioli. He also won the non-championship Dutch GP when the Alfas were absent to cap a glorious season, the finest of his career. Again, what might he have achieved without the war demolishing all of normal life for six torrid years?

As the decade progressed, he would be forced to buy Italian, running Ferraris and from 1954 a Maserati 250F, finishing fifth in his last world championship race, the German GP, in ’56. Now aged 50, he won the Paris 1000Kms at Montlhéry that same season with Jean Behra in a Maserati 300S. But back at the Paris circuit later in the year for the Coupe du Salon, he’d clip a bank driving a Ferrari 750 Monza, overturn and suffer severe head injuries from which he’d succumb three weeks later. A four-time champion of France, the nation that gave the world motor sport as we know it today had lost one of its greatest heroes – on and off the track. 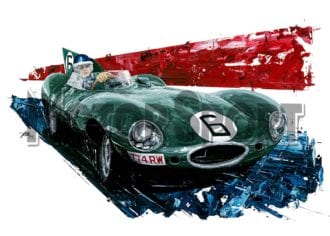