When crazy-keen American historic racer Jonathan Holtzman’s attempts to buy a Tyrrell P34 were thwarted, he posed the six-wheeled question: ‘Why can’t we just build one?’

Last weekend at Brands Hatch’s Masters Historic meeting he gave his ‘continuation’ – designated chassis 9 – its competitive debut, qualifying eighth on the 13-car grid, within 0.4sec of the fastest entry in its class for post ’72, non-ground effect cars.

Both races ended in a tight finish with the Surtees TS16 of classic car dealer Marc Devis. Holzman won the battle in race one, finishing ninth out of ten finishers, setting fastest lap in class. He then lost out to Devis in the final race by just over a second to cross the line last of the finishers.

CGA Race Engineering of Warrington built the car – with the Tyrrell family’s blessing – using approximately 230 original drawings – some in designer Derek Gardner’s hand and all digitised by CGA’s Simon Harris – plus laser scans of Richard Mille’s (then disassembled) 1977-version chassis 6 and the purchase of the largest scale model available on the internet.

“We had to contact Boeing because only they had sheets of aluminium large enough for the chassis,”

“Jonathan couldn’t have picked a more difficult car,” says project co-ordinator Alistair Bennett. “But that’s him: he loves the details.

“The 1976 Autocourse says that one of the major hiccups with P34 was how difficult it was to build each chassis. Dad [Colin] took great pleasure in reading that out as our first tub went more than six months behind schedule.”

CGA wisely called upon vastly experienced designer/engineer John Gentry to ensure that this complex build – from its first ground-up chassis drawing – was “blunder-proof”.

“My first thought when I heard about it was, ‘Well, good luck with that’,” says Gentry, who joined Tyrrell in 1977 as part of the team creating P34’s conventional replacement, 008. “I’d been sceptical about the six-wheeler – interested in its concept but glad that somebody else was doing it.

“When it did well immediately in 1976 we were all thinking, ‘Christ! We’ve got to build one now.’ That front end brought with it a lot of complication and problems.”

Basically everything behind the rear bulkhead is pretty much off-the-shelf, whereas everything ahead of it is bespoke.

It was decided to recreate the car in the specification used by Jody Scheckter and Patrick Depailler when scoring the model’s famous 12-wheeled 1-2 at Anderstorp’s Swedish Grand Prix on 13 June 1976.

No effort was spared in a bid for accuracy – Cosworth specialist Geoff Richardson supplying a correct-spec’ DFV – and every effort has been made to use period materials.

“We had to contact Boeing because only they had sheets of aluminium large enough for the chassis,” says Bennett. “And even they had to check that they had enough in stock before they would release any to us.”

Construction methods, however, have changed: for example, the electronic surface model of the nose, including the cutouts behind, was sent to a CNC router so that the finished product could be made from a single tooling block.

“We have excellent partners and a very good supply network years in the making; the fuel cell is the only complete part we’ve had to source from abroad,” says Bennett. “Basically we find it more beneficial to have a design-engineering function that can subcontract – for about 75 per cent of this car – from a drawing. (Had I known how much we were going to do I might have set up a machine shop. We have, however, invested in 3D printing.)

“But there remains an element of the fabricator’s eye. Design decisions still to be made. Not many, but enough: fiddly brackets that will never be seen and for which no drawings exist.”

So Gentry visited Stable Fabrications of Towcester to cast an expert eye over the chassis’ build.

The completed car was shaken down by James Hanson at Pembrey last month. The Bradford-based racer, who has been involved with this project from its outset, has driven more than 30 such cars from this era, including March’s 2-4-0 six-wheeler.

“From the very first lap the P34 gave you the confidence that it was going to look after you and encouraged you to push on,” he says. “At low speed it’s slightly vague in terms of placing it – I still haven’t figured out which set of wheels to aim at the apex – but it’s probably best not to over-think it.

“It’s very stable in the quick corners. Because of those small sidewalls it responds more quickly to steering inputs than do four-wheeled cars.

“Its braking isn’t quite as good as you would anticipate given the amount of rubber it has on the road. The front starts to sit up slightly rather than dig in at the end of the long braking zone; it pivots a bit like a seesaw around the middle axle.

“But because it accelerates so quickly – and keeps on going – you should be able to drop the other cars on the straights, making it harder for them to pass.

“In comparison the six-wheeled March stopped really well but was slow in a straight line. It felt like it had too much drag and friction in it.” 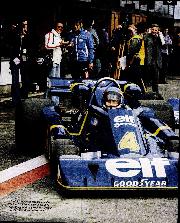 The six-wheeled Tyrrell P34: Two too many

"I actually had the idea back in 1968 but for a completely different application." The words belong to Derek Gardner, designer of the Tyrrell Project 34, one of the most…

Hanson completed more than 100 laps over two days, including a 25-minute race simulation. The Avon fronts were fading slightly towards the end of the latter but the car has since been fitted with adjustable Koni dampers in place of stopgap motorcycle units.

“That’s improved it even more,” he says. “But after three laps of Pembrey I’d already told them that it was pretty much ready to race. It was that good.

“It would be very difficult to choose between the Tyrrell and a McLaren M23. Any such decision would probably be circuit-specific.

“CGA has done a brilliant job down to the last rivet. If Derek Gardner stipulated titanium for a radiator stay, that’s what this car has. Aluminium would have been cheaper and easier – but that’s not the point.

“The only difference is that we have to run steel roll-hoops these days.”

Says Gentry: “Outwardly these cars are identical to the original. But under their skins it’s always wise to try to produce a safer version, and if you can erase certain problems, fair enough. There’s no point repeating errors. That would drive you crazy. However, this should not be out-and-out modern racing with historic cars.”

Hang on a second. Did he say ‘these cars’?

Yep. If you can build one, why not build two? Hanson reckons that chassis 10 is approximately six weeks from completion.

This will be put up for sale should you fancy playing Depailler to Holtzman’s Scheckter.