Dickie Meaden’s driven many Porsches, but none quite like this. He joins the Goodwood Members’ Meeting GT1 demo in the 911 GT1-97 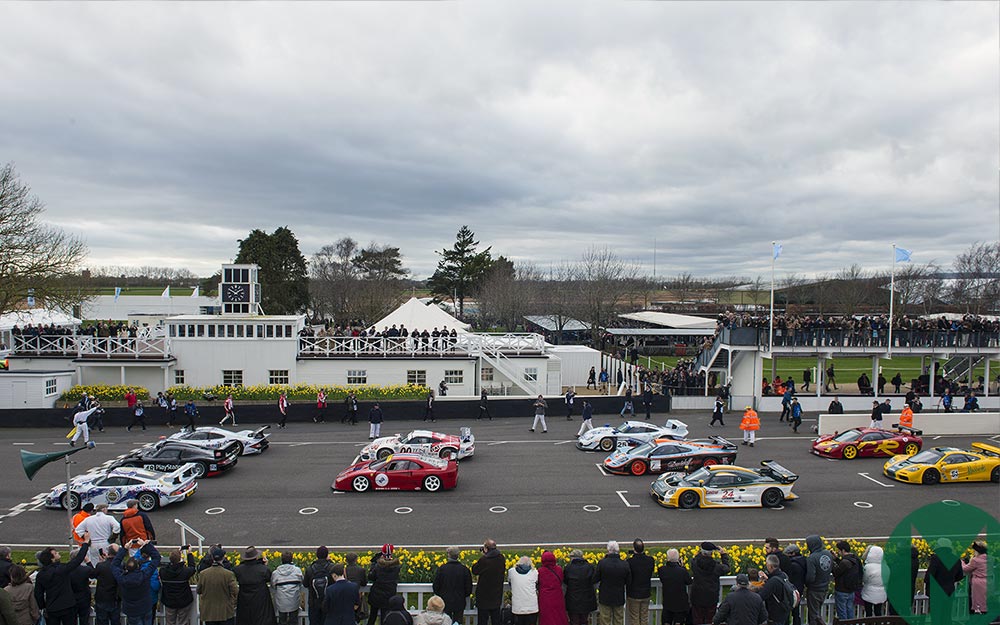 Having a properly daft job often results in doing properly daft things. Still I’m struggling to recall anything more surreal than jumping out of a Lotus Elan (in which I’d just qualified for the Graham Hill Trophy), running the length of Goodwood’s paddock – from parc fermé to the assembly area – clambering straight into a Porsche 911 GT1-97 Evo and immediately heading out on track as part of the Members’ Meeting Saturday GT1 demonstration.

To say stepping from the tiny, lightweight ’60s sports car into downforce-drenched, boost-laden late-’90s monster was a culture shock is something of an understatement, but when you’re asked if you’d like to have a go in an ex-works Porsche Le Mans car you say ‘yes’ in a heartbeat. Never mind that you sat in it for the first time just over an hour before to check you can reach the pedals.

One of the (very) few factory-run GT1s to escape Porsche’s clutches, this is chassis 004: owned by collector Aaron Hsu and driven by Bob Wollek, Hans Stuck and Thierry Boutsen in the 1997 Le Mans 24 Hours. It qualified first of the GT1 cars and second overall, 1.8sec behind the TWR-Joest WSC 95 prototype, but 2sec clear of the Nissan GT1 in third. In the race the #25 Porsche ran at the front of the field with its sister car, but in an uncharacteristic show of poor form, neither of the two factory-entered 911 GT1s finished the race, leaving the way clear for the TWR-Joest WSC 95 to score an historic second successive victory.

The GT1-98 would exact revenge the following year, but the 1997 GT1 Evo is no less remarkable a car. One that in truth owes little to Porsche’s iconic rear-engined 911 sports coupe and more to the 962 Group C car from which its mid-mounted 3.2-litre turbocharged flat-six was derived. Its cartoonish looks only heighten its appeal, but the width of its track, seriousness of its aerodynamics and guttural-sounding engine ramp-up the intimidation factor. Still, at least Goodwood’s a slow and forgiving circuit… 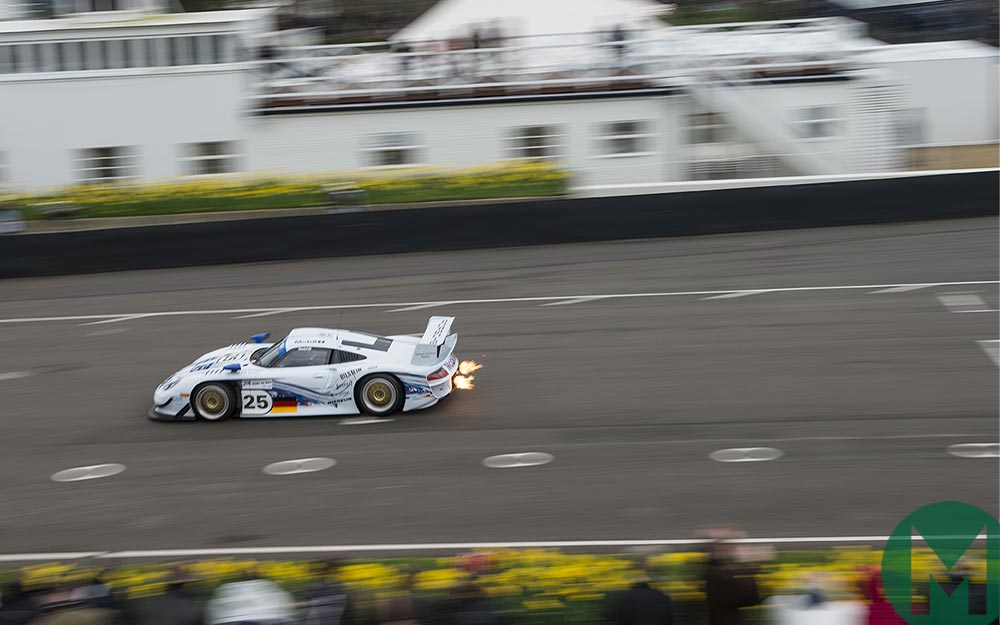 The looks and powertrain belie a car that’s actually very simple and old-school to operate. For starters it has a clutch pedal and a manual H-pattern six-speed gearbox. Both require meaty inputs but reward with delicious precision. You start the car with a key. Or at least a kind of key. The brakes have ABS, but there’s no traction control. As we’re waved out onto the track my mouth goes dry and my palms go moist.

The demo only lasts 10 minutes. That’s why the car’s preparer – Paul Lanzante – has stuck #25 on race wets, rather than slicks. I’m glad of the added confidence they bring, for I so want to dig into the boost and feel what it’s like to be shoved between the corners by 600bhp without fear of cold compounds struggling to contain the torque. The motor snorts and shuffles as the turbos begin to spool, then hardens in note as it hits its stride. Each upshift elicits a chirruping sneeze from the wastegates and two big flames stab from the exhausts in the pause before you slot the next gear home.

Each lap gives a brighter and more vivid snapshot of what is a truly epic car. One that must have felt sensational at Le Mans, but would have taken some holding onto. I’m glad the track has had a chance to dry after the overnight rain. The brakes are sharp and intolerant of modest commitment. That makes heel-and-toe downshifts tricky (no automated throttle blips here!), but the sense of satisfaction when hands and feet successfully match road speed with engine speed is tremendously rewarding. Despite the sci-fi looks it’s a surprisingly analogue car.

You don’t tend to notice Goodwood’s bumps in a period racer on treaded rubber, but a stiffly suspended downforce car like the GT1 doesn’t have the same compliance, so it skips and bounces on the approach to Madgwick. That said you can really feel the wings and underbody begin to suck the car onto the track through Fordwater and the rush towards St Mary’s, the nose responding to small squeezes of steering input as though nailed to the tarmac.

Ten minutes seemed like a painfully short allocation before I got in the car, but now safely back in the paddock it feels like the perfect duration: enough laps to get a tantalising taste of the 911 GT1’s performance and character, but not enough to get over-confident. It’s been an amazing experience. One made all the more special by sharing the track with other GT1s. The sight of the Harrods McLaren F1 up front and a Ferrari F40 in my mirrors is something I’ll remember for a very long time.