One of the largest Jaguar E-type gatherings is assembling this weekend at Shelsley Walsh to mark the 60th anniversary of the legendary car’s launch.

The oldest E-type in existence will be among the cars on show, which include all 13 types of model built during the car’s 15-year production run.

The historic hillclimb is set to be packed with E-types racing up the course, and they’ll be joined by a fleet of Minis, as the E-type 60 event adopts a Swinging Sixties theme, complete with live music, Mods on scooters and specialist exhibitors.

Taking place on Saturday and Sunday, the hillclimb will be opened on both days by 9600 HP, which was built as a prototype and spent its early days in the hands of development engineers, pounding the M1 at high speeds.

It returned to the M1 for Motor Sport’s road test, carried out by Bill Boddy, who estimated that he reached 155mph.

That pace was tested ahead of the 1961 Geneva Motor Show when the car was driven at high-speed to Switzerland, where it was due to appear on the stand, after a delayed departure from Coventry.

It arrived with minutes to spare, and later took on another starring role when Stirling Moss used it to open Britain’s first automatic car wash.

Also appearing at the show will be the cars raced by Graham Hill and Roy Salvadori at Oulton Park in 1961, as well as the first production convertible E-type, one of the earliest V12 models and the very last car off the production line: a Series 3 V12 convertible,

The E-type used by Denis Jenkinson to dart between European races as Motor Sport’s Continental Correspondent will also be there.

A recreation of the robbery scene from the Italian Job will be staged on both days, with Mini Coopers joined by an Alfa Romeo police car and the E-type Roadster that appeared in the film.

Philip Porter, the Jaguar historian, who owns 9600 HP and co-founded the event, said: “E-type 60 is designed to be a fitting tribute to the sensational E-type and a fabulous celebration of the car and the period into which it was born, a period when people and cars could be free spirits.”

More information and tickets are available on the E-type 60 event website. 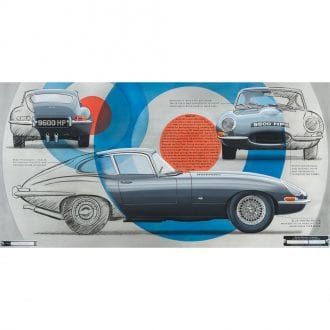