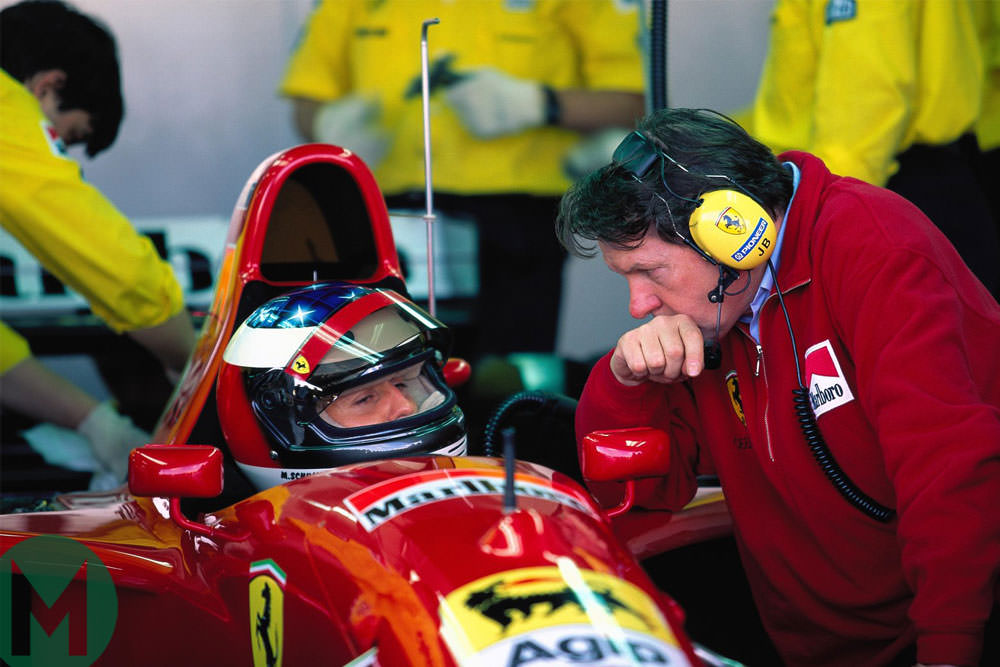 In another Race Retro first, legendary Formula 1 designers John Barnard and Frank Dernie will appear on the Motor Sport Live Stage at Warwickshire’s Stoneleigh Park on Saturday 24th February. They will be talking about their careers, the cars they influenced and how their designs are still used in modern motor sport.

John Barnard is credited with the introduction of two new designs into F1: the carbon fibre composite chassis first seen in 1981 with McLaren, and the semi-automatic gearbox which he introduced with Ferrari in 1989.

Starting as a junior designer at Lola Cars in 1968, Barnard joined the McLaren Formula One team in 1972 and remained for three years working alongside Gordon Coppuck on the design of the Championship-winning M23 chassis and other McLaren projects, including the team’s Indycar.

His success in the United States brought Barnard to the attention of new McLaren team boss Ron Dennis, and in 1980 he joined the team and began working on the McLaren MP4 (MP4/1), the first Carbon-Fibre-Composite (CFC) chassis in F1, alongside the Lotus 88 designed by Colin Chapman.

During his time with the team McLaren became the dominant force within F1, taking drivers titles for Niki Lauda in 1984, and Alain Prost in 1985 and 1986, with the first two seasons seeing constructors honours and the team narrowly missing out to Williams in 1986 for a third. By the time Barnard left McLaren for Ferrari at the end of 1986 his cars had won 31 Grands Prix for the team.

Joining Ferrari in 1987, Barnard spent two years pioneering the electronic gear shift mechanism – now known as a semi-automatic gearbox – which Nigel Mansell took the new V12 powered Ferrari 640 to victory first time out at the Brazilian Grand Prix in Rio de Janeiro. Barnard had instigated his second technical revolution, and by 1995 every team was running a copy of the Ferrari gearbox.

After a brief spell at Benetton at the start of the 1990s, Barnard returned to Ferrari until 1997, with the designer’s F310B chassis taking Michael Schumacher tantalisingly close to the title and his victory at the Japanese Grand Prix was to be the last for a Barnard car.

Frank Dernie studied engineering at the Imperial College London university where he developed suspension geometry software that was seen by senior engineers of the Hesketh F1 team.

He joined the Hesketh F1 team for 1976, and at the age of 26 designed his first F1 racing car, the 308E. Frank was the first racing car designer to develop software to aid F1 car design.

Frank Williams hired him to join Patrick Head at Williams in time to design the successful FW07 and FW08 cars. He also invented active suspension for use on the Williams car and developed their wind tunnel facility to improve aerodynamic development. He was the only person developing aerodynamics at Williams during this period.

In 1989, Dernie joined Lotus as Technical Director but with a lack of funds for research and development, Ross Brawn, who had worked with Frank at Williams, encouraged him to join Benetton for 1991 where he was instrumental in the development of the car, but in particular to improve the race team.

Dernie worked for Ligier and Arrows before he left F1 to join Lola in order to help the team re-establish itself but returned to Williams in 2003 as a consultant engineer for the next four years, before moving to the Toyota F1 team in 2007 as a consultant on ‘aerodynamic and chassis related matters.’

Motor Sport Hall of Fame Live hosts show-stopping displays of iconic cars including a celebration of the 40th anniversary of the ground-effects era, a tribute to David Richards and Prodrive, 30 years of Jaguar at Le Mans, and Porsche’s continued commitment to motor sport.

Tickets are now on sale for Race Retro, held from February 23-25 2018 at Stoneleigh Park, Warwickshire, with free parking for all visitors. For the latest updates and ticket information, visit www.raceretro.com.