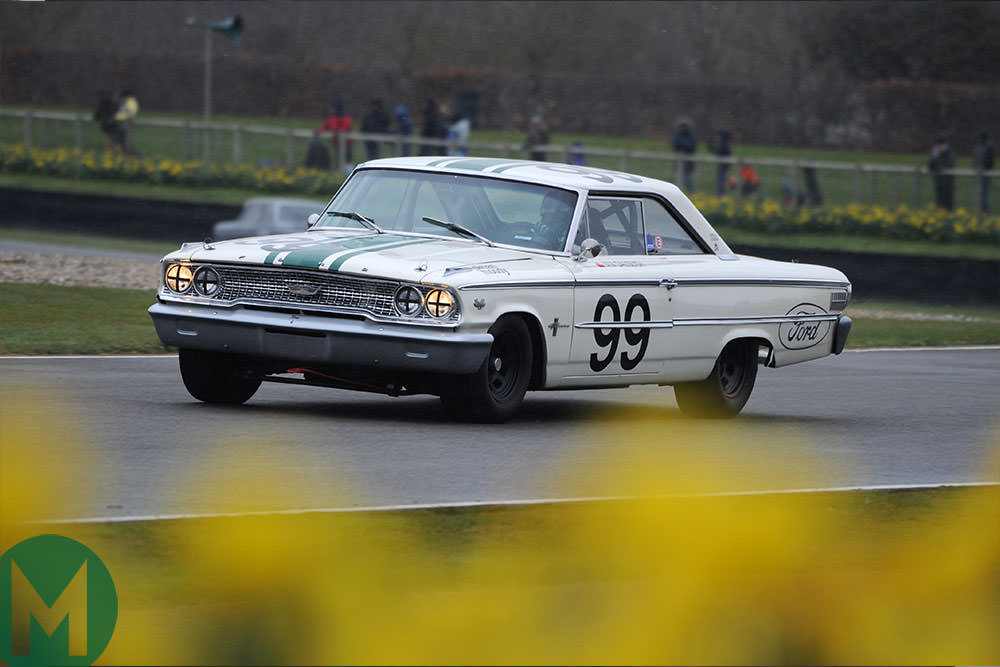 The text arrived at 23:20 last Wednesday night. “D, Galaxie drive this weekend?” And so began one of my more surreal racing opportunities: a last-minute race drive in a Ford Galaxie at the 76th Goodwood Members’ Meeting.

The Galaxie was entered by its owner and regular pilot, Ian Dalglish, in the Sears Trophy – a one-driver race for pre-66 Touring Cars. That means everything from waspish Mini Cooper Ss and tail-happy Lotus Cortinas to snorting Mk2 Jaguars and a couple of other colossal 7.0-litre Galaxies, which all have a right old dust-up20-minuteminute sprint race.

I’ve watched the big Fords compete many times, but until shortly before the start of the Sears Trophy qualifying session I’d never so much as sat in one. With the wet track almost at the point of freezing, my Galaxie learning curve promises to be vertical.

When the signal comes to file out of the Assembly Area onto the track I pull the hefty gear lever left and forwards, kerchunk it into first and slither out towards Madgwick. The track is unbelievably slippery and the poor rear tyres don’t have a hope of transmitting 427 cubic inches-worth of torque, so the barn-sized Ford shimmies and slides its way through second and third gears. It even lights them up in fourth on the both straights. I’m grateful for the long travel throttle – analogue traction control, sixties-style.

I quickly learn you don’t so much tell the Galaxie to change direction as persuade it, ideally initiating the negotiations a hundred metres before you actually want it to turn. Thankfully the large diameter steering wheel means you’re not applying turns and turns of lock, but it’s an odd sensation, like steering with satellite delay.

With so little grip the qualifying session is more like survival than getting a proper feel for the car, but it seems benign enough, so long as you’re prepared to steer with your right foot as much as your arms. I end up 14th on the grid, just half a tenth shy of Bill Shepherd in the quickest of the three Galaxies in the race. That’ll do for me.

Related: On track: Race of Remembrance

Come the race the temperature remains just above freezing (a good few degrees below if you account for wind chill), but the track is at least dry. That’s excellent news when you have a healthy 500bhp to deploy, though I am rather concerned about how to get the beast off the line. Likewise judging my braking points will be a bit of a leap in the dark.

Row 6 is right in the heart of the grid and I’ve got a Jag immediately ahead, Shepherd’s Galaxie to my left and Minis directly behind. As the starter’s flag drops I try to feed the clutch in with as few revs as possible, but still the wheels break traction. It’s not a bad start though, and judicious throttle work sees the Ford’s bluff nose push by a few Minis into Madgwick.

The jostling pack is bunched for the first half of the lap, so although I should be able to monster by on the rush towards Fordwater, there simply aren’t any Galaxie-sized gaps to go through. Up ahead the Cortinas of Andrew Jordan, Steve Soper and Andy Wolfe are having a right old ding-dong, Soper leaving the track at No Name and rejoining like a bucking bronco at St Mary’s.

It splits the pack and leaves a few cars vulnerable to the Galaxie’s warp speed charge from Lavant to Woodcote. Once the old bus is in fourth gear it’s honestly like pushing a fast-forward button. You devour Minis like bits of popcorn. The Jags take a bit more chewing, but even they get swallowed up with relative ease.

You realise just how fast you’re going (somewhere between 130 and 140mph) when it comes to slow for Woodcote. The Galaxie has discs on the front, but drums on the rear and the pedal is squishy at best. To make matters worse, each wheel is so far away from you it’s hard to get a feel for lock-ups, so you tend to hear a distant howl or smell the tortured rubber.

The race is neutralised by the safety car after Shaun Lynn’s nasty crash at Fordwater (he emerged mercifully unscathed), and when the race eventually resumes I’m nicely tucked up on the tail of the leading pack. A 7.0 litre V8 is very much your friend when it’s a straight drag race for the first corner, and by now I’ve learned to steam by then selfishly park the Ford on the apex and then gas it down the next straight.

It’s a technique that blocks all but the bravest adversaries, but you do feel a bit like a wounded buffalo in one of those gory David Attenborough documentaries, as the hungry Jags, Cortinas and Minis snap and snarl at your heels. It must be massively frustrating for those trying to pass, but I do my best to amuse them (and take up more track) by sliding the tail as much as possible.

By the chequered flag, the ginormous Ford has slugged its way up to a respectable 6th place, and I’ve banked a unique set of memories from a true legend of sixties touring car racing. It’s a ridiculous racing car, but a ruddy marvellous one.