The Goodwood Members’ Meeting will always hold a special place in my heart. It was the first event I did live TV work at (after one of the Goodwood production team jovially informed me: “there is literally no one else, Ed”), and it was just how I imagined – a baptism of fire.

Thankfully, the 77th Members’ Meeting, at which I was working on the TV team, wasn’t covered by a blanket of snow, like the previous year, but that didn’t stop me walking in front of the camera once, missing a couple of cues and asking some questions that made me wince as the words left my mouth.

It’s a much more relaxed environment than the Revival and, while a large percentage of the racers are there to win, a Members’ Meeting win doesn’t carry the same kudos as a Revival victory. Instead of the garlands, garland girls, cigars and trophies, the podium finishers get a bottle of Goodwood ale with a silver cap to it. Don’t tell anyone, but I have one that was sat idly in the Goodwood offices for a while on my shelves at home. I’m sure the ale is delicious, but who wants to break off a solid silver cap?! 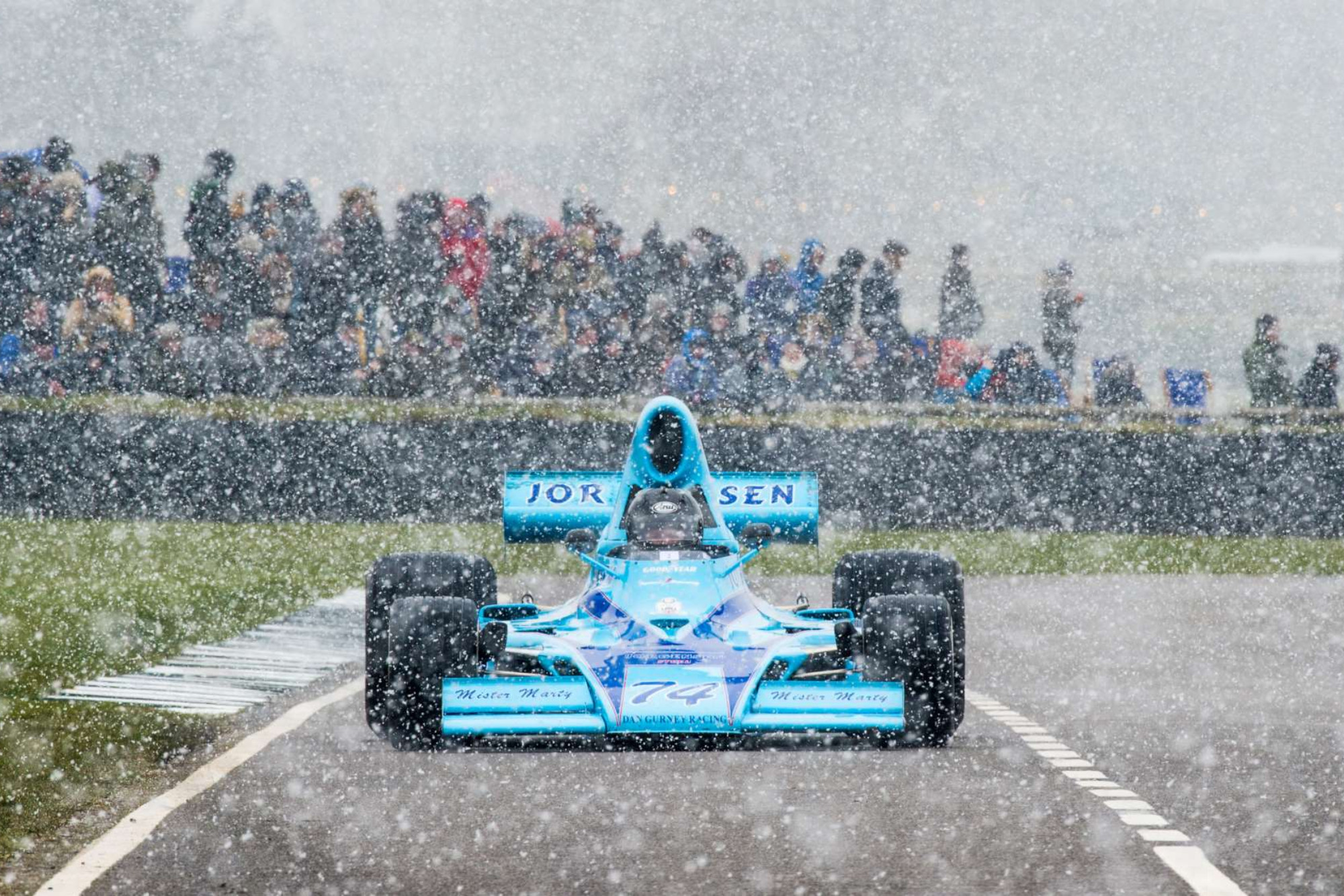 The Members’ Meetings were always a relaxed affair and we will hopefully experience the 78th this year. While the coronavirus has put paid to the event happening this weekend, Goodwood has only postponed it to later in the season.

So, what of the early meetings? The Members’ Meetings actually started at Brooklands, before the Second World War, but come the return of racing, and the end of Brooklands as a useable circuit, they moved to the Sussex countryside.

How Goodwood hosted the curtain raiser for British motor sport, faded through tragedy and was triumphantly revived decades later When Bill Boddy turned up at Goodwood for its inaugural meeting…

The first motor race at Goodwood was on 18th September, 1948, after fighter pilot Tony Gaze suggested to the then-Duke of Richmond, Freddie March, that the perimeter road of RAF Westhampnett would make a challenging circuit. After 15,000 people turned up to that meeting, three more events were planned for 1949.

The lack of grandstands meant that the crowds couldn’t see the track, so migrated to the less-than-stable roofs of the wartime aerodrome buildings. Sure enough, some collapsed, and racing was suspended until larger spectator enclosures could be built. Instead of the Whitsun meeting, the second meeting of 1949 became the first BARC Members’ Meeting, on August 13, 1949. Things went smoother, and it even prompted Motor Sport to label it as “most enjoyable,” partly thanks to “only one accident”. 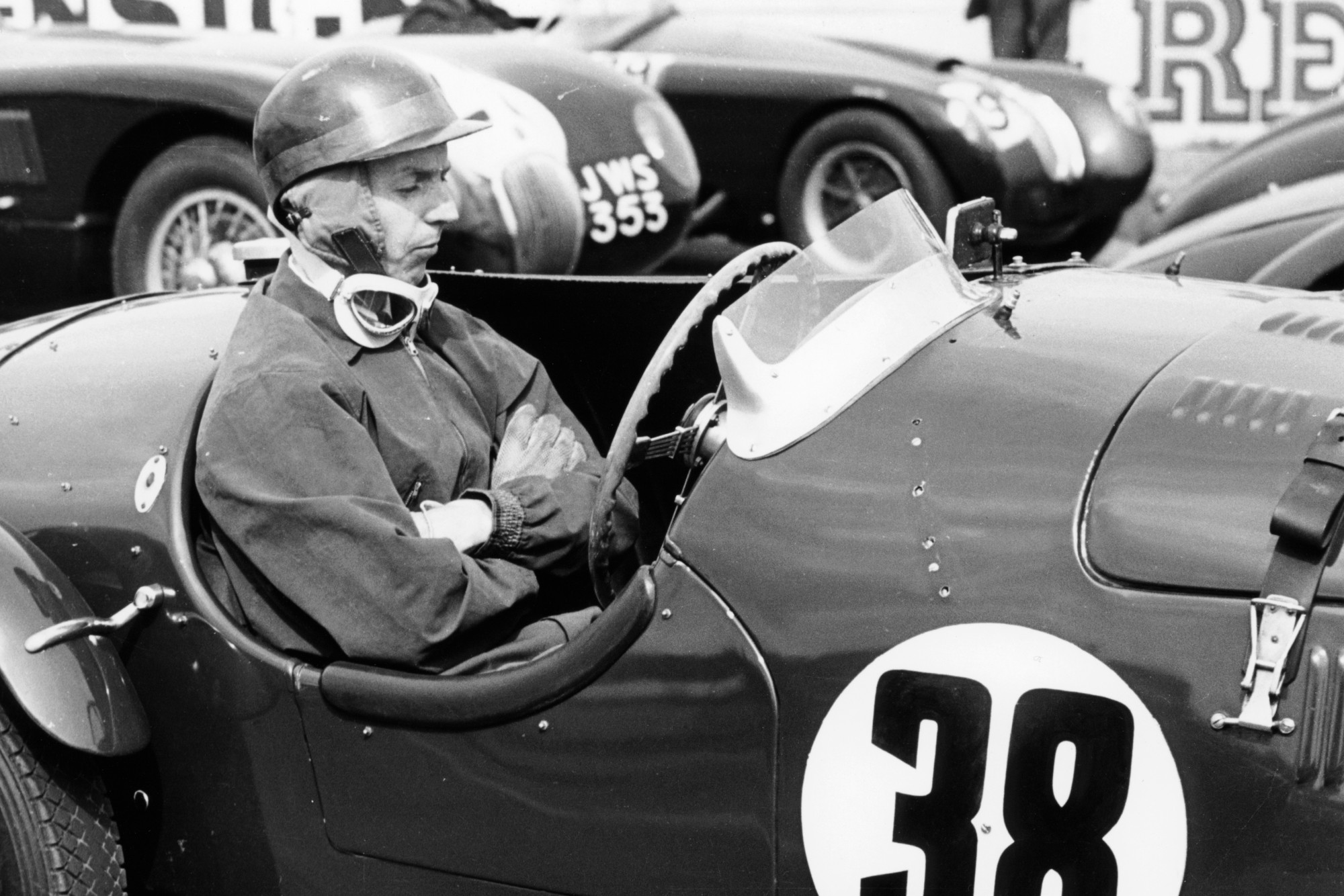 The Members’ Meetings were an equivalent of America’s ‘run what ya brung’ racing scene, but many big names emerged. Mike Hawthorn was the Motor Sport Brooklands Memorial Trophy winner in 1951, while Stirling Moss starred alongside his future team-mate Tony Brooks. There was also the likes of Chris Bristow, Innes Ireland, Jim Clark, John Surtees, Peter Arundell, Richard Attwood, Piers Courage, Peter Gethin, Derek Bell and Brian Redman, who all went on to compete in Formula 1. 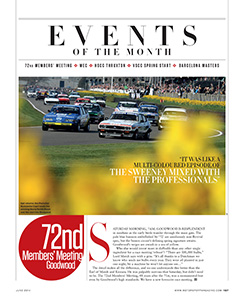 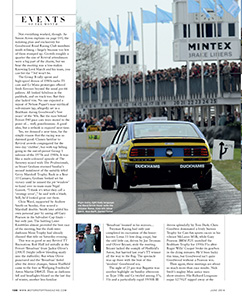 Saturday morning, 7am. Goodwood is resplendent in sunshine as the early birds wander through the main gate. The pale blue banners embellished by ‘72’ are assiduously non-Revival spec, but the…

The well-worn ‘the right crowd and no crowding’ slogan of Brooklands was carried on to the Goodwood Members’ Meetings but, far from being as snobbish as it sounds, it was a case of these meetings operating with their own communities. If you had something to race, bring it along and you were welcomed.

When the circuit closed for racing in 1966, the Members’ Meetings (all 71 of them) came to a halt as well. In 2014, the idea was revived: “I still remember,” said Lord March at the time, “attending the 71st Members’ Meeting as a boy with my grandfather, Freddie March, just before he closed the circuit.

“Now, after a gap of 48 years, the Goodwood Members’ Meeting is back. The event has been brought very much into the modern era and the Gerry Marshal Trophy for Group 1 saloons will be the first time that cars produced after 1966 have ever raced on the circuit, while the Group B rally sprint, Le Mans low-drag prototypes and turbocharged Formula 1 cars will add an additional layer of excitement.” 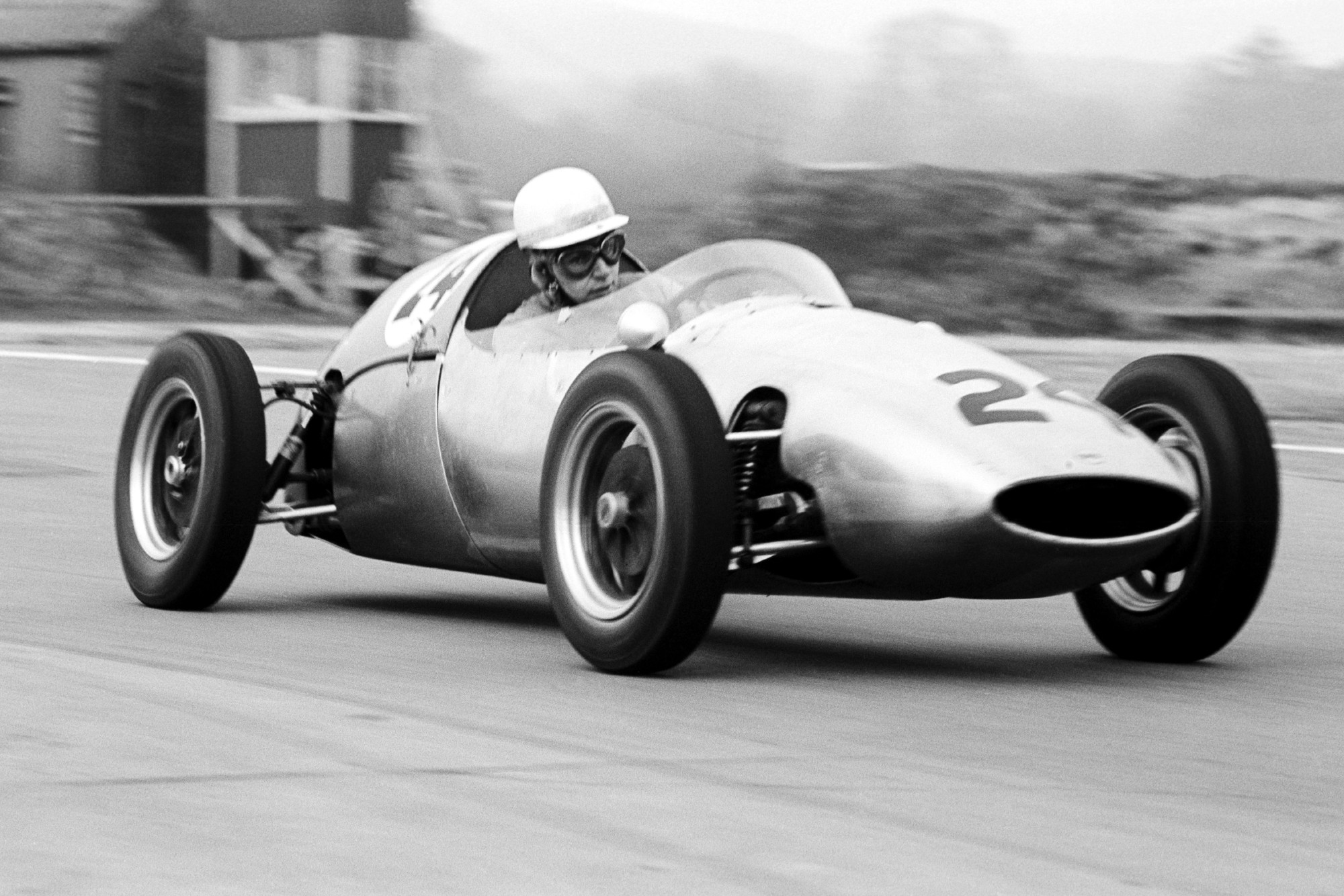 One of the great ideas for the new Members’ Meetings – alongside all the games such as ferret racing, rugby, cricket and tug-o-war, of course – were the high-speed demonstrations. Le Mans cars at dusk, DFV Formula 1 cars and then Anthony Davidson in a 2013 Mercedes F1 machine.

“When you’re told you’ve got to do it, you’ve got to do it,” Davidson said after driving the V8 car. “It was my first ever experience of the Goodwood Circuit, so it was a bit of a baptism of fire [I know how you feel Ant]. It was a real privilege to drive a Formula 1 car here, though, as it hasn’t been done for more than 20 years.” 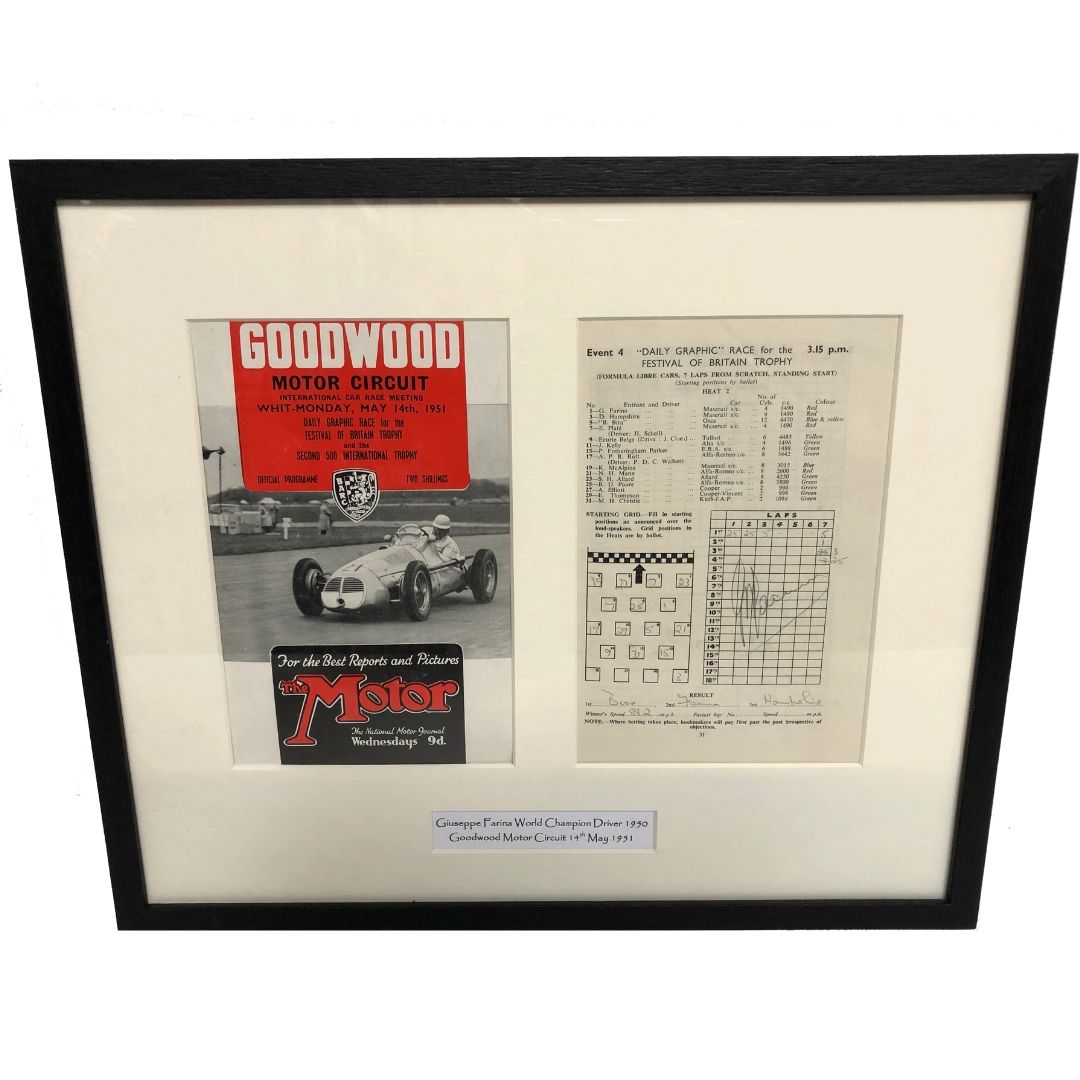 These weren’t just demo laps, though, Davidson was racing Jochen Mass in the famous 6.8-litre 300SEL ‘Red Pig’ and Karl Wendlinger in an AMG GT-S over a two-lap handicap.

Today, the racers and attending members are divided up into houses and compete for the House Shield at the end of the weekend. That and the ‘Great Hall’ where everyone eats is all very Hogwarts, and typically Goodwood in that it’s so different to any other historic meeting, notably the Revival. However, the big difference is that stars and members mix all over the site – there’s no Drivers’ Club, there’s no VIP catering, in much the same vein as Brooklands was all those years ago. You do look up from your lunch to find Gordon Murray politely asking, armed with a glass of red wine, whether he can sit opposite you.

When I worked at Goodwood full time on the Motorsport Content team the Members’ Meeting required just as much work as the Revival, as there were a similar number of races, and therefore a similar number of drivers and cars, and there were also the demonstrations, often including machines that aren’t run very often. Despite walking in front of cameras and asking mundane questions, I think I’ve got an easier job now…