Dickie Meaden was busy at the Silverstone Classic, especially at the wheel of TWR Rover 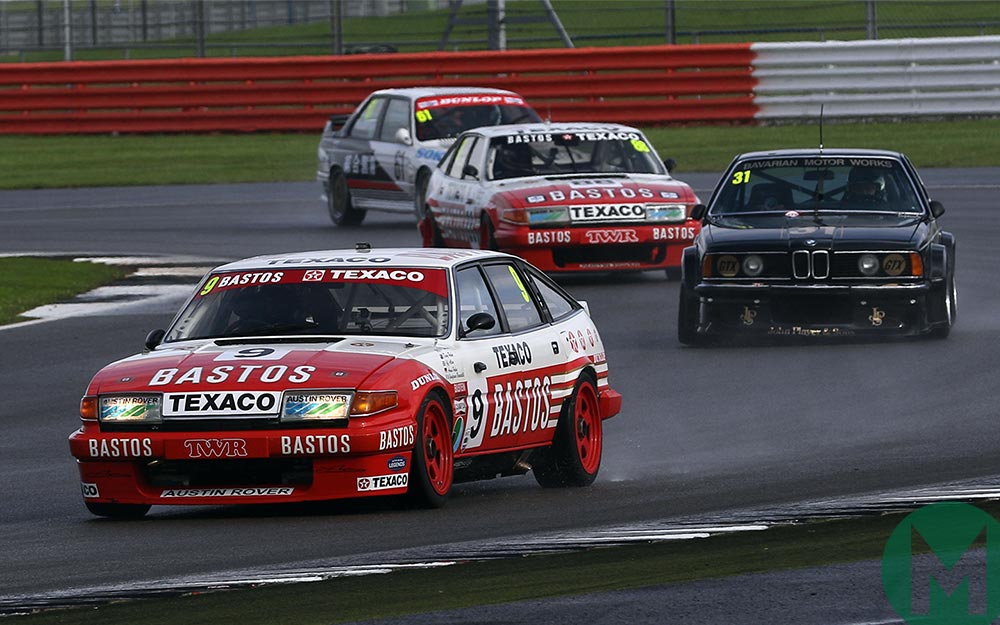 Thirty one years ago I went to Silverstone to watch the RAC Tourist Trophy. Back then it was the 10th round of the FIA European Touring Car Championship and held in early September, not the traditional springtime World Endurance Championship season-opener it is today.

Being the mid-80s the grid was packed with Group A touring cars, among them a trio of fabulous TWR Rovers. These were special cars in a very special era, and walking round the paddock blew my 15-year-old mind. No wonder, with a packed grid of more than 50 cars – including Volvo 240Ts, BMW 635 CSis, Ford XR4Tis, Holden Commodores along with lone entries for a Colt Starion and Toyota Supra – driven by the best tin-top aces of the day.

Tom Walkinshaw was one of my heroes, so naturally I was rooting for TWR. The man himself was sharing a Bastos-liveried car with Win Percy, with the other Bastos car driven by Gianfranco Brancatelli and Armin Hahne. The third TWR car ran in Istel-livery and was crewed by Jeff Allam and Denny Hulme.

Having managed to bag all their autographs earlier in the day, by the time the race started I was yearning for a Rover win. Come the end of an attritional and unpredictable race I nearly blew a gasket when the Istel Rover of Allam and Hulme took the chequered flag for a popular home victory.

So imagine my emotions when, a little over one month shy of thirty one years later, James Hanson from Speedmaster Cars asks me if I’d like to race the very same Rover (Chassis no. TWR/014) in the JET Super Touring Car Trophy at Silverstone Classic.

Recently acquired for sale by Hanson from Allan Scott, the former engine guru at TWR during the Group A and Group C eras, it has done very little since arriving in the UK from Scott’s native New Zealand. A few things have changed since 1986, not least Silverstone circuit, which has evolved almost beyond recognition. Chassis 014 looks different, too, as it sports Bastos colours – one of the many liveries this exceptionally storied machine raced in period.

Apart from a dozen laps or so driven at Donington a few months back for a track test featured in the August ’17 issue of Motor Sport magazine, I’ve not truly driven 014 in anger. No matter, for it really is everything I’d hoped it would be. That’s to say considerably developed from the Rover Vitesse road car, but not so much as to lose its essence or erase its character. Or indeed the wood veneer on the dashboard! With a manual transmission, rear-wheel drive and no driver aids whatsoever, it demands plenty of effort and input but is a benign and friendly car to get to know, despite the excess of grunt over grip.

Rather too much as it transpires, for I find myself fighting ever-increasing amounts of oversteer in both qualifying and the race. It’s huge fun, but not exactly the quickest way to navigate the GP circuit. Not that I’m bothered. Right from the rolling start I’m locked in a short-but-sweet dice with Steve Soper in JD Classics’ Bastos Rover, swapping places though Abbey, Farm and the Loop until he uncharacteristically gyrates at Luffield. This leaves me to spend the rest of the 20-minute race racing with Jim Richards and the glorious JPS-liveried BMW 635. It’s all a bit unreal to be honest.

This much is confirmed when Chris Ward powers by me in the JD Classics TWR XJS with a few laps to go. Rather than feeling aggrieved at losing third in class it simply feels like my Group A touring car dream is complete. Thank you, Silverstone Classic.