There’s no margin for error when you’re being chased by a camera car, but this time around the Foster-Trott MGB was a well-oiled unit. Sort of…

Three months on from our misdemeanours at Silverstone, Ed Foster and I found ourselves lacing up our racing boots again as we prepared to share driving duties for a second time. Oulton Park was the venue, Equipe GTS the series and after the mishaps last time out, we were determined to do it right.

The bonnet was impenetrably fastened, the wheels securely bolted and with racing miles under our belts from solo runs at Snetterton and Silverstone, what could possibly go wrong?

Once again it was hilarious sharing the car with Ed. He’s such a gracious guy and doesn’t get upset that I’m not yet on his pace! That said, I’m closing the gap. I was around 2.1sec off Ed at Silverstone – a similar length track – but this weekend I’d closed the gap by around seven-tenths. I am slightly uncomfortable going any quicker because it’s simply not my car. I think I’ve probably got another second to find driving relatively within myself, but that last half a second is something else. Ed is so comfortable flinging that car around. I know for sure that if I was in my own car, I’d be driving it a lot harder! So that’s the excuses out of the way…

The MGB is an absolute joy around Oulton Park because it maintains momentum so well. Modern cars lose speed when you start to slide, but in the MGB you can slide the rear and the speed stays with you. One of the real treats is definitely Druids, the double apex right-hander. You can see the way the car is dancing around there on the onboard, it’s fabulous. But that said, I did crash at Druids when I last raced there in the VW Cup. When you have a moment through there it does stick with you a little bit.

The race was a 40-minute encounter with one driver change and we were one of the only two-driver teams out there. Most of the others were driving solo and had to do a 30-second pitstop, whereas we could get the change done as quickly as possible. It should have been an advantage – I think someone has done a 15-second stop before – but obviously, it didn’t go quite to plan.

In practice we managed a 21-second pitstop, which would have gained us a huge nine seconds over the opposition. In the race… I don’t have the time, but I have a gut feeling that it was quite a lot slower than 30 seconds! Ed couldn’t get the side belts on when he jumped in and I only noticed at the last minute, so I had to run back over to the car to put the belt in. And then there are all of the other challenges that come with sharing a car with someone as tall as Ed.

To start with, the seat is fixed in a position that Ed is relatively comfortable with, but really the car is still too small for him wherever he sits. He could sit in the boot and it would still be too small. I, meanwhile, have a hi-tech solution to help me reach the pedals, as the seat is fixed so far back: a booster cushion that I made out of existing seat cushion, blocks of foam and gaffer tape. If I’m in the car first, I have to grab it out before Ed inserts himself into the car – otherwise he’d never get in. Ed sits without any cushions in the seat at all, so he’s black and blue the day after the race. 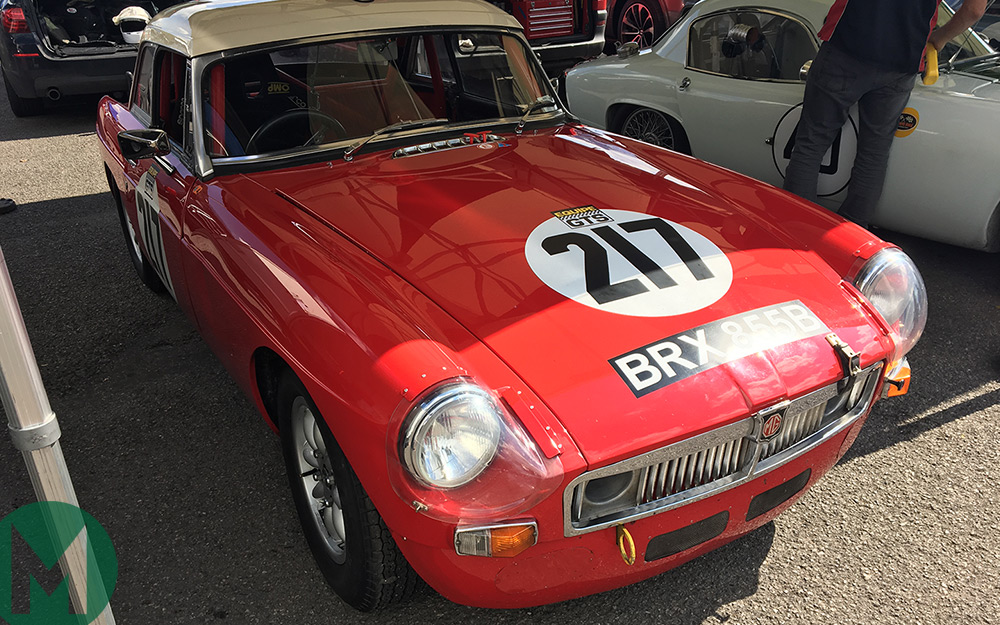 Ed had been a little quicker than me in practice so it was obvious that he should qualify the car, and in a field of around 37 cars (speaking volumes for the quality of the Equipe GTS series) he put us a solid 15th place on the grid. It was then over to me to not blow all of his hard work at the start.

We had tweaked the carburettor to give us a little more low-down response, but I’d not done a single standing-start with it – not even in the paddock. I presumed I wouldn’t need to give it as many revs, but I still gave it around five and a half, dropped the clutch and… it just died. I had to dip the clutch again, give it more revs and go again. I think four cars got past me at the start and I was so annoyed. I got two back by the end of the second lap and tried to settle into a rhythm, but then the safety car came out around the halfway mark.

The pack closed up and I was back on the bumper of some of the cars that had pulled away from me early on. I realised this was my best opportunity and having cocked up the restart at Snetterton when I got my timing badly wrong, I was determined that the same wasn’t going to happen at Oulton. I was looking all the way around the circuit for the green flags and I accelerated towards the safety car line as soon as I saw them fly. I managed to pass the car two ahead of me, so did the car directly in front, and I was feeling really pleased with myself because I thought I’d timed it really well. At least, that is until I got called to the Clerk of the Course office after the race.

He told me that I’d overtaken under the safety car, to which I replied, “…no I didn’t!” He showed me a piece of paper with the timing on it and it showed that I had passed the car #2 ahead just before the safety car line. I couldn’t argue. The safety car line is right by the pit entry and the car #2 ahead had been driving slowly off-line through the right-hander before. I thought that he’d either missed the green flag or was going into the pits. What can you do?

I had been really pleased with myself because he had been quicker than me up to the safety car (that’s the driver we’re onboard with in the above video) and I managed to hold him off until the pitstop, meaning Ed could get in mid-pack and go off on the chase. As it happened, Ed dropped behind shortly after the pitstops after a mis-shift – a problem we were both having during the weekend. 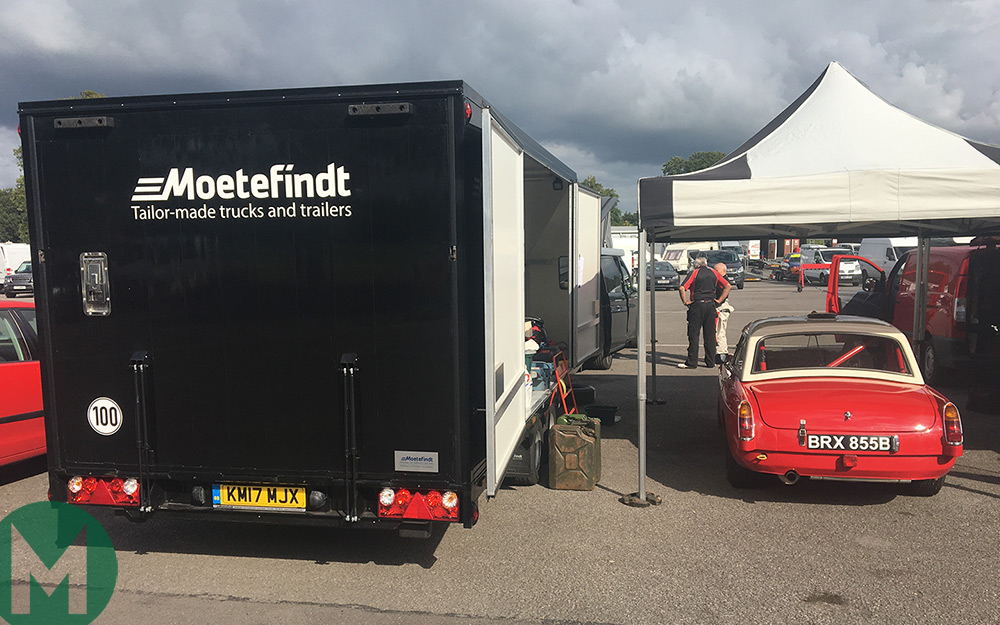 I actually felt really bad for Ed because he was driving incredibly quickly, setting his fastest lap of the entire weekend in the race, but had nobody to battle with for the remainder of the race. That’s just the way it shakes out sometimes, and he brought the car home in 14th place.

In many ways it was a weekend that typified the highs and lows of Oulton Park. There had been a very serious accident during one of the first races on Saturday morning and the air ambulance was called. This was the first time that I’d been at a race meeting as a competitor when there’d been a serious injury and it did play on my mind a little bit. I just thought, ‘I’ve got to distract myself’, so I ended up cleaning the car just to get my mind off of it.

Now I’m looking ahead to the relay and I just can’t wait. I won’t be racing Ed’s car this time, but I will be in another MGB as part of a two-car team. I’ve not really done anything like it before. The relay is a three-hour race and our team has three drivers and two cars. I’ll be sharing one car, whilst the other is driven solo. Oh, and we need a team manager. I’m phoning up everyone that I know.

If I’m honest, I still don’t quite understand how the relay is supposed to shake out – to be honest I’ve not had a chance to read the rules! However, I believe the aim is that if the calculations are correct, every single car should be vying for the lead on the last lap after three hours. Or at least, that’s how it works out on the timing sheets. Everyone’s in with a shot and that’s the brilliance of it. If you drive to your ability, you should have a shot of winning it.

Anyway, it will be an intriguing race at Silverstone on September 30 and one that will be well worth a watch. I can’t wait.

With thanks to David Russell-Wilks for the excellent onboard footage