It’s Revival week, and Dickie Meaden’s sharing an Alfa with an unknown Italian… 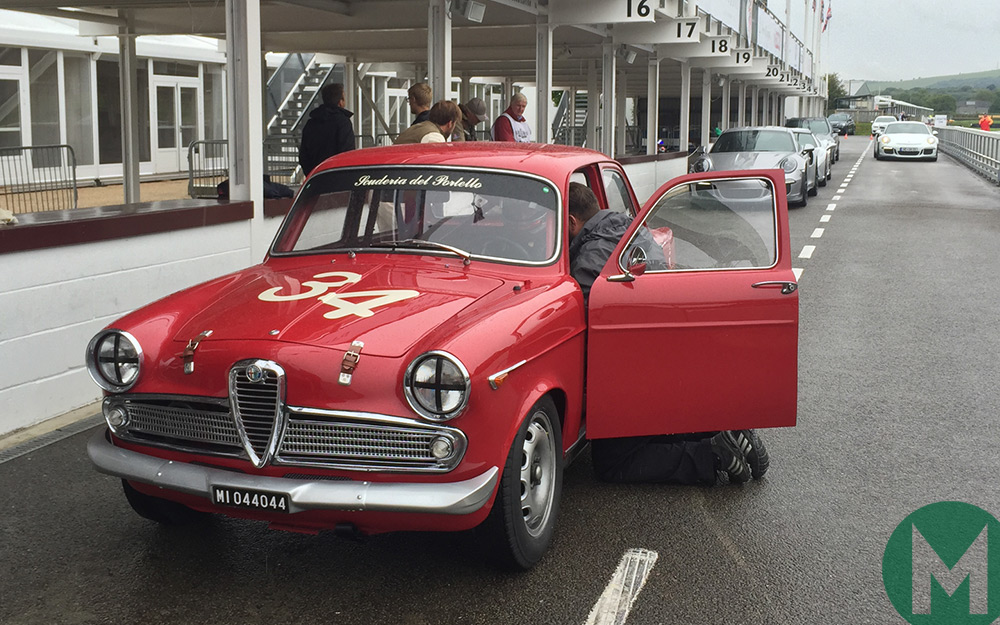 Racing at Goodwood Revival is never something to take for granted. So even though I’ve been fortunate to take part in the last two meetings, I was chuffed to receive an invite to drive a rather fantastic little 1959 Alfa Giulietta Ti in this year’s St Mary’s Trophy.

This two-part race is always something of an epic and a real favourite amongst the drivers and crowd alike. And no wonder, with a constellation of star drivers doing battle on Saturday, followed by the owners (or drivers invited to take part in the owner’s stead, like me) racing on Sunday. With finishing positions from each race counting towards an overall aggregate result, it’s a fun concept that unfailingly delivers brilliant action.

This year sees the return of the pre-1960s tin-tops, which last did battle in the 2014 St Mary’s. As then the cars to watch this year are likely to be the super-quick Austin A40 of Mike and Andrew Jordan and the Mk1 Jaguar of Justin Law and Anthony Reid, plus the Austin A35 of engine supremo Neil Brown and BTCC champ Gordon Shedden. If the 2014 race is anything to go by – when Emmanuele Pirro diced for the lead in the Pro race – ‘my‘ Alfa should also be in the mix, not least because I’m sharing it with Steve Soper, or Stefano Soperiore as he now prefers to be known. I’m Ricardo Meadioca, in case you’re wondering.

Soperiore and I tested the Alfa at Goodwood last week. Frustratingly it was in wet conditions, though looking at the forecast for this weekend that could be a help rather than the hinderance we felt it to be at the time. Apart from some tramlining caused by ruts worn into the tarmac by the Jordan’s A40 (their pre-Revival testing makes Porsche and Toyota’s LMP1 programmes look half-hearted) the angry little Giulietta was in typically feisty form. It takes some hanging onto, but if Soperiore and I are on our mettle it should have the pace to put us in the mix.

If you’re at Goodwood this weekend be sure to save a cheer and a wave for the #34 Alfa. Or come and say hello if you fancy a chinwag. I’ll be the bloke looking slightly itchy in a moth-eaten eBay tweed jacket.

And if you can’t make it to the track then there’s always the excellent live stream, which you can follow via the Motor Sport website here.

Qualifying is on Friday, race one on Saturday afternoon and race two on Sunday, just before lunch.