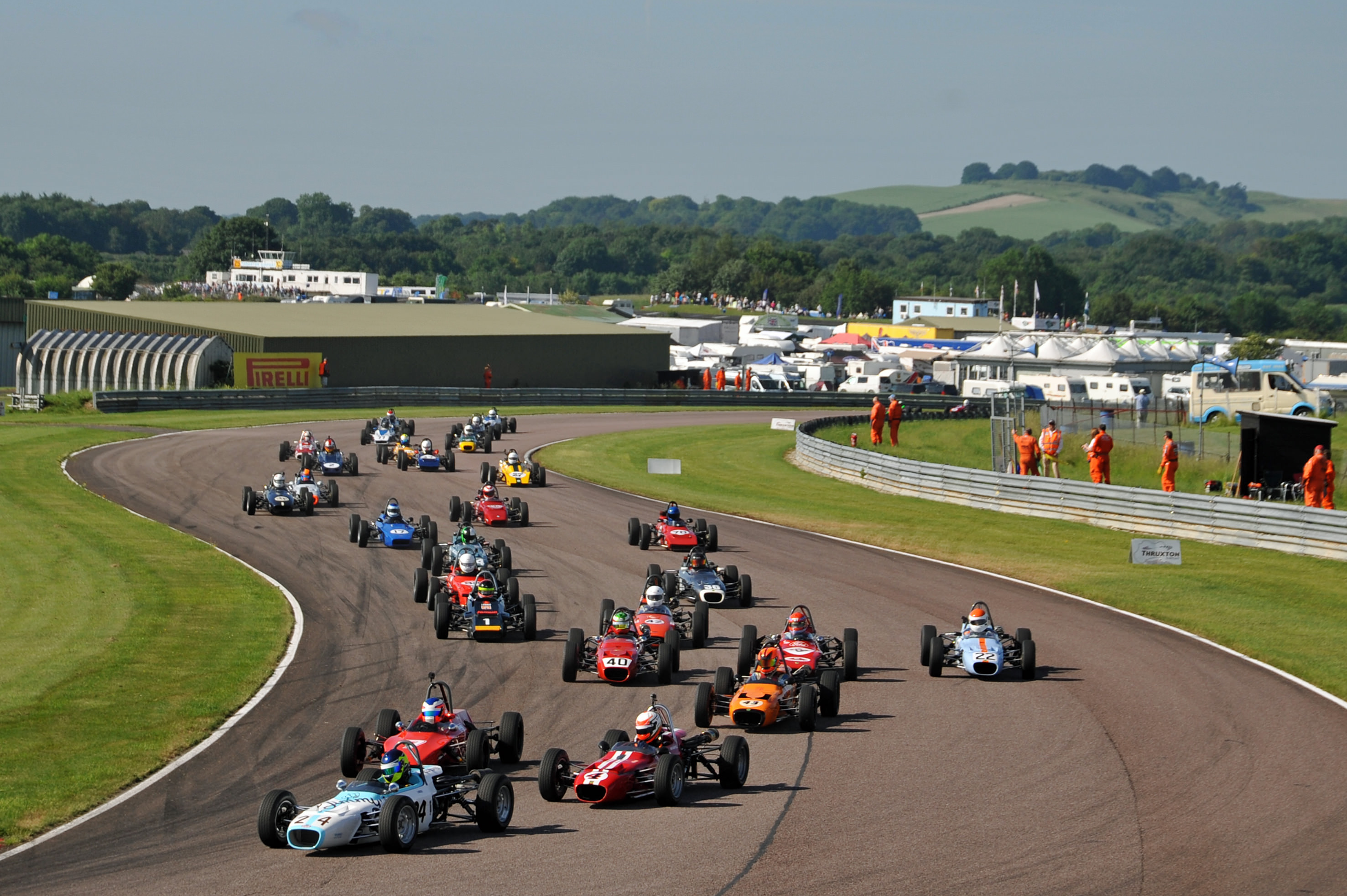 The vista has long since vanished, concealed behind raised earth banks designed to insulate the real world from motor racing’s sonic majesty. In the same way that you once knew you were almost at Snetterton because you could see the Revett Straight through a hedge on the adjacent A11, Thruxton’s proximity was obvious as soon as the A303 started to run parallel with Woodham Hill, the long drag towards the chicane. Comforting visions, both, and rather more romantic than the small brown signs that guide visitors to venues nowadays.

But it’s reassuring that little else about Thruxton has changed. In its original 1950s guise it featured a cocktail of old airfield perimeter roads and runways, but the layout has altered very little since the British Automobile Racing Club adopted the track as its new home in 1968, in the slipstream of Goodwood’s closure. The old ‘bump’ at Church has gone, ironed out some years ago in the name of safety, but it remains a temple of speed and commitment.

I paid my first visit in 1982 (and have thus been attending, on and off, for 36 of the circuit’s 50 years, which is a little startling) and heading south-west from the London area soon became a habit. It wasn’t that there used to be more racing at Thruxton – it has long been restricted to 12 competitive days per annum, but two-day fixtures were relatively scarce back then. A typical routine? Arrive, practise, eat hot dog, race once, pack up, go home…

In 1983, the year of Ayrton Senna versus Martin Brundle, Thruxton hosted five rounds of the British F3 Championship, plus a televised, non-championship F3 event at the year’s end. Small wonder that I seemed so often to be there. The below mono photograph of Ford Fiesta chaos was taken in 1983 – I think at the British Saloon Car Championship meeting in May, though my programme has long since vanished and I’m unable to identify those involved. 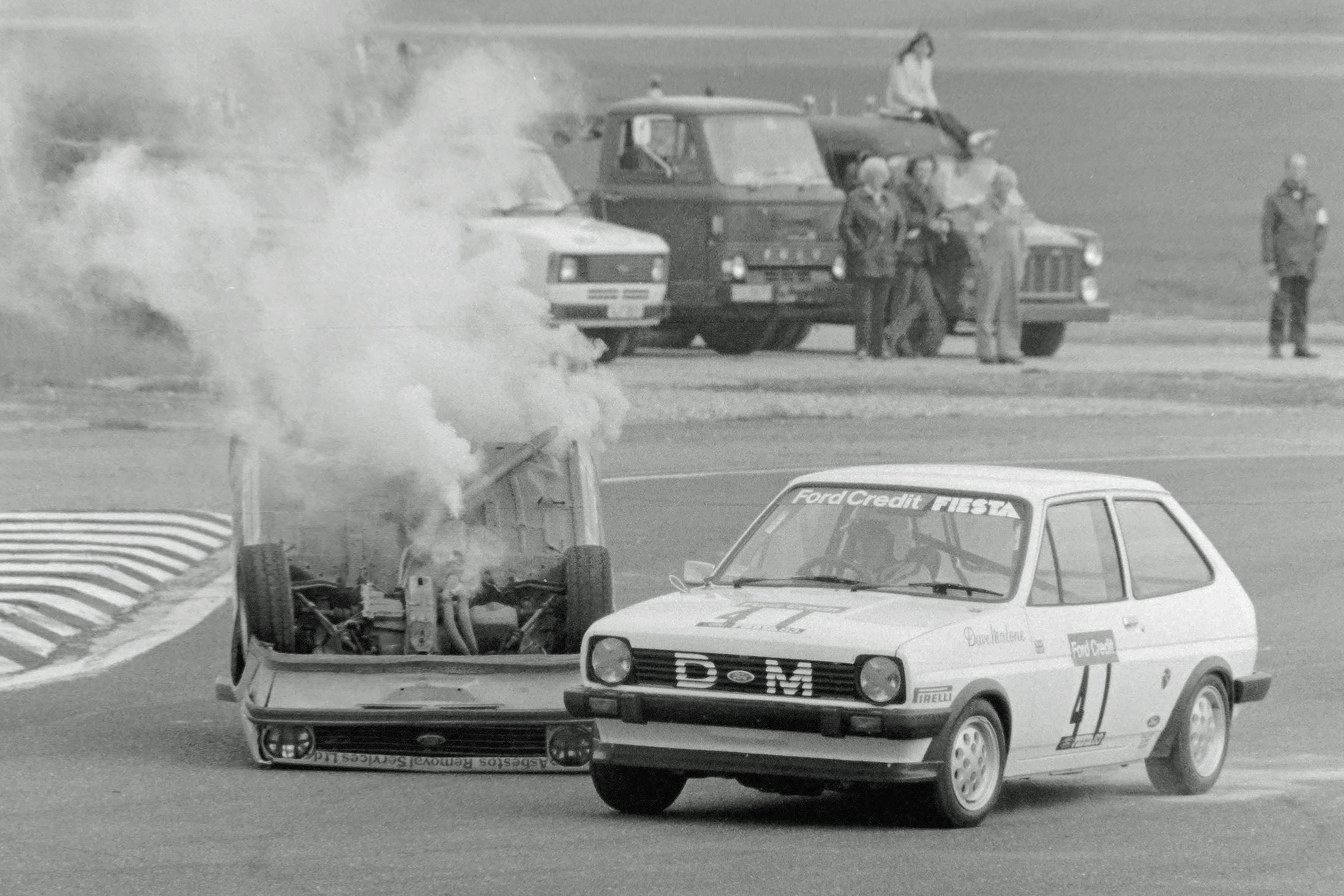 As I progressed from being a cub reporter at Motoring News, Thruxton remained on my mandatory itinerary until 1985, when it welcomed the second round of the new FIA Formula 3000 Championship. There were only 21 cars, but the paddock was barely large enough to accommodate the associated paraphernalia. Looking back, it seems slightly surreal that the championship featured four rounds supporting Formula 1 Grands Prix… and another not far from Stonehenge.

It would be the final such fixture, but with the exception of 1974 – when an oil crisis forced the meeting’s cancellation – Thruxton had always been a staging post for F1’s primary feeder series.

Its second meeting, in April 1968, featured a round of the European F2 Championship won by Jochen Rindt. The modern equivalent would be FIA F2 (né GP2) pitching up every Easter weekend: unlikely, but one can dream…

The Jochen Rindt Memorial Trophy notionally headlined Thruxton’s recent 50th anniversary meeting, but was let down by a modest entry. It was open to F2, F3 and FF2000 cars, but there was only one of the former – nice though it was to see Stephen Weller’s ex-Niki Lauda March 722, a car I’d last watched 46 years beforehand at Oulton Park – and in reality it was an FF2000 race with a few interlopers. Ian Pearson’s team deserved particular credit for stitching Martin Bloss’s Van Diemen back together for race two, after he’d been launched into a chicane somersault on Saturday afternoon.

Elsewhere some exceptionally good racing showcased Thruxton’s essence. Bereft of aerodynamic disruption, Minis and historic Formula Ford cars were able to hunt in thrilling packs and produced some of the finest racing you’re likely to see anywhere. Nick Padmore had to miss the second Mini Miglia race, due to a clashing flight departure, but in the first he lost out to Dave Drew and – as far as we’re aware – failed by 0.163sec to become the first driver to win Historic F1 and Miglia races on consecutive weekends.

Such was the intensity of the opening HFF1600 race that the top four all failed to spot the chequered flag. Max Bartell was ahead after 11 laps, but returned to the paddock to discover he’d finished only second as he’d been glued to Ben Mitchell’s gearbox after the scheduled 10. Mitchell also won part two, following a masterclass in slipstreaming racecraft.

The balance was less frantic, with smaller grids – yet further evidence that there is too much historic racing nowadays (a proposed Super Touring double-header was canned altogether due to lack of support) – but there some worthy demos, not least by Karun Chandhok in Williams Heritage’s FW08. “What’s 9700rpm in top?” he asked as he disembarked after his first run. A quick calculation suggested that was just shy of 170mph. “That probably explains why the chicane seemed to be looming a bit quickly,” he said.

At one stage a Formula Ford Elden was parked outside the team truck. “We’ve had several things turn up unannounced,” said Heritage co-manager Jonathan Williams. “People assume we’ll be able to sort things because we’re running F1 cars, but a couple of the team usually can.”

The paddock was busy, its inner ambience engaging. When Nigel Mansell and Murray Walker united to open the new Thruxton Centre, with its paddock diner and corporate hospitality lounge, each took turns to sign autographs. The queues were huge – and particularly so when Murray took his turn.

And there were the chicane grandstand denizens, whose constant chorus of cheers, encouragement and applause makes this one of the planet’s most enthusiastic places on a busy day.

Just another of the many reasons I cherish Thruxton.