Although no one would be so indiscreet or disloyal to say so, if it turned out that the Queen was beside herself with grief at the loss of her husband of over 73 years, I expect few would be surprised to learn of it.

For he was on the one hand a robust, opinionated man and owner of a very particular and well-defined sense of humour. But on the other he was also a man who knew absolutely from the day he married her that the time would come when his role would become to support, comfort and advise her. And to do so without complaint and for the rest of what turned out to be an extremely long life. And whatever other ambitions he may have harboured, he gave it all up to be her rock, her confidante, the one constant in an ever-changing life.

Why this now? Because this week marks the first anniversary of the date on which we lost one of own, one of very finest in fact. And I want to spend just a few words talking about his consort, the person without whom his last 40 years would have been infinitely poorer, in almost every imaginable regard. 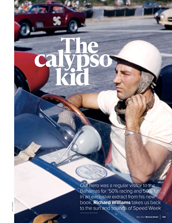 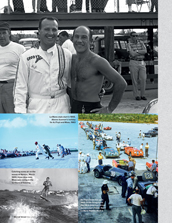 ‘‘Nassau,” the US journalist turned racing driver Denise McCluggage wrote, “was a string of coloured lights across a tropical night. Nassau was the sharp blip of racing engines on a…

May 2021 Issue
By Richard Williams

He of course is Sir Stirling Moss, Boy Wonder, and the man who should be remembered not just for the job he did, but the way he did it. His blend of speed and the way he conducted himself both on and off the track was, is and will always be the greatest example of how to be a racing driver.

But of course very few of us now remember him as a full-time racer: if you’d been a boy of 18 at his last race in 1962, today you would now be nearer 80 than 70. So our image of Stirling is actually shaped by how he was in later life, the tireless ambassador for his sport, roaming the world, giving endless interviews, being asked to tell the same stories over and over again. Stirling Moss wasn’t just a person, it was a business too. And that needed running.

He owed that to his wife, Lady Susie Moss. She may have been married to Stirling the man, but she also managed Stirling the brand. For 40 years her job was to organise him and make sure that, come what may, he was where he needed to be, when he needed to be there, fully briefed, ready to be Mr Motor Racing whenever it was required.

She’d cover for him too: In recent decades Stirling’s memory became patchy at best – possibly because of the bang on the head in 1962 – so Susie would remind him who people were seconds before he met them. When his age and the cumulative effect of his multitudinous injuries started to limit his movement, she’d be his support in the most literal sense too. 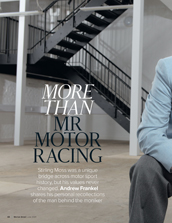 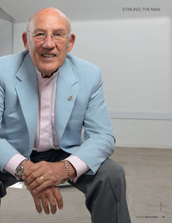 Normally a few pages such as these, if properly written by someone who knew their subject, would be enough to provide some meaningful insight into a life, even one as…

And of course she could have done all this as a dutiful number two, his wife at home and assistant at work. Yet I never saw them as anything close to that. They were the greatest double act in the business. Stirling may have been the one who attracted all the attention but it was Susie who kept the show on the road. I saw them as absolute equals, and when working together probably even greater than the sum of their considerable parts.

It was always going to take an extraordinary person to manage Stirling both professionally and personally and not just because he could be difficult, truculent and possessed one of the strongest characters you could imagine. A deferential doormat wouldn’t have lasted five minutes, but that’s probably longer than someone who tried to dominate Stirling and bend him to her will would have lasted. Susie found the balance. She worked with him, not for him. He was Stirling Moss, but they were Stirling Moss Ltd.

And in private? I think that is largely where such matters should stay, so suffice it to say here that they adored each other. And you can see why: Stirling away from the crowds was astonishingly kind, ego-free and absolutely bloody hilarious. Susie is one of the most thoughtful and warm people you could ever hope to meet, with a sense of humour every bit the match of her husband’s.

She’s also the woman I once found in a hospitality suite at Spa at the end of long race meeting, black bin bag in hand, clearing up all the detritus left by the guests. This is a notoriously bitchy business, but in over 30 years I’ve never heard anyone with an unkind word to say about her.

So if you are minded to think of Stirling, spare a thought for Lady Susie’s too: a more wonderful wife, partner and consort it would not be possible to imagine.