It’s not the sexiest in motorsporting terms but I am guessing that we have all done it – and on occasion rather enjoyed it: ragged a front-wheel-drive car.

Okay, so it’s not Juan Fangio balancing a Maserati 250F on its (centre) throttle. Nor is it Ari Vatanen hanging it all out in a David Sutton Escort, etc. Rather it’s more easily controllable in slippery conditions/more space for your rear passengers/more, well, Reginald Molehusband.

Imagine then my youthful surprise as I witnessed Stig Blomqvist’s Saab 96 V4 – painted a bilious green, I recall – set a faster time on the Harewood Hillclimb stage of the 1975 RAC Rally than Björn Waldegård’s in a Lancia Stratos. That the conditions were very slippery and that not all the test was on a sealed surface passed eight-year-old me by – and the real Stig remains my fwd hero to this day.

Of course, I am too ‘young’ to have seen his Saab forerunner Erik Carlsson rewrite rallying’s rules of engagement – though he did once tell me that the real reason he never lifted was because judgy spectators could hear his two-stroke coming from miles off. (He might have been joking.) 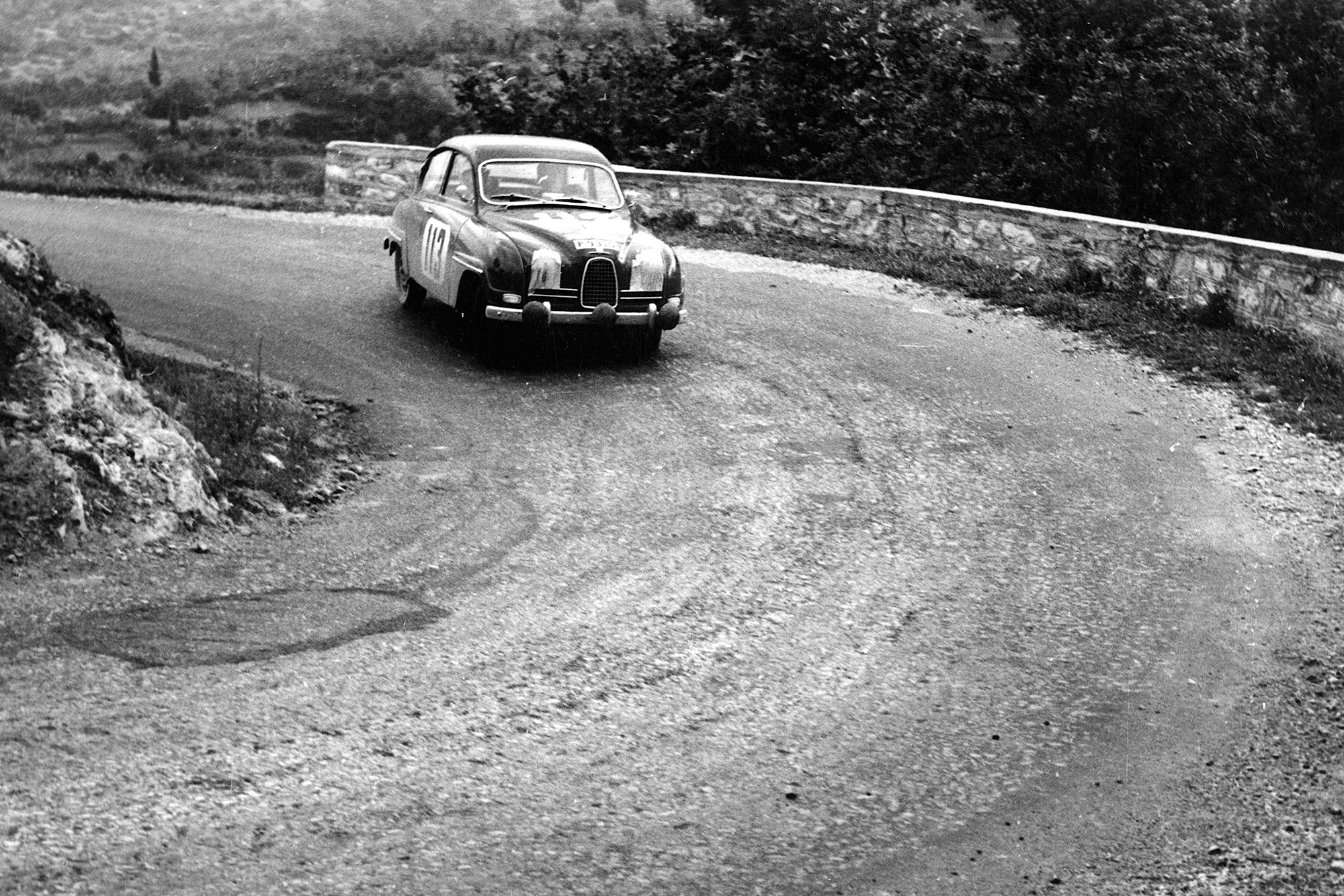 Is he lifting? Carlsson in the 1961 Acropolis Rally

Nor did I see Rauno Aaltonen in his Mini pomp – though he did once tell me that most corners were faster than they looked and that left-foot braking was his way of scratching around the few that weren’t. (Was he perfecting that technique when Geoff Mabbs had to haul him from their upturned Mini aflame on the 1962 Monte Carlo Rally?)

But I was deeply immersed, as a reporter for Motoring News, in the BTCC’s Super Touring era. A couple of laps of Donington Park alongside John Cleland in a supposedly outdated Vauxhall Cavalier, given new life by Ray Mallock’s team, was another eye-opener. No left-foot ‘ballet’, just decisive, hefty but still modulating inputs that the car soaked up with aplomb. It was difficult to tell from the passenger seat which end was being driven.

The experience was double-edged. The bet I promptly put down on JC to win the opening round of the 1995 championship came in at 8/1. But in turn I didn’t like to say when genuine nice guy David Brabham, another of my chauffeurs that day, later asked me if I thought his ballasted BMW 3-series stood any chance. We had just met after all. 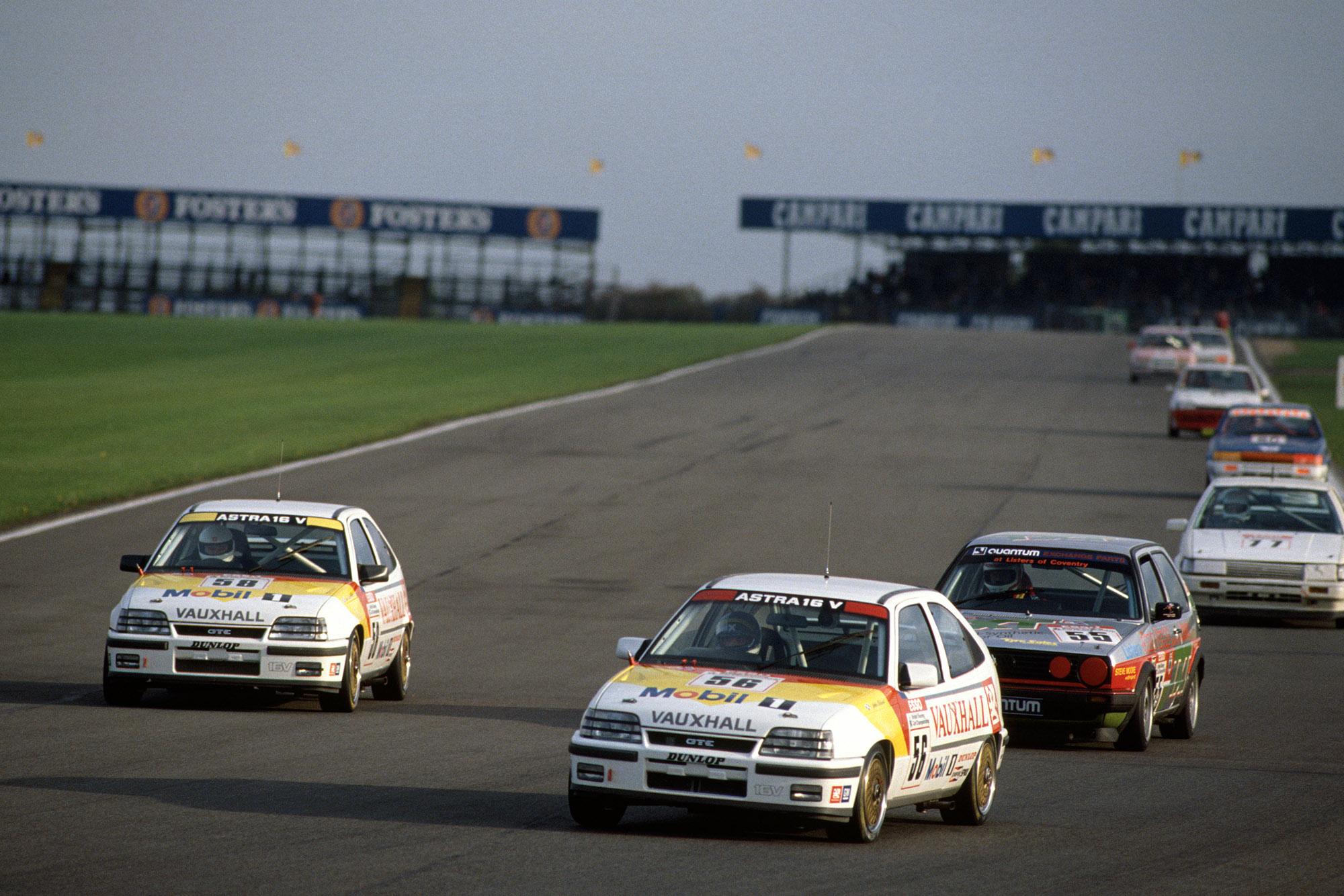 Cleland’s title-winning Astra, leading here at Silverstone, was no Thundersaloon

Cleland had switched from a macho 650bhp Thundersaloon to fwd touring cars in 1989, winning his first title that year in a Vauxhall Astra GTE 16V.

“The Astra was a bit of a letdown after the Thundersaloon but it was a cute little thing nevertheless,” he says. “As long as you kept the speed up and the car had a good bit of turn-in… Understeer is always the problem with fwd. But if you get one that’s nice and pointy, and a bit loose on the back, it’s fabulous to drive.

“I started out in Minis – hillclimbs and sprints – but never left-foot braked. Vauxhall had a connection with Pentti Airikkala and he wanted us to attend his rally school where, he said, he would find us a second per lap by teaching us to left-foot brake.” To paraphrase, John did not agree. “And I stand by that today.

“I did the Race of Champions in Gran Canaria one year and Michèle Mouton sat me in a Toyota Celica alongside Carlos Sainz, Stig Blomqvist and Didier Auriol. Not once did I look out of the window; I was watching their feet. Some braked using their left foot, some used their right, some used both – often to settle the car more than anything else – and they all set pretty much the same time.”

The BTCC’s basically fwd game had moved on hugely by the time of Cleland’s second title in 1995. 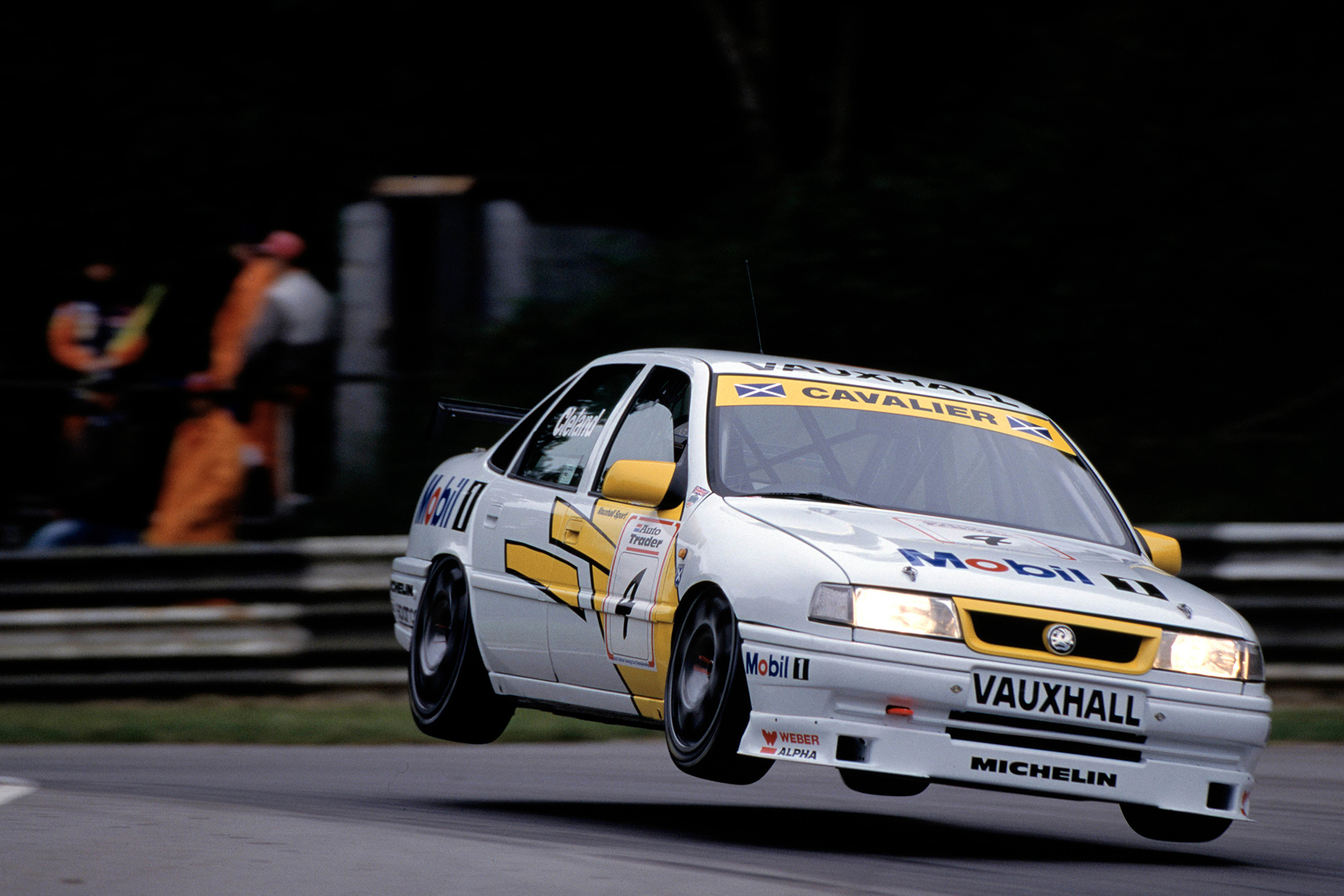 “The aero package made all the difference,” he says. “Before that, you had always been chasing understeer in the Cavalier – its rear end there only to hold the bumper off the ground. By 1995 we were on Michelins, the splitter was sucking and the front end was sticking all the way to apex; and we were able to adjust the tail by cracking open or closing the rear windows. It was a very different animal. But I still right-foot braked.

“The only time I touched the brake with my left foot was to check if I still had a pedal at the end of the long straight. A kart has two pedals. So does a Formula 1 car. I get that. But to the best of my knowledge touring cars still have three. If I had thought it was going to be faster I would have had Pentti teach me. But as it was, to have done so would have been to introduce something I wasn’t that good at. Plus my way – braking in a straight line and then driving through the corner – was easier on the car.”

Nobody had more experience in this form of racing and racecraft was Cleland’s signature skill throughout 1995. 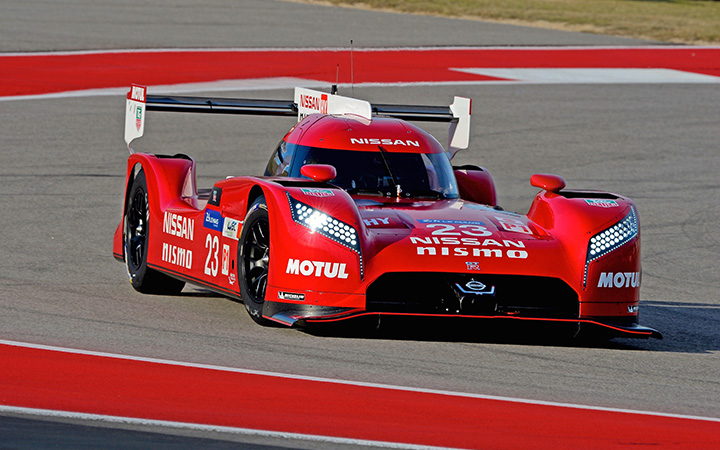 The Nissan GT-R LM NISMO is a FWD/AWD LMP1-H racer that meets FIA WEC and ACO criteria and features a 3-litre TTV6 IC engine with DI, in conjunction with an…

There were perhaps faster men: Rickard Rydell – £10 at 25/1 for the title (I should have gone each way!) – and Alain Menu were the benchmarks in this regard around that time. Some of the best saves I have ever seen were completed in Renault Laguna and Volvo 850.

“Rickard was a star,” says Cleland. “And Menu was every bit as good; only years afterwards did I discover that he didn’t left-foot brake either. Yvan Muller came to Vauxhall with an ice racing pedigree and was left-footing everywhere. He had some really lurid moments that he managed to recover from. He was pretty special in that respect.”

Of course, I never saw the exuberant John Rhodes lay down a destroyer-type smokescreen in his Cooper S. And some do say that Sir John Whitmore, better known for three-wheeling a Lotus Cortina, was the fastest Mini man of them all. Or was that future Ford/Porsche guy John Fitzpatrick?

But has anybody driven anything harder for longer and more spectacularly than Jean Ragnotti in a Renault Clio Maxi? Okay, maybe Gilles Panizzi and François Delecour did, with their eyes-on-stalks commitment in barking Peugeot 306 Maxis.

Oh, hang on. I once saw Colin McRae, on a lowly seeding in a prize-drive (?) Peugeot 205 GTI, over-crest-into-K-left about 25mph faster than anybody bar the top boys in 4wds had managed. I almost leapt out of my wellies.

Richard Burns was more measured but his foundation performances in what was basically a standard 205 GTI told you all you needed to know. He was skimmingly fast.

So, too, was Kenneth Eriksson. Epic in a VW Golf GTi 16V in the inaugural season of Group A WRC, he is too often overlooked. So, too, is the late Dave Metcalfe, mighty in Nova. 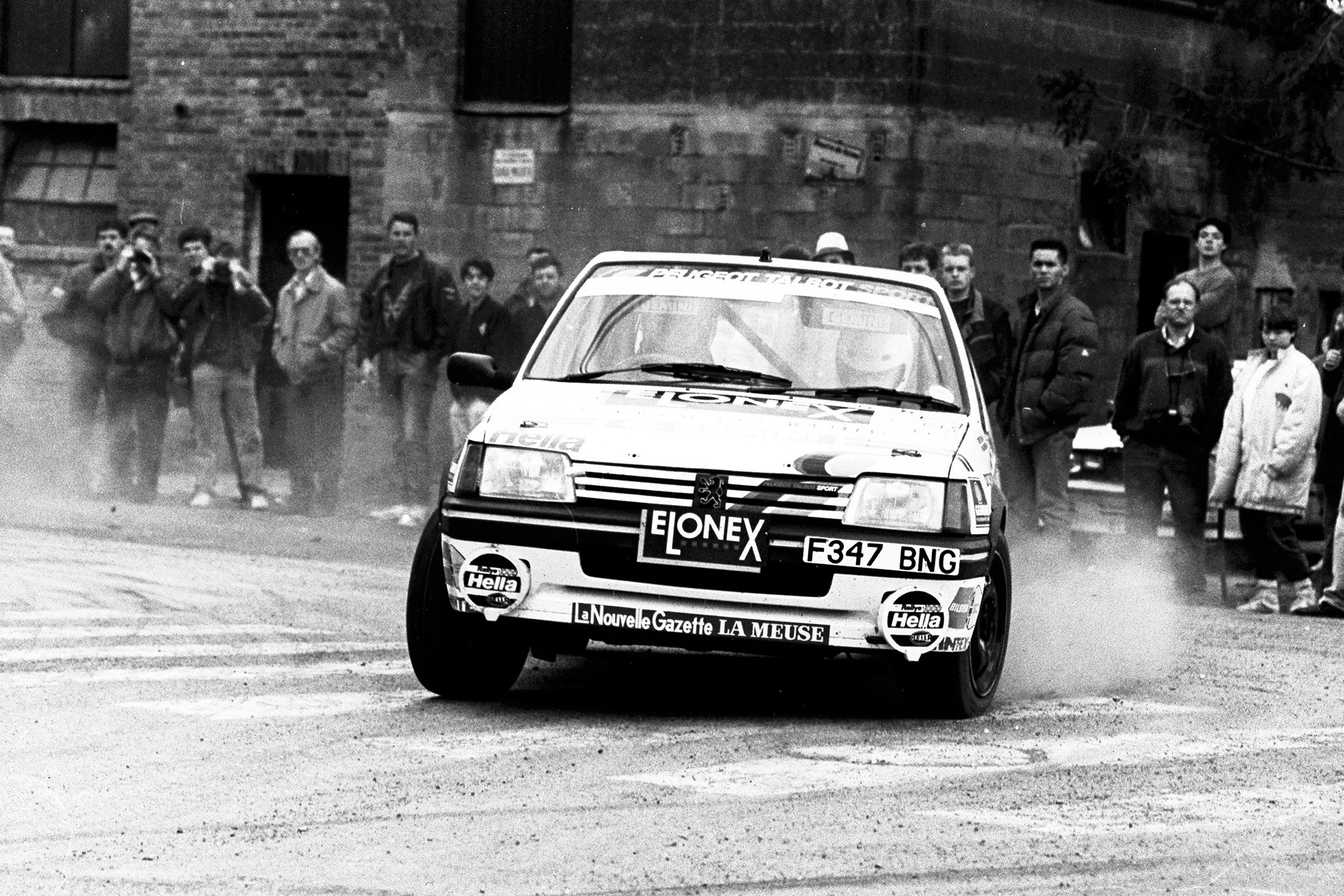 Burns’ talent flattered the Peugeot 205, here in 1991 at Circuit Ardennes

Judging by the hairs on the back of my neck, the spiritual can emerge from the mundane everyday. You know when you’ve been buzzed by buzzbox, hot-wired by a hot hatch.

Not that we haven’t ever enjoyed the exotic.

Lou Moore’s brace of Blue Crown Spark Plug Specials – Offy-powered chassis by Emil Deidt – came within eight laps and a cooked magneto of sweeping the board at oil-slicked Indianapolis from 1947-’49. 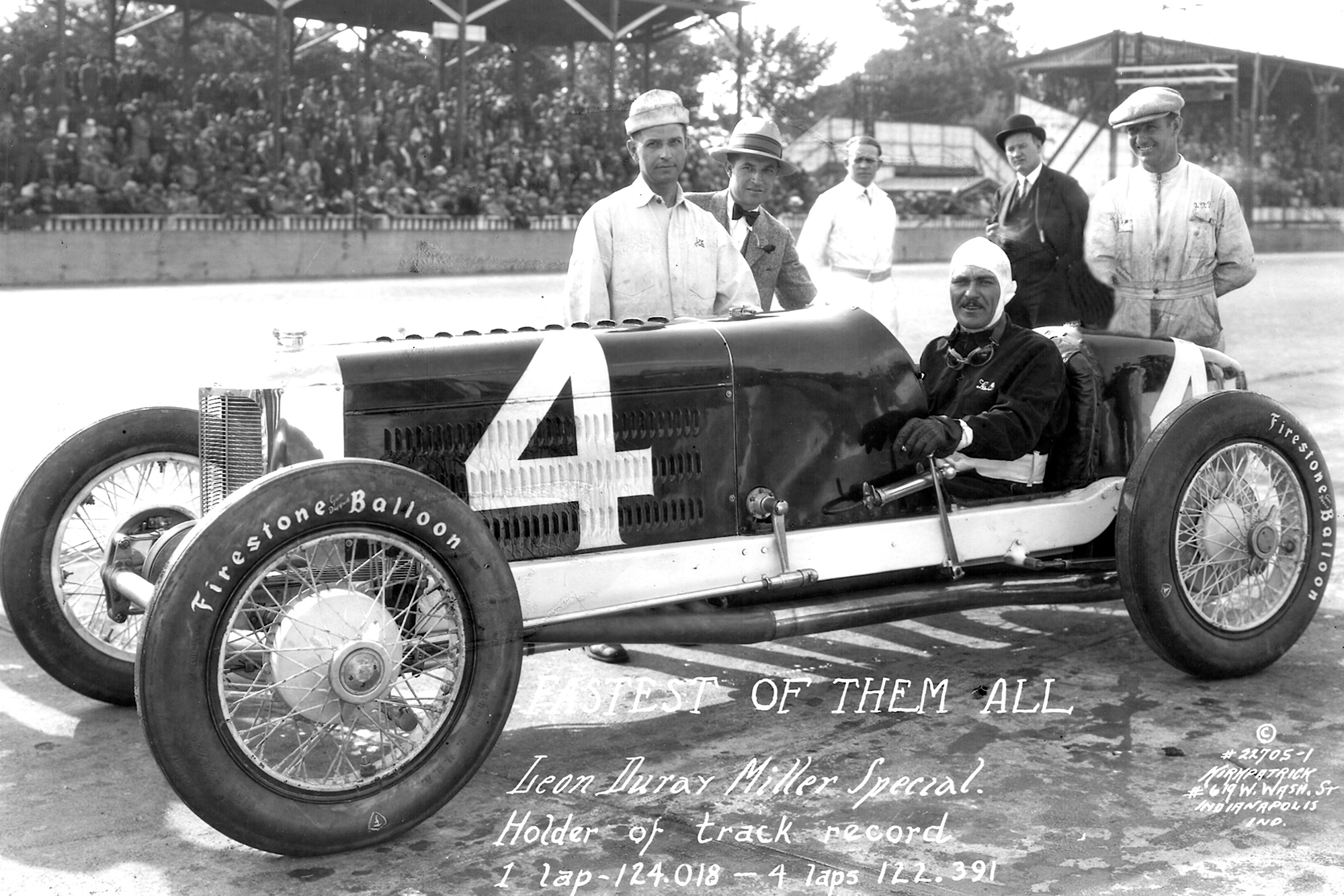 Leon Duray at Indianapolis in 1928

Somewhat bulbous though clearly efficient, those cars lacked the alluring, rakish deliciousness of genius Harry Armenius Miller’s fwd Indy contenders from 1925-’29. Of these, Leon Duray’s recorded a 122.391mph four-lap average in 1928 – on bricks and just 91 intercooled/supercharged cubic inches glugging methanol. (One week later he lapped Packard’s banked test track at 147mph. And that summer he would cover 10 miles at 135.33mph at Montlhéry, near Paris.)

That’s the car, fwd or otherwise, that keeps me awake at night – albeit not in a sexy way and despite its eventual vivid purple scheme with acid-yellow wheels and chassis rails.

At least it wasn’t bilious green.

A permanent tribute to Murray Walker has been unveiled at the National Motor Museum in Beaulieu, Hampshire, remembering the legendary commentator who died in March. The commemorative plaque pays tribute…

The Brabham BT44B was Carlos Reutemann's favourite F1 car, according to Gordon Murray. As the car ran up the hill at the Goodwood Festival of Speed, its designer paid tribute to the Argentinian's natural talent