You’ve perused the Jim Clark Museum, you did several commemorative rounds of the Donington Collection in its last days – you’ve even braved the banking with a stroll at Brooklands. But what next?

You want to go a bit deeper into satiating the thirst for motor racing machinery, slightly off piste. Look no further than our ‘Ghost Cars Museum Trail’ – a route around Europe taking in great roads, fabulous scenery and rarefied racers that never even managed to turn a wheel in anger, but are still displayed in all their glory.

In our October issue, Gary Watkins reveals the story by behind motor sport’s greatest unraced cars, from the stillborn Porsche LMP2000 to the redundant Ferrari 637, whilst Anthony Peacock looks at the service park of abandoned rally cars through history, from Group B to S, and everything in between. And you can see many of these scarce beasts in the metal: see below for our 2,000 mile tour round Europe, with suggested additional stops and routes to turn it into a European road trip for the ages (with an optional Far East extension).

The tour begins at Calais, with a drive across the flat expanse of Northern Europe and an optional pitstop in Lier, just outside Antwerp where you’ll find the Abarth Works Museum with 300 quirky classics on display. Head into Germany, and you’ll have a chance to pick up the pace on unrestricted stretches of Autobahn that speed you from Essen to Hamburg for the first ghost car stop.

Toyota’s F1 project was told it had to win within the first four races of 2009. It came close with a pole for Jarno Trulli in Bahrain, but there was no celebratory cigar. The board in Japan had seen enough after eight seasons of toil though, and pulled the plug at the end of the year.

Work on the 2010 car was well underway however, looking like an improvement on the already promising TF109 machine. “In terms of aero figures, the car was exceptionally good,” says designer Pascal Vasselon.

Never making it as far as an actual race track, one car sits underneath the company’s wind tunnel in Cologne, whilst the public can spy another example at the Prototyp museum in Hamburg.

For the next stage in the tour, you can take the direct route to Ingolstadt or weave through Germany’s car-making heartland and immerse yourself in the nation’s greatest automotive hits. As you’re heading south, Wolfsburg is just a short diversion from Autobahn 2, and home to Volkswagen’s Autostadt “theme park”, which sits alongside a factory and features driving experiences, giant slides and a museum that tells the story of the car (including other brands) over five floors.

A diversion to the epic Porsche and Mercedes museums in Stuttgart takes you further off the ghost car circuit, but you won’t regret adding an extra weekend onto the tour before rolling in to Ingolstadt and the Audi museum.

If you thought Group B rally cars pushed the automotive limits, the WRC had an even wilder formula up its sleeve before a spate of fatal accidents stopped it in its tracks – Group S. 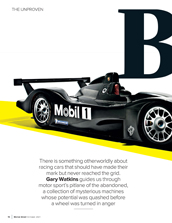 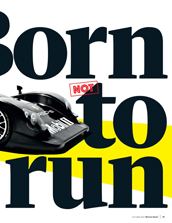 The great unraced ghost cars: Born not to run

One of the most formidable machines created for this stillborn formula was the Audi Quattro ‘RS002’.

Whilst the car was not a looker, the engine apparently packed a 1000bhp punch. Unlike previous Quattros, it bore no resemblance to any road-going model, was developed in secret – so much so that not even the Audi board knew about it.

When they did get wind though, the crazy project was put to a stop. The car still exists though, and you can see it at the Audi museum in Ingolstadt.

Travel south and you can complete your German automaker tour with a visit to BMW Welt in Munich, where exhibits range from touring and F1 cars to BMW’s extensive art car collection. Then it’s time to stop looking and really start driving as you approach the Austrian border.

If time is no limit, then swing off the Autobahn and head to Lindau for the start of the German Alpine Road, which winds through the Bavarian Alps to Lake Königsee for 280 miles – but expect tourist traffic.

More options abound in Austria, where Alpine routes offer a lengthy but alluring diversion, before you head back to the A12 Autobahn for a blast through the spectacular scenery of the Brenner Pass and into Italy.

Was the Ferrari’s stillborn Indycar effort, the 637, simply a political ploy by Enzo Ferrari, or did he really mean business on the other side of the pond?

We’ll never know, though Il Commendatore did get to keep his beloved V12s, which was the main crux of the disagreement with the FIA. The resulting 637 is one of motor sport’s most fascinating curios, now residing at the Ferrari Museum in Modena.

The late Michele Alboreto was only driver to get behind the wheel of the Gustav Brunner-penned car, but the other driver involved in testing a March Indycar that Ferrari acquired, Brickyard winner Bobby Rahal, told Motor Sport last year: “From a chassis standpoint, there’s no reason to think it would not have been competitive, right from the start.”

Heading into Switzerland from Italy, it’s almost obligatory to take the snaking Gotthard Pass over the Alps, between Airolo and Andermatt, before heading into France. As you’ll be going through Mulhouse, directly past the Cité de l’Automobile, make time for a stop to see the 243 road and racing cars that date from the early days of the automobile.

Peugeot so-called ‘Supercopter’ was the French marque’s next step in endurance racing after dominating Le Mans in ’92 with the EVO 905 Bis.

However, the car only made it as far as one practice session during a race meeting at Magny Cours for the final race of the year. Even so, driver Yannick Dalmas still got enough of an impression to comment that the car was “amazing, so agile”.

Peugeot elected not run the car as it hadn’t yet sussed the ideal set-up, but then the ’93 World Sportscar Championship was canned and the car became obsolete.

However, it’s occasionally rolled out at Musée de l’Aventure Peugeot in Sochaux, should you ever get the chance to catch a glimpse.

Should you find yourself at the above museum in Sochaux, it would be remiss to not also inspect another permanently paused Peugeot, the 305 V6 Rally. Using the powertrain from a 504 Coupé, the Pug doesn’t exactly look like something which would strike fear into the hearts of its rivals.

It was intended to compete in Group B in 1983, but then canned after a reshuffle at board level. Subsequently though, Jean Todt was brought on board, and the might 205 T16 project soon began.

The European leg of the tour ends here but the truly dedicated won’t return to Calais and instead take a trip to Paris and hop on a plane for the Tokyo bolt-on leg, where the Toyota Mega Web showroom could be just the starting point for a tour of Japan’s exotic automobilia.

Toyota also wanted a piece of the Group S action, and created the terrifying MR2 222D.

Test driver Ove Andersson commented: “You never knew what is was going to do. It could swap ends at any time without warning.”

Perhaps just as well then that the car, which aimed to compete in 1987, was shelved as Group S was stopped before it even began.

You can still see one such example now though – at the Toyota Mega Web showroom in Tokyo.