James Hunt’s seven-year Formula 1 career provided a litany of memorable moments, but his win at the 1976 British Grand Prix, achieved against a backdrop of a riot-threatening home crowd, furious on-track action and political infighting was exceptional even by his standards.

Then-McLaren team manager Alastair Caldwell told Motor Sport he considers the drive as Hunt’s best, describing it as a “triumph – a test of the driver in very difficult circumstances.”

Denis Jenkinson summed up the weekend’s proceedings as “a dismal farce”, but — administrative wranglings aside — it was a pretty good motor race.

As a record heatwave swept across the UK in the summer of ‘76, temperatures were also rising in the F1 Driver’s Championship. Hunt had become the unlikely challenger to Niki Lauda and Ferrari, the freewheelin’ playboy somewhat of an antidote to the more austere Italo – Austrian approach.

The McLaren man’s points tally didn’t represent the threat he had shown on track. Despite having his Spanish Grand Prix win reinstated (after originally being disqualified for a technical infringement) Hunt was still only on 24 points to Lauda’s 55. The Brit would need a serious run of results to claw back the difference.

“For I suppose half a second, it was extremely funny for me to see two Ferrari drivers take each other off the road”

After Hunt won at Paul Ricard, Brands Hatch provided the fightback’s next scene. Lauda took pole, but only 0.06sec ahead of Hunt.

As the flag fell it was Ferrari’s other man, Clay Regazzoni, who got the best start. The Swiss’s enthusiasm outran his Goodyear’s adhesion – going into Turn One he collided with Lauda and was sent into a spin.

In his book “Against All Odds”, Hunt said he enjoyed the Scuderia’s coming together “For I suppose half a second, because it was wonderful, extremely funny, for me to see two Ferrari drivers take each other off the road”, before he realised he too was unable to avoid the out-of-control Regazzoni.

Hunt’s car was launched into the air from the resulting contact with Regazzoni, damaging the front suspension of the McLaren. 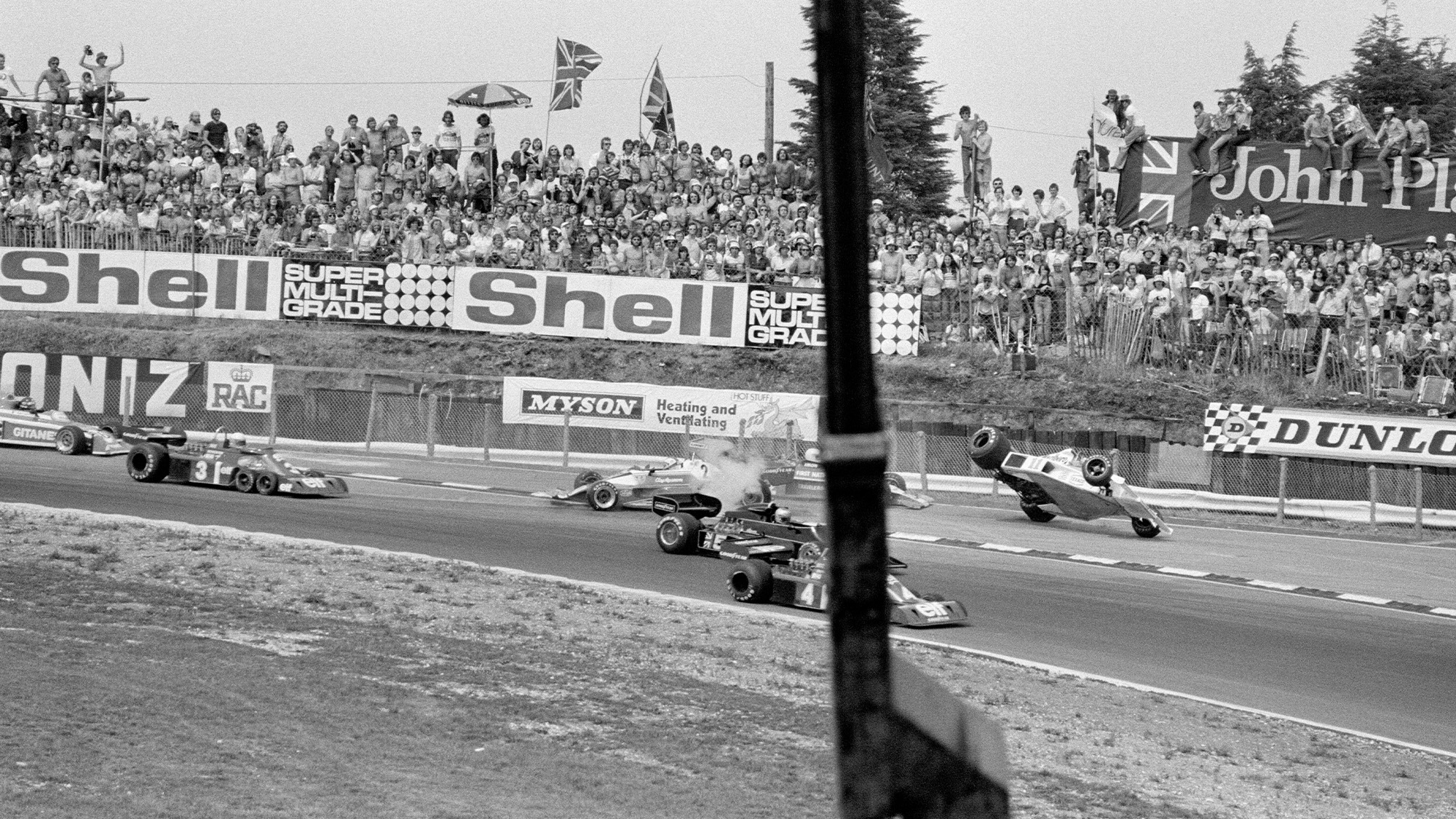 Hunt is tilted skywards in the first-lap crash

Amidst great confusion, the race was stopped. In a crucial move, Hunt had abandoned his car at a backroad leading up to the pits, instead of coming round to complete a full lap. “James came running up the hill and found me,” Caldwell remembers, “I said, ‘What’s the car like?’ and he replied ‘It’s awful, the car’s stuffed.’

“So I said, ‘Okay, we’ll get the T-car (spare) out.’ Then I wandered down to have a look at the race-car and saw immediately that it was repairable.

The quick-thinking team boss commandeered the apparently stricken McLaren himself: “I drove it up the hill to the pits, got all the mechanics of all three cars and told them to fix the car,” says Caldwell. “I sent the truck driver off to the truck to get the spare parts for the car, since I could see what it was needed.”

The situation reached fever pitch as Hunt fans (basically all the paying spectators) broke into chants of “We want Hunt!”

Other competing teams were aware that Hunt had not completed the full opening lap and had stopped on track instead of bringing the car back to the grid for the restart. This meant technically he should have been out of the race.

Further to their complaints was that once the grand prix had started, drivers were not allowed to switch to a spare car – even if the race had been stopped.

All of this meant that Hunt apparently couldn’t take the restart. Whilst Caldwell and his men furiously worked on the car, McLaren boss Teddy Mayer was arguing Hunt’s case with the stewards for him to be allowed back on the grid in their spare car.

Caldwell recalls the dispute, “The organiser, a guy called Dean Delamont, was saying to the race teams ‘You’ve got to take your T cars off the grid’.

“This awful big argument was going on, we said, ‘We’re going to race the T-car’ and Ferrari were shouting, ‘We’re gonna race our T-car too!’. Meanwhile, I was fixing the race car.

“This took half an hour to do all this stuff – arguing. As soon as it (the car) was finished, I drove it down, put it on the grid. Literally, James got out of T-Car and got in the race car.”

Whilst the dispute had been going on, organisers also became aware of crowd unrest. The situation reached fever pitch as Hunt fans (basically all the paying spectators) broke into chants of “We want Hunt!”, before launching bottles, cans and whatever else they could find onto the circuit in protest at his exclusion (see video below)

“Not very British”, as Caldwell pointed out, whilst motorsport journalist Simon Taylor commented, “I’ve never seen such an extraordinary display from the public at a motor race.”

With the chorus of boos ringing in their ears, the stewards caved and allowed Hunt to take the restart after all.

When the race got underway for a second time, Hunt fell in behind Lauda. 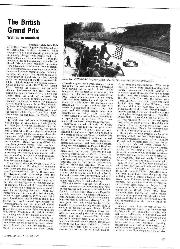 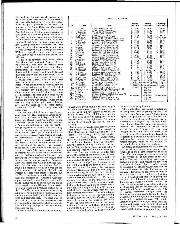 Well up to standard Brands Hatch, July 18th If there is one thing that you must admire the British for, it is their consistency. Once they get hold of a…

The Brit tracked his Austrian title rival for 44 laps. As the cars burned fuel and became lighter, Hunt found the McLaren’s handling more to his liking, allowing him to crank up the pressure, edging closer and closer.

Discussing his pursuit of Lauda, Hunt was fairly sure of the outcome: “About 10 or 15 laps before I actually passed Niki, I knew I’d get him. I knew I was getting on top and our lap-times were coming down, down, down. It was quite fantastic.”

Backmarkers pushed Lauda into Hunt’s clutches and after 44 laps, he finally effected a pass.

Archive footage shows Hunt following Lauda into Druids and out of sight behind a copse, with the McLaren snatching the lead before they re-emerge out of the corner.

The local hero then pulled out a 52sec lead over Lauda to dominate the remaining laps and take the win to the elation of the crowd and benefit of his championship challenge. 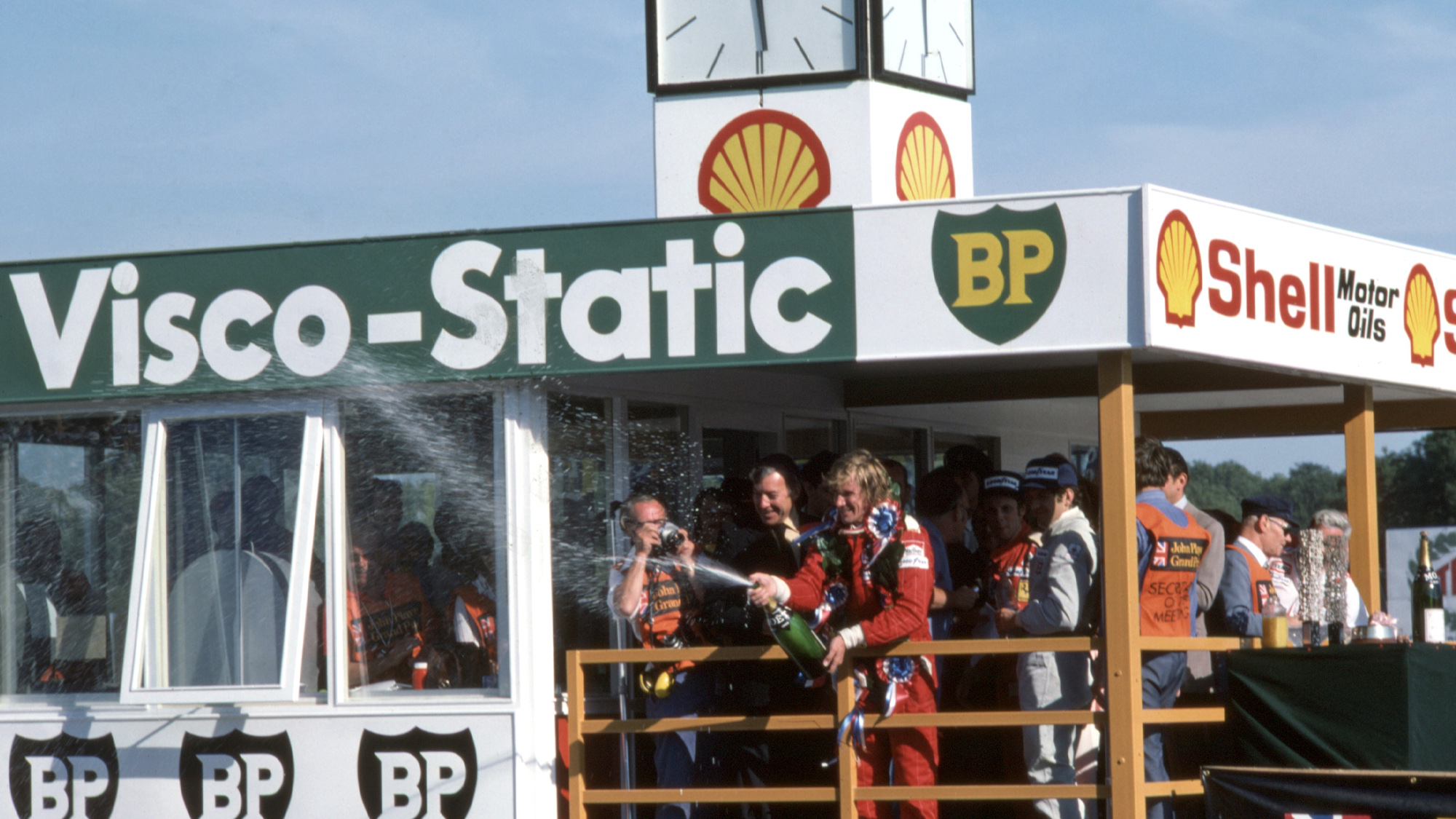 Hunt the winner of the ’76 British GP — on the day

Caldwell was in no doubt that he thought this was Hunt’s best race.

“Fuji got him the championship, but to me the British GP was a far better drive. I always say that was his finest hour.”

Ferrari would eventually appeal the result, winning their case a full two months later. Hunt was disqualified and the points were given to Lauda, much to the chagrin of the McLaren driver and team.

They would fight on though, famously claiming the driver’s championship in the midst of a downpour in Japan.

Whilst that year’s race was just one subplot in what is perhaps the definitive F1 title battle, the event was so action-packed in itself that it is now probably the most famous British Grand Prix of all time – indelibly etched into motor sport history.