In the scale of Stirling Moss’s sporting achievements, the 1958 International Trophy at Silverstone is barely worth a mention.

During the disappointing May weekend, he retired from two races and saw none of the silverware.

But, thanks to a young photographer who accompanied Moss, the apparently unexceptional meeting provided a unique view of a race weekend in the life of Moss. 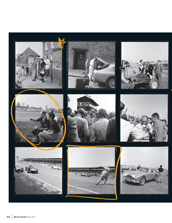 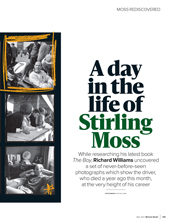 A day in the life of Stirling Moss — at Silverstone, 1958

Close your eyes and think of Stirling Moss racing on a home circuit, and the chances are you will be imagining him at Aintree, where he won the British Grand…

Behind the camera was Michael Ward, an acquaintance of the driver, who would become a distinguished photographer, but was just starting out at the time.

His photojournal starts with images of Stirling and his first wife, Katie, leaving their house, packing the boot of an Aston Martin DB Mark III and heading to Silverstone.

In photographs published in the latest issue of Motor Sport, there are multiple cups of tea drunk; autograph signings and the driver briefing, where Moss is seen standing next to Jack Brabham.

Moss competed in the non-championship F1 race, where he put up a heroic charge in his 2-litre Cooper-Climax T43 but retired with a split gearbox casing, leaving Peter Collins to win in the Ferrari Dino 246.

His second appearance, driving an Aston Martin DBR3 with Tony Brooks in the sport car race also ended prematurely, as he pulled in to the pits after feeling the engine tightening.

The result is a series of photos that show none of the familiar, end-of-race celebrations, but instead offer a comprehensive view of Stirling Moss in his day job.