Lewis Hamilton celebrated his 89th career victory at Spa, two short of Michael Schumacher’s record with 10 races of the season to go.

Behind a very 2020-routine result – Hamilton from Valtteri Bottas and Max Verstappen – lay a treacherous kaleidoscope of circumstances that might have made this race something quite different.

Spa-Francorchamps is not historically a great track for Mercedes. There’s a reason for that. It has dominated the hybrid era with a series of super high downforce cars, albeit pushed along by the best power unit. But this elongated circuit doesn’t reward that downforce as much as more conventional venues – and the concomitant lower drag of a lower downforce car is rewarded to an unusual degree. So the others tend to close up on Mercedes here, sometimes even out-run them.

Red Bull was on the cusp of doing that. But ultimately the underlying advantage of the W11 was enough to see it through even on the least favourable track it has visited this year, helped by a couple of key events outside its control.

On Saturday Verstappen came within a hundredth of a second of spoiling a Mercedes front row lock-out, but on Sunday was stymied by the same tyre concerns as Mercedes and so track position remained the dominant factor. As such, once Hamilton had got to Les Combes on the first lap without anyone slipstreaming past him – always a hazard here – and with Bottas right behind, blocking Verstappen from attacking, the game was set.

But things weren’t quite as normal beneath the radar as the outcome makes it sound. A small clue was the fact that the lead trio were being caught hand-over-fist in the last few laps by Daniel Ricciardo’s Renault, which fell only 3sec short of Verstappen after setting the race’s fastest lap.

The factors below the radar were as follows.

The threat of Sunday rain 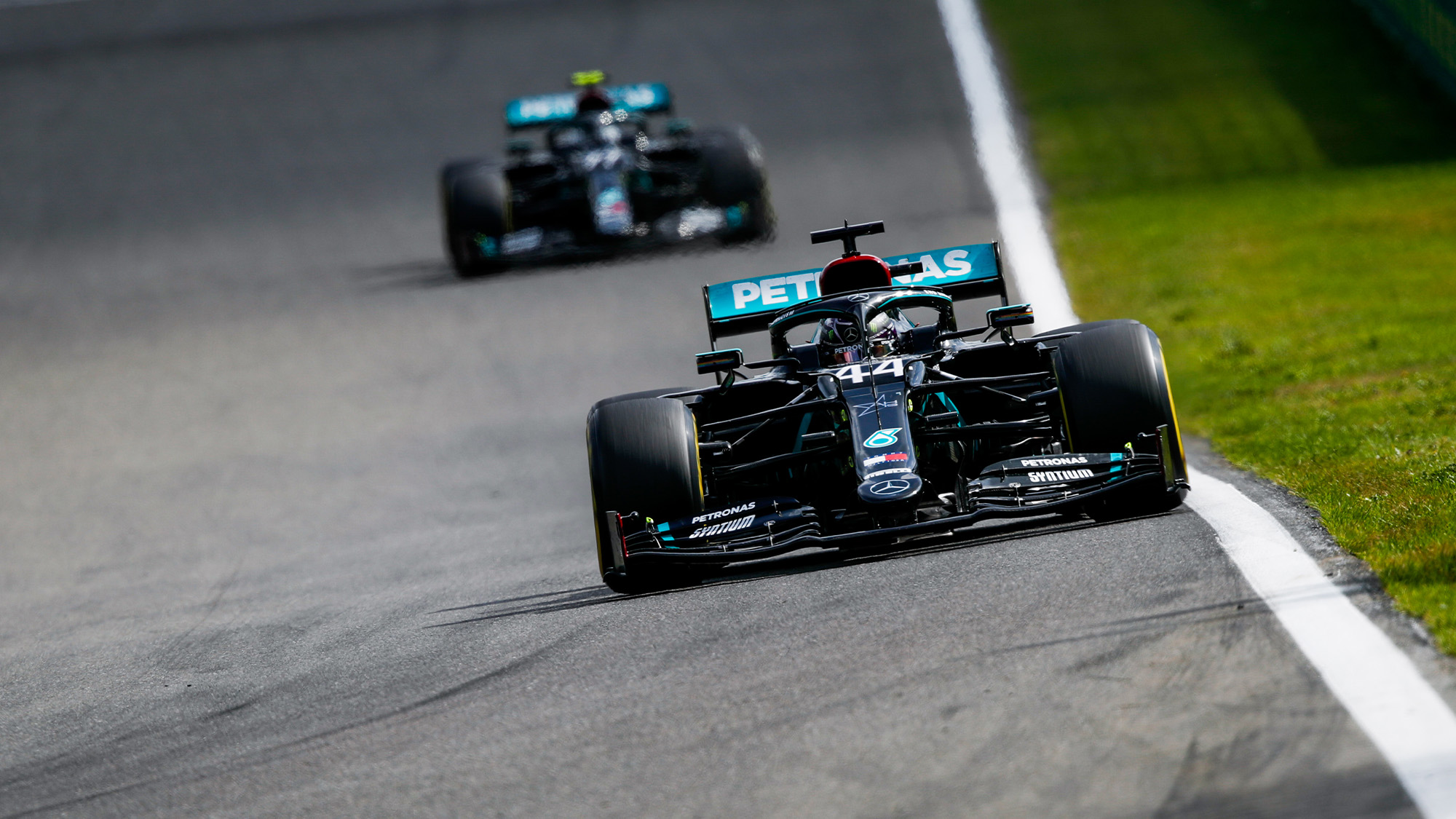 In the days leading up to the race, the forecast was always rain for Sunday. Weather is more difficult to predict in the mini-climate of this valley than most places, but even so F1 teams love data, find it hard to divorce themselves from it.

What that forecast did was skew Red Bull towards the less extreme of its two available low-downforce wings. Which allowed Mercedes to do the same. Because if Red Bull had not chosen that wing Mercedes would have been obliged to go with its lower downforce wing too. The difference in end-of-straight speed would have made it virtually impossible to defend from the Red Bull up to Les Combes otherwise. Both teams had tried both their wings on Friday. The Red Bull seemed to prefer the lower wing, but it was abandoned because of the forecast. The Mercedes definitely was better on the higher wing. The forecast of rain was actually a lucky break for Mercedes.

But the race was long over by the time the rain finally came. In the dry, the higher downforce set-ups overworked the tyres through the sweeps of the middle sector. An early safety car for the Giovinazzi/Russell accidents at Fagnes on lap 10 brought everyone in for new tyres and forced a much longer second stint than planned, rather like at the British Grand Prix with Kvyat’s accident. The two cars with the most downforce – the Mercedes and Red Bull – suffered the most and the lead trio were forced to drive a long way off the pace. 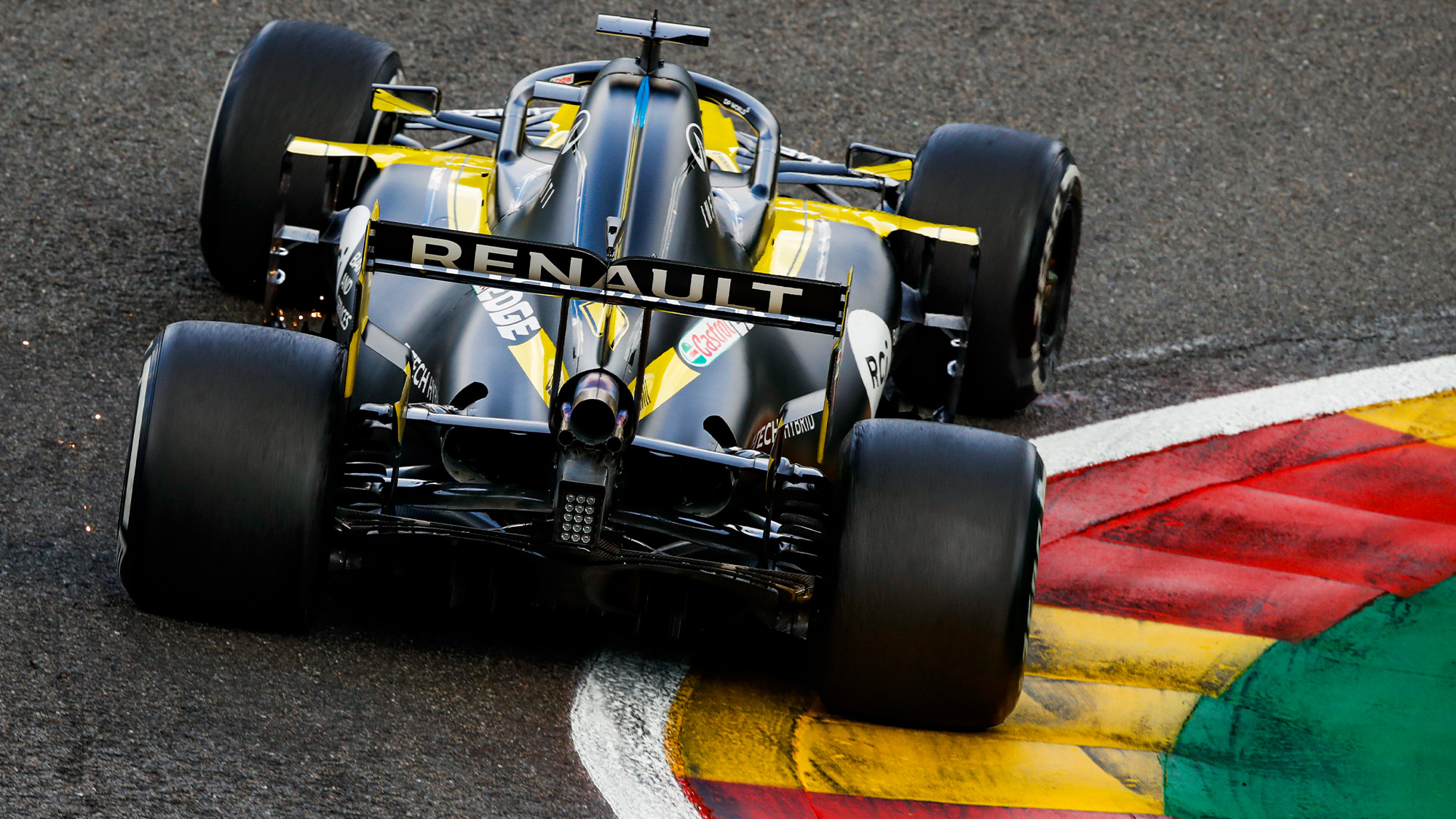 Finishing 3sec behind the leaders, Ricciardo was close to causing mischief

Partly because of the aforementioned nature of the track and the way it rewards low drag cars and isn’t as punishing of lack of downforce as conventional circuits, the Renault was flying. But it was about more than just that: this car, just like last year’s, is in its sweet spot when run in low downforce trim. Both Ricciardo and Esteban Ocon found that it just flows better when not loaded up with wing, feels more connected between front and rear. So that’s where they ran it, with the minimum amount of wing possible – making it super-fast at the end of the straights. Ricciardo qualified his fourth, within a quarter of a second of Bottas and Verstappen, and ran there in the race. He was initially left behind by the lead trio but as they began suffering their high-downforce tyre troubles, he was able to come back at them hard in the closing stages. So hard he was even able to set the race’s fastest lap on the very last lap.

Ricciardo’s speed relative to the tyre-compromised Verstappen rather took Red Bull by surprise – and that had a further implication upon the shape of the race:

Locked Into a One-Stop

Ordinarily, Red Bull might have converted Verstappen into a two-stop once the tyre problem became apparent. That in turn would have given Mercedes the dilemma of whether to respond and whether to do so with one or both cars. 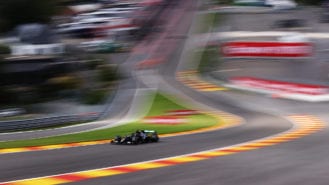 But Red Bull couldn’t do that – because Ricciardo was never far enough back. The speed of the Renault was locking Verstappen into the one-stop stalemate. Sure, he’d have been way faster than Ricciardo on a fresh set of tyres. But the difference in end-of-straight speeds between the Red Bull and Renault would likely have made it impossible to pass.

So, locked together into a tyre-conserving slow pace in the late stages, unable to do any actual racing, Hamilton, Bottas and Verstappen squeaked home with a few seconds between them. Another three laps and Ricciardo would have been among them – and a sensation might have unfolded. Next is Monza – where the Renault is expected to be even better.