Max Verstappen stamped his authority on this race right from the start despite qualifying his Red Bull only third. Lewis Hamilton, having qualified his Mercedes on pole, became the chaser within a few seconds of the gantry lights going out. There was a brief window around the pit stops where Hamilton might have been able to turn the tables, but that chance floundered upon a sticky front wheel.

Temperatures were the dominant driving factor in both race and qualifying.

Tyre temperatures were behind the slightly different competitive picture to that seen in Bahrain three weeks ago when Red Bull’s advantage in qualifying was more clear-cut. “Here we were very rarely over the temperature [threshold] of the tyres,” said Hamilton after qualifying, “unlike in Bahrain, and that’s brought us more into line with the Red Bulls.”

Imola’s surface and layout does not create anything like the same thermal stress as Sakhir’s. Which allowed Mercedes access to a set up which gave a less understeery balance to that which was needed there to protect the rear tyres. But rather like at Istanbul last year, for Mercedes the problem became getting the tyres to run hot enough. Or rather getting them up to their operating temperature quickly enough. In Bahrain they ran too hot, here they were sometimes not hot enough. 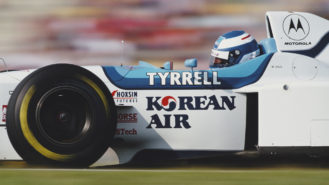 Valtteri Bottas was fastest in both Friday practice sessions but his times were typically coming on the second or even third lap of his runs. He was quick in Q1 too, but it took three laps to set the time, such was the reluctance of the tyre to come up to temperature. It was a luxury that couldn’t be afforded in the shorter Q3 session if he wanted to use two sets of fresh tyres. On neither of his Q3 laps were either the fronts or rears hot enough at the beginning of the lap and he had problems at the Tamburello chicane (Turns One-Two) on both occasions. That time from his three-lap run in Q1 remained the fastest he would set and would have qualified him on the second row if he’d done it in Q3.

Bottas, with a less aggressive driving style, is always more prone to being tripped up by any under-temperature tendency than Hamilton. Recall last year at Istanbul when he was lapped by the victorious Hamilton, yet set the second-fastest lap of the race once his tyres came up to temperature. It was a very similar story at Imola.

The Red Bull had no problem in this regard at either Bahrain or Imola for reasons which might be connected to its very different aerodynamic philosophy. The set-up window of the Mercedes with the regulation aero changes of this season has been narrowed considerably.

The way the differing tyre traits of the two cars played out in the wet first part of the race saw Verstappen quickly building up a big lead, with Hamilton struggling to get adequate temperature into his intermediate tyres. It was not quite as acute a problem as in Istanbul last year but the pattern was remarkably similar.

It took until lap 11 before Hamilton was able to match Verstappen’s times, by which time the Red Bull had a 5sec lead. For the next 10 laps or so Hamilton was able to maintain that gap but couldn’t close it. But as the track began to dry out, Verstappen was in a tricky situation. It was still too wet for slicks but his inters were becoming worn out. Hamilton, because he’d not been able to put the same loads through the tyres when they were running cool, had more tyre left and began to catch the Red Bull. By the 26th lap he had the gap down to 2sec and was lapping up to 1sec quicker. 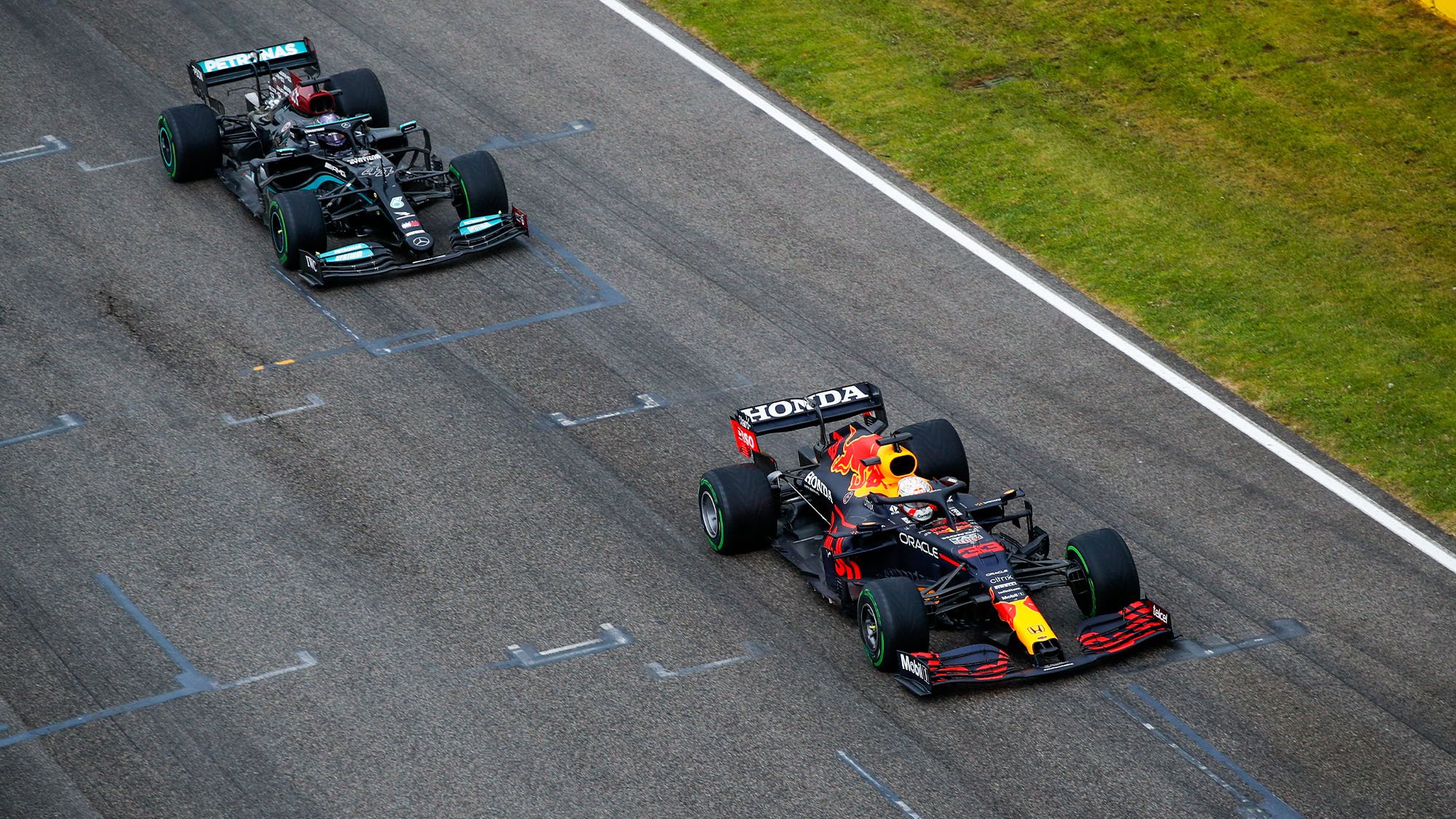 Verstappen had an early advantage with the intermediates, but Hamilton closed the gap

The track dried enough for slicks just about in time to rescue Verstappen. He was brought in on lap 27. Hamilton now let rip on his in-lap, trying to overcut his way ahead. Giving some indication of how much more tyre he had, that in-lap was 1.3sec faster than Verstappen’s whose lead was very much in the balance at this moment. But it was going to be close. For Hamilton to take the lead was going to require a super-quick Mercedes pitstop.

Here’s where it all went wrong for Hamilton. The stop took twice as long as Red Bull’s – because of a delay detaching both front wheels. At the time of writing a definitive cause hadn’t been established but it was suspected that the wheels were sticky in coming off because of the extra heat in them created by the wet weather setting used for the carbon shrouds around the brake discs. In the wet these are typically set to maximise the heat directed from the brakes and wheel rim into the tyre – because of that slow warm-up problem. 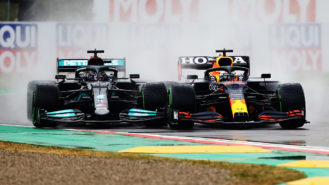 A pre-race rain shower added extra drama to the 2021 Emilia Romagna Grand Prix, as Max Verstappen put in an - almost - perfect performance and rivals slipped up

The combined delay at the stop and the slow warm-up of the fresh slicks meant Hamilton trailed Verstappen by 5sec at the end of his out-lap.  Hamilton almost got another bite at the cherry as Verstappen was delayed lapping a gaggle of cars at a particularly awkward part of the track and it was when trying to take advantage of this that Hamilton made a risky lapping attempt on George Russell, off the dry line down the inside into Tosa. It put him in the gravel trap and he went a lap down while he manoeuvred out of there.

Verstappen from that moment was assured of the victory, he and the Red Bull simply a more consistently quick combination that Hamilton and the Mercedes on this weekend.

But that Mercedes tyre temperature problem played its part in rescuing Hamilton’s day from oblivion.

Bottas had not at any point managed to get the tyres up to that critical threshold where they begin to work properly. Being stuck in the pack just made the problem worse. He was whole seconds off the pace on both the inters and slicks.

He was running in a lapped ninth place between Lance Stroll’s Aston Martin and Russell’s Williams as Hamilton was trying to get out of the Tosa gravel trap. Russell’s new tyres were up to temperature and he was close enough to be armed with DRS as they raced down the pit straight on the 29th lap. Russell’s attempted pass around the outside of the kink before the Tamburello chicane went horribly wrong. Sensing that Bottas was squeezing him and on the damp line, he got a rear wheel on the grass which flicked him hard into the side of the Mercedes and an enormous, race-stopping accident played out. 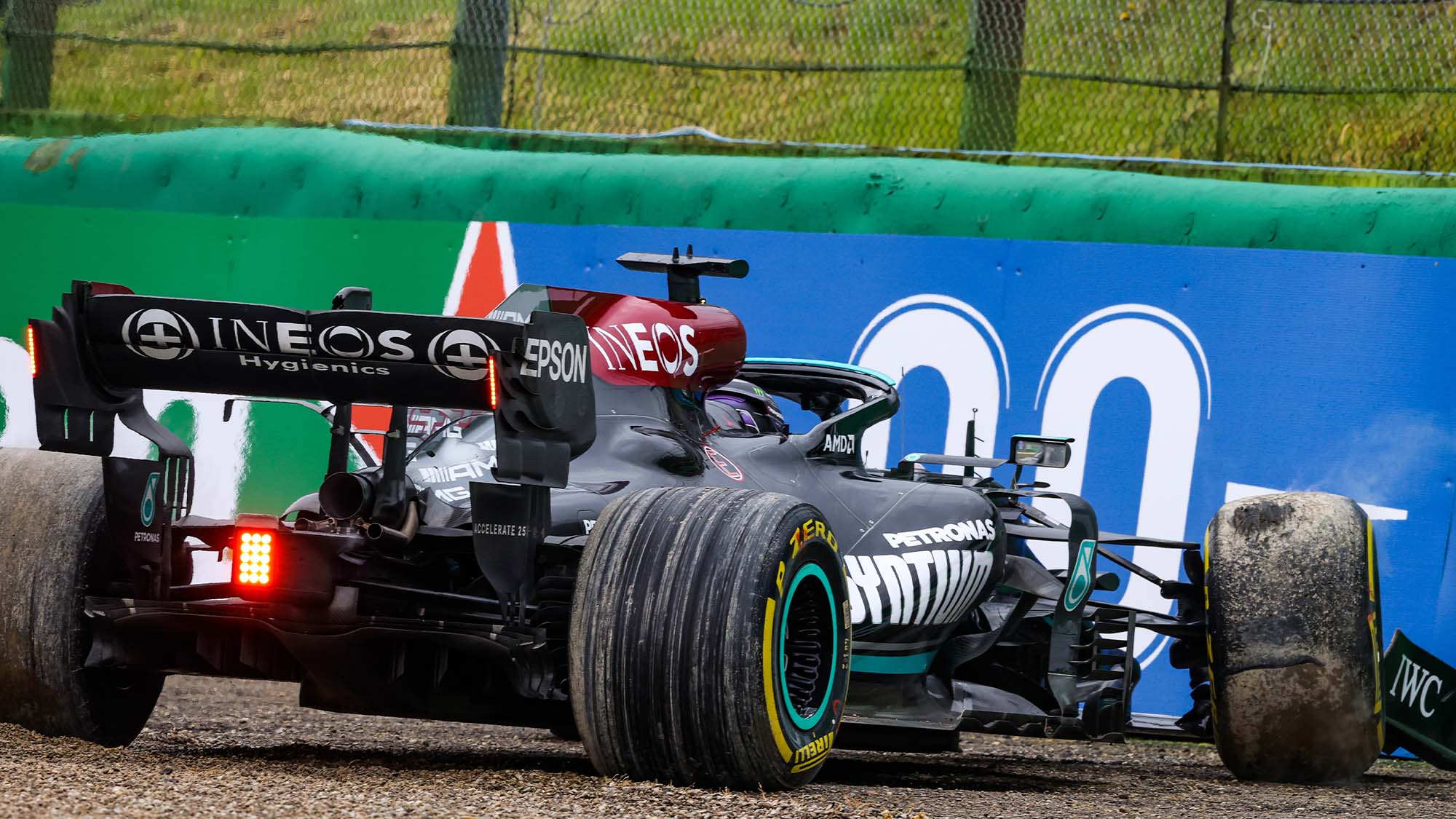 Risky pass ended with Hamilton off the track

This happened just as Hamilton was making his way back to the pits from the gravel trap with his broken front wing and the race stoppage got him the lap back, just as it would under a normal safety car. It meant he began the restarted race (in ninth) with the leaders just a few seconds ahead rather than a minute-and-a-half.  From there he was able to charge back to second.

The last of those he passed was the McLaren of Lando Norris who drove a superb race to third after having had his third-fastest qualifying time disallowed for straying beyond the track limits at Piratella. Quicker tyre warm-up was the thinking behind McLaren putting him on soft tyres for the restart. It was this which helped him get straight past Charles Leclerc’s medium-shod Ferrari upon the restart.

It was a day all about temperatures and Verstappen’s mastery.