When Carlo Ubbiali contested the first-ever 125cc grand prix at Berne in Switzerland, on July 3, 1949, Europe was still bloody and broken from the Second World War. Riders from that era remember travelling to meetings – in beat-up vans or towing their bikes on trailers – through a landscape still pockmarked by six years of conflict. But they didn’t want to think about the past, they only cared about the future.

On that day at Berne, Ubbiali finished fourth aboard an MV Agusta, supplied by the company that had spent the war manufacturing bombers and other military aircraft for the Italian war effort. The terms of the 1947 Paris peace treaties banned Construzioni Aeronautiche Agusta and other Italian aviation businesses from building planes, so Count Domenico Agusta retooled his factory for motorcycle production.

His nine world titles and 39 GP wins were an amazing achievement at a time when simply staying alive was quite a challenge.

The machine Ubbiali rode at Berne was the legendary Italian brand’s first GP bike, a humble little two-stroke that made ten and half horsepower. In fact, the machine was a copy of Germany’s pre-war DKW RT125, the blueprints of which were made available to anyone who wanted them after the war. BSA, Harley Davidson and Moto Morini also built copies of the RT125.

At 19-years-old Ubbiali may well have been the youngest rider on the grid at Berne, because most riders contesting the inaugural season of world championship racing were returning to the sport they’d enjoyed during the 1930s, after fighting in the war.

Ubbiali went on to become the most successful GP rider of the first decade of world championship racing. Even now, only Giacomo Agostini and Ángel Nieto have bettered his nine world crowns, while Mike Hailwood and Valentino Rossi have equalled his accomplishment. This is the measure of the man, who remained less well known than many less successful racers because he never moved beyond the 125 and 250 categories.

His nine world titles and 39 GP wins between 1950 and 1960 were an amazing achievement at a time when simply staying alive was quite a challenge. Ubbiali was a quiet, thoughtful racer, who used his intelligence both to survive and win.

His favourite tactic was to follow the leader, conserving himself and his motorcycle, while studying his rival’s strong points and weak points, before attacking in the closing stages. No wonder they called him The Fox.

Two months after his GP debut Ubbiali briefly returned to his first love – enduros – when he contested the International Six Days trial in Llandrindod Wells, Wales, also on an MV 125. He won a gold medal in that event, despite being hit by a car. Among the British team in the 1949 ISDT was commentator Murray Walker, riding a Norton. 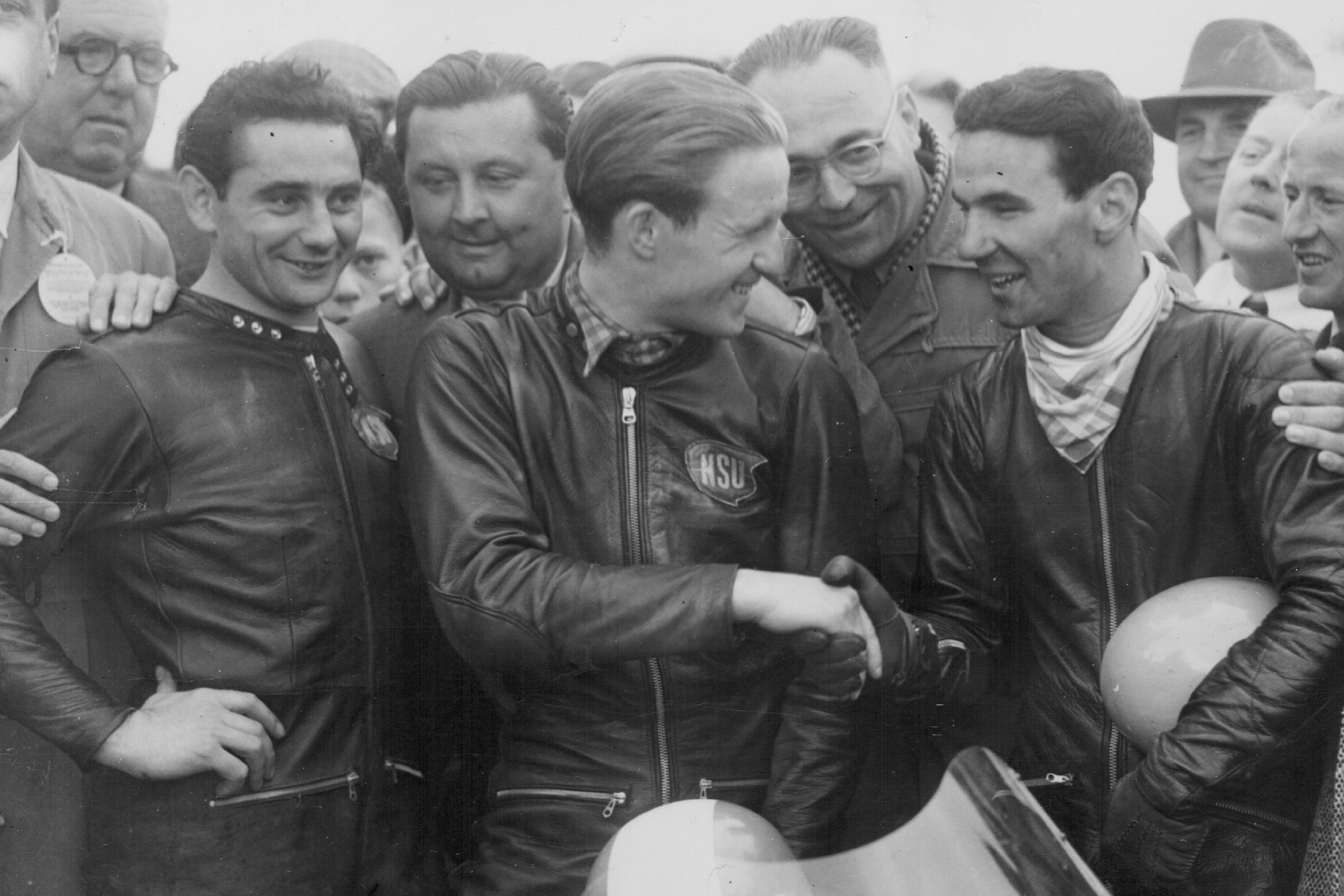 Although at that time most 125 GP bikes were two-strokes, the 1949 125cc world title was won by the only four-stroke in the championship, built by Bolognese brand Mondial. The company’s double-overhead-cam 125 was an important step in grand prix technology, so much so that Soichiro Honda bought one when he first visited Europe in 1954 and took it home to Japan where he was preparing his company’s entry into GP racing.

Ubbiali switched to Mondial in 1950 and won his first GP that August, around the Clady circuit outside Belfast, where he beat team-mate Bruno Ruffo by 65 seconds. This was a memorable race, with only three starters and two finishers.

The following year Ubbiali won his first world title, with victory at Monza and second-place finishes at the Isle of Man TT and Montjuic Park, Spain. 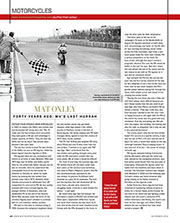 Forty years ago: MV’s last hurrah MotoGP four-strokes were introduced in 2002 to replace the 500cc two-strokes that had dominated GP racing since the ’70s. To make sure the four-strokes…

In 1952 he lost the title to MV Agusta’s first world champion Cecil Sandford, so in 1953 he rejoined Count Domenico Agusta’s team and stayed there for the rest of his career. In 1955 he made the Count a very happy man (not an easy thing to do) when he became MV’s first Italian world champion, in the 125 class. The next summer he added MV’s first 250 world title to another 125 crown, giving the Count the first of many title doubles.

Despite Ubbiali’s domination of the smaller categories, Count Agusta never promoted him to the 350cc or 500cc classes, because in those days riders were usually allocated to categories according to their size, and Ubbiali wasn’t a big man.

In 1959 grand prix technology changed once again, when Ubbiali lost the Italian GP at Monza by a fraction of a second to East German Ernst Degner, riding a two-stroke MZ. This was the first 125 GP victory by a two-stroke, thanks to the genius of MZ engineer Walter Kaaden. From then on the four-stroke’s days as a GP force were numbered.

Count Agusta saw the writing on the wall, because not only were two-strokes getting faster and faster, his company and his considerable ego were also threatened by an entirely new force in GP racing: the Japanese factories. At the end of the 1960 season, during which Ubbiali took his third 125/250 title double for MV, the Count withdrew from the smaller classes, where the two-strokes and Honda’s multi-cylinder four-strokes were taking over. 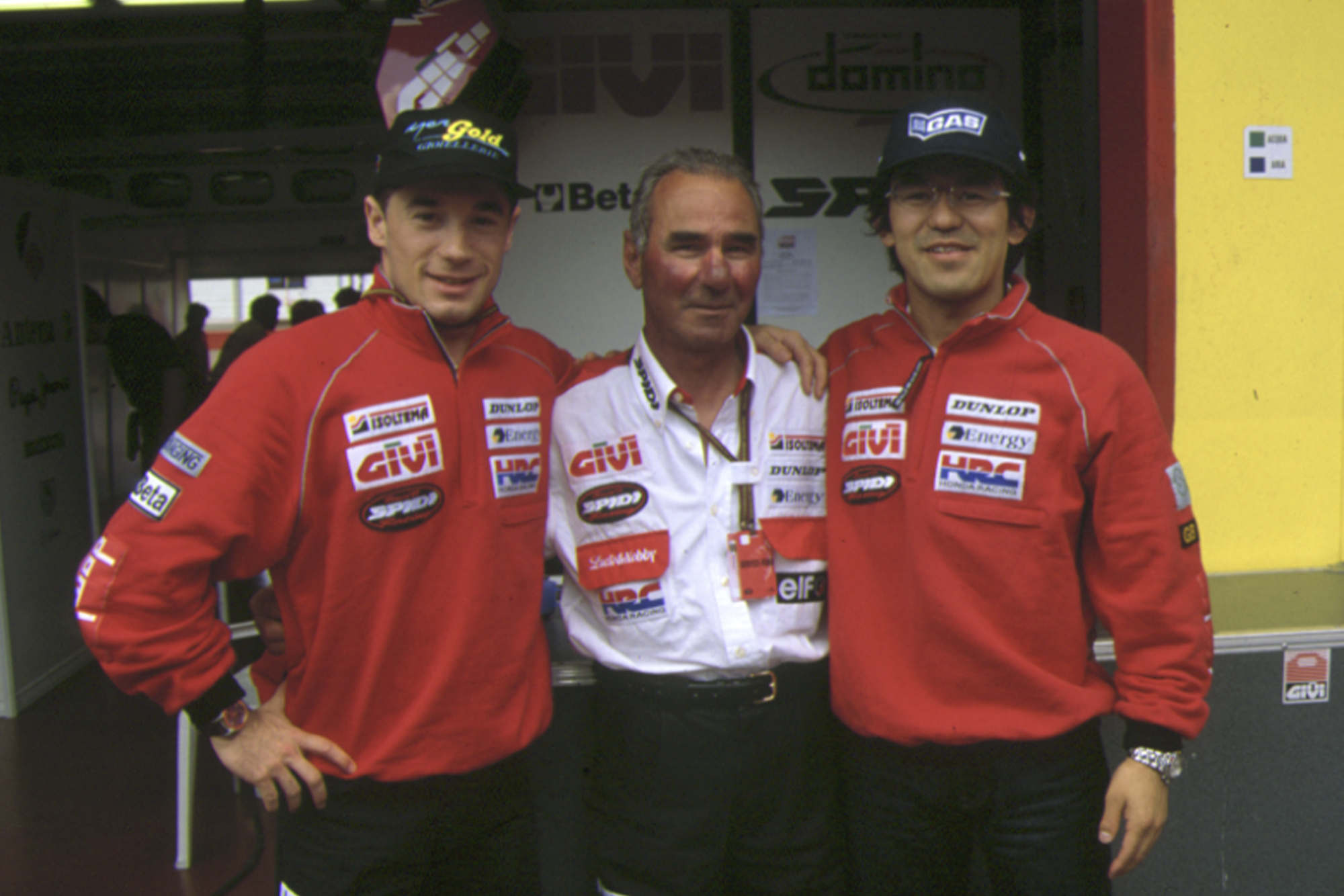 Ubbiali, recently married and broken-hearted by the death of his brother Maurizio, took MV’s withdrawal as the signal to retire.

He remained involved in racing, encouraging a very young Agostini – they both hailed from the city of Bergamo – in the early stages of Ago’s career and helping him sign with MV Agusta in 1964.

In 1998 Ubbiali once again became a GP regular when he joined Lucio Cecchinello’s team, which fielded Cecchinello and Nobby Ueda in the 125 world championship. LCR was backed by Italian accessory brand Givi, whose founder Giuseppe Visenzi was good friends with Ubbiali and appointed him as brand ambassador to the team.

“He could learn tracks quite quickly and then he worked hard at being precise with the brakes, with the throttle, with his lines”

“At this time no team had spotters out on the track, but Carlo became like a spotter for us, although he was from such a different era that we didn’t think he could give us any useful advice,” recalls Cecchinello. “In reality he was often very helpful, because he would watch around the track and then come back to the garage, where he would tell us, ‘Kazuto Sakata is a bit tighter into Turn Four’, or ‘Tomomi Manako can hold second gear all the way between Turn Six and Seven, so maybe you should raise your gearing’.

“Carlo told me many great stories, like when he travelled all the way from Bergamo to Wales by train, when he was only 19 and couldn’t speak a word of English! I was amazed by that.”

“He said his strong point was that he was always very, very precise. He could learn tracks quite quickly and then he worked hard at being precise with the brakes, with the throttle, with his lines, at a time when the tracks and the bikes made it very easy to make mistakes. Carlo was very shy, quiet and reserved. He was also tough, but always very straight in his dealings with people.”

Ubbiali passed away on Tuesday, after contracting Covid-19.