“I was feeling a bit grumpy, I had the hump,” says TT winner Trevor Nation, explaining the reasoning behind his epic 2000-mile ride aboard a GSX-R750 to take part in the Portuguese and Spanish rounds of the 1985 TT F1 world series.

Nation’s main ride – a Suzuki RG500 GP bike – was out of action, so he was kicking his heels at home, depressed at the thought of having to miss the next round of the British championship. Then he had an idea: why not head south to contest back-to-back F1 street races on the Iberian Peninsula? Two problems: first, he had no bike; second, this was Tuesday and practice was due to start at Vila Real, in northern Portugal, on Thursday.

“With the RG in bits I had nothing else to do, so I called Alec [Hammond, boss of Oxford Products, Nation’s main sponsor] and asked if I could take his GSX-R750 which I’d ridden in the proddie TT a few weeks earlier. I think I must’ve faxed my entry at the last moment and by the time I’d decided to go it was already too late to make it in a van. I couldn’t even get the ferry to Santander [in northern Spain] because it had already left, so I rode from Salisbury to Portsmouth and got the ferry to Saint Malo.”

“Practice had already started when I arrived, so I dumped my kit off and practised on the bike as it was”

Nation – an amiable giant of a man who speaks in a quiet Wiltshire burr – left home at the crack of dawn on Wednesday, attired in a black tasselled leather jacket, jeans and Frank Thomas boots. Ahead of him he had the English Channel and a thousand miles of French, Spanish and Portuguese roads. He needed to be at Vila Real the following evening.

“I definitely had me adventure head on. I was cooking on, flat-out, averaging about 100 miles an hour, keeping my wits about me. I had a little tent on the back, some throw-over panniers and then a big bag on top with my leathers in there and a Michelin rear slick on top of all that. One pannier had my clothes, the other had some tools, the GSX-R’s front racing number plate and some food: breakfast cereal and a few cans and cartons. On my way to the ferry I heard this funny popping noise from the back. The right-side pannier had sat down on the exhaust and a carton of milk had exploded. That was the first little glitch.”

By Wednesday evening Nation had made it to Biarritz, France’s surfer capital, just north of the Spanish border. He pitched his tent and got some kip. When he awoke the next morning he still had 500 miles ahead of him – with few major roads in northern Spain – and first practice was due to get underway at teatime.

“Then I went and got a puncture – the bike was still running the same Metzelers I’d used in the proddie TT. I was thinking I was going to struggle to get to Vila Real in time and I was wondering if I should fit the slick or what should I do? So I took the screw out of the headlamp surround and screwed it into the hole in the back tyre. I’d fixed enough tyres with screws and nails, so I thought I might as well try.”

The bodge worked and Nation arrived at Vila Real just in time. “What a fantastic feeling – I’d set out to get there and I’d got there! Practice had already started when I arrived, so I dumped my kit off and practised on the bike as it was. I actually did first practice using the tyre with the screw still in there.”

Vila Real was a scary, high-speed street circuit running through towns and villages near the eponymous city, home of Mateus Rose wine.

In the race, Nation was running an impressive fifth – behind Joey Dunlop, Graeme McGregor, Mick Grant, and Gary Padgett – when the GSX-R’s gear linkage fell apart. Time to visit the pits for another bodge; this time involving a cable tie and a hammer. Again, the trick worked. Nation finished the race out of the points and out of the money but nonetheless a happy man. After all, he had achieved a minor miracle.

“I’d made enough from start money, so I didn’t have to dig in my pocket, so that was fine.”

“Apart from that problem with the gear linkage I didn’t have to do anything to the bike the whole trip, apart from putting petrol and oil in the thing.’

The race – won by Dunlop aboard a factory RVF ahead of McGregor and Grant on factory Suzuki F1 bikes – ended in chaos with a full-on pit-lane brawl between Dunlop’s Honda crew and some local mechanics. Honda team boss Barry Symmons suffered three cracked ribs and a broken toe in the melee.

“It was quite hot, so I was riding along in a T-shirt. When I got to the east coast I had a few days to kill before practice, so I got a cheap B&B north of Barcelona and got some kip. That was luxury, I didn’t want to be camping all week – I wanted to get me head straight.”

“Beating the gearshift shaft back into place at Vila Real had put a little fracture in the casing, so when that chunk of casing broke, that was that. My race was over.”

In fact, this disappointment was no curse, it was a huge blessing. The very next lap McGladdery’s engine blew, spewing oil across the track through a high-speed section of the parkland circuit. This was the first year of Suzuki’s seminal supersport bike and tuned GSX-R engines were dangerously fragile. The next six riders crashed on McGladdery’s oil. Tony Rutter – riding a Ducati v-twin – sustained serious injuries in the pile-up that ended his racing career. 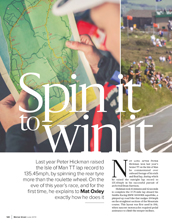 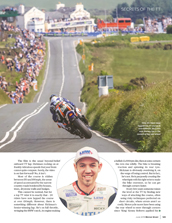 Not long after Peter Hickman won last year’s Senior TT on the Isle of Man he commentated over onboard footage of his sixth and final lap, during which he raised…

After the race, Nation managed to hitch a lift home in a coach belonging to another British rider.

“It was a good trip. I remember getting home and working out that it had paid for itself. I’d made enough from start money, so I didn’t have to dig in my pocket, so that was fine.”

A few weeks after that Nation took victory in the Scarborough Superstock round, beating Grant’s GSX-R. And at the Brands Hatch season finale he beat Suzuki GP rider Rob McElnea, then at the very top of his game. “I won from McElnea by nothing. That was a hell of a race, a good ’un!”

Nation is very keen to be reunited with that very special GSX-R750. If anyone knows the whereabouts of B29 TRU, please contact us.