The trouble with Andrea Dovizioso is that he doesn’t have a killer’s instinct. Dovi at the 2019 Austrian Grand Prix: “Hold my beer…” 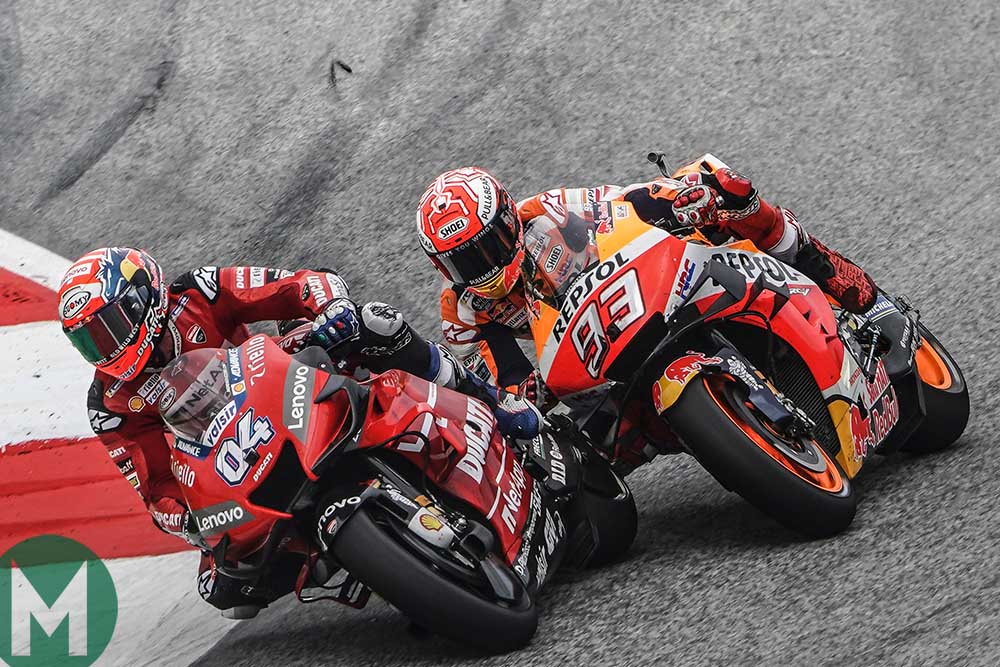 Dovizioso and Marquez were this close time and again​ Photo: Ducati

Front brake guards were made compulsory some years ago to stop nasty accidents when two racers collide and the impact squeezes someone’s brake lever, locks the front tyre and sends the rider hurtling to the ground. You can see the drama that unfolds when this happens on a YouTube video of Jeremy McWilliams tagging Roberto Rolfo during the 1998 250cc Catalan GP.

At Red Bull Ring on Sunday Marc Márquez’s brake guard nearly did for him. When Andrea Dovizioso dived past him at the last corner (Turn Ten), the Honda’s brake guard got hooked onto the left side of the Ducati’s swingarm. Which gives you an idea of the lean angles involved.

“I was thinking I could stop my bike and come back on Dovi like he did on me two years ago here, but my brake guard became attached to his bike,” said Márquez. “I was thinking I would crash but then the guard broke and I didn’t crash.”

Dovizioso already had Márquez beaten at this point, the Italian unleashing a final-turn attack that was more Marquez the Merciless than Dovizioso. This move showed a new side to MotoGP’s so-called Professor, perhaps born out of his desperation of getting beaten at nine races in a row. And if this attack on his greatest rival means that he has finally found the killer instinct he has always lacked then it won’t be long before people will be calling him Dovi the Demoniacal.

It was a stunning move – an executioner’s sweep of the axe, administered with cold-blooded precision – and Márquez took his punishment like a man. Like he always does. When someone does to the young Spaniard what he usually does to them he doesn’t complain, he just keeps grinning through the disappointment, because win or lose, that’s how he races. And letting his rivals know they’ve got to him is the last thing he wants to do, even at Red Bull Ring where he dearly wanted to defeat Ducati at the Italian factory’s favourite track.

“There is always respect between us two and there was just a small contact at the last corner,” said the reigning world champion who lost the pair’s latest battle by two tenths of a second. “But this is part of racing and I like it!” 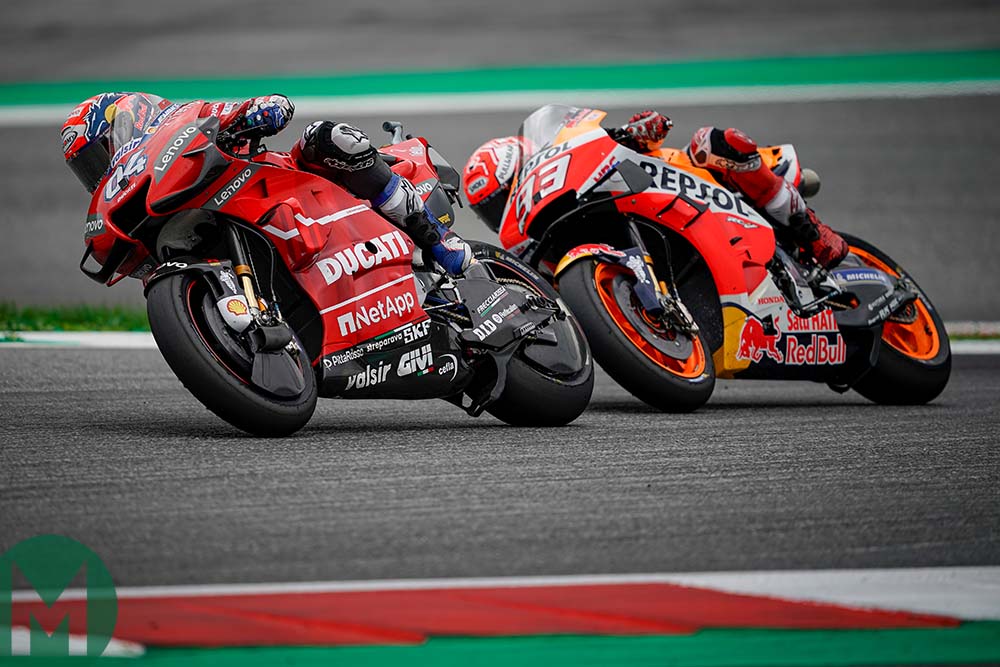 Even Dovizioso seemed a bit surprised at himself.

“I didn’t prepare the last corner like that,” he said. “It isn’t my style, but a lot of things had happened during the race.”

He wasn’t wrong. The pair had fought their duel from the end of the eighth lap, when Márquez took the lead from Dovizioso, all the way to the end of the 28th lap.

They didn’t collide once until the final corner, but they often came very, very close, even though the daunting 195mph/315kmh sweep towards Turn Three.

During those last ten laps both riders played with each other, prodding and probing, experimenting with different lines at different corners, looking for the tiniest advantage they might be able to exploit when the inevitable showdown came.

Dovizioso was the craftiest, using all his age and guile to deal with his most deadly rival.

“During the last six or seven laps Dovi was playing with me – he was closing the gas on the straights,” said Márquez, who stole an accusing look at the Italian as they sped down the start/finish with ten laps to go.

What he means is this: if you motor past your rival on the straight you leave him the option to retake you on the inside on the brakes. But if you ease off the throttle and stay level with him – on his left if you’re approaching a left-hander and on his right if you’re approaching a right-hander – then he has no chance to out-brake you, except around the outside, which won’t work.

As the race continued into its crucial phase both riders knew that Dovizioso had the better rear grip. Sunday was much cooler than Saturday – down from 48 degrees track temperature to 32 degrees – a huge difference. And Ducati had made the best tyre choice, choosing the soft rear while Márquez ran the medium; the opposite of their choices at Brno the previous Sunday, where Márquez won.

“We didn’t have the same speed as Marc had in practice, so we needed a strategy to try to stay with him in the race,” said Dovizioso. “The temperature changed from yesterday, so we made a different tyre choice. Maybe that had an effect.”

Indeed it did, because Dovizioso raced with the soft rear tyre, while Márquez chose the medium compound, which caused him problems both entering and exiting right-handers.

“When Marc overtook me [on lap eight] and pushed to make a gap I could see his rear tyre was dropping too much. At the end, I had the chance to fight at the last corner because he didn’t have the same grip as I had on the right side. I wasn’t faster than him but at the end I had more grip.

“In braking he was better than me, but with the rear grip I had I could stay with him and make that crazy last corner. I didn’t prepare it, but I did Turn Nine perfectly, so I was a bit inside him and I thought, okay, if I go wide at the last corner I will still finish second. But I stopped the bike in the right way. I’m so happy for Ducati because we needed this victory. It gives us a lot of energy for the future.”

The last corner was obviously a role reversal of the pair’s 2017 last-corner duel. Well, very nearly. On that occasion Márquez had slung his RC213V inside the Desmosedici, but ran wide, allowing Dovizioso to cut back inside and beat him to the line, as he has done on various occasions since.

Márquez knew he had made the wrong rear-tyre choice within seconds of the start. “Already when I exited the first corner on the first lap I said to myself, pah, the grip is not there. We were thinking of racing the soft but the temperature was increasing before the start, so we thought the medium would work better to the last lap but the reality was completely the opposite. But Dovi rode an incredible race.”

Dovizioso was delighted to maintain Ducati’s unbeaten run at Red Bull Ring, which is basically three drag strips, the slow-speed turns one, three and ten all followed by long straights

“The Ducati is always strong here,” he added. “There is a lot of strong acceleration and not many long corners [which highlight the Ducati’s poor turning]. We accelerate very well and we have more speed in fifth and sixth gears. Also we can brake quite well, not like Marc, but very, very close. This is why we are very competitive here.” 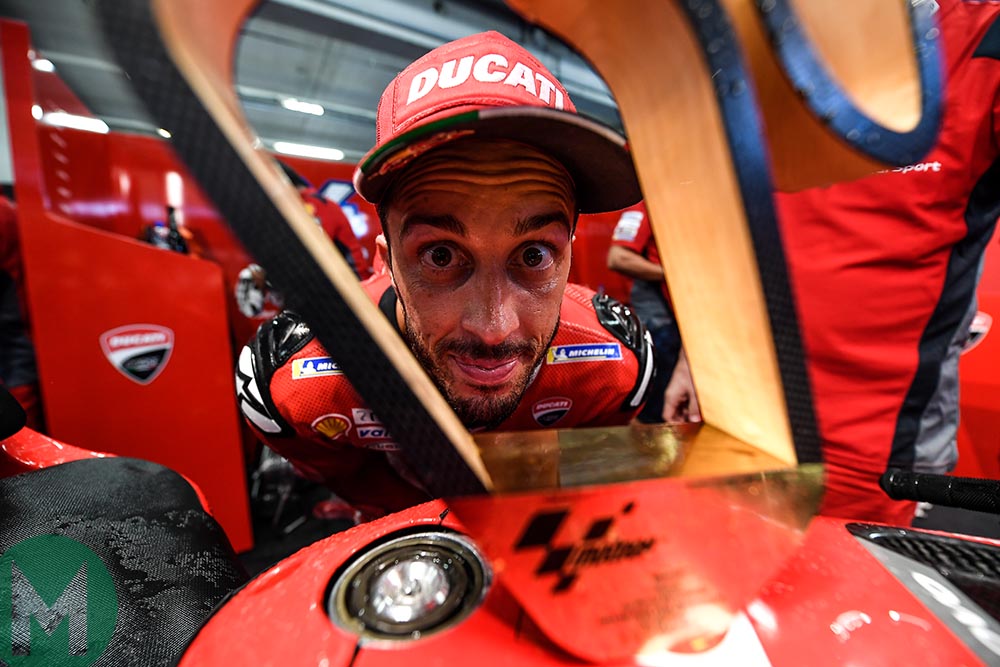 Unusually, Márquez raced with three new parts on Sunday: HRC’s carbon-fibre-coated frame, new aerodynamics and a new swingarm attachment, similarly to the unit controversially debuted by Ducati at the season-opening Qatar GP. No doubt, this wouldn’t have happened if he hadn’t gone into the race with a 63-point title lead, which is allowing him to experiment in races, already gathering valuable development data.

“We used the new frame because its potential here was better,” he said. “But at the next race at Silverstone we will again compare both in practice.”

Márquez will arrive in Britain next week leading Dovizioso by 58 points with eight races to go, which means the Italian has to better the Spaniard by at least five points at every race to win the title. Very, very unlikely, but not impossible, if Marquez hits problems.

“I expect Marc to be strong at every racetrack, so it will be very, very difficult,” said Dovizioso. “We are always working to improve the bike and you never know what you will find. But to fight against Marc at the moment is very difficult. We have to improve because we don’t have enough to beat him.”

Márquez is currently on the form of his life. From this year’s 11 races he has won five, finished second in five and crashed out of the other, while leading.

The five-times MotoGP champion still won’t talk about the championship, but he can’t help but be confident. “The most important thing is that when we struggle we can finish just two tenths behind the winner. And when we have a strong feeling with the bike we can go away. This is the way to fight for the championship.”