MotoGP’s 2022 rider line-up is far from settled as the series heads into its summer break with plenty of questions still in need of answering and a few seats ripe for the taking.

The latest news from the paddock is that Yamaha and Maverick Viñales will part ways at the end of the season after both parties agreed to an early termination of a two-year deal.

It leaves the Spaniard as one of the top riders without a confirmed ride next season though he isn’t short of options.

Plenty of rumours have linked him with Aprilia for next season though there is only one space there and Andrea Dovizioso has been testing extensively with the team during his year away from racing.

Plus, there’s yet another Ducati team on the grid next year with Valentino Rossi’s VR46 outfit yet to confirm either of its riders for next season. Could Viñales fit in there or will the man himself make the switch to his eponymous team?

And where does Franco Morbidelli stand in all of this? Less than impressed with his hand-me-down equipment for 2021, is the Italian rider satisfied with an updated bike at Petronas SRT for yet another season?

Here is a rundown of the latest news and rumours as the 2022 MotoGP season takes shape. 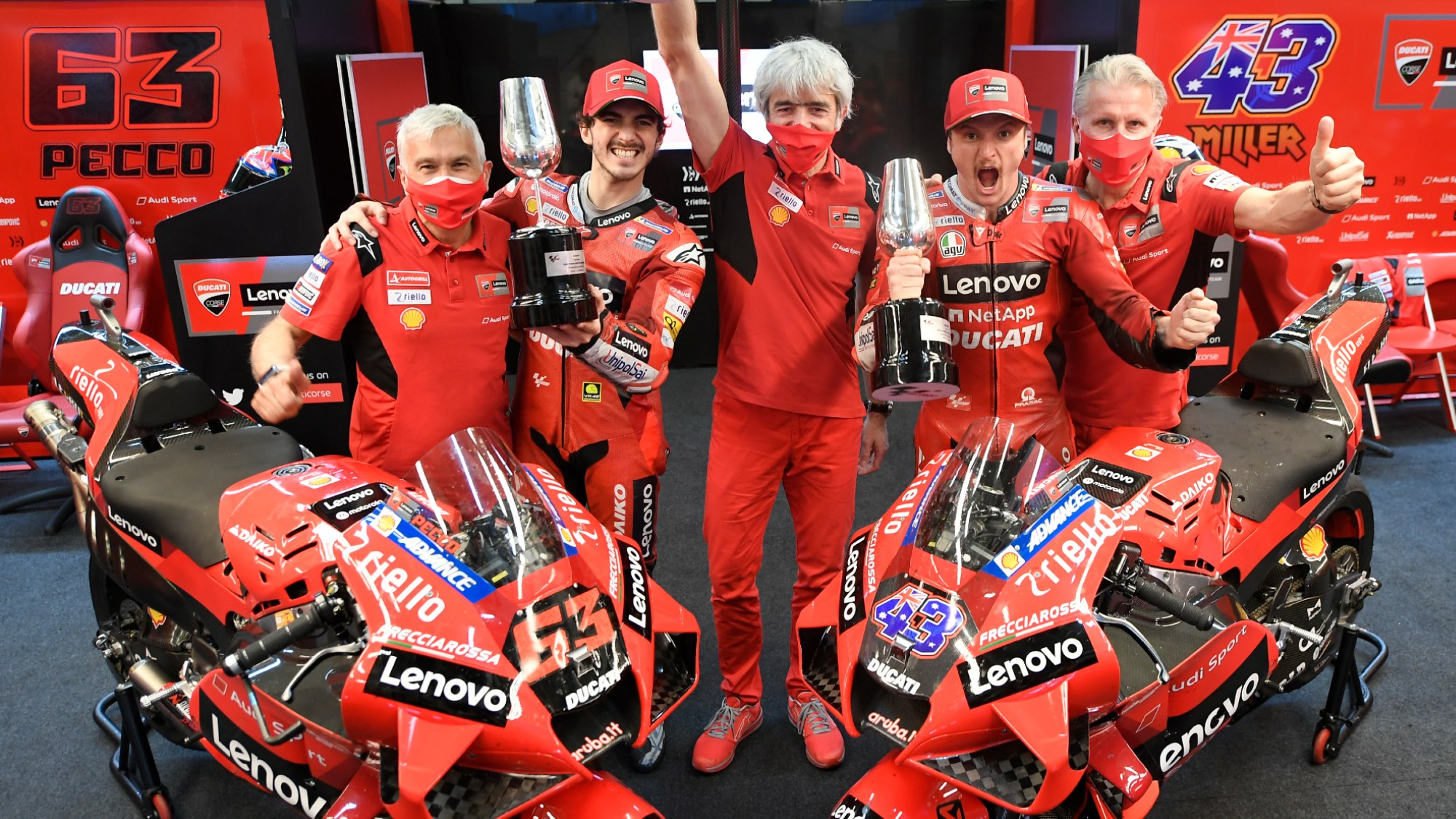 Ducati will keep both of its riders for next season

It’s as you were at Ducati with both Pecco Bagnaia and Jack Miller staying on with the team for 2022. The Italian rider was already set to ride for the team next season, having penned a two-year deal when he stepped up from the Pramac Ducati team, while Miller signed his contract extension earlier this season.

The Australian won back to back at Jerez and Le Mans to get him back into championship contention after a difficult start to the season and his efforts were rewarded with a new multi-year deal.

Since then though the wins have dried up for Miller and two sixth-places have been separated by a third-place finish in Barcelona.

Bagnaia has been scoring more consistently than his team-mate but is yet to take to the top step in Ducati colours. Back-to-back runner-up finishes at Portimao and Jerez is the best he’s managed so far this season.

Ducati will provide bikes for one-third of the MotoGP grid next season, with VR46 and Gresini Racing both opting to take machines from the Italian manufacturer. 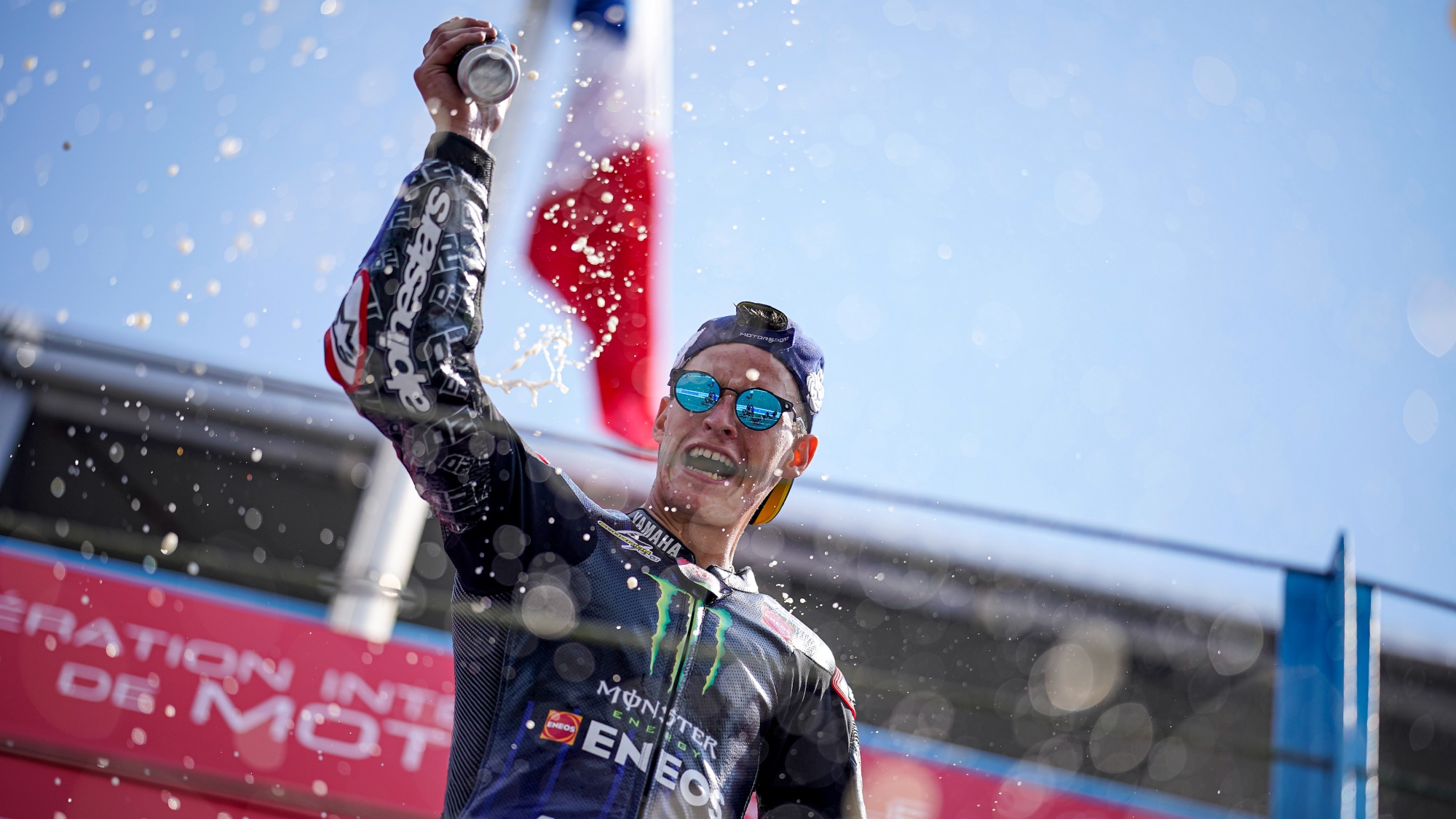 Quartararo leads the championship heading into the summer break but who will line up next to him in 2022?

On one side of the Yamaha garage, the team has complete harmony as Fabio Quartararo has bounced back from his arm-pump issues at Jerez to lead the world championship heading into the five-week summer break.

On the other, turmoil as Maverick Viñales has finally got the split he wanted and the team now has to rethink its 2022 plans. A toxic atmosphere has festered as the Spaniard couldn’t recapture his flying start from 2018 with the team and there was surprise when he re-signed with the team for a further two years last season.

His apathy to Yamaha’s one-two finish at Assen preceded the announcement both parties would split at the end of 2021 and there are a few interesting options on the table.

Franco Morbidelli is the obvious choice to fill the space next to Quartararo as the Italian performs wonders on outdated Yamaha machinery but might options elsewhere lead him out from Yamaha’s grasp? 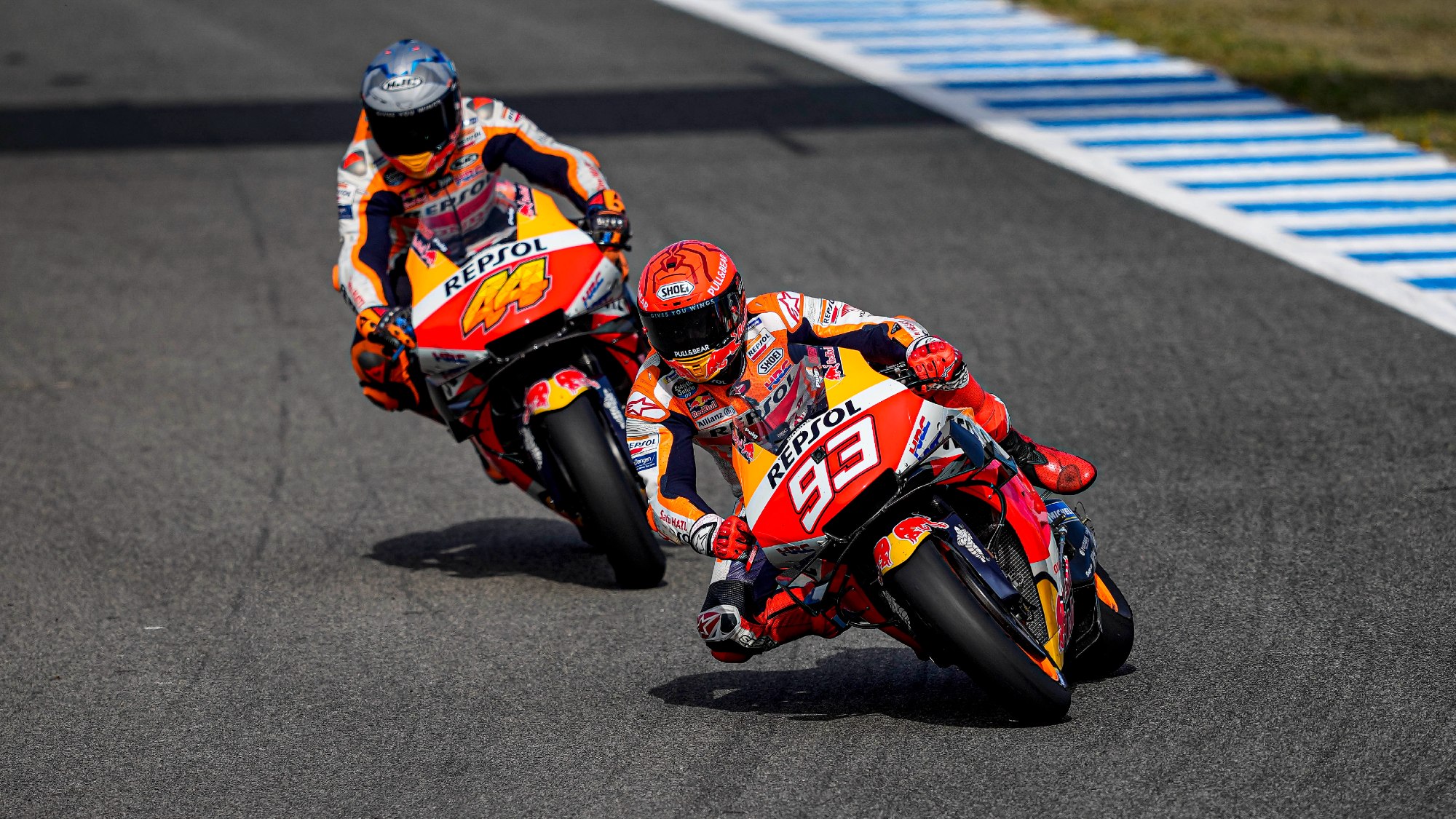 Márquez and Espargaró will be staying with Honda for 2022

Honda’s factory line-up will be staying the same for 2022 with Marc Márquez partnering Pol Espargaró for another season.

The six-time MotoGP champion has endured a long road of recovery since breaking his arm in Jerez back in 2020, but victory at the Sachsenring was a cathartic moment for team and rider.

Márquez has been hot and cold as he continues to return to full strength but Espargaró still lags behind his team-mate despite the two-race advantage he has over him.

He hasn’t had an easy time adapting to the RC213V, and two eighth-place finishes are the best he has to show so far this season.

Despite a heavy crash during practice, Márquez put in a typically strong performance to finish seventh at Assen, a performance which team boss Alberto Puig says revealed the old-Márquez. 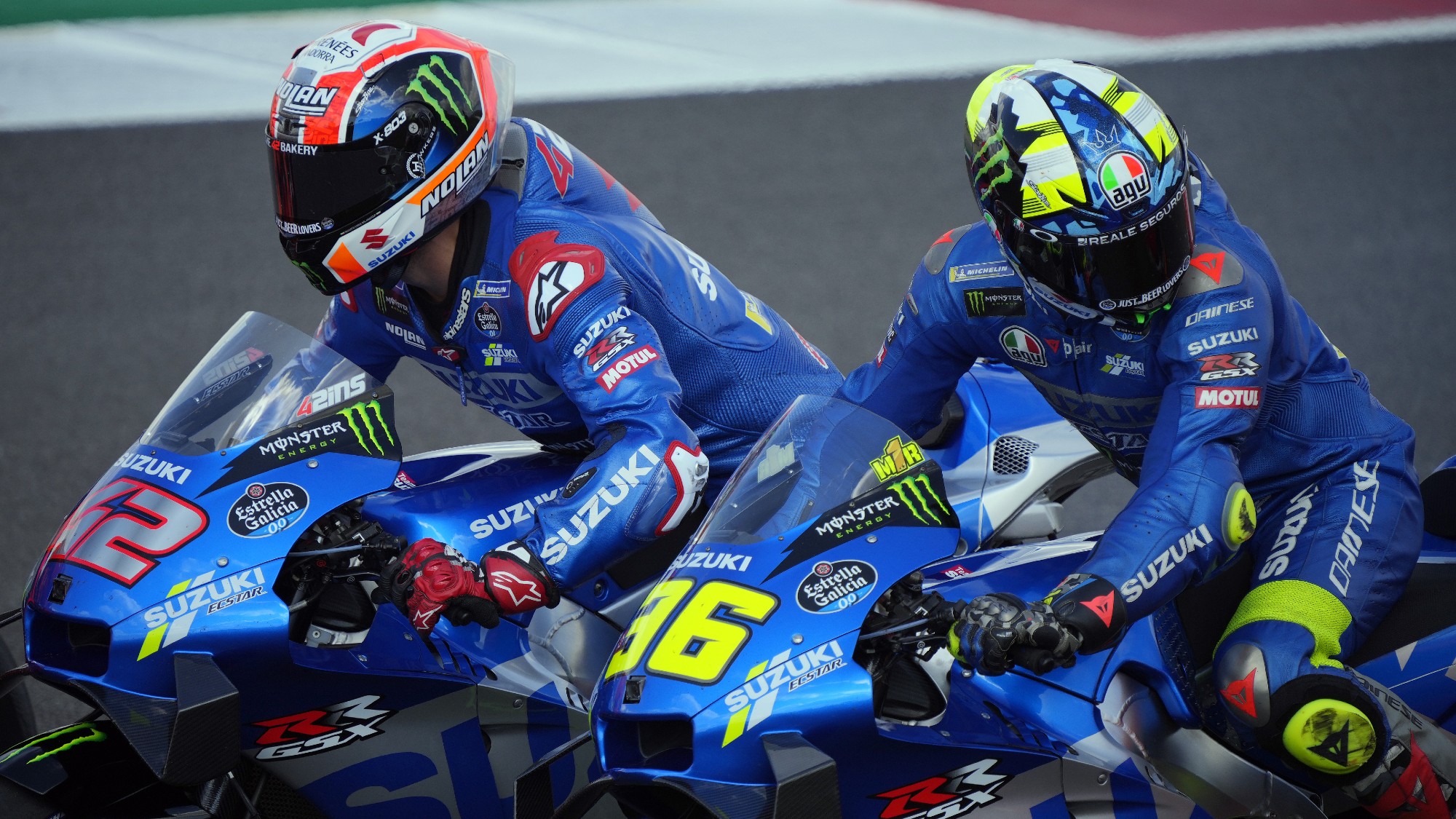 It hasn’t been the title defence Joan Mir would have dreamt up during pre-season as Suzuki’s struggles have limited him to three third-place finishes so far this season.

Things aren’t much better on the other side of the garage either as Álex Rins has had three DNFs and a non-start due to his crash at Mugello.

The team looks to have lost its advantage over the field from last season when it could operate the Michelin tyres and keep them in the ideal performance window over the course of a race distance.

Not only that but the team is the only factory outfit to not have a shapeshifter on its bike, costing valuable time over the course of a qualifying lap and race. 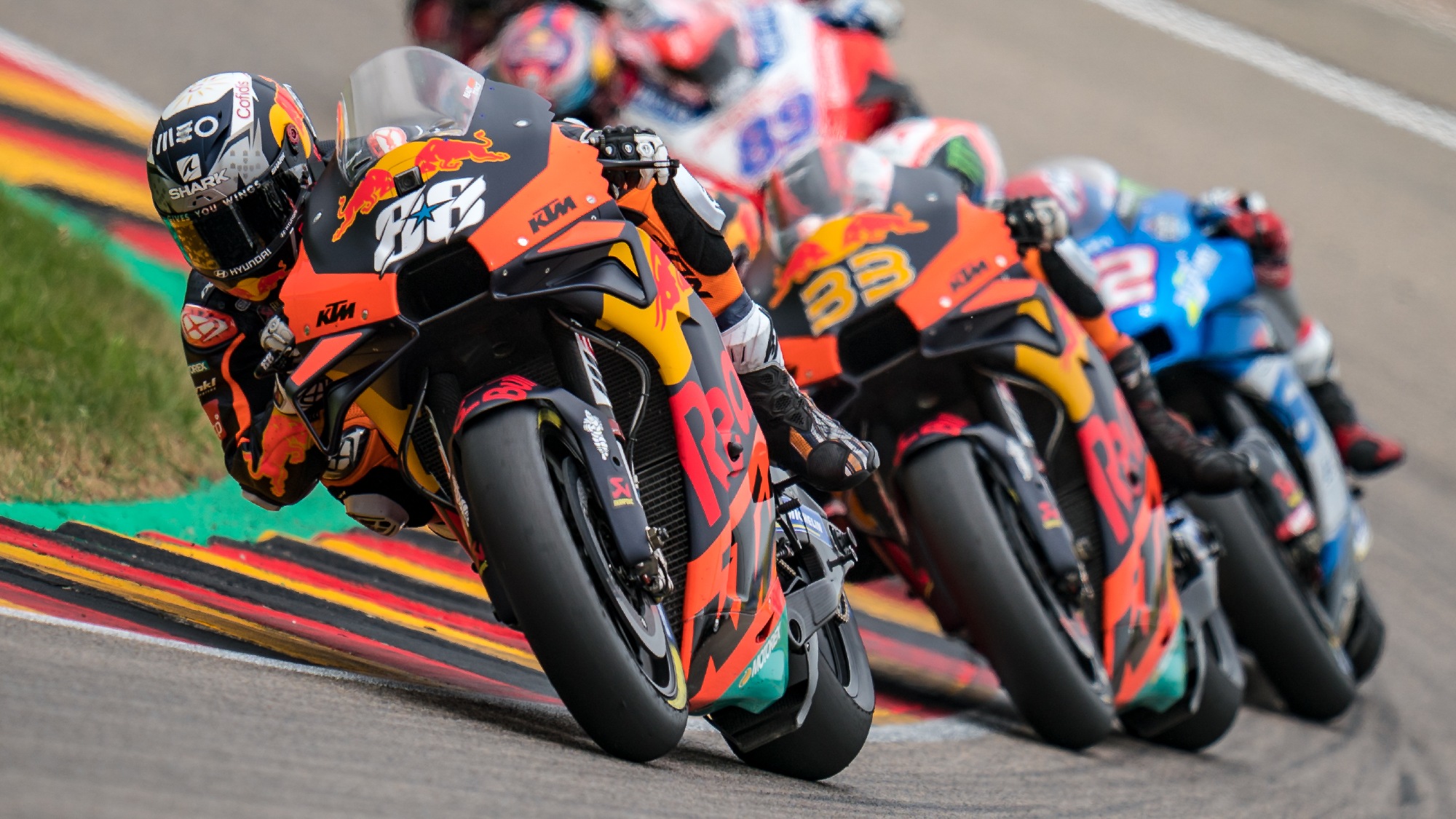 KTM has its rider line-up sorted for next season with both Miguel Oliveira and Brad Binder remaining at the factory team.

Oliveira has taken KTM’s only win of the season so far, winning in Barcelona well ahead of team-mate Binder.

The South African announced in June that he’d re-signed with the team and extended his deal for another three years, taking him up to the end of the 2024 season. 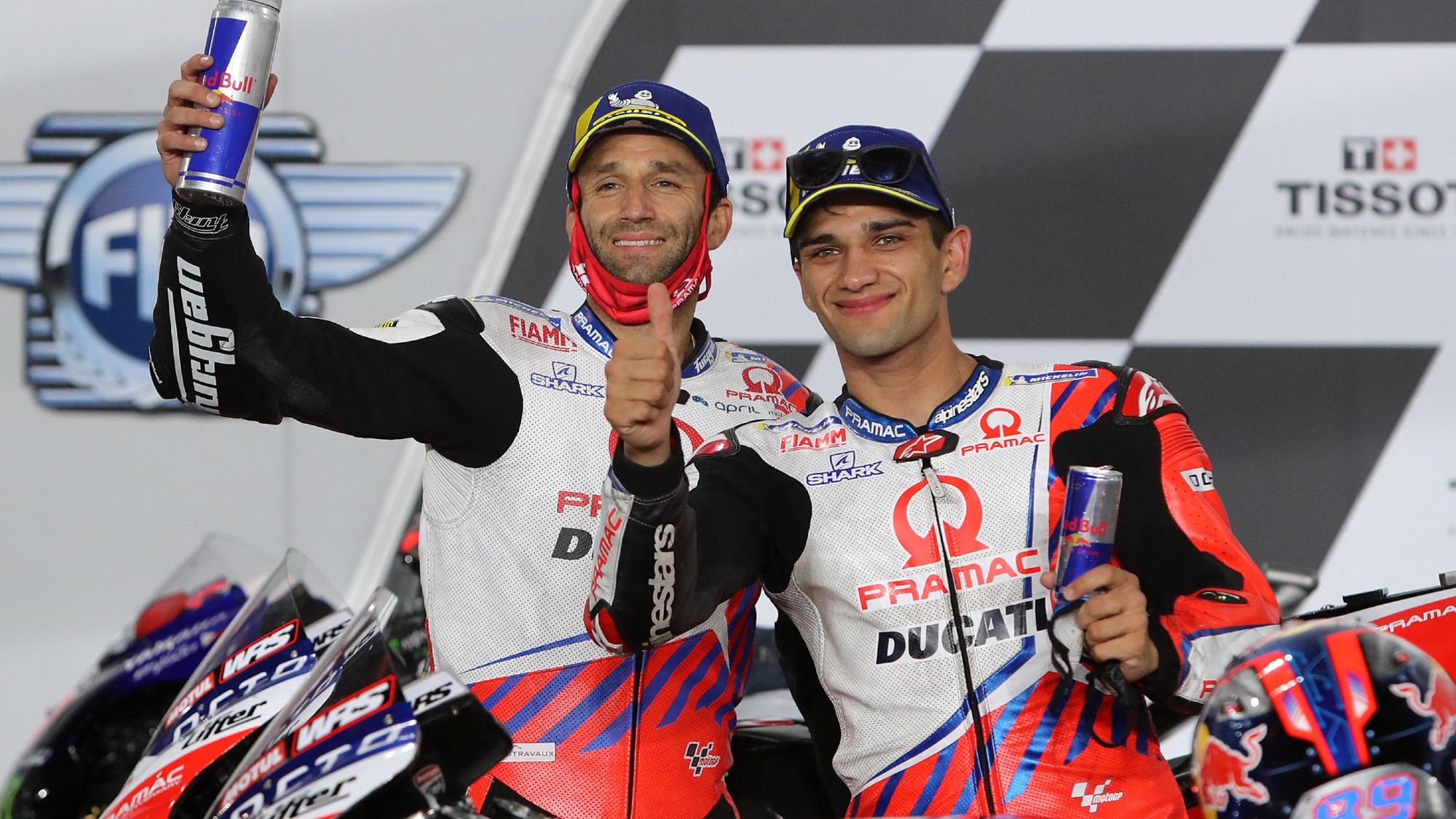 Pramac continues to combine youth and experience with Martin and Zarco

It has been a career year for Johann Zarco as the Frenchman has put together a championship-contending season.

He’s made great use of his current-spec Desmosedici to score four runner-up finishes in 2021 and heading into the summer break is Fabio Quartararo’s closest challenger for the world championship.

Rookie team-mate Jorge Martin started strongly as well, finishing on the podium behind team-mate Zarco in Qatar but a crash in Portugal the following race put him on the sidelines for four races.

Both riders will be racing at the Pramac team next season with the team announcing earlier this year it had extended the contracts of both its current riders for 2022. 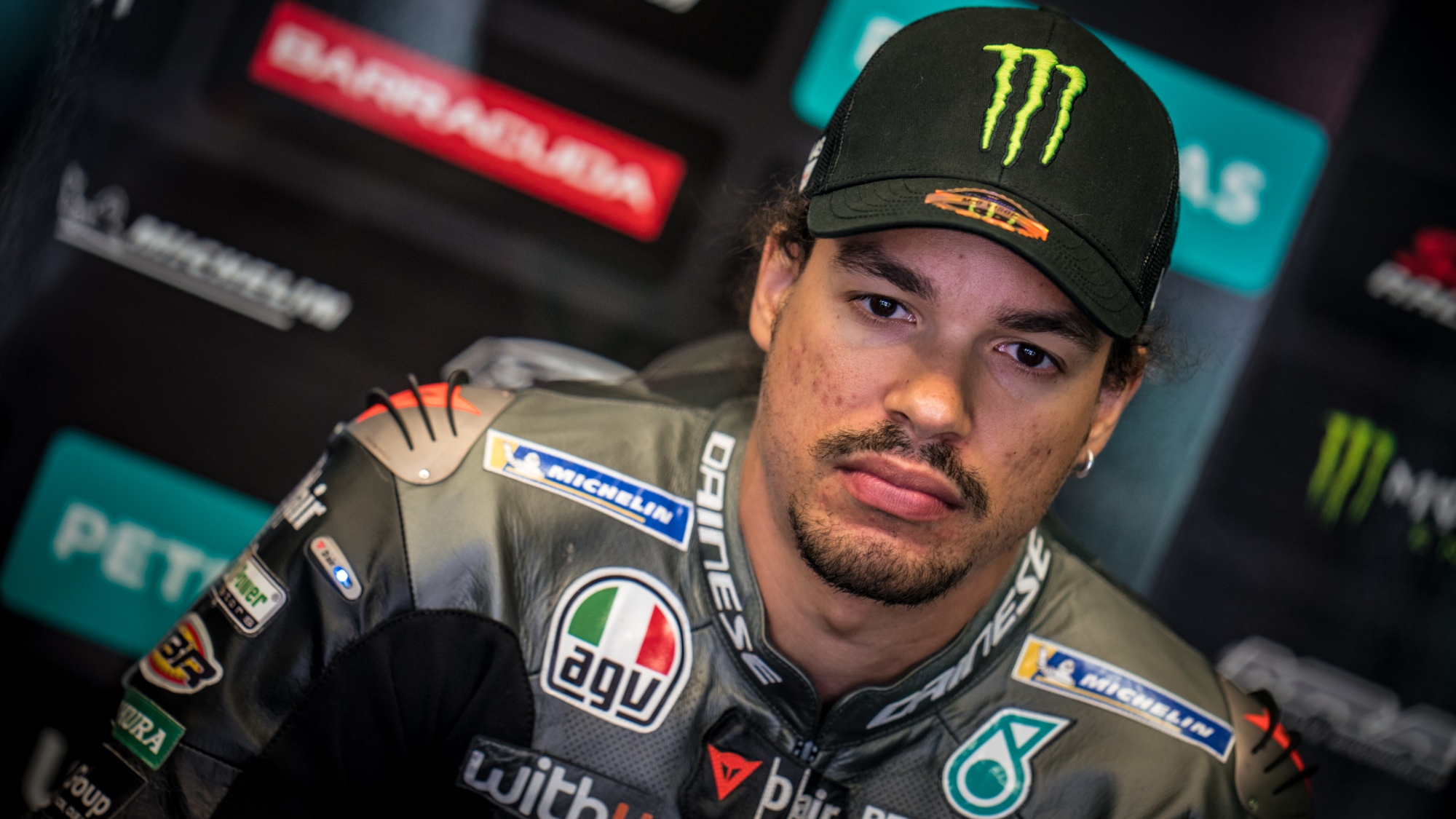 As things stand, Franco Morbidelli will line up on the 2022 grid for Petronas Yamaha SRT but that could all change now Maverick Viñales is on the move.

Morbidelli has made it well known he is unimpressed riding outdated machinery so a gap opening up at the factory team seems to solve that problem unless Yamaha chooses another option.

One rider that is no longer in the frame is Toprak Razgatlıoğlu. The Turkish World Superbike rider was linked with a switch to MotoGP but the 24-year-old signed a two-year deal with Yamaha Motor Europe to lead the team’s WorldSBK efforts.

Likewise, Garrett Gerloff, who deputised for Valentino Rossi and Franco Morbidelli at races in 2020 and 2021 respectively due to positive Covid-19 tests but won’t be an option for the team next season.

He has re-signed with Yamaha Motor Europe for the 2022 WorldSBK season, ruling him out of a potential Petronas SRT switch.

Then there’s the elephant in the room, what does Valentino Rossi do?

Will he walk off into the sunset after a legendary career or does he fancy a go on one of his own Ducatis next season? All signs so far point to the Italian calling it a day at the end of 2021 but stranger things have happened. 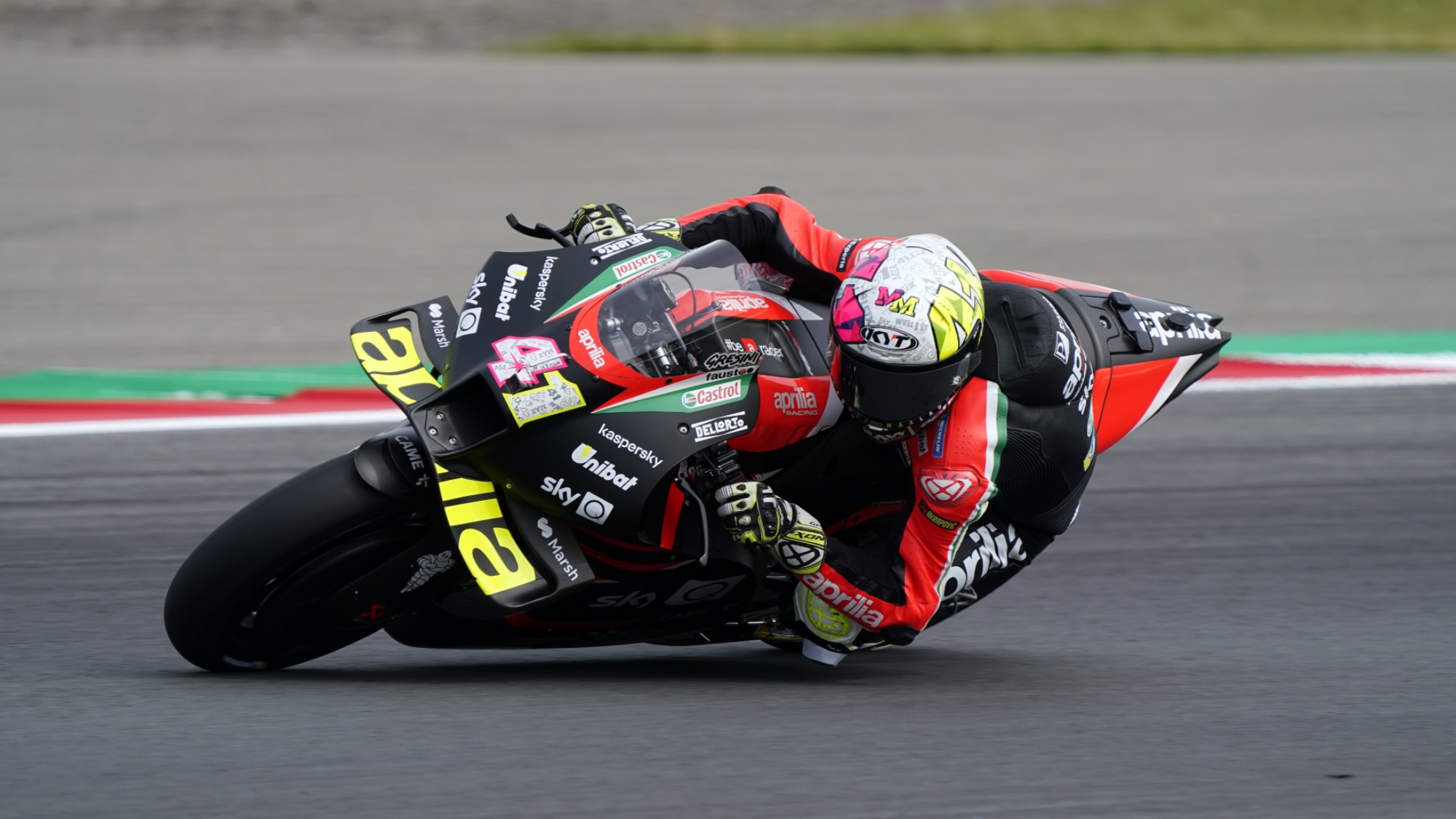 Aleix Espargaró is the only confirmed rider for Aprilia so far

Who will line up alongside Aleix Espargaró next season?

The Spaniard signed a two-year deal back in 2020 so is tied up nicely for next season but the identity of his team-mate is one to keep an eye on.

Andrea Dovizioso signed up for an extensive programme as the team’s test rider for the 2021 season and the Italian was rumoured to have been offered a race seat mid-season.

That hasn’t transpired and now he looks less certain for a MotoGP return with the team following the Maverick Viñales and Yamaha split.

All weekend in Assen, Aprilia made it known it would welcome Viñales with open arms should he work a way out of his Yamaha contract. Less than 24 hours later, their target is free at the end of the ’21 season so surely he is favourite for the ride alongside Espargaró. 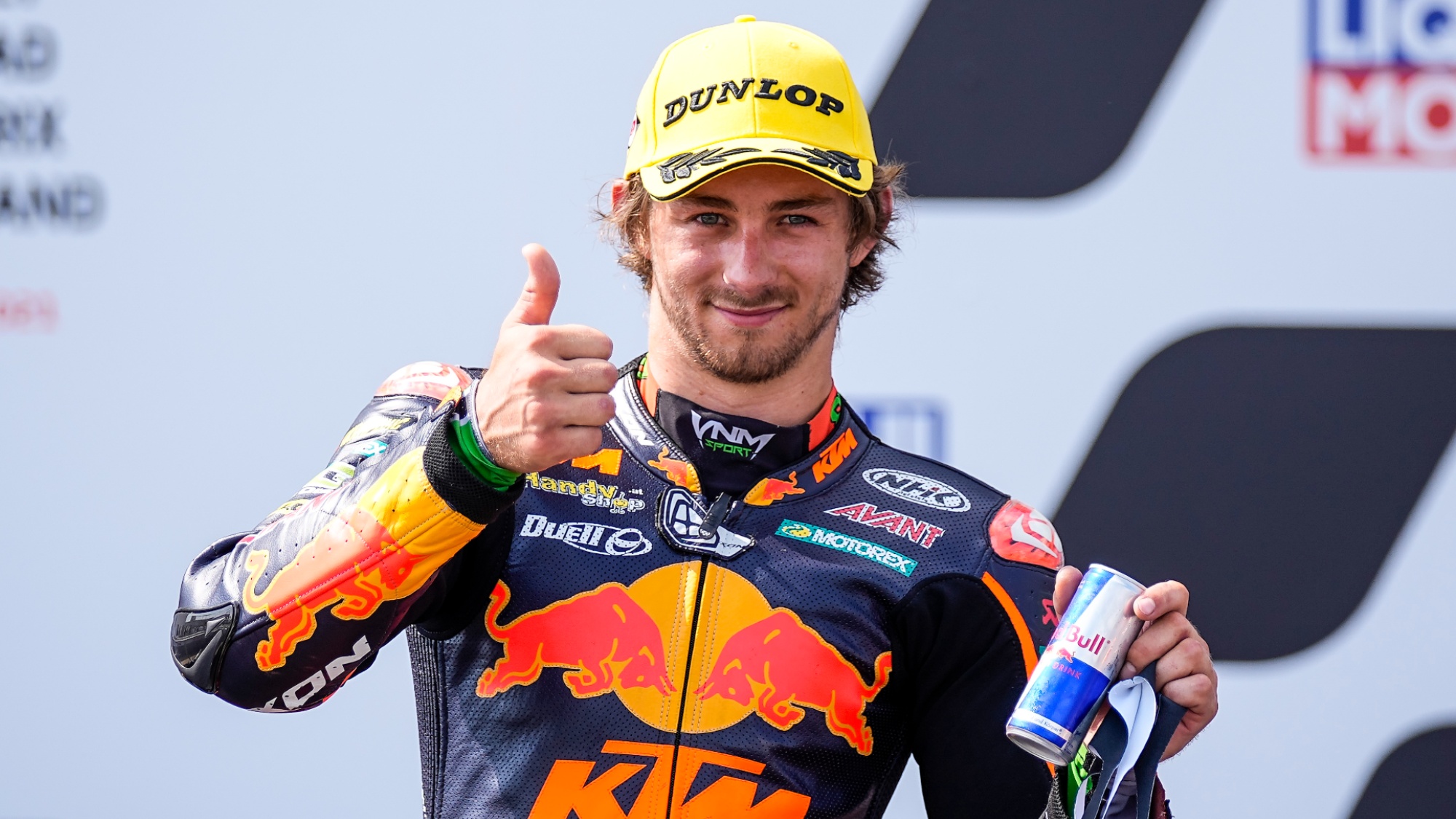 Tech3 has one seat left to fill after it was announced in June that Remy Gardner will be making the step up from Moto2 next season.

The Australian leads the Moto2 rider standings having taken three race wins and finished off the podium just once all season with a fourth-place finish at Jerez.

While there has been no official confirmation over the identity of his team-mate, rumours suggest that it might by Moto2 rival Raúl Fernández that makes the step up to Tech3 to partner Gardner.

Fernández is currently second to his potential team-mate at the summer break with three wins himself. He has also been linked with the Petronas SRT seat of Rossi if the seven-time MotoGP champion decides to call it a day at the end of this year. 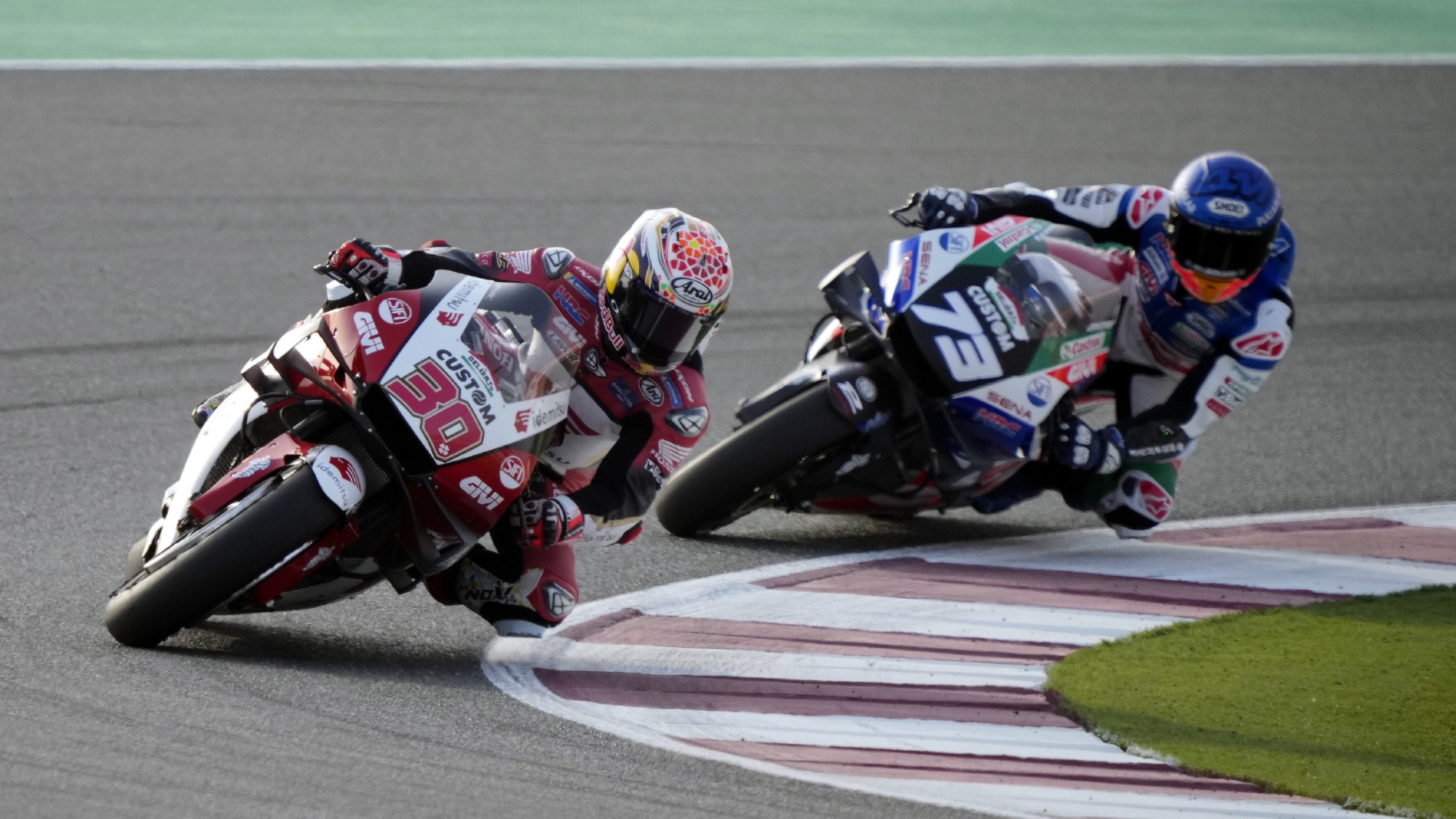 LCR Honda is keeping both Takaaki Nakagami and Alex Márquez for next season. The Japanese rider signed a multi-year deal in 2020 to ride for the team while Márquez extended his contract for a further two years also.

Nakagami has been agonisingly close to a maiden MotoGP podium since joining the team but has so far not managed the feat despite his strong performances.

Márquez hasn’t reached the heights of his Le Mans podium from last season but the younger brother has been putting together a solid if not spectacular season. 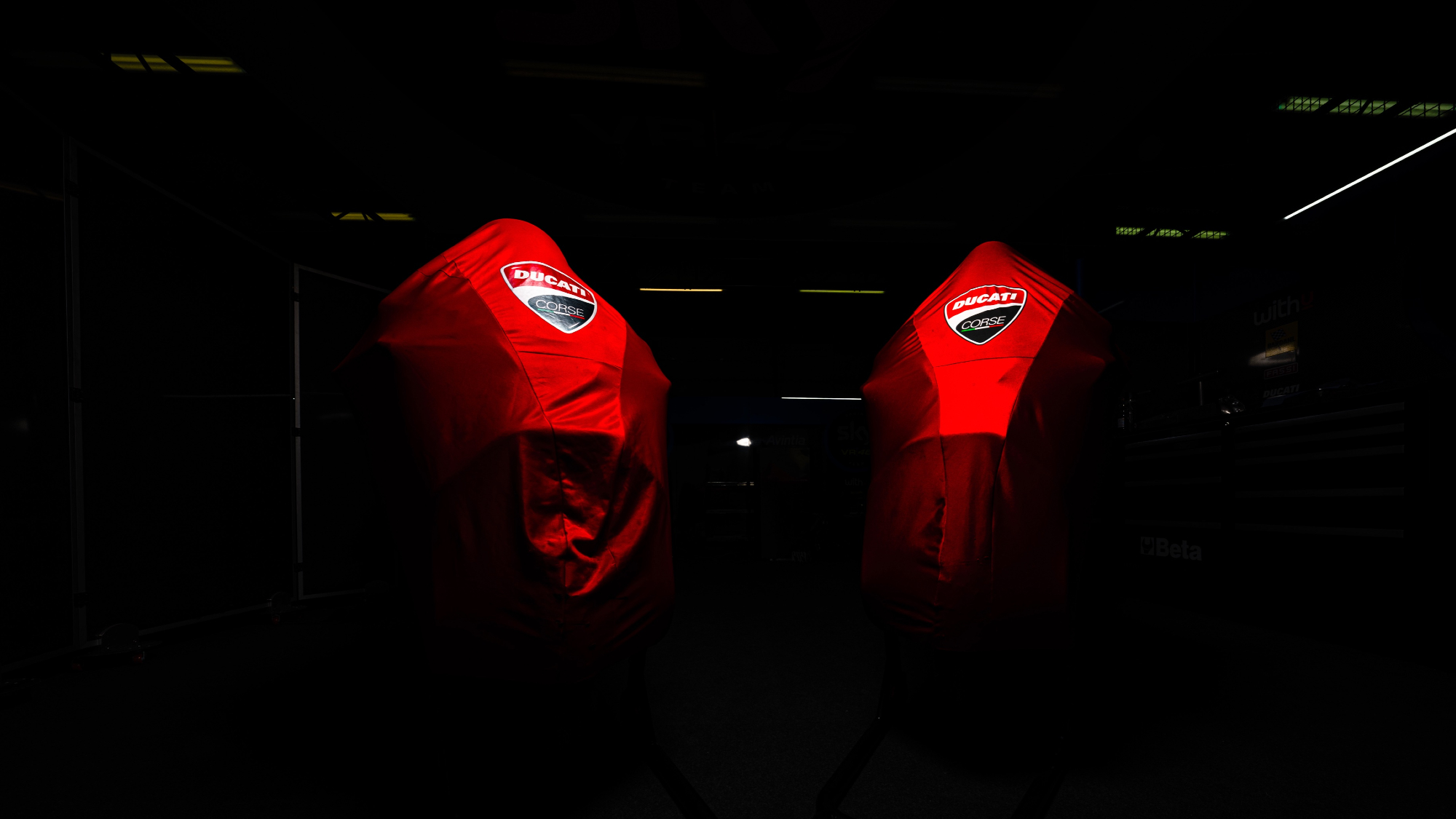 Two more Ducatis available but no riders have been confirmed yet as part of Valentino Rossi’s VR46 Racing team.

Will the man himself make the switch over from Petronas SRT or will he have a rider or two in mind already?

A decision on Rossi’s future is expected during the summer break so we might not need to wait much longer to find out what The Doctor has planned for 2022.

With Ducati making up one-third of the 2022 grid and the Italian marque’s form this season, there will surely be no shortage of willing hands to pilot the VR46 Racing bikes. 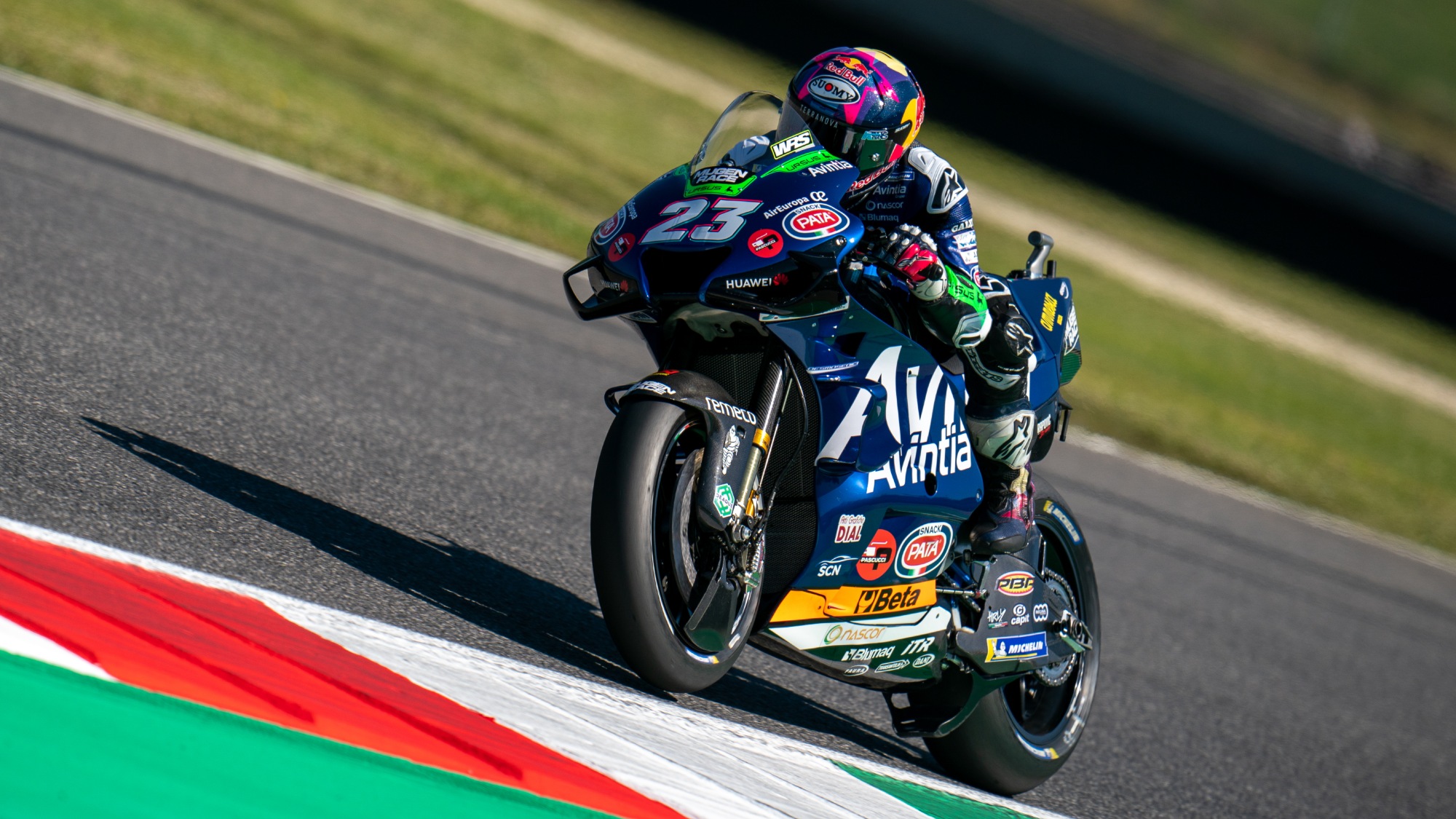 Fabio Di Giannantonio and Enea Bastianini will lead the line for Gresini Racing next year when the team splits from Avintia for 2022.

Bastianini will move across when Gresini becomes its own MotoGP team while Di Giannantonio will make the step up from Moto2 after the end of this season.

Despite the passing of the eponymous owner Fausto Gresini back in February, Gresini Racing will continue on with its plans to become a Ducati satellite team and has already secured Flex-Box as a title sponsor.

It means that Gresini will be operating at every possible level of competition with teams in MotoGP, Moto2, Moto3 and MotoE.