These are all technologies introduced over the decades in grand prix racing by one factory or another and quickly copied by rivals because they gave such a vital advantage.

As you surely know by now that the rear holeshot device and shapeshifter do the same job: they both squat the rear of the motorcycle to lower its centre of mass, which reduces wheelies, so the rider can open the throttle harder and therefore accelerate faster. The holeshot device is used at the start, the shapeshifter when exiting corners followed by longish straights.

Now all the factories have rear holeshot devices/shapeshifters except Suzuki and it’s costing the world champions very dear.

GSX-RR riders Joan Mir and Álex Rins were the stars of 2020 but so far this year Rins has yet to see the podium and Mir has yet to climb higher than the bottom step. Mir currently stands fifth overall, 55 points behind championship leader Fabio Quartararo. That’s not an insurmountable gap, so long as Mir gets a shapeshifter very soon.

“We must work to have the device as soon as possible, so we can start the race with the same tools as the other riders,” said Mir after fighting through from tenth to third at Assen.

At Losail the race winner improved by 12.9 seconds, Suzuki by 11.2, so Suzuki lost 1.7 seconds there. At Jerez the race winner was 3.1 seconds faster, Suzuki only 0.4 faster, so 2.7 seconds was lost there. It was the same story at Mugello and Barcelona, where Suzuki lost 2.5 and 4.5 seconds to the winner. On average, Suzuki lost 2.3 seconds over race distance at those tracks, a significant difference when MotoGP is so crazy close. 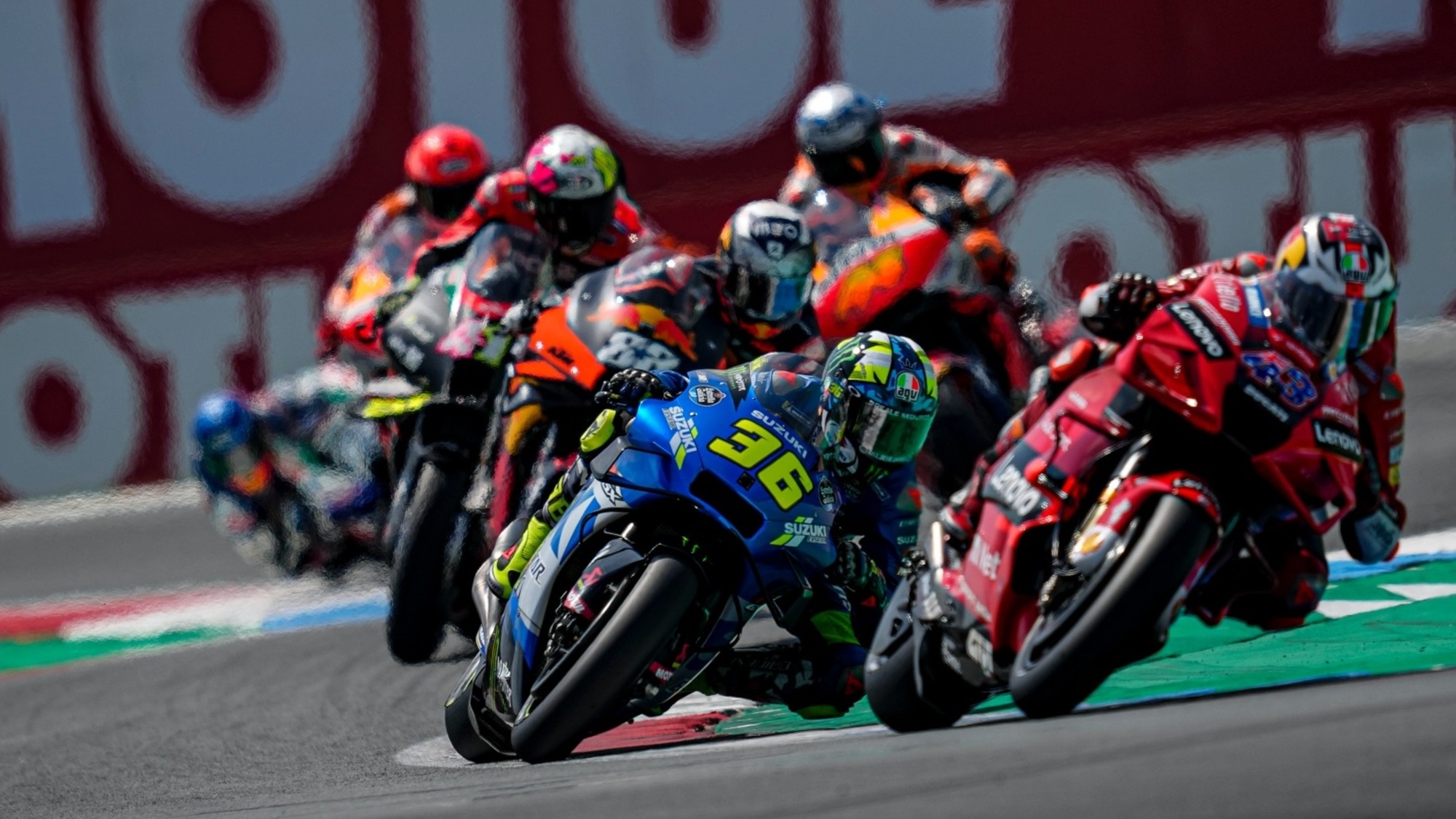 Of course, all the factories have improved their bikes in other ways, but Suzuki knows very well that a rear-shock device would make a vital difference to the performance of Mir and Rins at three different stages of each weekend.

First, it will gain them a few tenths on a fast lap in qualifying, which can be one or two rows on the grid, a huge improvement considering that Mir has yet to qualify on the front two rows this season. So far he’s had three third-row starts, four fourth rows, one fifth row and one sixth row.

Compare that to Quartararo, who’s had eight front rows and one second row, and who fully understands the importance of never qualifying outside the top six, because with an inline-four that’s slower than the V4s you can’t afford to get stuck in the pack.

Fabio Quartararo won his fourth race of the year on Sunday to increase his championship lead, but what about the Ducatis and all the fast tracks coming up?

“We concentrate on qualifying because if we make a bad qualifying it’s impossible for us,” said Quartararo at Assen.

Second, a holeshot device will gain Suzuki a couple of tenths on the getaway from the grid and the charge into turn one.

But how important can the first few seconds of a 40-minute race be? It’s hugely important because where your position at the first corner has a massive effect on what happens over the next 25 laps.

If you’re in the lead group from the start you can maintain your pace through the race and manage the tyres better, because when you’re fighting to pass a bunch of rivals you’re more aggressive on the throttle, so you spin the rear tyre more than you’d like, and you’re more aggressive on the brakes, so you overheat the front tyre. And even if you do make it through the pack and start fighting with the lead group you’ll be in trouble, because your tyres are in a bigger mess than theirs, so you’ve used up all your ammunition.

Suzuki has been working on its own shapeshifter for a while and there’s a chance the GSX-RR may be armed with the device when MotoGP returns from its holidays at Red Bull Ring in August. 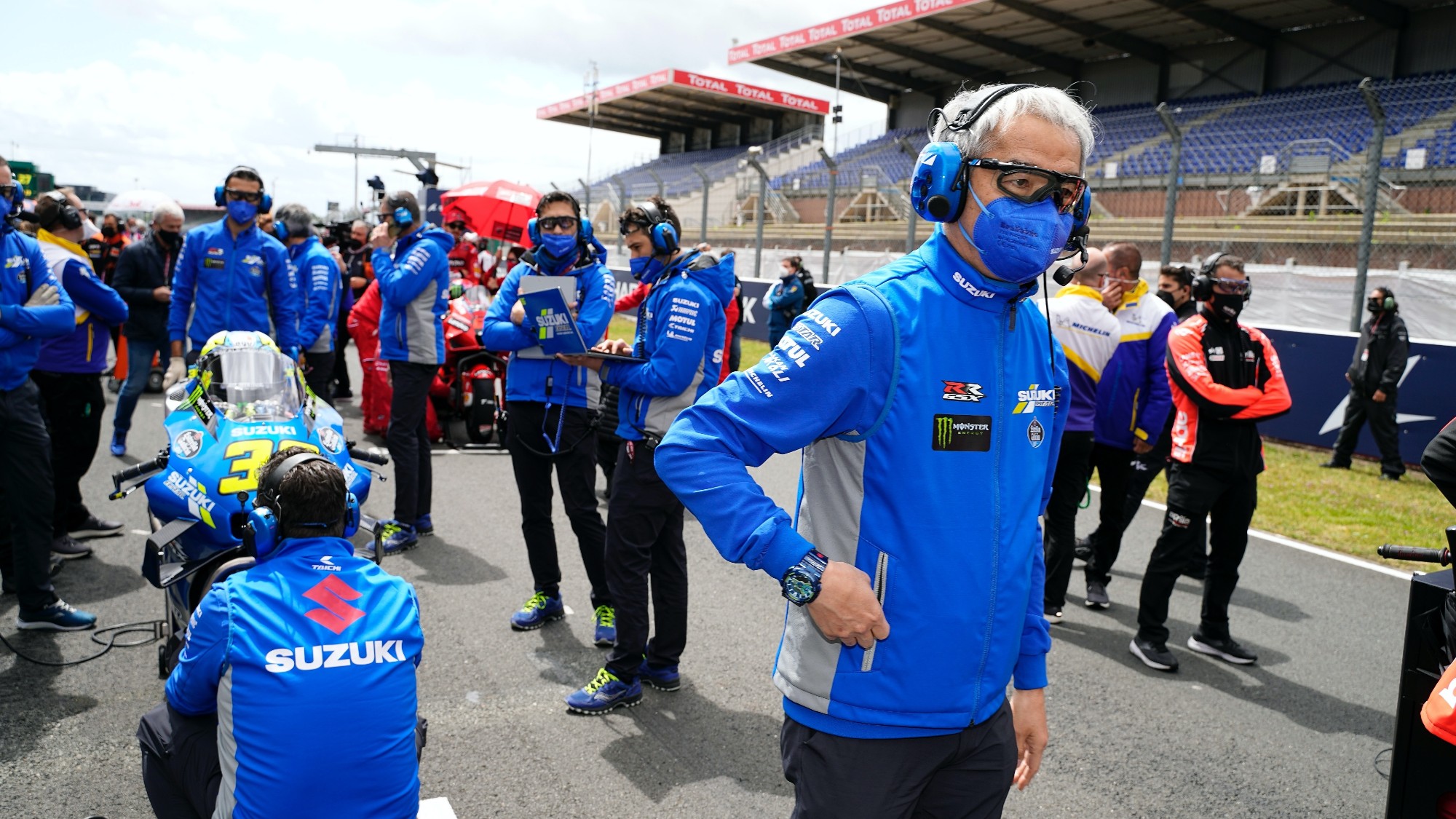 Shinichi Sahara at Le Mans, where Mir and Rins qualified 14th and 15th

“I hope so – I’m waiting for an early Christmas from Santa Claus!” says Shinichi Sahara, Suzuki’s MotoGP project leader and team director. “Even without this device we can manage to make good lap times but not having the device makes it difficult for us to overtake, so it’s a small detail but it has a big effect. Its importance is different track by track, depending on the layout.”

“Right now we are only testing in Japan,” he adds.

Shapeshifters are very complex pieces of kit. Electronically adjustable suspension is banned in MotoGP, so everything must be done mechanically and hydraulically. The rider turns a switch on the triple clamp, which hydraulically activates a secondary hydraulic unit near the shock, which somehow bleeds the shock and compresses the spring, by more than half its stroke. This requires lots of pressure, perhaps 100 bar. So how is this pressure obtained? Presumably by a pump, but what drives that pump? The engine? What else, if electronics aren’t allowed?

“There are many challenges with this technology,” says Sahara. “Of course, reliability because of all the hydraulic controls. We have seen some other manufacturers have problems with their systems working incorrectly, which shows that you can throw away a whole race. And this is also important for safety.”

Mir’s frustration at the delay has been obvious at recent races, where he’s had to fight his way through the pack while the leaders disappear out front. He’s scored three podiums so far – 4.9 seconds behind the winner at Portimao, three seconds back at Mugello and 5.7 back at Assen – so it’s easy to see how the lack of the device is damaging his title defence.

Of course, Suzuki’s issues aren’t only related to this gadget.

When the factory switched from V4 power to inline-four power in 2015 its number-one priority was to create a very balanced motorcycle, which allows riders to be fast in all conditions and looks after its tyres well. 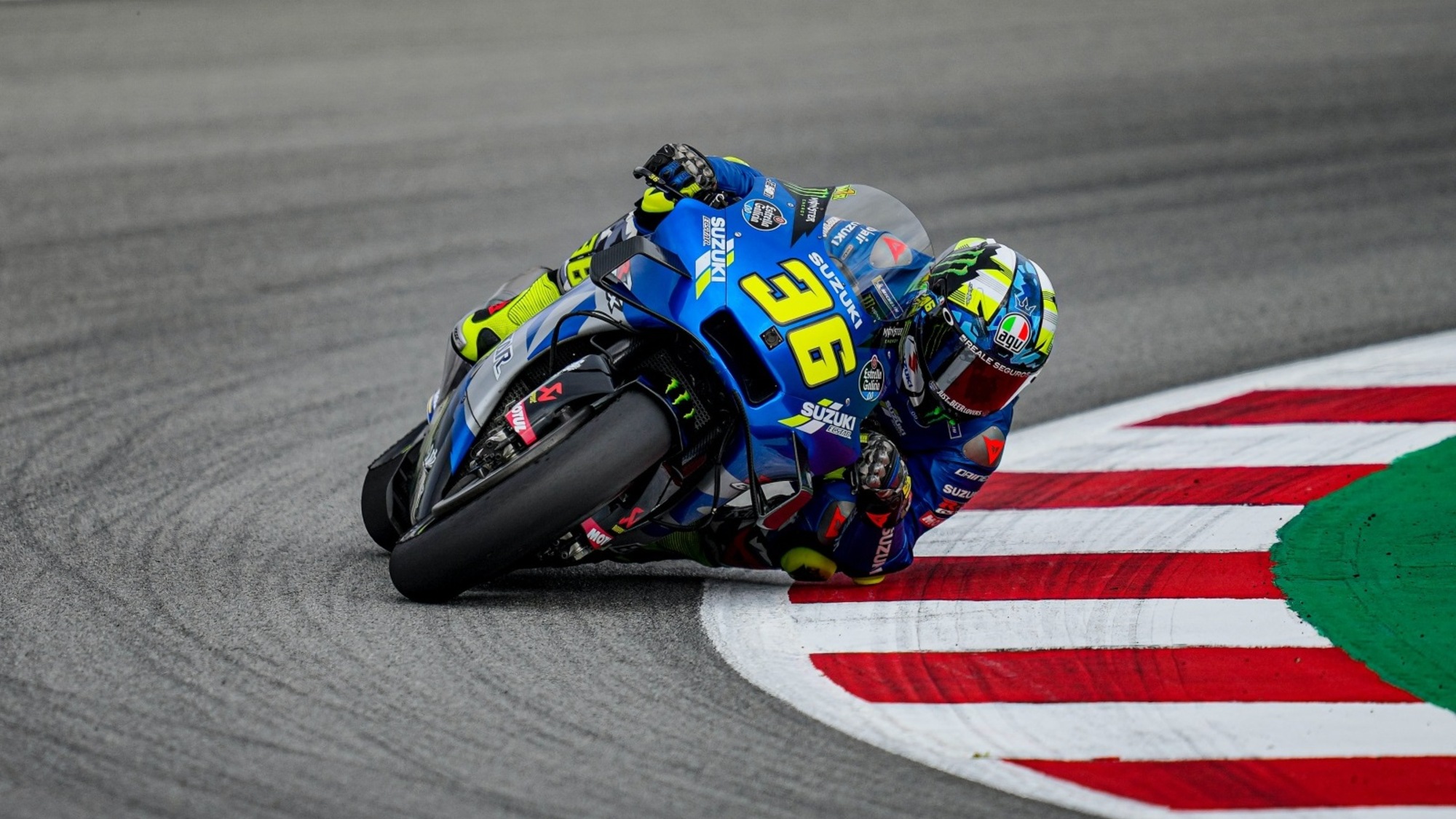 The GSX-RR does indeed conserve its tyres well, but in recent years it’s become obvious that a bike that wraps its tyres in cotton wool for 25 laps isn’t so good at taking out the maximum from its tyres over one or two laps in qualifying.

“Our priority is always the race,” says Sahara. “But sometimes a bad grid position makes race management and tyre management quite difficult. We already have some ideas to improve qualifying and sometimes they work, like at Sachsenring, where Álex would’ve been second row at least, if there hadn’t been yellow flags.”

Rins usually qualifies better than Mir, but so far this year his races have been a disaster, with three crashes and only two top-ten finishes.

“Overall I’m not quite happy with our results but also it’s frustrating because the results sheet doesn’t reflect our real performance,” Sahara continues. “For sure our competitors have improved a lot from last year. We have also improved but maybe our step has been smaller than other manufacturers.

The mystery of the Michelins continues to play a major part in who wins and who loses in MotoGP.

“It’s the same situation for everyone, so we have to overcome this situation,” Sahara explains. “But it’s not easy to control, because sometimes Michelin’s hard tyre isn’t really hard and the medium tyre has more durability than the hard.

“But I believe the system we have used for tyre management in the last few years works quite well – this is why we had good consistency last year with both Joan and Alex and this is one of the reasons we could achieve the championship.

Mir and Rins are on holiday right now, but you can be sure they’ll be busy checking their emails, waiting for good news from Hamamatsu.