Who will be Marc Márquez’s team-mate at Honda for the 2020 MotoGP season: Crutchlow? Zarco? Nakagami? No, it will be Márquez! 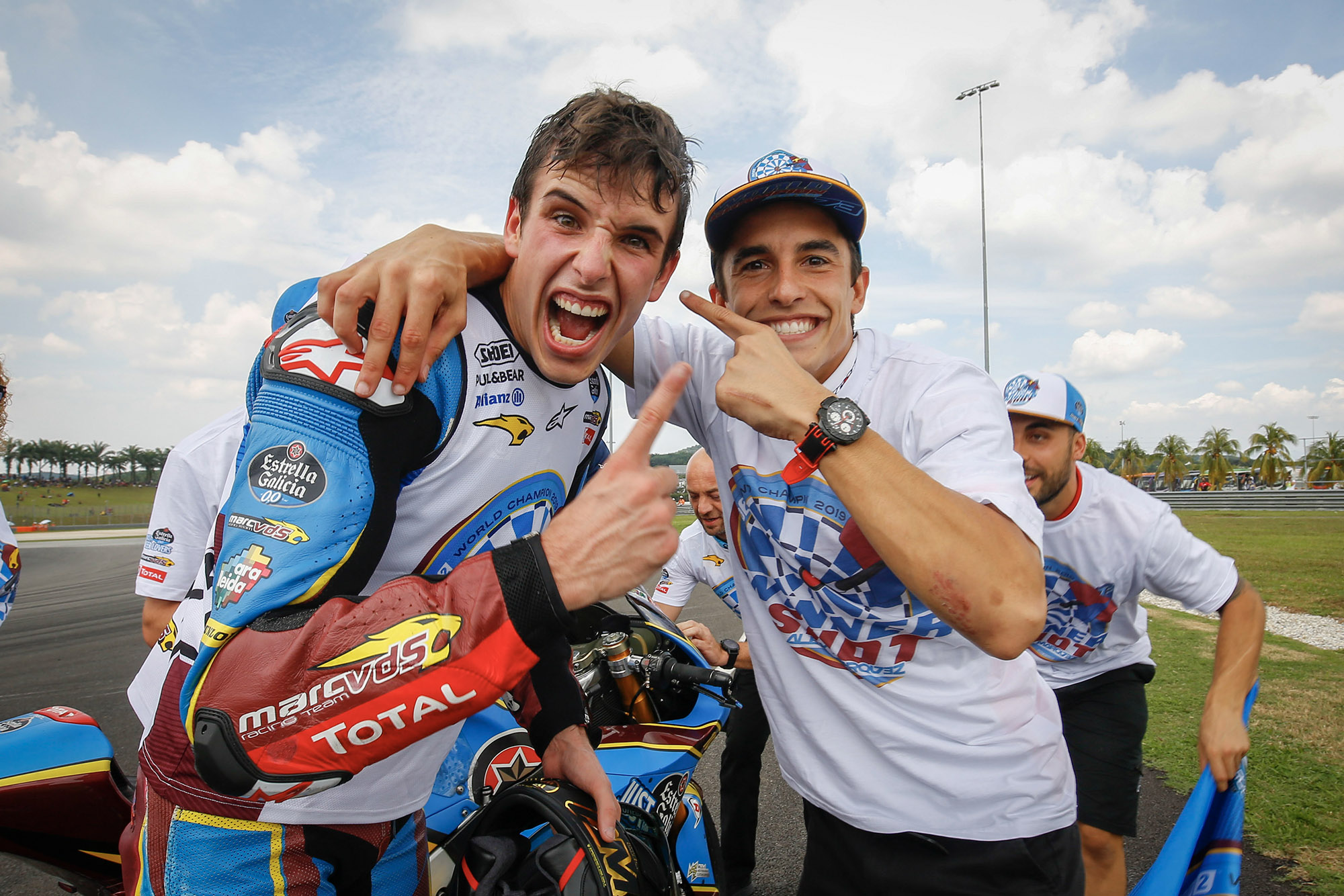 Valencia was a weird weekend, all the way from Jorge Lorenzo’s Thursday bombshell to Sunday’s traditional and apocalyptic post-last-race-of-the-season fireworks.

Most journalists turned up at Valencia hoping for a quiet weekend: all three world championships already won, not too much work and a few end-of-term parties.

And then Lorenzo went and spoiled it. His decision to head to the beach in 2020 instead of to the racetrack transformed the media centre into a hubbub of rumour and counter-rumour. The five-times champ’s decision to retire wasn’t the story; the story was who would replace him at Repsol Honda.

Groups of journalists stood huddled in the media centre sharing the revelations of their latest chats with the paddock’s movers and shakers. Then they returned to their keyboards which they attacked with clattering ferocity, until their latest scoop was overtaken by facts and the process started all over again.

Paddock rumours spread like wildfires and this time the flames spread beyond Repsol Honda. Zarco would ride a Ducati for Avintia. Oh no he wouldn’t. Jack Miller would replace Danilo Petrucci in the factory Ducati team, while Zarco would replace Miller at Pramac and Petrucci would be cast into the wilderness. Oh no he wouldn’t. Not for the moment, anyway…

The fires spread and tempers flared. There was talk of shouting matches between MotoGP bigwigs, team managers, rider managers and event promoters, all fighting their corners. At one point it seemed like the media centre could spontaneously combust in all the excitement.

On Sunday night I dreamt that Alex Márquez was confirmed as Marc’s 2020 team-mate. The highlight of the announcement was Dire Strait’s motorcycle-mad Mark Knopfler arriving in the Valencia paddock by helicopter to animate the media conference with an acoustic solo of Brothers in Arms.

Finally, on Monday evening, Repsol Honda did confirm that Márquez the younger is Lorenzo’s replacement. 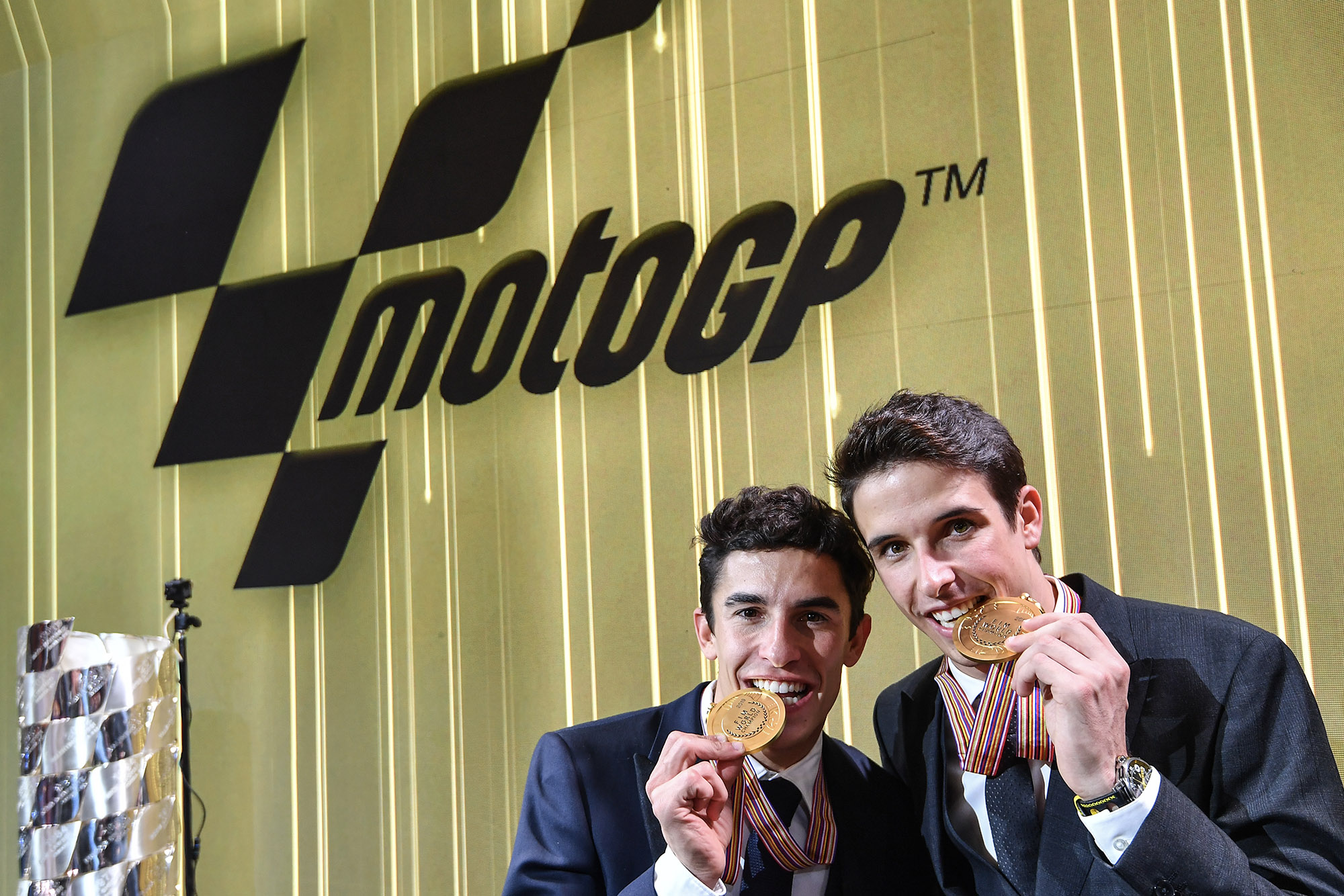 Márquez & Márquez: neither a stranger to victory

Despite all the weekend chitter-chatter Alex’s arrival at Honda came as a shock to some, but the 23-year-old former Moto3 champ merely follows every other Moto2 world champion – Toni Elias, Stefan Bradl, Márquez, Pol Espargaro, Zarco, Franco Morbidelli and Pecco Bagnaia – by graduating to MotoGP.

Certainly, Alex isn’t Marc. But who is? MotoGP bikes have never been more evenly matched than they are now, and yet Márquez the elder finished this season 151 points ahead of Ducati’s Andrea Dovizioso and with double the points of Yamaha’s third-placed Maverick Vinales. He scored 12 victories and six second places from 19 races. No one has ever ridden a season like that.

The Márquez brothers have always come as a family pack – they wear the same helmets, the same leathers, the same boots and gloves, they share the same personal sponsors and so on. And now they will ride the same motorcycle. 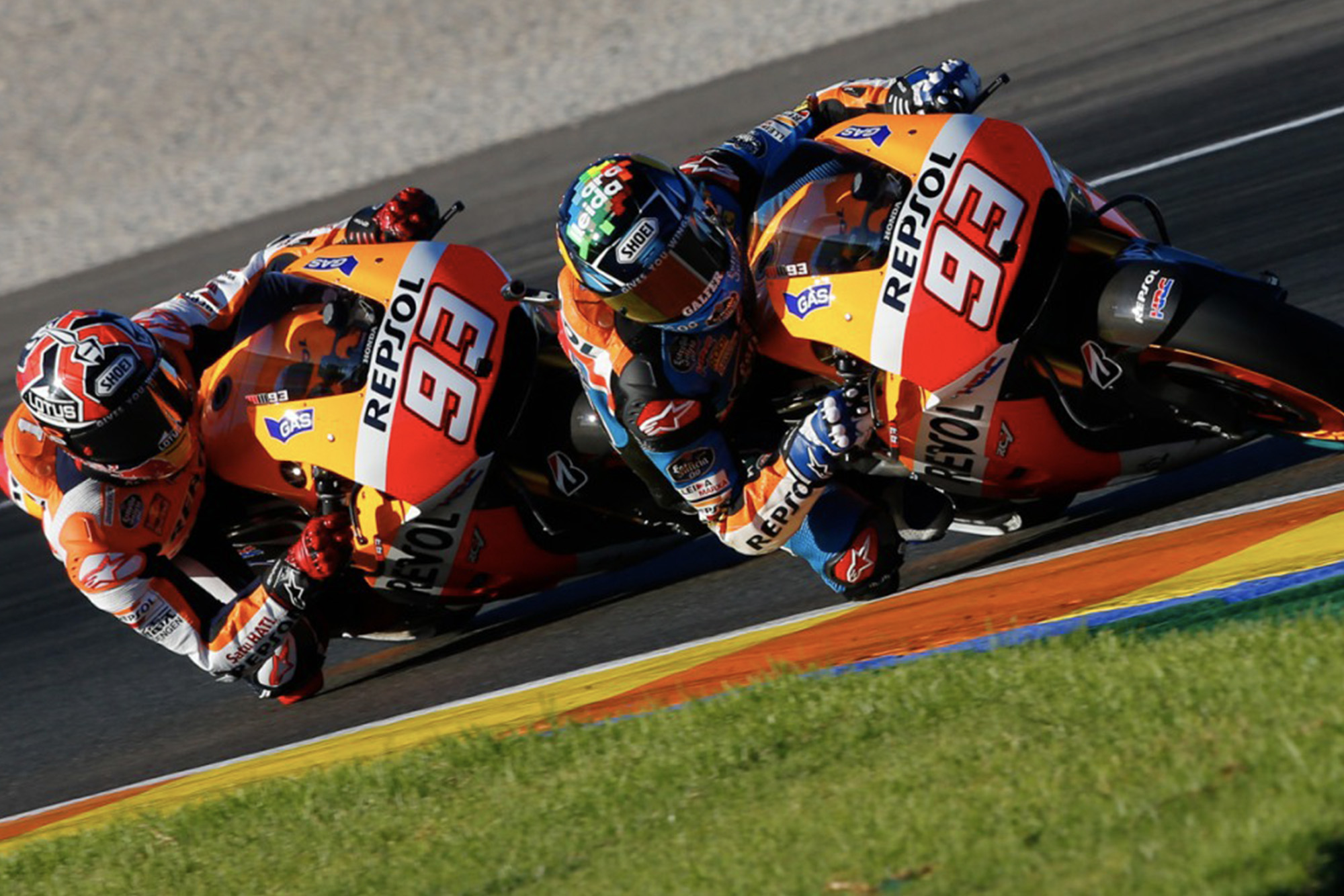 The Márquez/Márquez partnership should be interesting because it’s going to be a 220mph/350km/h human biology experiment, another branch to the nature/nurture debate. The Márquez brothers share the same genes and the same upbringings, but how will they go on the same bike? At least Alex will have the best coach any rider’s had in the history of Grand Prix racing; on call 24/7.

They already train together, all the time. Marc is much faster than Alex on motocross bikes but they are more evenly matched in dirt track. “In dirt track I can push him, if I fit new tyres,” says Alex. 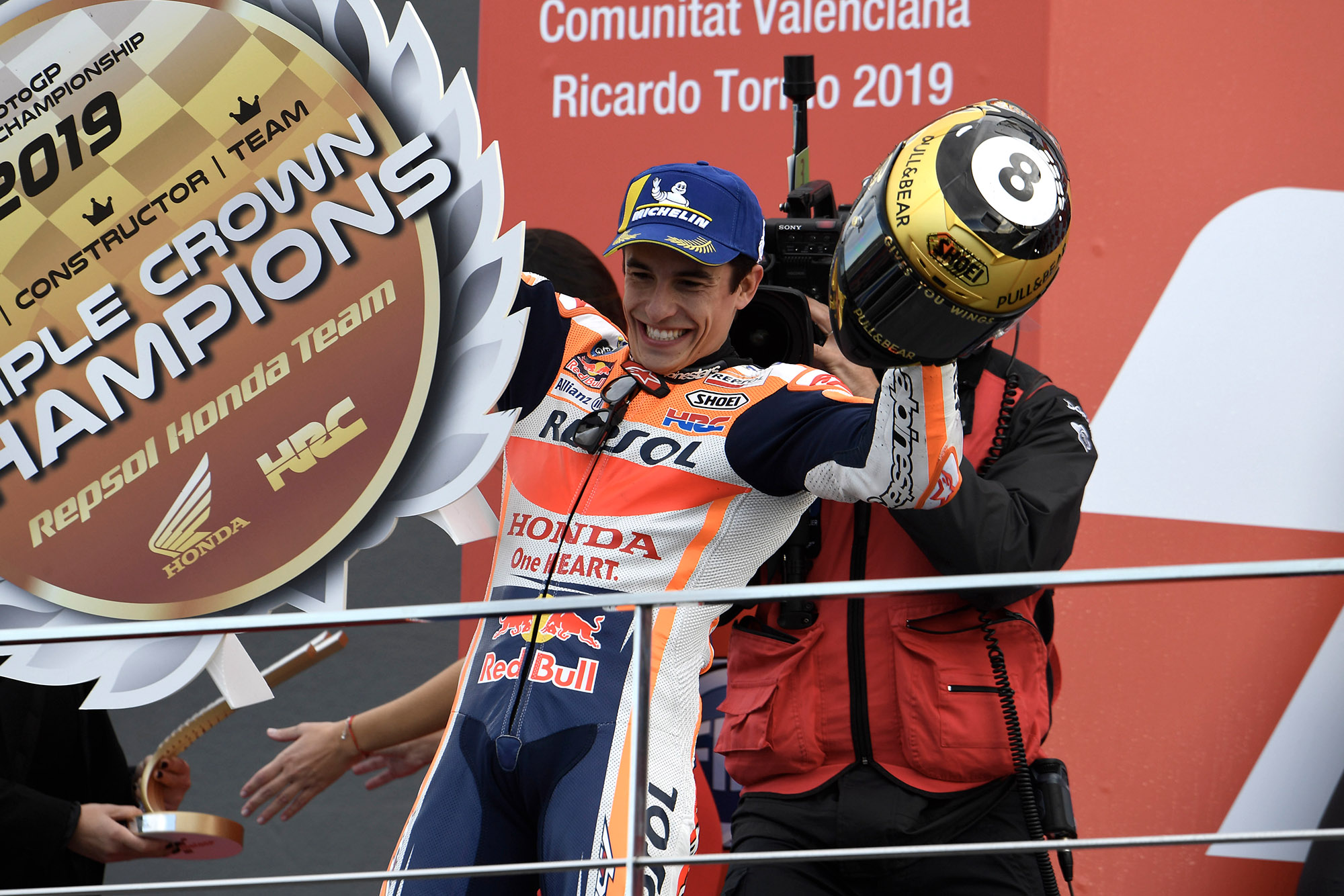 I almost forgot… there was a race on Sunday. It was a kind of devil take the hindmost event – the fastest riders didn’t crash, the slower riders did. This was most likely because the race was run in wintry conditions, with a bitter wind and a track temperature of just 16 degrees. Even at Phillip Island last month the race-day track temperature was 30 degrees.

Therefore keeping heat in your tyres was the big deal. If you didn’t nail the brakes and the throttle until your eyeballs bulged from their sockets then your tyres dropped out of their optimum operating range and you ended up on your backside. It was the old Catch 22 story, already discussed in my post-Australian GP blog.

Turn Six claimed Petrucci, Zarco and Iker Lecuona in quick succession, because it’s the first left-hander after two rights and mostly because the south-westerly wind blew the front wheel from under riders.

“I saw some strange crashes in Moto2, including my brother,” said Márquez after his 56th MotoGP win. “So I went into pit lane to check the wind direction and I immediately understood that the wind was pushing very hard at Turns Six and 11, so I was a bit careful at those corners because it was easy to lose the front.”

Morbidelli was the fastest rider to crash. The Italian was chasing fifth-placed Alex Rins when he fell at the Turn Four right-hander, Valencia’s number-one accident black spot, because the right side of the tyres hasn’t touched the asphalt for 40 seconds.

So why did the 2017 Moto2 champion crash when he was pushing so hard? “The problem was that I had no one in front of me to warm up my front tyre, so the tyre got cold, especially on the right side,” said the Italian. “I felt something the previous two laps, but I kept believing that if I pushed more the tyre would warm up, but it didn’t happen like that.” Other riders spoke of the same issue.

There were six crashes in MotoGP, which was nothing to the 14 accidents in the Moto3 race, which was run in even cooler conditions. There were two mass pile-ups, at two of the anti-clockwise track’s right-handers: Turns Four and 11.

Five riders went down in the Turn 11 melee, including Dennis Foggia who rammed the fallen bike of Carlos Tatay, cartwheeled through the air and hit the ground with a terrible impact. He lay there for a long time, while medics attended to him and marshals made a wall around him. It didn’t look good.

Foggia was lucky to escape with concussion and pain from his head to his toes, just as Miguel Oliveira was lucky to get away with a nasty battering when he was blown off the track during last month’s windswept Australian GP at Phillip Island.

Both these accidents and both these events should tell MotoGP a simple truth: that the calendar must be completely rewritten so that the championship chases the sun. This is as much a safety issue as anything.

If Formula 1 can do it, so can MotoGP. The Formula 1 championship runs from March to December, but the cars only race in Europe between May and September. It’s a no-brainer.

“It’s not a fantastic idea to come to Valencia in the second half of November,” agreed Valentino Rossi. “But the people who organise the championship are from Spain and they have a lot of interest in having the last race in Spain. But it’s better to finish the championship in another place where it’s hotter, not in Europe. The other problem is Phillip Island – it’s a great shame to go to Phillip Island when it’s winter [sic] because it’s one of the best racetracks, so they also have to move this race.”

The MotoGP calendar has followed basically the same format for the last decade, but now the race order needs to change dramatically. The championship grew to 19 events this year, will grow to 20 next year, to 21 in 2021 and possibly to 22 in 2022.

“The line MotoGP is following is like in the USA, where they have more than 40 NASCAR races or NBA games,” added Rossi. “Now it looks like every race is a business, so if you make 21 races you make more money than 18, so it looks like the future will be this way.”

The never-ending expansion of the championship causes other problems. The MotoGP paddock is already full of divorcees whose families have said enough is enough – you either come home or you don’t come home. Surely that will only get worse with more races.

On the other hand, some paddock old-timers remember the days when the championship was shorter but they were away from home much longer, because teams tested between most races and unofficial practice often took place on Thursdays. Also, mechanics drove their team trucks around Europe and spent many days rebuilding engines, which now they don’t, at least if they’re lucky enough to work for a well-funded MotoGP team: they fly to races, work shorter hours when they’re at races and do much less testing.

This year’s Formula 1 championship numbers 21 races and the series is expected to expand to 25 races over the next few years, when events are likely to be reduced from three days to two days: practice and qualifying on Saturdays, racing on Sundays. MotoGP may follow this lead.

“For sure you can make a race from Saturday to Sunday, just two days,” said Rossi. “It’s different, but it’s not impossible.”

Will Rossi still be racing when that happens? I wouldn’t bet against it. I’ll see what my dreams tell me tonight.