Aprilia has been the butt of many a MotoGP fan’s joke in recent years because the Noale factory has finished last in the MotoGP constructors champion every year since the launch of the RS-GP in 2015.

The RS-GP is the perennial underperformer. Even last year’s all-new bike with all-new 90-degree V4 engine didn’t seem to change much – the 2020 RS-GP’s best finish was an eighth place at the season-ending Portuguese GP

However, strange as it may seem, results aren’t the best way to analyse a machine’s performance, at least until you’re fighting for wins. The best way to analyse how well a bike is performing is by measuring the gap to the race winner. Anyone who bothered to do that last season will have noticed that the 2020 Aprilia was in fact a huge step forward.

At Brno 2019, Aleix Espargaró finished 37 seconds behind the winner; last year he crossed the line just 15 seconds down. At Misano 2019 he finished the race 34 seconds back; last year that gap was reduced to 15 seconds. And at Valencia 2020, where he completed the 2019 race 33 seconds behind the winner, he took the chequered flag once again 15 seconds down. And both Misano 2020 and Valencia 2020 were faster than they were in 2019.

Fifteen seconds over a race distance is a deficit of around six-tenths per lap, which is still quite a gap to bridge in an era when most MotoGP races are won and lost by a couple of seconds, but Aprilia might’ve got a lot closer but for Covid-19.

Aprilia was hurt much more by the pandemic than any other factory in MotoGP. Its engineers went into last season confident of getting better and better, because they knew they could upgrade their brand-new 90-degree V4 engine up to eight times during the season, thanks to MotoGP’s concession regulations, written to give struggling factories the chance to catch the front-runners.

Thus Aprilia had to run the entire season with a prototype engine that only made its track debut at the Sepang tests in February, just weeks before the first race. The RS-GP’s aero was also all wrong. Aprilia had started with relatively low-downforce aero for the season-opening Qatar GP, with the intention of using a high-downforce design at other circuits. After the upgrade ban the RS-GP was stuck with too little downforce, which caused problems with wheelies and thereby reduced acceleration.

During this season’s abbreviated preseason tests – five days at Losail, instead of six at Sepang and Losail – Espargaró ran with the fastest group, ending up seventh quickest, four-tenths behind Ducati’s Jack Miller. More significantly his race pace was even better, less than two-tenths behind Fabio Quartararo, who had the best race-simulation pace of anyone.

Testing is not racing but there is little doubt Aprilia has taken another step forward this year, with a new chassis, new aero and new engine. Espargaró should be in the mix. 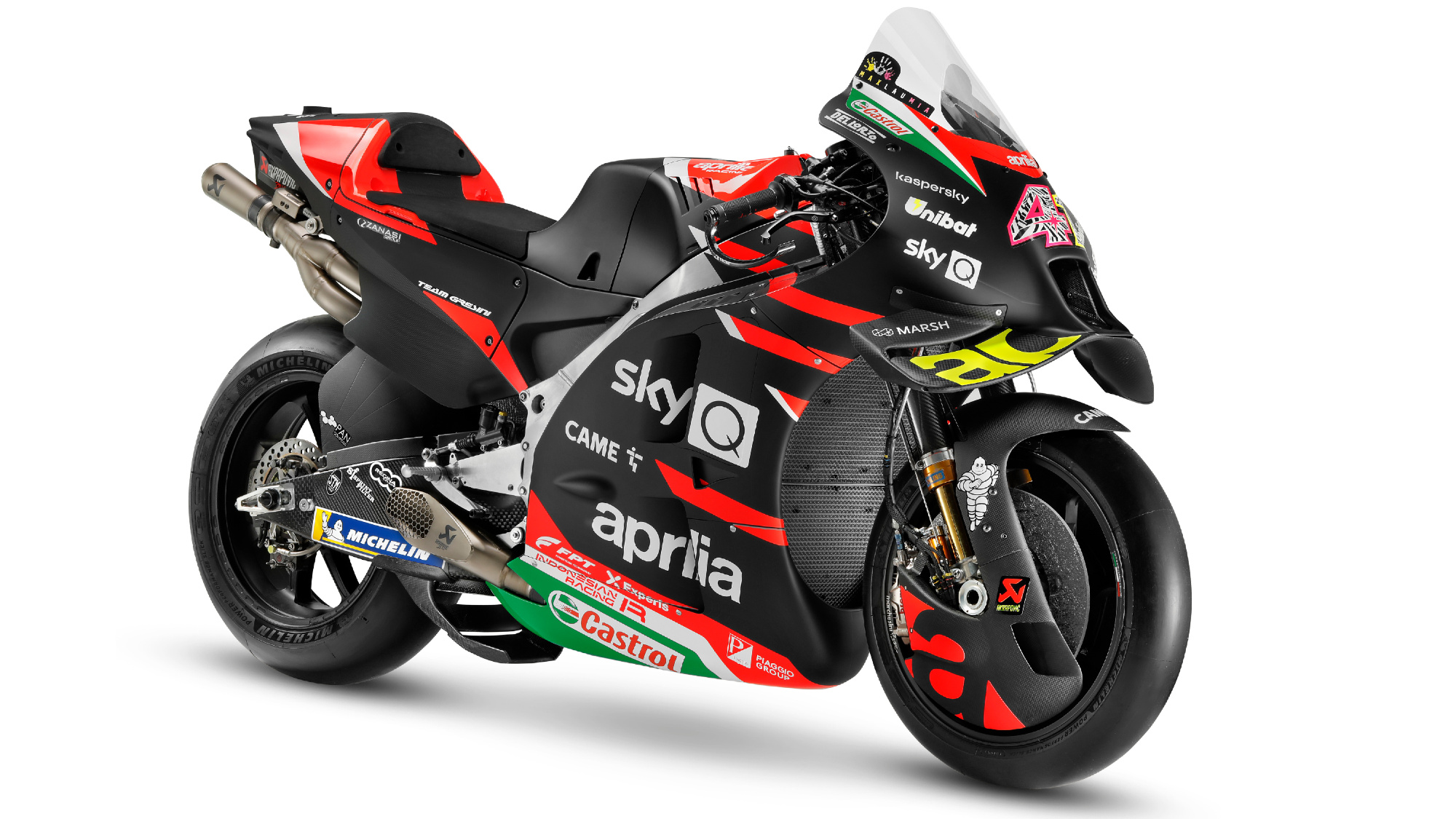 The 2021 RS-GP has a new engine, new chassis and new aero

Aprilia will do even better if race boss Massimo Rivola and chief engineer Romano Albesiano can convince Andrea Dovizioso to race the RS-GP.

The three-times MotoGP runner-up will test the bike at Jerez on the Monday, Tuesday and Wednesday before next month’s Portuguese GP.

Aprilia has played down the significance of the tests. “It’s not a trial matrimony,” says Rivola. But if Dovizioso feels the bike has the potential to fight at the front, if he gets on with the team, if he can get the deal he wants and if he really wants to keep racing why wouldn’t he be on the grid, replacing Lorenzo Savadori, who was a too-distant 2.5 seconds off the pace at the Losail tests?

Money really should not be an issue. Any factory that skimps on buying the best riders is wasting its time, because what’s the point of spending, say, £50 million to finish nowhere when you can spend £55 million to be in the fight for the podium and making headlines? Aprilia’s parent company Piaggio can certainly afford Dovizioso – Piaggio’s seven brands make it the biggest seller of powered two-wheelers in Europe.

Aprilia doesn’t only need Dovizioso because he’s fast, the company also needs him because he’s an excellent development rider and perhaps most importantly because he would come to Aprilia from Ducati, which is a bit like a KGB man joining the CIA (or vice versa, to be sure).

The Aprilia may not have desmodromic valves but the motorcycle’s overall architecture looks like the Ducati, a bit like how the KTM resembles the Honda. Dovizioso has eight years of 90-degree V4 intelligence which would be of priceless value to Albesiano. Pretty much whatever he wants will be worth it. And, of course, Dovizioso knows that. Negotiations will be tense.

Espargaró also wants Dovizioso to join Aprilia. Since he joined the factory in 2016 he’s never had a team-mate to push him. This is vital, because if you’re always the fastest rider you can never be sure that you’re pushing the bike to its maximum, which is a huge problem for development. You need another fast rider pushing to the limit just like you, then the engineers will know whether the bike has more speed in it. And two sets of high-quality data from two talented riders are of much, much more use than one set.

Even if Dovizioso only agrees to a testing contract with Aprilia, he will be a major boost to the RS-GP project just as former Honda rider Dani Pedrosa helped KTM with all his RC211V, RC212V and RC213V knowhow.

Either way, Dovizioso will annoy the hell out of Gigi Dall’Igna, the man he fell out with at Ducati. And let’s not forget that Dall’Igna took the same journey, in the opposite direction, when he defected from Aprilia to Ducati in November 2013.

Aprilia built its first proper MotoGP 1000cc engine for the 2016 season. Its vee angle was much narrower – 75 degrees – which shortens the engine, allowing a shorter bike, but also makes the bike taller. This RS-GP showed flashes of brilliance but after three seasons Albesiano understood he should follow Ducati and Honda, with their 90-degree vees, because they were doing all the winning. 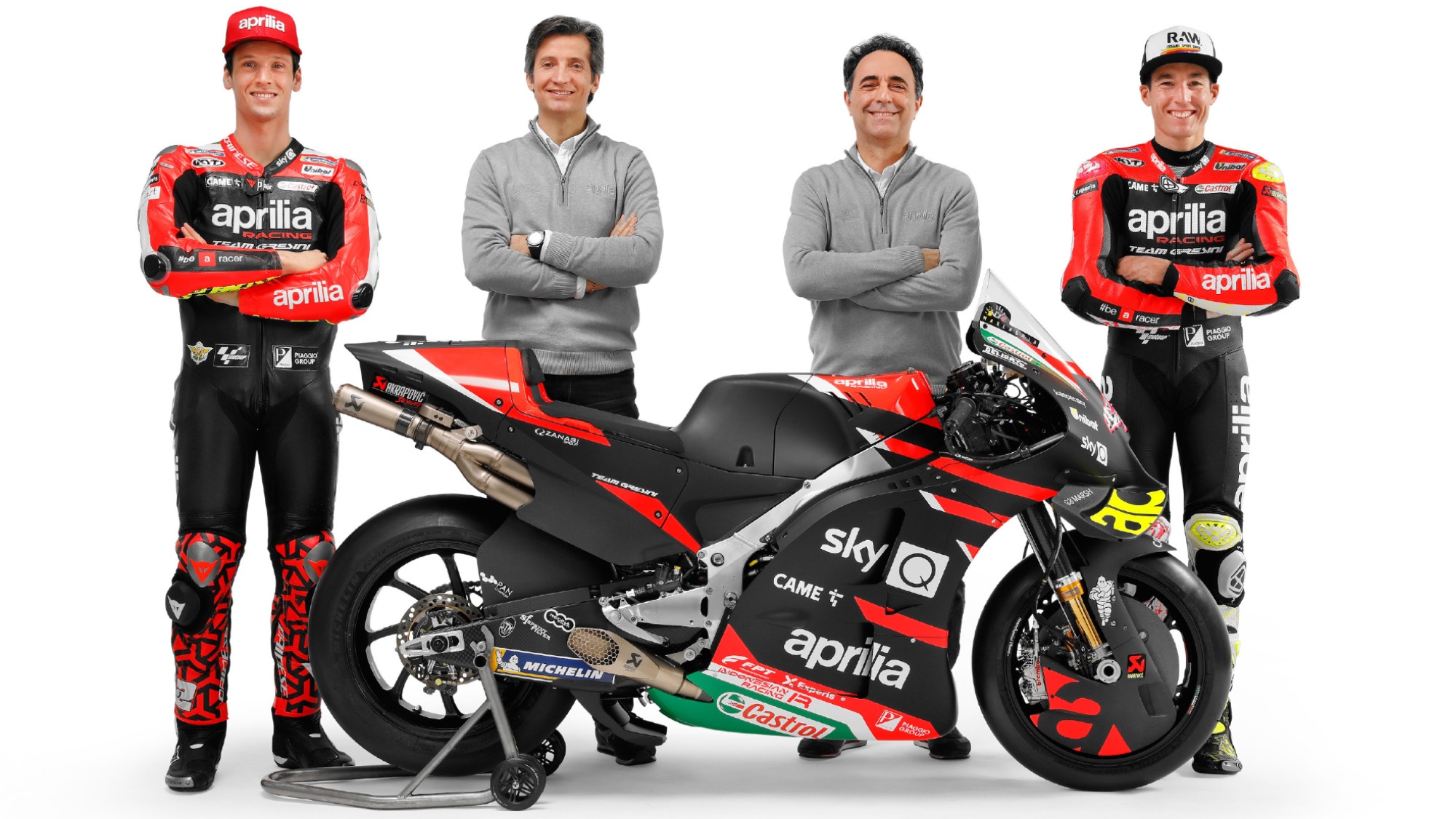 Aprilia 2021: Rivola and Albesiano with Savadori and Aleix Espargaró

A 90-degree V4 has several advantages. It’s got perfect primary balance, so the engine is stronger and therefore more tuneable. It also allows a greater variety of unbalanced firing configurations – big bang, long bang and so on – which helps engineers create the torque character the riders want. What more can you want from an engine than better torque delivery and more horsepower?

In fact the biggest aspect of performance that convinced Aprilia to switch to a 90-degree vee wasn’t corner-exit performance but corner-entry performance.

“The corner-entry phase of the bike was the biggest limit to performance with the narrow-vee engine,” says Albesiano. “So one big reason we went to a 90-degree vee is because this configuration offers us the simplest exhaust layout and allows us to use the exhaust valve in a better way to improve the bike’s engine-braking.”

The 2021 RS-GP is largely different to the 2020 bike, thanks to everything Aprilia learned during last year’s 14 races. Weight is much reduced, thanks in part to a carbon-fibre swingarm. The bike is now under the minimum weight limit, so engineers can move ballast around to fine-tune overall balance and try different gadgets and devices, without worrying about increasing weight.

Engine performance is improved, thanks to new cylinder heads which give better torque delivery. Albesiano rates the 2020 to 2021 improvement in this area as big as 2019 to 2020. However, the reliability of the latest engine has yet to be proven in the heat of battle.

One upgrade that’s more significant than might be imagined is the rear seat structure, which plays an important role in the harmonics of the bike. Last year at some tracks Aprilia had chatter problems – partly due to the extra grip provided by Michelin’s latest rear slick – so the new seat changes the bike’s vibratory behaviour to exorcise the chatter.

Despite the latest aerodynamic design – with its dramatic blade across the nose of the fairing – Aprilia may still suffer with aero issues at some tracks. The 2021 aero is so much better than the 2020 version that Aprilia now has only one aero pack that works with the 2021 bike, while most other factories should be able to switch between their 2020 and 2021 packs. Thus the focus of 2021 R&D will be the engine (especially more peak power), gearshift, electronics and chassis. 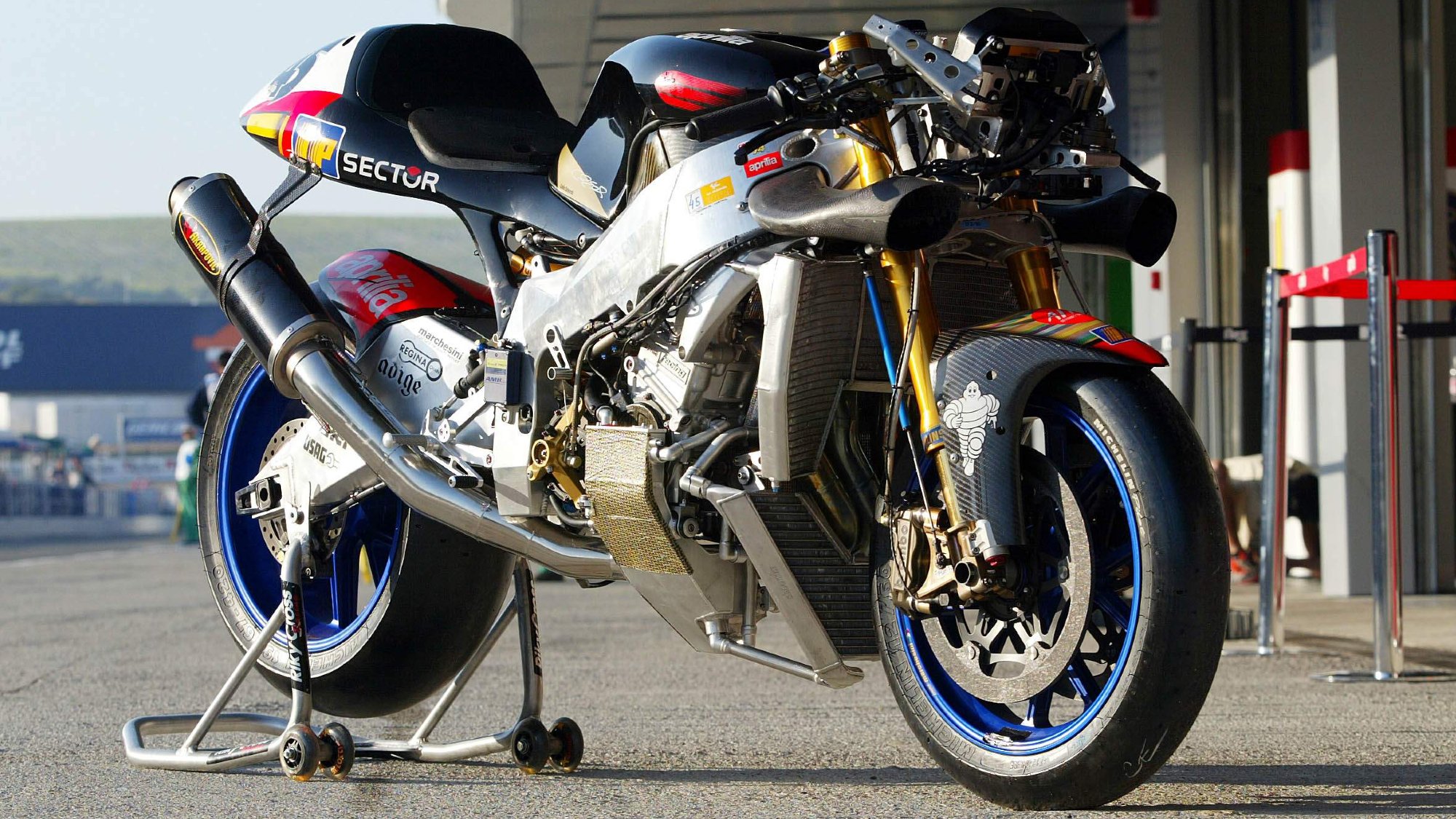 “The lap times in testing prove we can fight with the best and also my race simulations were not far from the fastest,” says the 31-year-old Spaniard. “The new engine is more elastic and smoother at the bottom, which allows me to use higher-power torque maps. Plus we have more downforce from the new aerodynamics, so we get less wheelie, so I can accelerate a lot better than last year. But unfortunately we lose a bit of top speed, so we still have to work to find the right balance.”

The latest chassis is another step forward, but just like the aero and everything else in racing, when you win in one area of performance you lose in another.

“I like the new chassis because this year’s RS-GP is much more stable than last year’s, but it feels heavier to move around, so again we need to find the balance to have more agility,” Espargaró  adds. “I also like the new seat because I feel more inside the bike and it’s more rigid, which allow me to push more and move the bike better.”

Albesiano’s target for 2021 is straightforward.

“Last year we closed the gap to the fastest bikes quite a lot,” he says. “I think this could be the year when we can catch the others. This is the target – to close the gap to zero.”

Aprilia has been chasing premier class success since 1994, when it challenged the four-cylinder 500s with a bored-and-stroked RSW250 twin. The bike scored pole positions and podiums but never won a race.

In 2002 the factory unleashed the 990cc RS3 Cube four-stroke. The Cube was the first MotoGP bike with pneumatic valves (thanks to Cosworth Formula 1 influence) and the first to surpass 200mph, during practice for that year’s Italian GP, but it was a handful to ride.

“You take a bull, cut off its balls, dangle them in front of its face, then climb on its back…” commented Cube rider Colin Edwards.

The Cube project was axed at the end of 2004 and Aprilia stayed out of MotoGP until 2012, when it took advantage of new CRT regulations to build a bike powered by its RSV4 superbike engine (designed by Dall’Igna). This machine ran under the ART tag (for Aprilia Racing Technology).

In 2015 Aprilia took the first step towards running another proper MotoGP bike with the first RS-GP, which during its rookie year was powered by an RSV4 ART engine.

After almost three decades in the premier class could Aprilia finally win a MotoGP race?