They call it progress. This year’s 1000cc MotoGP bikes make around 280 horsepower and are good for 220mph/355km/h. These machines are the pinnacle of 125 years of development of the internal-combustion engine and motorcycle chassis and electronics technology. In some ways they are easy to ride, but in other ways they are not.

One hundred and ten years ago Londoner Will Cook turned up at Brooklands – the world’s first purpose-built racetrack – aiming to become the first motorcyclist to break the 90mph barrier.

His secret weapon was a huge JAP engine (manufactured at JA Prestwich’s factory in Tottenham, north London) which had been rejected by TT racers because it was too much of a handful on the Isle of Man roads. The 80-degree v-twin had a capacity of 2714cc (!), with a bore and stroke of 120mm.

The engine had direct drive to the rear wheel, so the wheel turned at engine speed. There was no clutch, no gearbox, no brakes and no suspension

“It is a fearsome looking object, mostly engine,” wrote a reporter from Motor Cycling magazine.

The JAP was anything but easy to ride and just starting it was a bit of a nightmare: First find a steep hill, then remove a blanking plug from the top of each cylinder and poke in a wheel spoke to check the position of each piston. Next squirt some neat fuel towards the inlet valves, open the valve lifters of both cylinders, push like buggery, drop one lifter as the first cylinder fired (with a bit of luck), drop the other lifter as the second cylinder fired.

This is when things got really difficult. Once the engine was alive, the rider had to constantly juggle with the ignition advance/retard lever, the air-mixture lever and the throttle lever. These were the only ways to control his speed, because the engine had direct drive to the rear wheel, so the wheel turned at engine speed. There was no clutch, no gearbox, no brakes and no suspension.

Cook was a brave man and knew what he was doing. He surpassed 90mph at Brooklands, but a technicality denied him the official record.

(Interestingly this entire motorcycle was manufactured in three different factories in London: JAP in Tottenham, North London Garages in Highbury and Chater Lea in Finsbury. The 2714cc engine was later used in an aeroplane.)

Was the NLG JAP difficult to ride? Christ, yes! Would a Honda RC213V be easier to ride around Mugello? Of course.

Instead the rider will take that five percent and invest it elsewhere. He will experiment with different ways of working the throttle, using the brakes, shifting his body weight, exploiting the traction and so on. In the end he will invest that five per cent somewhere to save him a tenth of a second per lap. It certainly won’t make his life any easier but it might make him a fraction faster.

Back in 1989 I followed the Pharaohs Rally in Egypt, a warm-up event for the Paris-Dakar, which started by the pyramids, raced across the desert to the Valley of the Kings, over to the Red Sea and back to the pyramids. About 2000 miles in all. At one night stop I got chatting to two-times Dakar winner Gaston Rahier.

The diminutive, rock-hard Belgian told me that the rules required riders to carry a minimum of ten litres of water to keep them alive in case they got lost. (This was before tracking devices.) Then Rahier chuckled, adding that the first thing he did when he was out of sight of starting officials was ditch most of the water, to save a few kilos.

This is the mentality of a racer: they don’t want an easy life; they want to go fast.

Many decades ago roadracers struggled to go as fast as they could because they spent much of their track time keeping their bikes running. Even in the 1960s and 1970s, riders rode with spare spark plugs and a plug spanner, so if the engine oiled a plug (a common two-stroke problem) they could pull over, fit a new plug and get going again. Races were sometimes won like this.

As engineering improved and motorcycles got better, riders were able to spend more time thinking about going fast and less time keeping their bikes hanging together. 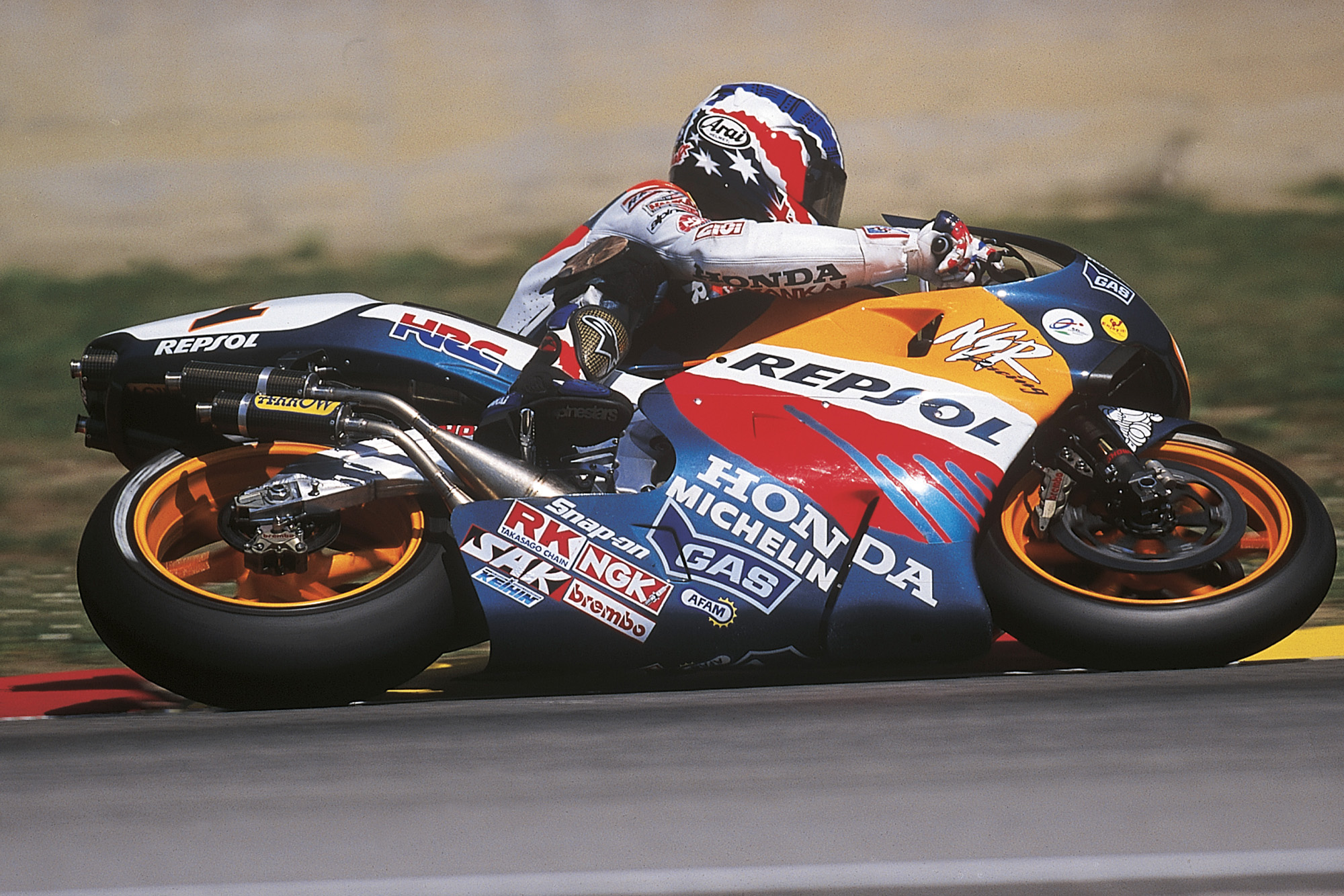 For the past 30 years or so, they’ve been able to focus 100 per cent on lap times. So the bikes have got easier to ride but not easier to race.

Every time there’s a shift in technology that increases the user-friendliness of race bikes there are always some fans who cry: it’s getting too easy!

In 1998, GPs switched to unleaded fuel. The new fuel softened the power delivery so much that Mick Doohan complained the once fiery 500s had been transformed to big 250s. This is why 500 rookie Max Biaggi had a relatively easy time graduating from 250s to 500s in 1998.

But did unleaded fuel make 500s easier to race at the absolute limit? Nope. Doohan simply took that ease of use and invested it elsewhere.

‘I tell Cal that with a Honda MotoGP bike you have to fight and that’s why we pay you!’

Everyone knows Honda’s RC213V is no armchair ride. But why? Best man to ask is Takeo Yokoyama, HRC’s technical manager who works with Marc Márquez, Cal Crutchlow and now Alex…

“Before unleaded fuel you went into a corner, laid the bike on its side, then you picked it up and got it out of there, so the cornering line was more of a V shape,” said the five-time 500 champ. “When they brought in unleaded fuel that was the first year you could start riding the 500s with corner speed.”

The move to MotoGP four-strokes was the next big step in ease of use. “Everything is more gentle with the four-strokes,’ said Valentino Rossi, winner of the last 500cc title in 2001 and the first MotoGP crown in 2002. “The response is more docile, which allows you to ride more comfortably.”

True, Rossi did have an easy time in 2002 and 2003 because Honda’s five-cylinder RC211V was far and away the best bike on the grid. But after that, not so much. His average crash rate during the last 18 years of MotoGP is higher than it was during his two years on 500s.

Traction control was the next step. In theory at least. “The more intelligent the rider is, the more he’s going to gain from these electronics; some of them are too dumb to gain anything,” said Valentino Rossi’s crew chief Jeremy Burgess in the early years of MotoGP rider controls.

In 2007 I remember eavesdropping in the Ducati garage during preseason testing at Jerez. The Desmosedici had just flicked Casey Stoner to the moon and he wasn’t happy about it. “Where was the traction control?” he asked his crew chief.

Stoner was one of the cleverer riders. He wanted traction control to save him in a crisis but he mostly hated the technology, because it spoiled his connection of the motorcycle through ignition cuts and torque control. Like all the fastest riders of the MotoGP generation, the Aussie usually turned his TC right down.

Of course, TC did help lesser riders get closer to the greats, so Stoner and other fast guys had to look elsewhere to leave them behind. Thus once again new technology didn’t make the bikes easier to ride. 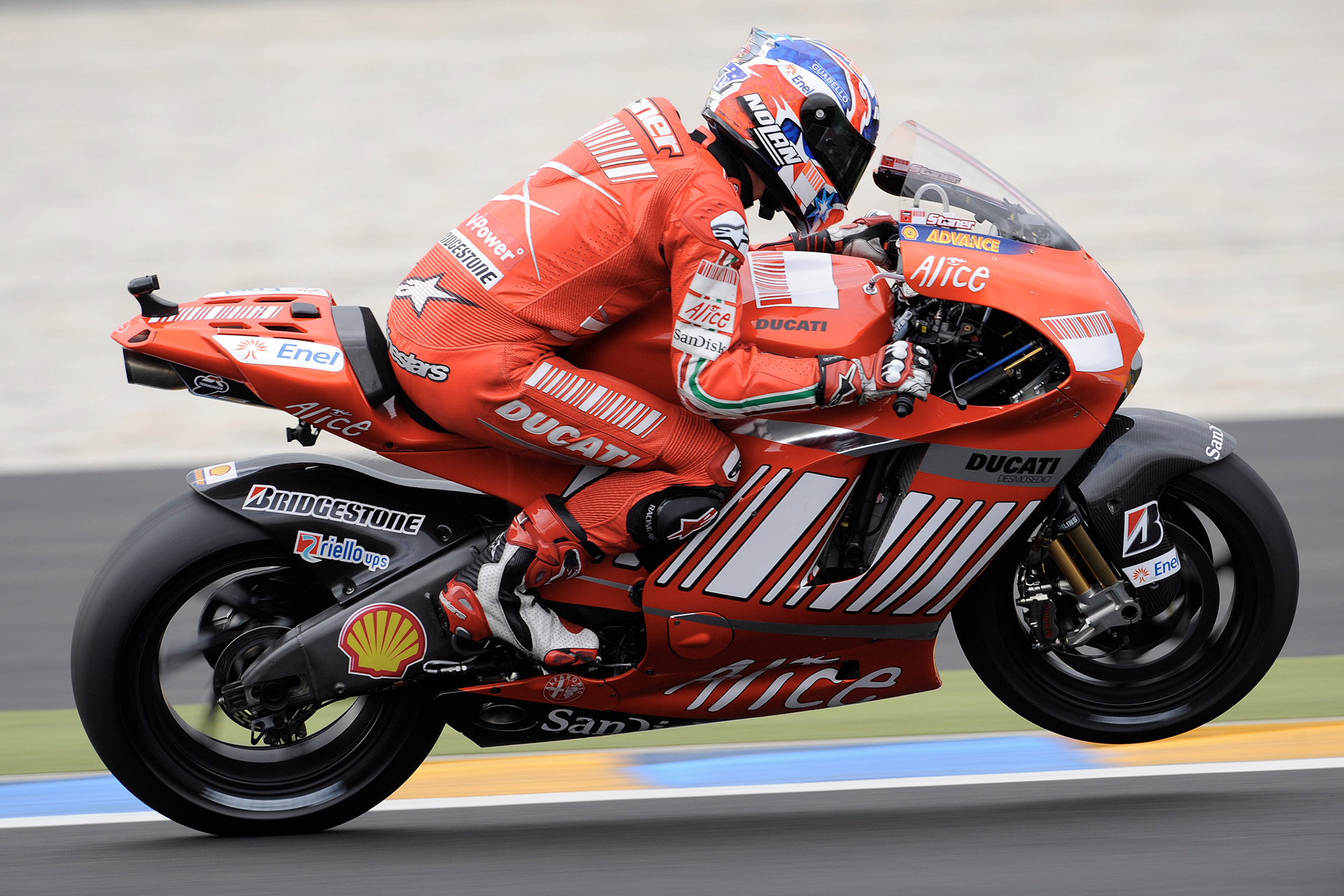 Casey Stoner tamed Ducati’s Desmosedici like no one else

A little TC allowed Stoner to get on the throttle so hard and so early that he was unloading the front tyre too early in the corner, with potentially disastrous results. How to increase front load and grip? Easy, just use the front brake, in the middle of the corner.

“It depends on grip and everything,” said the 2007 and 2011 MotoGP champ. “If the bike’s working really well you may not need to keep the front loaded; other times you have to run around the corner with the front brake on.”

Other times Stoner preferred to use the rev limiter to avoid using the TC, like at Turn Three at Valencia, the fast left after the first hairpin. “I’d slide going in there, knowing that I was going to hit the limiter any second, then the limiter would be my electronics by not allowing me to slide any further. Basically the electronics are the same thing as the rev limiter, they just cut in earlier.”

Traction control has certainly reduced the number of bone-crunching highsides in MotoGP, but there are more crashes now than ever, because there are fewer areas where riders can make time, so they take bigger risks when they’re charging into corners.

And that’s why Marc Márquez has developed his own anti-crash control system, using his elbows as outriggers, so when the front tyre slides he pushes an elbow into the asphalt, which hopefully destresses the front tyre and keeps him on two wheels.

Modern MotoGP riders have the best of everything: engines, frames, brakes, suspension, electronics and tyres. Does this make them easy to ride? Yes, if you or I were to borrow Márquez’s RC213V for a few gentle laps of Mugello or Phillip Island. Does it make the bikes easier to race at the limit? Never!