Some people hate MotoGP’s rules over track-limits, but to understand why they are there we need to look at racing safety over the years 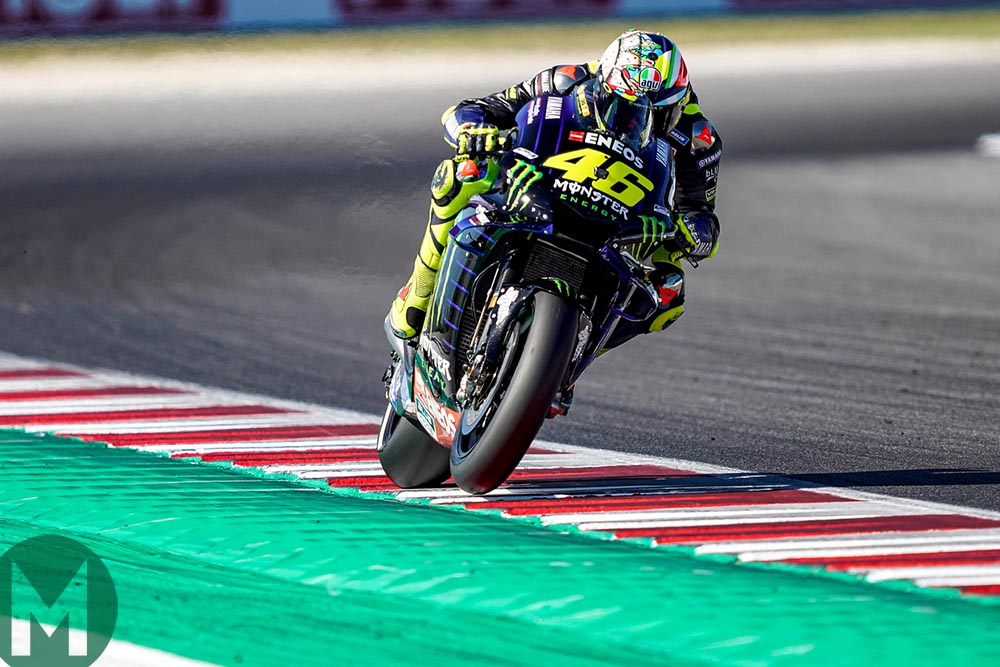 Rossi at Misano, an example of how not to design a track to avoid track-limits issues Photo: Yamaha

It’s a funny old world. Here we are in 2019 arguing about MotoGP riders exceeding track limits when motorcycle racing already had the best punishment for this crime more than a hundred years ago.

Great big stone walls did the job just fine – the ultimate deterrent to riders who sought to better their lap times by taking faster, wider lines.

Of course, the punishment could be severe. But, hey, as cynics used to say (and some still do) “the throttle works both ways”.

The first rider to fatally exceed track limits at the Isle of Man TT was Rudge factory rider Victor Surridge, who ran wide exiting the Glen Helen left-hander and rode into a rockface, on 27th July 1911.

Helpers at the nearby hotel tried to revive him with brandy, but without success.

Similar ends for riders pushing the boundaries were horrifically common over the decades, until clever people created purpose-built race tracks on open land, so the asphalt wasn’t bordered by walls, buildings and telegraph poles.

In Britain, dozens of these tracks were born out of disused Second World War airfields, including Goodwood, a vital Battle of Britain base.

Goodwood hosted its first (and last) motorcycle meeting in April 1951, which was dominated by Norton’s Geoff Duke. You would’ve thought that everyone would’ve been delighted by the track’s improved safety. But no, one reporter harrumphed that it allowed riders to see all the way through the corners, which encouraged them to take risks they wouldn’t usually take.

The track-limits rules are a direct consequence of making racing safer. So why argue against them?

Purpose-built circuits saved the lives of countless bike racers, but soon they started killing them again. During the late 1960s, Formula 1 drivers demanded Armco barriers to contain the flight of out-of-control F1 cars. The barriers were an important safety improvement for car racers, but they were no softer than brick-walls for bike racers. In the Grand Prix paddock, they were nicknamed “death rails.”

Finally, some circuits removed the steel barriers and erected in their place rows of wire fencing. Only one problem, the catch fencing was held in place by four-by-four inch wooden uprights. If you crashed and missed the uprights you usually got up and walked away. If you hit an upright you most likely didn’t.

Then came gravel traps, which seemed the perfect way to slow bikes and riders before they hit anything. They were a big improvement but they also had their problems. Often they caused a rider to flip high into the air and barrel-roll through the gravel, causing all kinds of injuries and broken bones.

Most famously 1990s legend Wayne Rainey, who was paralysed from the chest down when he careered through a Misano gravel trap in September 1993.

Some time ago, the car racing world discovered a better way of looking after its drivers. They replaced gravel traps with asphalt runoff, so drivers could continue using the brakes to shed speed after they had left the track.

At the time, motorcycle racing thought F1’s asphalt runoffs were a disaster: how could asphalt provide softer landings for a bike racer than gravel beds?

However, they can, when used in the correct situation. When bike racers fall they slide across the asphalt, with less likelihood of getting flipped.

But if you give motorcycle racers the feeling that they won’t get hurt when they crash, they will use that freedom to go faster.

Hence the introduction of track-limits regulations and green zones – to stop riders taking advantage of all that lovely extra asphalt.

Some fans and even some former racers are against all this. Bring back the gravel traps, they cry! Put back the grass and gravel traps to make the riders pay if they make a mistake like they used to! These new track-limits rules are modern health-and-safety nonsense! Too many rules!

This is idiocy. Are these people arguing to make motorcycle racing more dangerous again? Really?!

Last year in MotoGP there were 1,077 crashes and 15 broken bones (one leg, one ankle, four wrists, four fingers and five collarbones). That’s a good thing and it’s why oldies like Valentino Rossi and Cal Crutchlow are still racing.

Just think back to the pre-Rossi era – every single one of the winners of the premier-class world title during the 1990s retired early because of injury: Rainey, Kevin Schwantz, Mick Doohan and Alex Crivillé.

All it takes is a little thought to understand where we are and how and why we got here. Brick walls were very dangerous. Armco was very dangerous. Catch fencing was slightly less dangerous.

Gravel traps were slightly less dangerous again, but not always the best solution. I suggest you re-watch Jorge Lorenzo’s Dutch TT accident in an Assen gravel trap, which was pretty much identical to Rainey’s at Misano, with an uncomfortably similar outcome.

Next came Astroturf, to replace the natural grass at the side of the track, but this was never a great idea and caused at least as many crashes as it saved. Finally, came asphalt, which can be better than all the above. So why argue against it?

The track-limits rules are a direct consequence of making racing safer. So why argue against them?

These rules are relatively new, so they are still developing. But the basic premise is so simple that ANY bike racer can understand it: if you ride onto the green you will lose your practice/qualifying lap or possibly get a long-lap penalty in the race.

Some riders complain they’ve gained no advantage when they get penalised for venturing into a green zone. But if they didn’t gain an advantage, they certainly avoided a disadvantage because all they need do to avoid the green is feather the throttle, which obviously slows them down.

MotoGP’s stewards use numerous camera angles – many more than we get to see – including image-recognition cameras that automatically record and identify riders who run wide. This is why their rulings sometimes don’t make sense to us.

The rules were revised and clarified at Aragon. These are the salient points: 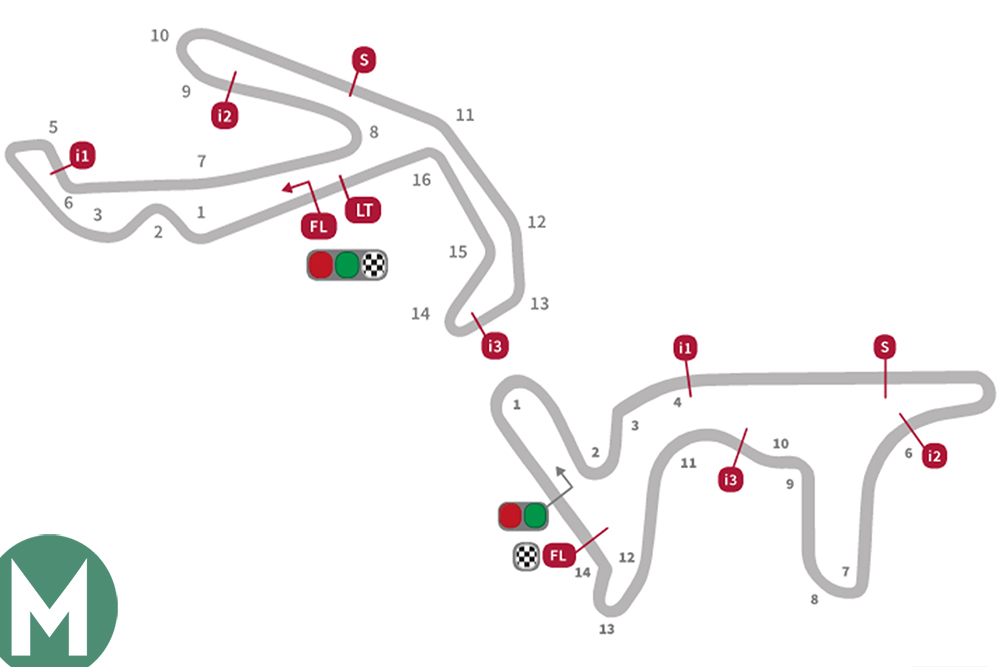 Take two of the last three MotoGP rounds: Silverstone and Misano. At Silverstone there were five track-limits offences during the MotoGP, Moto2 and Moto3 races, while at Misano there were 39!

Misano is a tight little track that runs in the opposite direction of the original layout, so it’s a good example of how not to design a racetrack to avoid track-limits problems. Faster, more open tracks like Silverstone create fewer problems.

“The problem of track limits arises historically with tracks that have been designed instead of just built,” says racetrack designer, Jarno Zaffelli, who created Termas de Rio Hondo. “The use of geometric corners – the son of the CAD straight-curve tool – instead of flowing, more natural or properly calculated layouts, makes the racing line more demanding in terms of track limits.

“For example, there are no problems with track limits at circuits like Termas and Phillip Island. But when you have corners, typically 90-degrees turns with very low kerbs, bikes will exceed track limits on the exit and cars will try to cut the inside. Therefore the solution to track limits starts with the design of the track.”