Pecco Bagnaia and Fabio Quartararo stood on the top two steps of the Misano podium but the real star of the show was third-placed rookie Enea Bastianini.

No one was expecting anything from the reigning Moto2 world champion who rides a two-year-old Ducati Desmosedici and had qualified on the fourth row of the grid, just ahead of Takaaki Nakagami, wild-card Michel Pirro and fellow rookie Luca Marini. Except, of course, Bastianini and his crew.

During the first few laps he tore through the pack aboard his third-hand Duke, showing little respect for his elders and supposedly betters, all of them mounted on latest-spec factory missiles: Álex Rins, Pol Espargaró, Aleix Espargaró, Marc Márquez and finally Jack Miller.

“It was incredible for me, overtaking big riders like Rins, Jack, and Márquez,” he said, that huge grin spread across his face. “It was fantastic and really nice to overtake Márquez on the brakes.”

“When I was following Bastianini I understood that I was over my limit, so I said to myself, cool down and let him go,” laughed the winner of six of the last eight MotoGP titles. “He was riding very well and really understands how to ride the Ducati – he was braking so late and exiting the corners with a lot of torque and grip. He was doing everything in the correct way and when you do this with a MotoGP bike the lap time arrives.”

The 23-year-old’s speed was mind-boggling, especially during the second half of the race when tyres started to degrade. While everyone else went slower Bastianini actually went faster, twice breaking the lap record.

How was this even possible?

Bastianini had already proved his talent on a MotoGP bike, just sneaking inside the top ten at Losail, Portimao and Catalunya. Then at Aragon he finished a very competitive sixth.

“At Aragon I adapted my style, so I’m softer with my movements on the bike, so now I am more relaxed on the bike and I can be fast all the way through the race,” he added. “I have seen the data of Pecco and Jack – their bikes are not the same as mine, but the DNA is similar – and once you understand some of the bike’s movements you can be softer and more relaxed.” 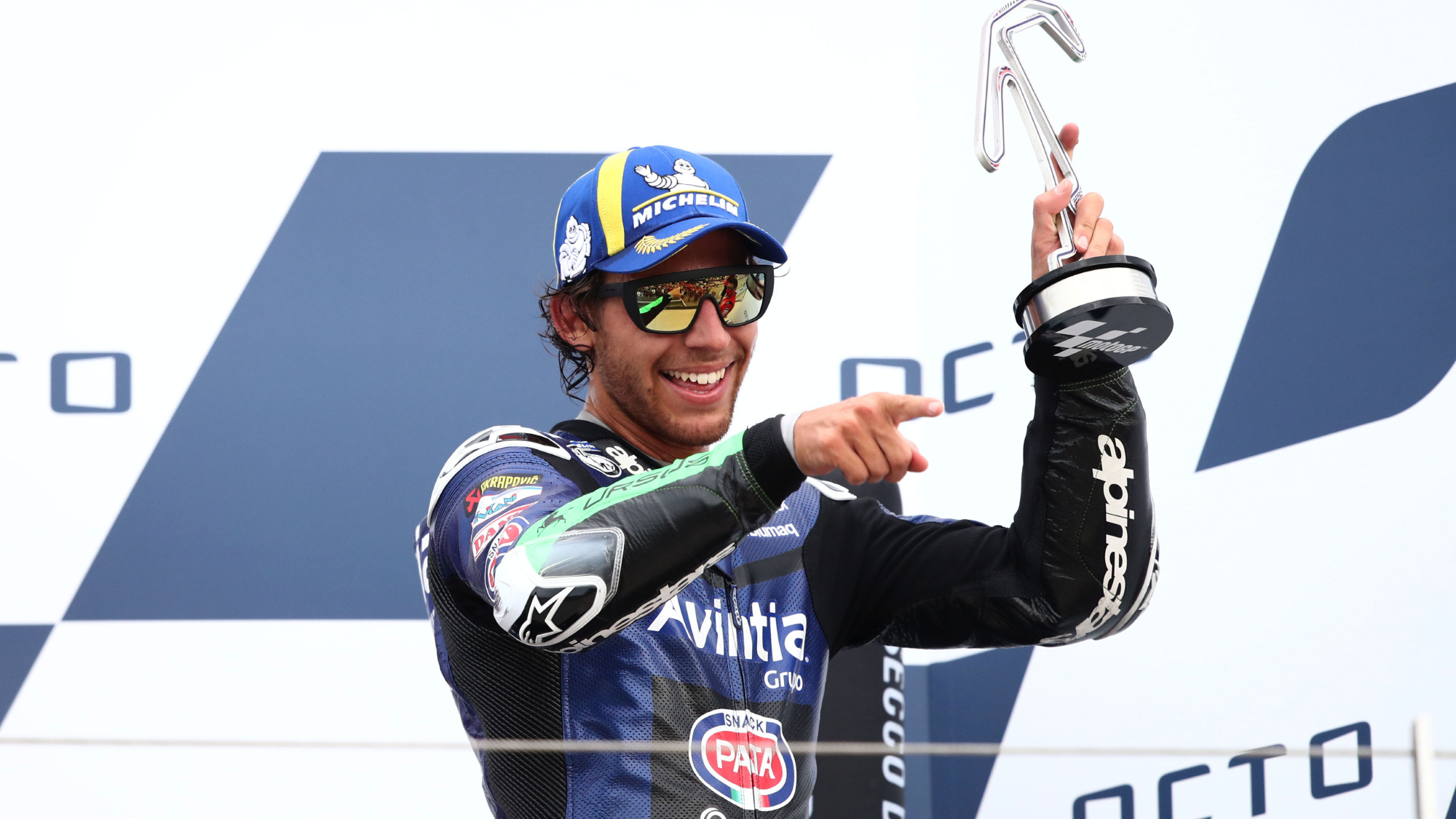 Bastianini’s late race pace was so strong there’s no doubt he could’ve challenged the two riders ahead of him, if he had started further up the grid. After the first five laps he was 5.6sec behind Bagnaia, at the finish he was 4.8sec down, despite him slowing down during the final laps, while Bagnaia increased his pace to hold off Quartararo.

“After I overtook Jack I saw my pit-board and said, third place is fine, so I closed the throttle a bit in the last six laps.”

Giribuola believes his new rider has something of the Marc Márquez about him, with that superpower to control the Michelin front tyre.

Márquez’s mastery of the front tyre is the secret to his successes, because any top rider can extract the maximum from a rear tyre but the front is much trickier, especially Michelin’s MotoGP front, which is a bit of a tightrope walk.

“For sure Enea has a special feeling with the front tyre, so it’s like watching Márquez when he’s riding at his best,” said Giribuola on Sunday evening. “For example the other riders go slower when the rear tyre is used but Enea improves because he uses the front tyre more. That’s why his pace during the race is very consistent, because he doesn’t use the potential of the rear tyre so much but more the front. In today’s race the front tyre made the difference for him.”

Last year Bagnaia started practicing saving front-tyre slides with his elbows, because he knows this is what he will have to do if he is to better Márquez and the other top riders.

“I hope for Enea and also for me that he can become another Marc Márquez because I hope we will make some good results in the future.

“If I have to say one characteristic that makes him special it’s his way of really using the front tyre. At the moment he’s not really using his elbows to save front slides but I think this will come.”

The fact that Bastianini took third on such an ancient bike was hugely impressive, but in fact the 2019 Duke works quite well around Misano.

“I think this is one of our good tracks with the bike – there are some strong points for us at this circuit,” added Giribuola. “It’s important to tell the rider where he has to really push and gain the maximum from our bike, because if you concentrate on the other areas for sure you can’t go through those areas like the Yamaha. We accelerate really well, so you have to gain in two points in this track that are really key.”

Which points are those?

“I cannot tell you!” 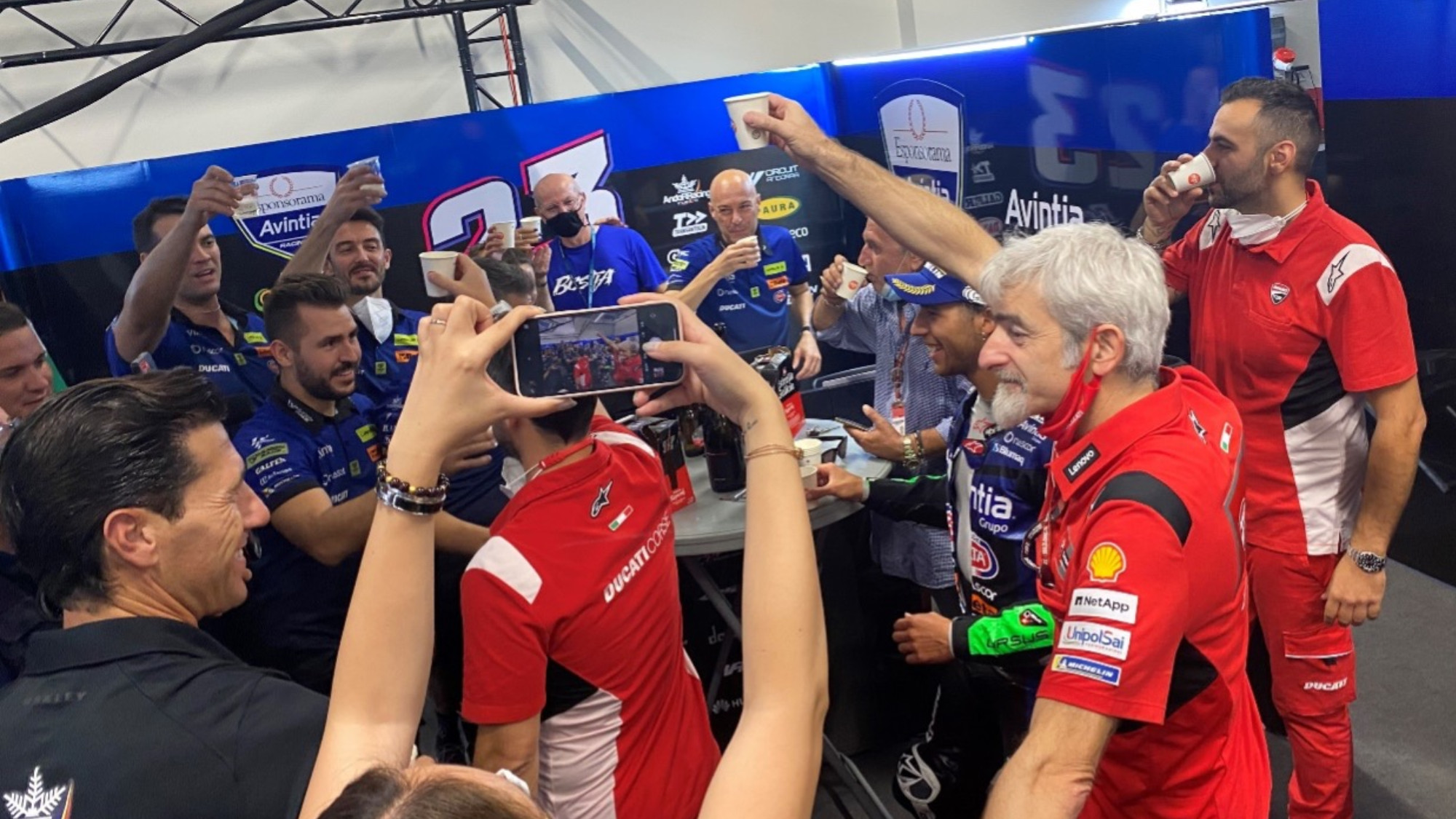 Bastianini’s manager is Carlo Pernat, the MotoGP paddock perennial who’s been around since the early 1980s, working for all the Italian factories at one time or another and managing riders from Max Biaggi to Marco Simoncelli and now Bastianini.

“Enea is a natural talent,” said Pernat from behind his blackout shades. “He races in MotoGP very well because for him the consumption of the tyre is nothing, because he rides in a very good way.”

“Enea’s riding style is better for MotoGP than it was for Moto3 and Moto2,” added Pernat. “He was born for MotoGP because his riding style is important for the tyres. He’s a big talent. He’s also very quiet in the box, so he’s similar to Dovizioso, but a bit more talented. With Alberto he uses many things that Dovizioso used; their riders styles are quite similar.”

Pernat has managed Bastianini for the last four years, since he split with previous manager Emilio Alzamora. The youngster has always done things his own way – he was born and raised in Rimini, a few minutes from Misano – and yet he has never been involved with the VR46 Riders Academy and he never rode for the Italian Federation team, another of Italy’s rider-development programmes.

Misano has always been kind to him – he won his first Moto3 race there in 2015, won last year’s Emilio Romagna Moto2 race there and now a first MotoGP podium at the track.

‘Bestia’ – his nickname, Italian for ‘beast’– will be in high demand with other teams and factories. Ducati has so many young talents on its books that maybe him and Pernat will go looking elsewhere for a full-factory ride if they can’t get one from the Bolognese…