Fabio Quartararo is surfing the crest of a wave at the moment, hanging loose like the finest surfer, minutely adjusting his position on the motorcycle every millisecond, turning down the electronics and doing the work himself, like all the best riders.

The young Frenchman’s fifth win of 2021 was, to use a little surfer lingo “totally tubular” (look it up). Last year he learned the only sure-fire way to win aboard the Yamaha was to get out front as quick as possible and do his own thing, making sure no one gets close enough to steal his lines or overheat his front tyre. This is why the tightest of his five 2021 winning margins so far is 1.5 seconds at the Doha GP.

Finally, it seems, Yamaha has got its YZR-M1 back to where it was in the Bridgestone days: probably the most neutral bike on the grid – at least in Quartararo’s hands – most especially at those serpentine venues where it can use its corner speed to devastating effect, like Losail, Portimao, Mugello, Assen and Silverstone, the five tracks where Quartararo has topped the podium.

Of course, wins that look easy never are easy. Indeed the entire weekend had been tricky for not only Quartararo but for everyone else, because track temperatures only once reached 30 degrees, the desired minimum temperature for Michelin’s MotoGP tyres.

Add two other factors – the Silverstone layout and the bitter winds that sweep across the circuit – had the entire grid skating on thin ice throughout the weekend, trying to get enough heat into their tyres to attack the circuit’s daunting high-speed corners with any confidence.

Marc Márquez’s huge 170mph/274kmh FP1 crash certainly got everyone’s attention. Then in FP2 Quartararo went flying at the dead-slow Vale left-hander – an off-throttle highside – limping away with a badly sprained ankle. That could’ve been his championship gone, right there. 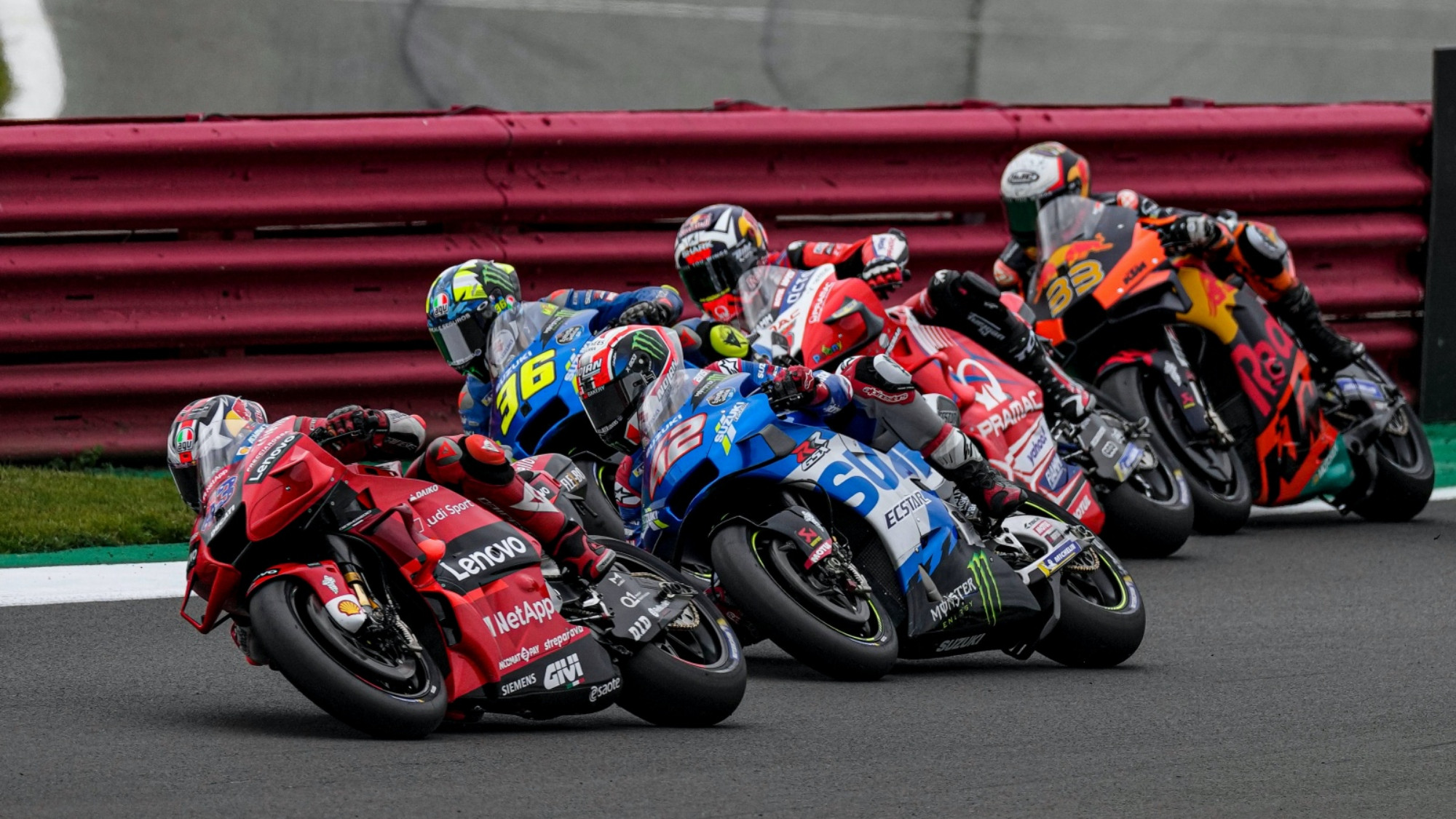 While Mir (no36) went backwards with a dud front tyre, team-mate Alex Rins (no42) surged

“From the outside Fabio’s weekend looked easy but to be honest it’s been a difficult weekend,” explained his crew chief Diego Gubellini after the race. “We couldn’t find the perfect moment to try the right tyres in practice and many things weren’t quite right, but finally he did a fantastic job.”

Quartararo’s Vale highside came while trying the hard-compound rear during FP2, the warmest session of the weekend, but not warm enough.

“We always we try to check the potential of every tyre, so it wasn’t a mistake, because whenever you try a tyre you must push hard to feel its performance,” added Gubellini.

If Quartararo wasn’t so lucky with that hard tyre, his two main title rivals were even less lucky on Sunday.

Quartararo arrived at Silverstone 47 points ahead of Suzuki’s reigning world champion Joan Mir and Ducati’s Pecco Bagnaia, tied on 134 points each. By no means an insurmountable gap.

On Sunday night Quartararo left Britain 65 points ahead of Mir and 69 in front of Bagnaia with six races remaining, which means – barring disasters – the Yamaha man has one hand on the 2021 MotoGP crown.

Quartararo’s points advantage didn’t grow entirely thanks to his inspired riding, it grew because both Mir and Bagnaia got dud tyres on Sunday afternoon.

Mir’s front – the same soft spec he had used throughout much of Friday and Saturday – lost a chunk of rubber in the early stages of the race, so he was lucky to finish, let alone scrape seven points for ninth place.

Bagnaia found himself in even deeper trouble. The Italian had qualified two hundredths of a second off pole position on Saturday afternoon, so he had a good chance of scoring his first MotoGP victory. Instead he went backwards in the race, from third on lap one to 14th at the finish. All that work for two points and probably the end to his championship aspirations. 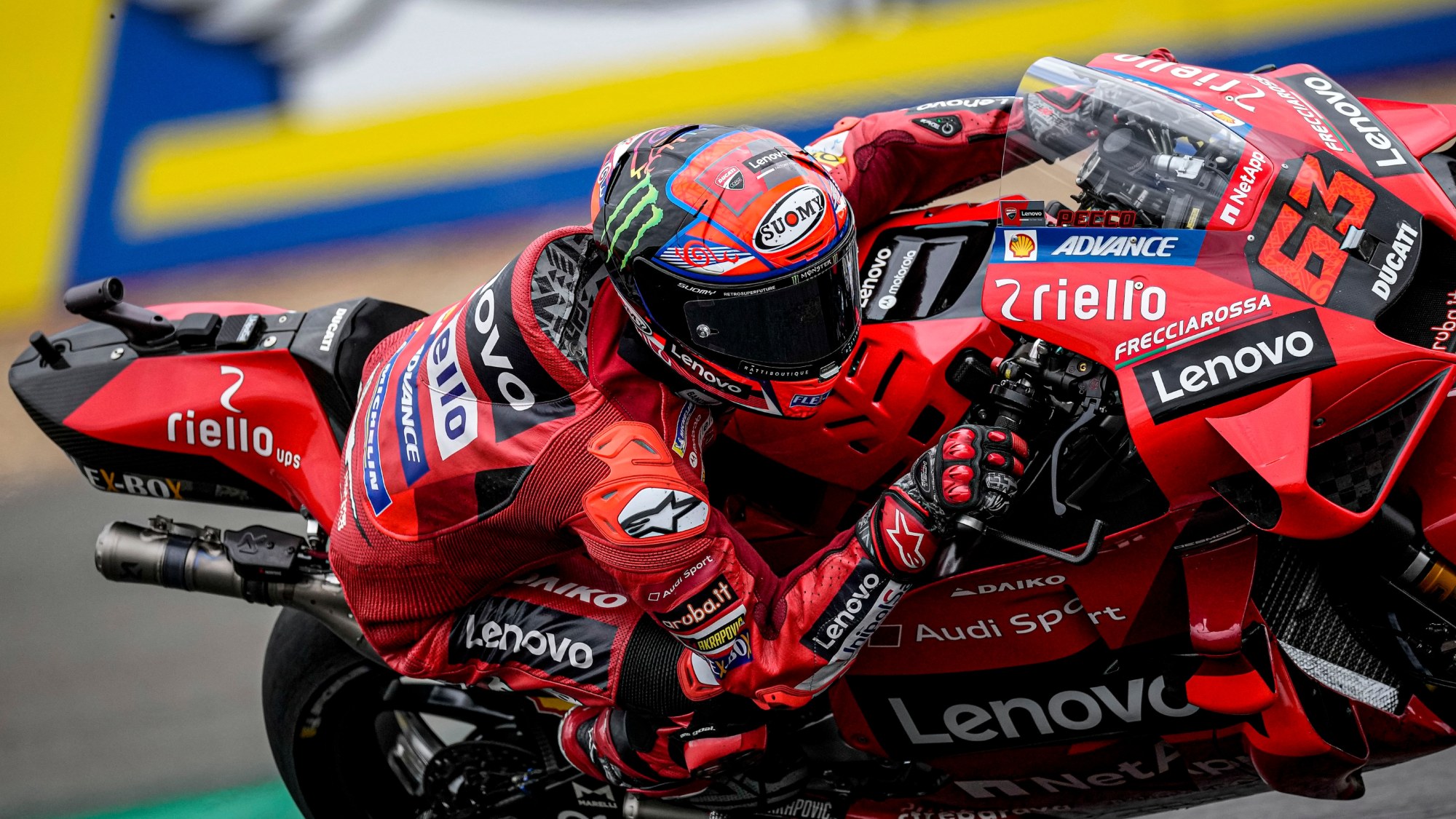 Bagnaia didn’t get any help from the Michelin man on Sunday: from front row to 14th

“I think in a championship like this, at the top of motorcycling, that all the parts on the motorcycle but must be at the top level,” said Bagnaia after the race. “We must speak with Michelin to understand what is going wrong.”

So what is going wrong?

Michelin has been MotoGP’s spec supplier since 2016, taking over from Bridgestone, who did the job from 2009. It’s always been difficult to produce 100% consistent tyres, because tyres are partly made from organic material and they’re mixed and baked, a bit like a cake. But most teams say the Michelin situation has been getting worse. 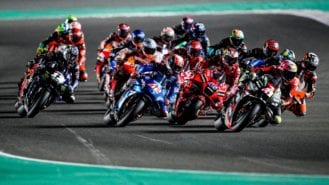 During the Silverstone weekend too many riders had tyres that didn’t work as expected – Bagnaia, Jake Dixon, Jack Miller, Mir, Danilo Petrucci and Valentino Rossi. Some had them in practice – no real problem – others in qualifying or the race – big problem. Quartararo has had his share this year, but none so far in the race.

Some teams believe the problem has got worse since Covid-19 hit last year. The pandemic has had a disastrous effect on the global economy, forcing many companies to make drastic cost savings to survive.

Is this what’s happened to Michelin’s MotoGP programme – has a Michelin bean counter slashed its MotoGP budget? We obviously don’t know the truth but this might explain the apparent lapse in quality control.

If the situation is as bad as riders and teams suggest then it’s not acceptable. Organising a world championship in which factories spend many tens of millions of Euros per season shouldn’t be decided by the luck of the draw.

If there is a budget consideration to be addressed then Dorna need to get involved, because MotoGP is Dorna’s championship and the company needs the racing to be reliably entertaining, without some of the major players falling by the wayside simply because they get an iffy tyre or two.