Suzuki’s MotoGP effort seemed to go backwards last year, so what must the factory do to close the gap to the front-runners? 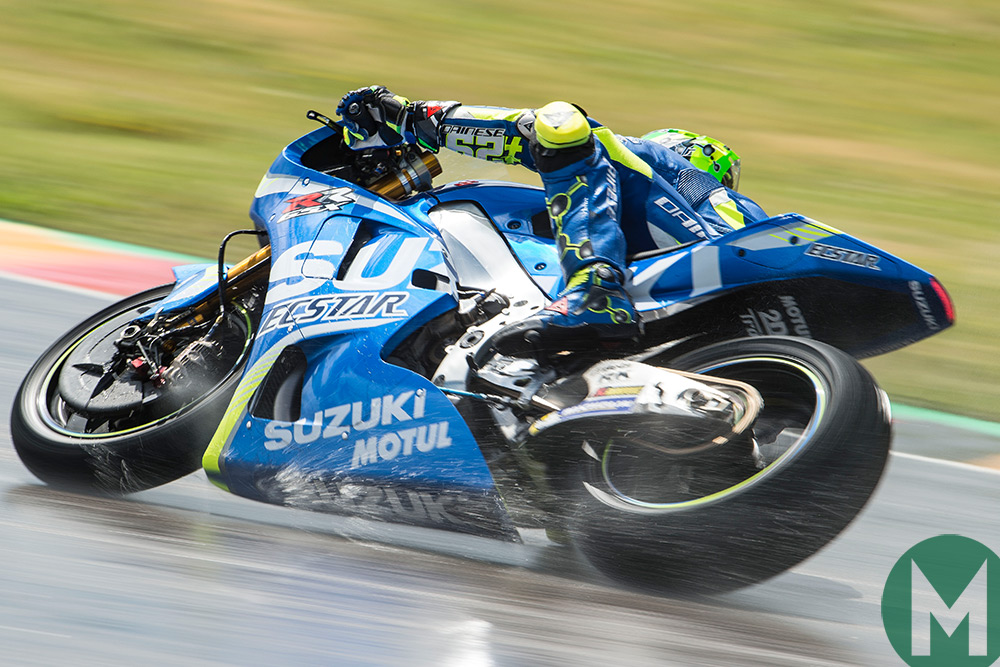 Suzuki has a lot to do in 2018, mostly to erase the memory of a gloomy 2017. Any factory team fighting back from difficult times is under a lot of pressure; but probably none more so than Suzuki, where the factory management has never seemed that dedicated to Grand Prix racing. Unlike Honda and Yamaha, Suzuki has drifted in and out of the premier-class over the past few decades, so this year Andrea Iannone and Álex Rins need some good results to keep the Suzuki Motor Corporation signing off budgets.

Suzuki returned to MotoGP in 2015 after a three-year absence and scored its first-ever dry-weather MotoGP victory in 2016. The all-new GSX-RR was a superb motorcycle: rider-friendly, fine-handling; all it needed was more grunt and fully sorted electronics.

During 2016 Maverick Viñales scored a total of four podiums, while Aleix Espargaró was fast but wayward. When Viñales defected to Yamaha, Suzuki decided to jettison Espargaró, which took them into 2017 with a risky all-new rider line-up: one rookie and one Maniac.

“We are always working to improve our bike, but maybe sometimes we go in the wrong way,” admits Suzuki’s MotoGP technical manager Ken Kawauchi. “Last year some parts of the bike did improve, but some parts were worse compared to 2016. At some tracks the bike worked well, at other tracks it was much worse.”

Suzuki has a huge gap to close, so which areas of performance are its main focus?

The riders certainly need some work. Rins had a torrid rookie year in MotoGP, dealing with injuries and finally coming good in the final few races, but he still has a lot to learn. And then there’s Iannone, the self-styled Maniac. All top racers need to be scientists as well as warriors. Back in the 1960s Mike Hailwood was proudly technophobic and able to win nine world championships, but that’s not possible anymore. Iannone needs to work on his mentality – introducing more science to his approach and calming his temperament.

Kawauchi believes Iannone and Rins will come good. “Last season Iannone had to learn the Suzuki and also we had to learn about Iannone, so it takes time,” he says. “Finally, after half the season, Iannone seemed better. Rins was injured in Texas and wasn’t really fit until after the midseason break. From Brno he kept building and getting better.

Suzuki’s engineers need to make the GSX-RR steer better and find more grip on corner exits; in other words, the same goals as most MotoGP teams. Over the past year or so Suzuki has played around with crankshaft mass. Last season they increased the weight of the crank to improve mechanical grip, but they went too far and spoiled the turning, which can also have a negative effect on corner-exit traction, because if the rider can’t get the bike turned in the middle of the corner, he will start accelerating while near the edge of the tyre, where the contact patch is smaller, so the tyre will break traction and start to spin.

“In 2016 we struggled a lot with traction,” adds Kawauchi. “So our 2017 aim was better traction, which we achieved in some places, but at some tracks we lost braking and turning performance, because we had shifted the balance towards traction.”

Kawauchi believes that his engineers have now found the right compromise on crankshaft mass. The team tested a prototype 2018 engine at Aragon, following last September’s Aragon GP, which the riders loved; due to engine regulations, they were unable to use the engine at the final races.

“During the Aragon test we combined the best points of our 2016 and ’17 bikes,” Kawauchi explains. “We used a prototype ’18 engine in a revised ’17 chassis, with different stiffness. Our riders were very happy with this combination. The ’16 engine was made for more turning, the ’17 engine for more traction, for ’18 it’s in the middle!”

Although Suzuki was unable to use its new engine at the Japanese, Australian, Malaysian and Valencia GPs, it did use those revised chassis parts, which explains why the factory’s results improved significantly at the end of the season.

Suzuki’s other main concerns are unlocking the full potential of Dorna’s Magneti Marelli electronics and getting a better handle on tyre choice.

“Our electronics are not at the same level of some of the other factories,” says Kawauchi.

When I ask Kawauchi if he has tried headhunting a software boffin from Magneti Marelli, he chuckles and says, “If you find a good guy, please can you introduce me?”

Tyre choice is now more important than ever, but Suzuki has yet to perfect the art of dialling its bikes into the Michelins and then choosing the best tyres for the race. Tyre choice was relatively simple during the Bridgestone era, because there were only two rears from which to choose and usually it was obvious which tyre would be the best race tyre. Now teams have a choice of three tyres, with each tyre offering a narrow window of performance, so it’s a much trickier job to choose the right tyre for each rider and machine.

“The Michelins are very high-performance tyres, but making the right choice is difficult,” affirms Kawauchi. “We think we have already found something to help in this area.”

There is a silver lining to the dark cloud of Suzuki’s 2017 season: the factory’s lack of results returns it to Dorna’s special-measures status, so the team will be allowed various concessions that should help close the gap on the front-runners. This is all part of Dorna’s plan to have all the factories on a similar level, to create better racing.

During 2018 Suzuki will be allowed nine engines for each rider, instead of the usual five, and the factory will be able to go testing more than its rivals.

Suzuki engineers have surely built on the improvements made at the last four races of 2017, but it’s never easy trying to catch up, because whenever the stragglers find a few more tenths, the front-runners usually do the same.