A faster motorcycle, a more focused mind and a better atmosphere in the Yamaha garage. Could this be the year Rossi wins his tenth world title? 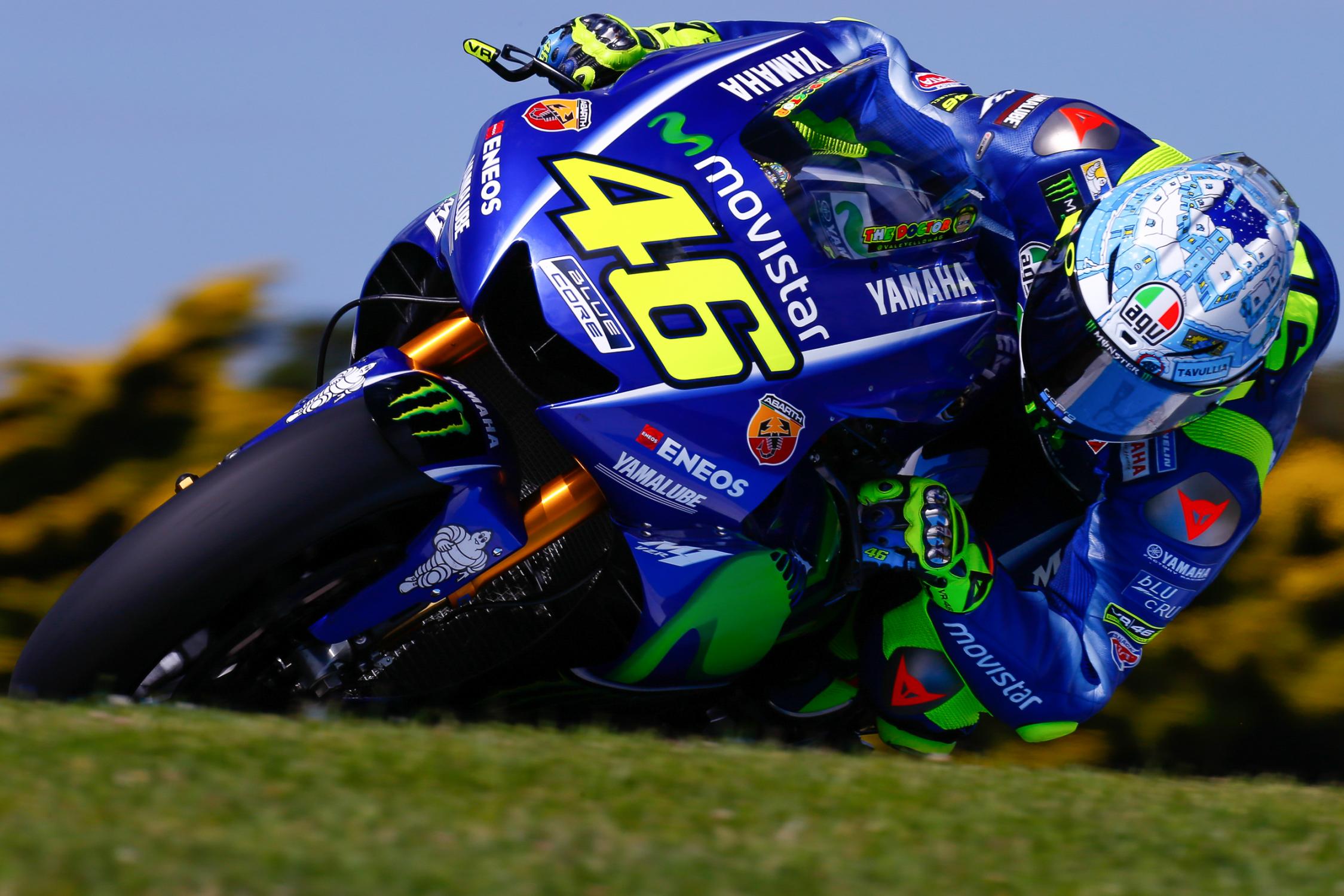 Last May I wrote a ridiculously premature story on this website, headlined: could 2017 be Rossi’s year?

The premise was straightforward. Jorge Lorenzo had already signed for Ducati, so I suggested that “the Desmosedici will do what he wants at some tracks but not at others”. Maverick Viñales looked set to take over Lorenzo’s user-friendly Yamaha, “but at some tracks he won’t have the experience of the bike to nail the set-up to the nth degree, without which he won’t win the title”. And Honda needed to build Marc Márquez a bike “that will allow him to do what he did in 2014”, when he walked the title, winning ten consecutive races.

In other words, if Lorenzo, Viñales and Márquez aren’t at 100 per cent, then Rossi could win the 2017 title because he alone will have a bike that “he probably knows as well as he knows his mum and dad”.

I never usually make predictions, because what’s the point of trying to predict what you don’t want to be predictable? But against the odds the situation right now seems the same as it was nine months ago.

There is one difference. Tomorrow Rossi will celebrate his 38th birthday during preseason testing at Phillip Island. Which will make him literally old enough to be his team-mate’s father. Viñales was born in January 1995, when Rossi was preparing for his debut international season in the 125cc European Championship. Read that again and let it sink in.

Twenty-two years later, Rossi still wants to win as much as ever. During the recent Sepang tests I bumped into Loris Capirossi (former 125 and 250cc world champion and Dorna’s new Race Direction representative) and we got to talking about the nine-time world champion.

“I still don’t understand why someone of his age is still fighting with the young riders – I don’t know where he finds the motivation,” said Capirossi, who must have some idea because he’s the only other rider who’s ridden more than 300 GP races. “Many times when I talk with him, I say Valentino, what you do? Why?”

Of that there is no doubt. But can Rossi really challenge the young guns once again? I’m not sure he can, but it’s impossible to count him out because his capabilities appear to be boundless. He has already gone way, way beyond what is normal for even the toughest competitors in one of the world’s nastiest sports, so normal people like you and me have no reference as to what he can and cannot do.

At Sepang Rossi seemed very happy with the 2017 YZR-M1. During 2016 he sometimes suffered a disastrous lack of front or rear grip. Already it seems like these problems have been fixed.

Michelin have a new front slick, which was already used by most of the grid during last year’s season-ending Valencia GP. The slightly larger profile provides a fatter contact patch at maximum lean for improved edge grip, especially in cooler temperatures, which is when Rossi really suffered last season, so the new tyre should reduce his disadvantage to Márquez. 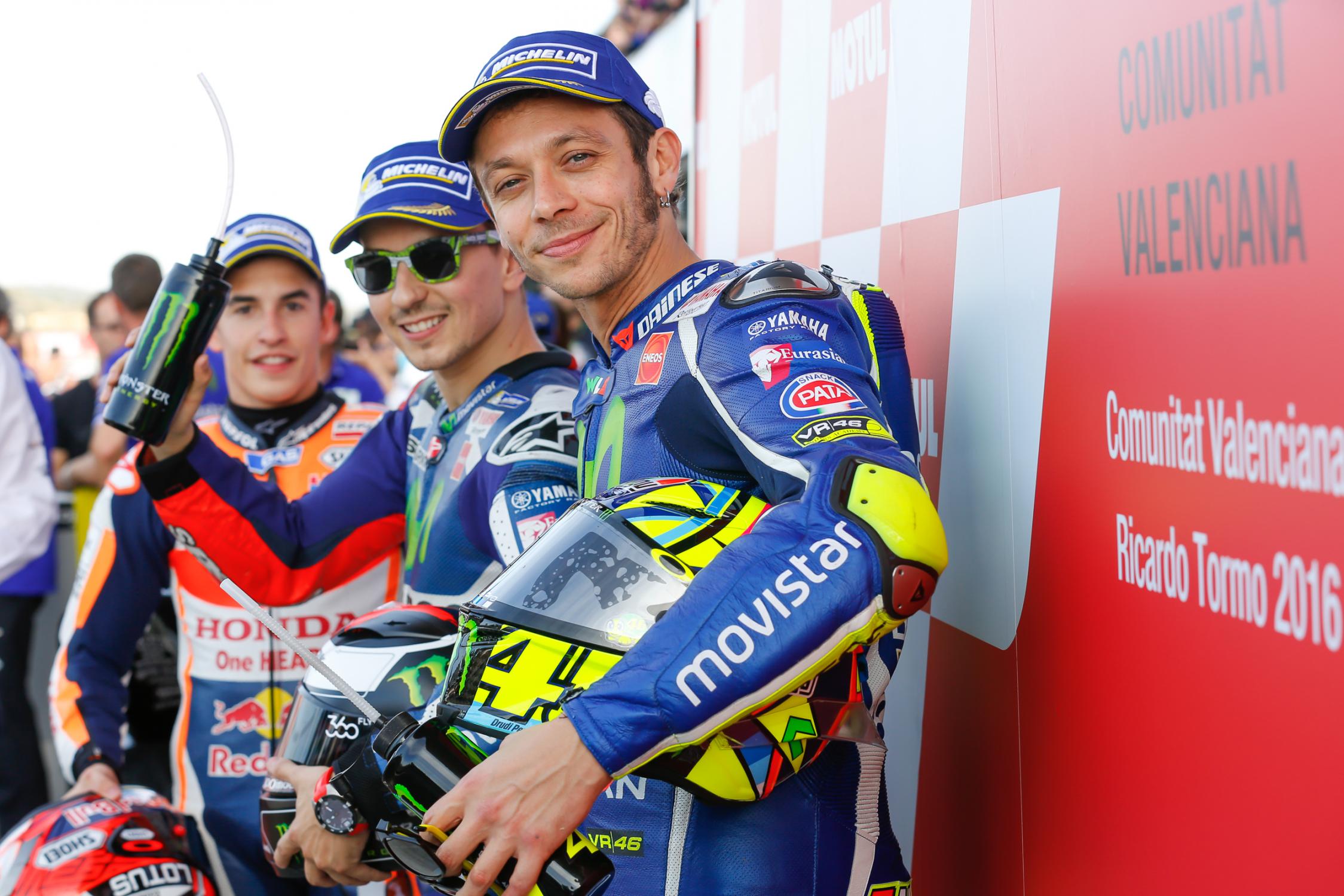 Yamaha provided its factory riders with a revised frame at Sepang, designed to reduce wheelspin during the later stages of races, a problem which often gave Rossi no chance to go after Márquez, whose great strength was his pace in the final laps. Could Yamaha’s new tyre-friendly frame reduce another disadvantage to the reigning world champion? Rossi certainly seems to think so.

“The big problem last year was that we stressed the rear tyre too much, so we suffered a lot in the last laps. We have worked a lot on this. The new frame makes the bike more agile and stresses the tyres less.

“I’m happy, the bike is good and I feel good. The bike is also very beautiful and on the straights it’s not so bad, so we have good potential.”

His reference to the beauty of his M1 is significant because there’s no greater aesthete in bike racing than Rossi. This is a man who needs more than pure performance from his motorcycle – he needs it to look right as well. Last year, when many riders protested against winglets because they believed them to be dangerous, Rossi’s main complaint was that they looked horrible. He saw winglets as an affront to the art of motorcycling, because he believes a motorcycle should be a thing of beauty.

He has always been like this, right back to his younger days when he was obsessed with Japanese graphics and insisted on applying every sticker to his race bikes.

“Even then Valentino was Valentino,” recalls Giampiero Sacchi, the man who gave Rossi his first GP ride in 1996. “I’d never seen a rider who wanted to do things like fix all the stickers to his bike, he’s always been very careful with the details.” 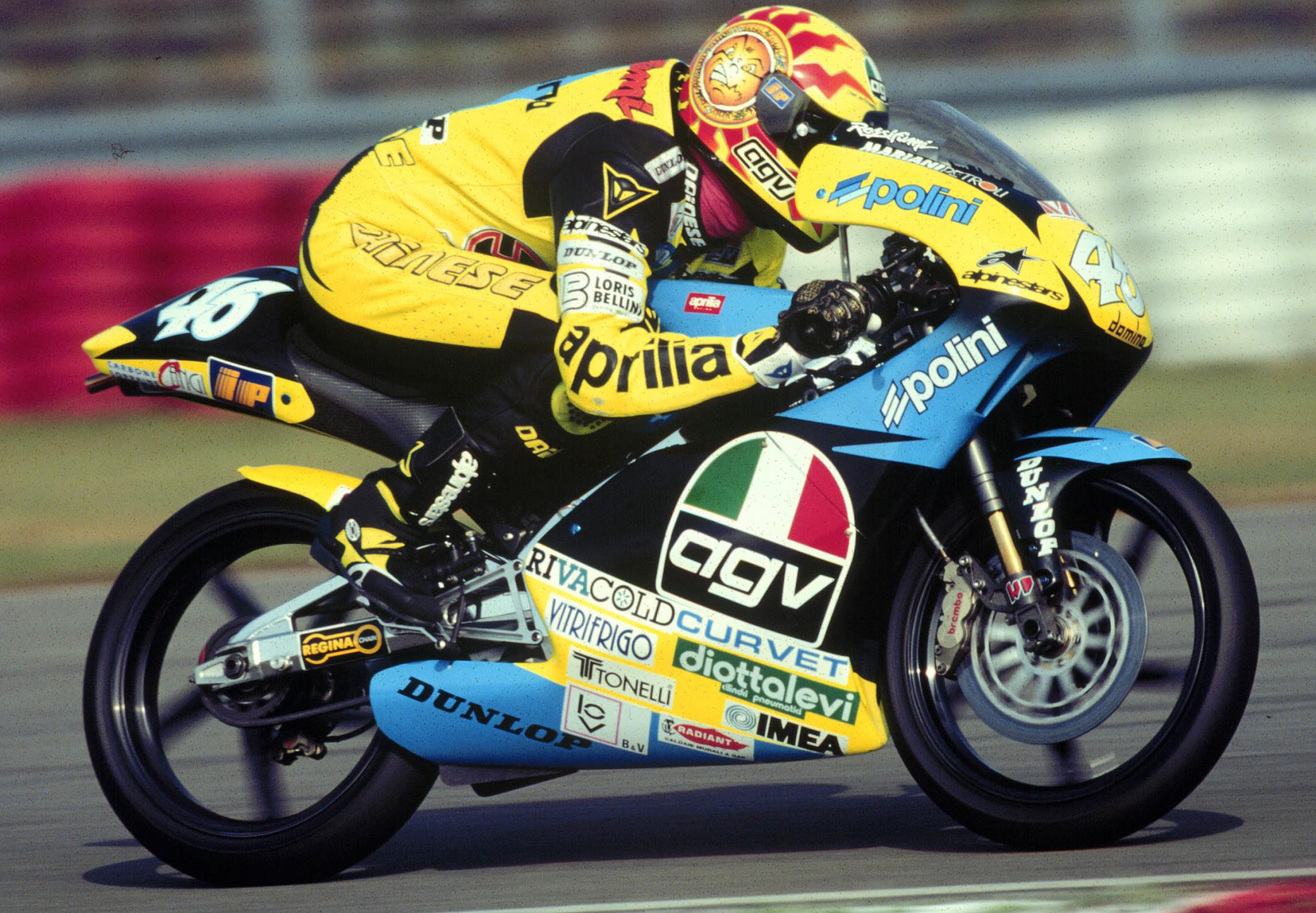 Rossi continued to sticker his bikes well into his premier class career and his good taste is there for all to see in his VR46 clothing range. His design team is so good that they also create apparel for rivals like Viñales, Cal Crutchlow and Dani Pedrosa. But no longer for Márquez.

Obviously, Márquez won’t be the only rider Rossi needs to worry about this year. “I’m sure Lorenzo will be ready to win in Qatar,” he said at Sepang. But like most of us, he’s probably less convinced of the Ducati’s pace from one track to the next.

Which leaves only one other serious title candidate (we’ll leave dark horse Andrea Iannone for another time): Rossi’s 22-year-old team-mate. From the moment Viñales got on a Moto2 bike there was no doubt that he was the real deal, just like Márquez. But I now think he’s more likely to nail his M1’s set-up to the nth degree at each track than I did last May.

At that time we didn’t know whether Lorenzo’s long-time crew chief Ramon Forcada would follow his rider to Ducati or remain at Yamaha. His decision to stay rather than go was a huge boost for Viñales, because no one except Rossi knows the M1 better, so Forcada’s knowledge of the bike will compensate for Viñales’ lack of knowledge. Forcada has been around forever. He started out working for genius Ossa two-stroke designer Eduardo Giro and got his first Grand Prix job in 1989, doing dyno tests on Alex Crivillé’s Cobas Rotax 125. You could say he’s the Spanish Jeremy Burgess – he stands there in pit lane looking like a wise owl, peeping over the top of his spectacles.

Although Viñales will give Rossi plenty of trouble, his arrival at Yamaha is a boost for the factory, because his riding technique is more like Rossi’s than Lorenzo’s. In theory, this should help the Movistar team find better settings more quickly, a vital part of winning in MotoGP. 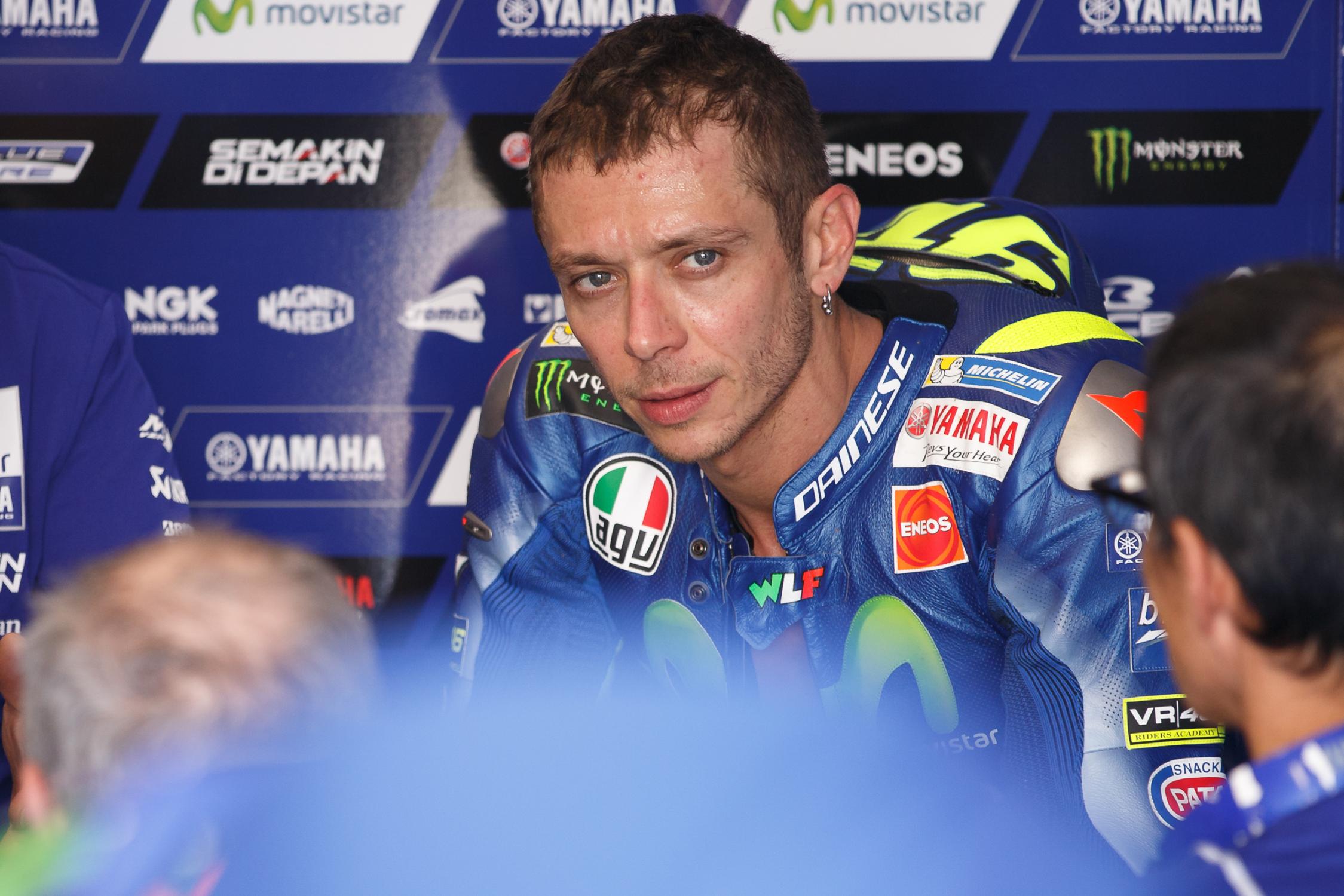 “The way Maverick brakes and enters corners is more similar to me compared to Lorenzo, whose riding style is very particular,” adds Rossi. “Maverick rides very well, especially in fast corners. He’s also strong on braking and he picks up the bike the same way as me.”

Rossi has something else on his side that he didn’t have this time last year. He started 2016 still raging from the alleged plot of October/November 2015. Anger can be an energy for a rider, but, like anything, you can have too much. Last year Rossi was still hurting inside and was too obsessed with revenge, which hurt his focus.

“What happened at the end of 2015 will always remain, but time is the best medicine,” he says. “It’s important to stay concentrated, quiet and serene, so I try to stay more relaxed and stay more concentrated on my work.”

Who knows, that could make all the difference.