The 2016 season has only just started, but 2017 is already looking good for VR

So silly season is over. And it’s not even June. Now that all the major title players (with one exception) have inked their contracts for next year, it seems like the right time to write a 2017 preview. In May 2016.

Next year MotoGP’s balance of power will shift more dramatically than it has done since the arrival of Marc Marquez four years ago. What this means is that 2017 could be Valentino Rossi’s best shot at the title since his 2010 effort went west at Mugello; though obviously I’m not suggesting he’s already out of the 2016 hunt. 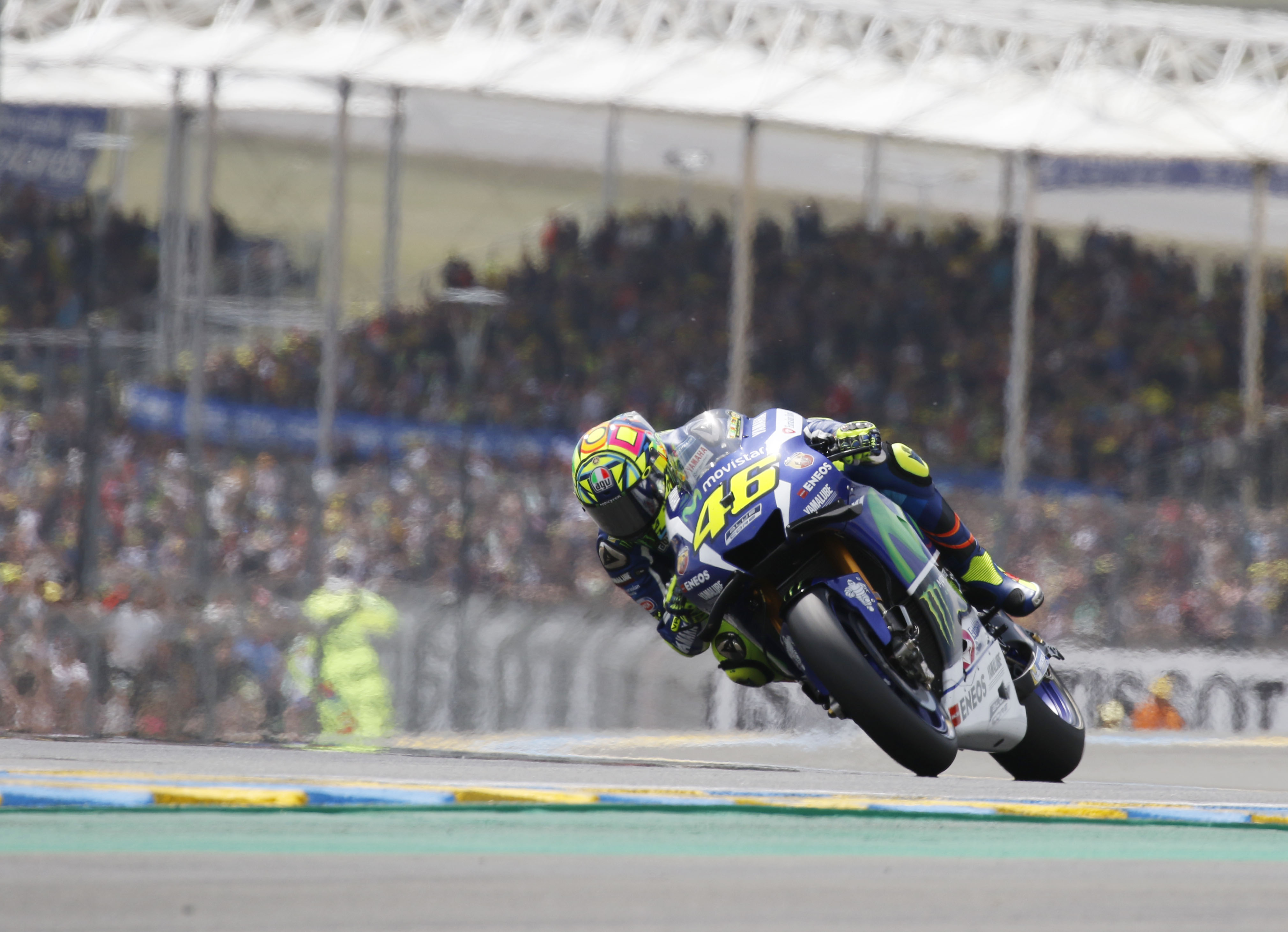 Jorge Lorenzo’s move to Ducati is the biggest factor in the 2017 scenario. Lorenzo’s sweet, neutral riding technique goes together with the sweet, neutral handling of Yamaha’s M1 like fish goes with chips, so it’s a huge deal that the reigning champion and current championship leader won’t be riding the bike that has brought him so much success.

Lorenzo will surely win races on the Ducati, but even with his former Aprilia guru Gigi Dall’Igna and Casey Stoner at his side, the Desmosedici will do what he wants at some tracks but not at others. The Italian V4 is more of a corner-speed machine than it’s ever been – which will suit Lorenzo – but it’s still a bit hit and miss. Witness Jerez where the best Ducati rider’s race pace was 0.99 seconds a lap slower than Rossi’s winning pace. Thus Lorenzo will most likely struggle to reproduce the consistency that’s been a vital cornerstone to his three titles.

Maverick Viñales inherits Lorenzo’s berth on the rider-friendly Yamaha and will surely win races on the M1, which behaves similarly to the Suzuki GSX-RR he rides now. But at some tracks he won’t have the experience of the ‘bike to nail the set-up to the nth degree, without which he won’t win.

He will be 38 years old next year, but he still runs on the elixir of youth, like a petrol-head Peter Pan. His long-time mechanic Alex Briggs (who’s been with VR since November 1999) believes Rossi has discovered “the fountain of youth by racing all the kids at his ranch.”

Rossi knows it never gets easier: each year he must train harder to keep his body firing on all cylinders. He’s also hired Luca Cadalora to help him eke a few extra thousandths out of each lap and he has split with his long-time girlfriend to focus entirely on the one thing he wants more than anything else: a 10th world title.

If Lorenzo will struggle to prevent Rossi from fulfilling his dream next year, who might? Marquez, of course.

As much as the Mugello crowd wanted a Rossi win on Sunday, they were too much entertained by the breathtaking Lorenzo/Marquez duel to complain too loudly. Inevitably, there were boos and whistles but anyone who wasn’t impressed by Marquez’s last-lap attack doesn’t have a racing heart.

There is no doubt Marquez has towering mountains of talent and raging rivers of determination. What he needs from Honda – which is surely where he will stay in 2017 – is a ‘bike that will allow him to do what he did in 2014.

No one except HRC’s Shuhei Nakamoto and his engineers quite knows what the RCV is missing. Last year the engine wasn’t quite right and this year it isn’t quite right, but that’s not the whole story.

Marquez lost Sunday’s race in the final metres, possibly because his RCV lifted its front wheel as he crested the brow before the finish line. The anti-wheelie control of this year’s unified software is the most basic of all the rider-control functions, possibly because it’s not considered a safety issue like traction control, wheelie control and torque management. HRC – the only factory entirely new to Magneti Marelli kit – is taking longer than the others to get its numbers right in the new software. So perhaps the anti-wheelie control kicked in too much – the software analyses all factors of machine function every millisecond or so – and demanded too much of a reduction in torque delivery, which closed the throttle butterflies a fraction, losing Marquez vital speed. 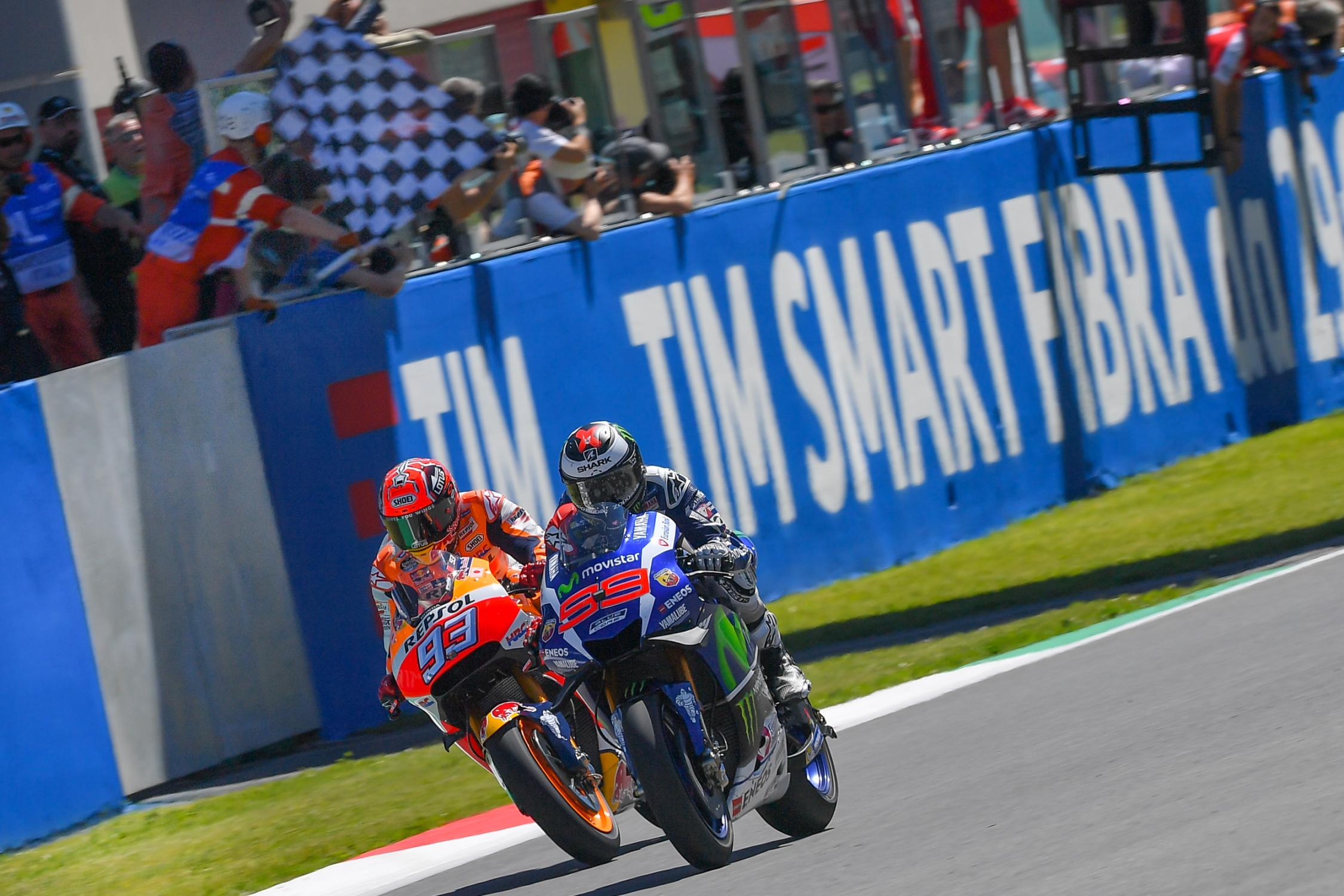 Perhaps a bigger set of wings might have fixed that wheelie before the electronics cut in, but the downforce created by wings increases drag, so Marquez used Honda’s smallest wings at Mugello to save top speed.

Honda’s RCV engine is probably the most aggressive of them all and that’s a wonderful thing, at least for us, watching from the sidelines. There is no sight – or sound – better in MotoGP than Marquez pinning the throttle and riding that wailing bucking bronco out of a corner. And there’s no better illustration of that than the young Spaniard grabbing a big handful as he sped out of the Biondetti esses for the last time on Sunday, his RCV spinning its rear tyre, setting the suspension all aquiver and then rocketing past Lorenzo.

Marquez is just as spectacular into corners: he tells us that when he’s fully on the brakes in a straight line he likes to lock the rear tyre so he doesn’t lose the front! That is also a wonderful thing to see.

From the Archive: Marc Marquez – all arms and elbows

What will Honda do for 2017? At the moment it is the only factory that doesn’t run a big-bang-style firing configuration, which is why the RCV has that spine-chilling wail, while all the other ‘bikes drone out of corners like mega-quick streetbikes.

Big-bang engines create friendlier power and better traction, usually at the cost of peak horsepower. HRC hates copying, but if it does go with the others and build a big-bang RCV it won’t be copying anyone, because it was HRC who started the whole big-bang concept in 1992, with the NSR500 two-stroke.

If HRC does tame its engine for 2017, Rossi will have a huge fight on his hands and I will miss the sight and sound of Marquez riding the beast.