Jorge Lorenzo’s decision to retire from MotoGP is entirely understandable. He experienced The Moment that makes many racers decide to quit while they’re still ahead 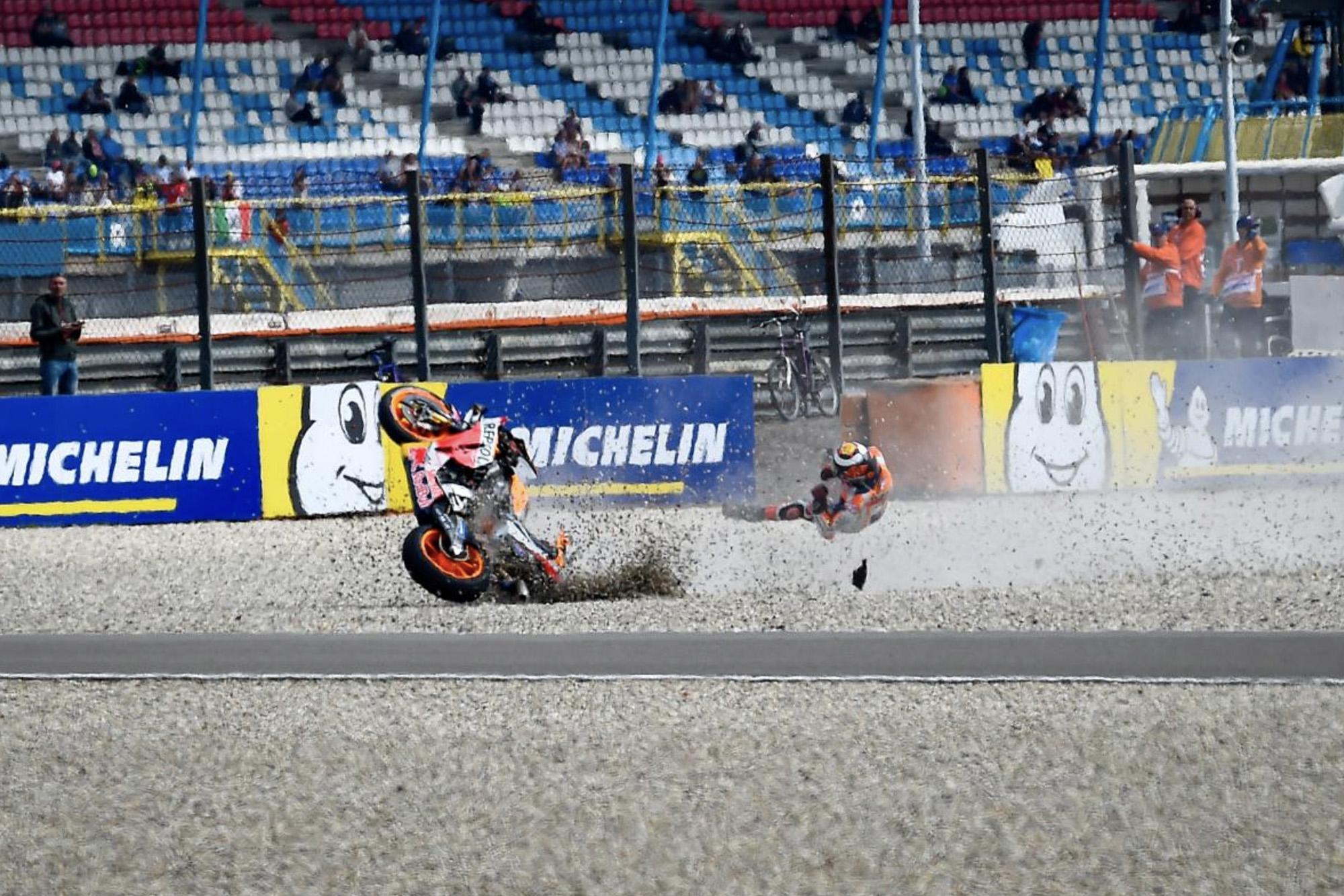 The crash that led to Lorenzo’s retirement Photo: MotoGP

Many racers go through The Moment that’s the beginning of the end of their racing careers. Not all, of course. Some just drift into retirement, having had enough of racing and everything that goes with it.

But Jorge Lorenzo definitely went through The Moment, which we can pinpoint to 10:34am on Friday, June 28.

The three-time world champion had just received his latest updates from HRC – knee pads moulded into the fairing of his Repsol Honda RC213V to give him more support during heavy braking and hopefully make him more competitive.

He was on his third run in Dutch TT FP1 when he lost the front going into Turn Seven. He wasn’t the only faller that morning – the asphalt was cold and also caught out Danilo Petrucci, Aleix Espargaró and Takaaki Nakagami.

The crash itself wasn’t that bad, but Lorenzo got flipped in the gravel trap – while travelling at perhaps 80mph/130km/h – and when that happens the rider is in the lap of the gods. His final cartwheel and the subsequent impact did the damage, fracturing two vertebrae.

The angle of his head, neck and back when he landed were similar to Wayne Rainey’s when the three-times 500cc world champion severed his spine at Misano in 1993. No wonder he’s been worried. 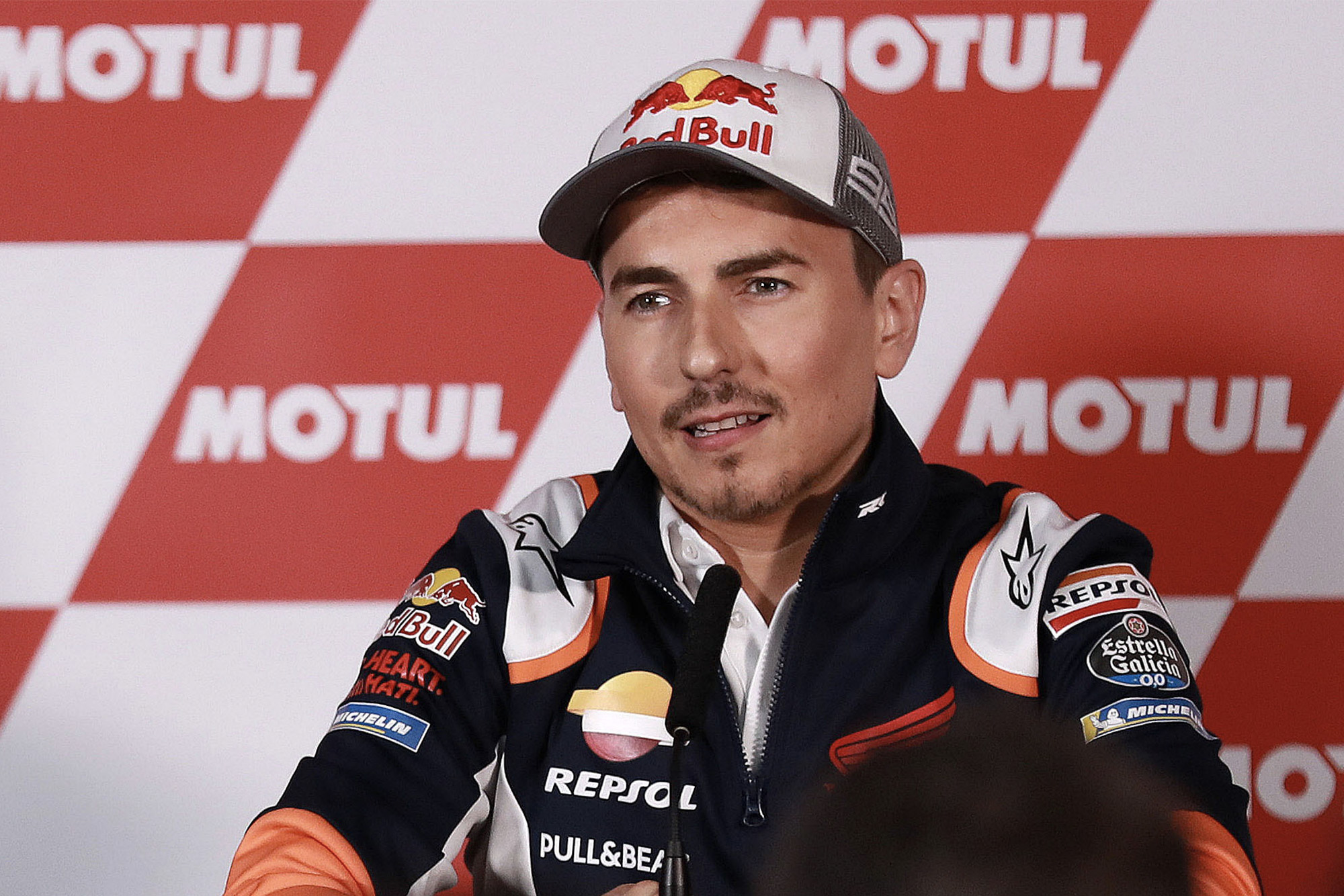 “At the start of the year I never lost hope, I kept working with the team, thinking that it was probably a matter of time before everything was in the right place,” said Lorenzo, announcing his retirement at Valencia.

“Then when I was starting to see some light at the end of the tunnel I had a nasty crash in the Montmelo [Barcelona] tests, then some days later I crashed again at Assen.

“I have to admit that when I was rolling through the gravel and when I stood up I thought to myself, ‘ok Jorge, is this really worth it, after what I’ve achieved?

“‘I’m done with it; I don’t want to race anymore’. But then I got home and decided to give it a try again. But the truth is from that moment the hill became so high for me that I wasn’t able to find the motivation to keep trying to climb this mountain.”

Most racers laugh in the face of danger. They think that death and serious injury are things that happen to the other guy. And then, one day, everything changes. A switch gets flicked in their brains and the world suddenly looks different.

For some riders, like Lorenzo, it’s one big moment that tells them they are not immortal. For others, it’s two or three moments. 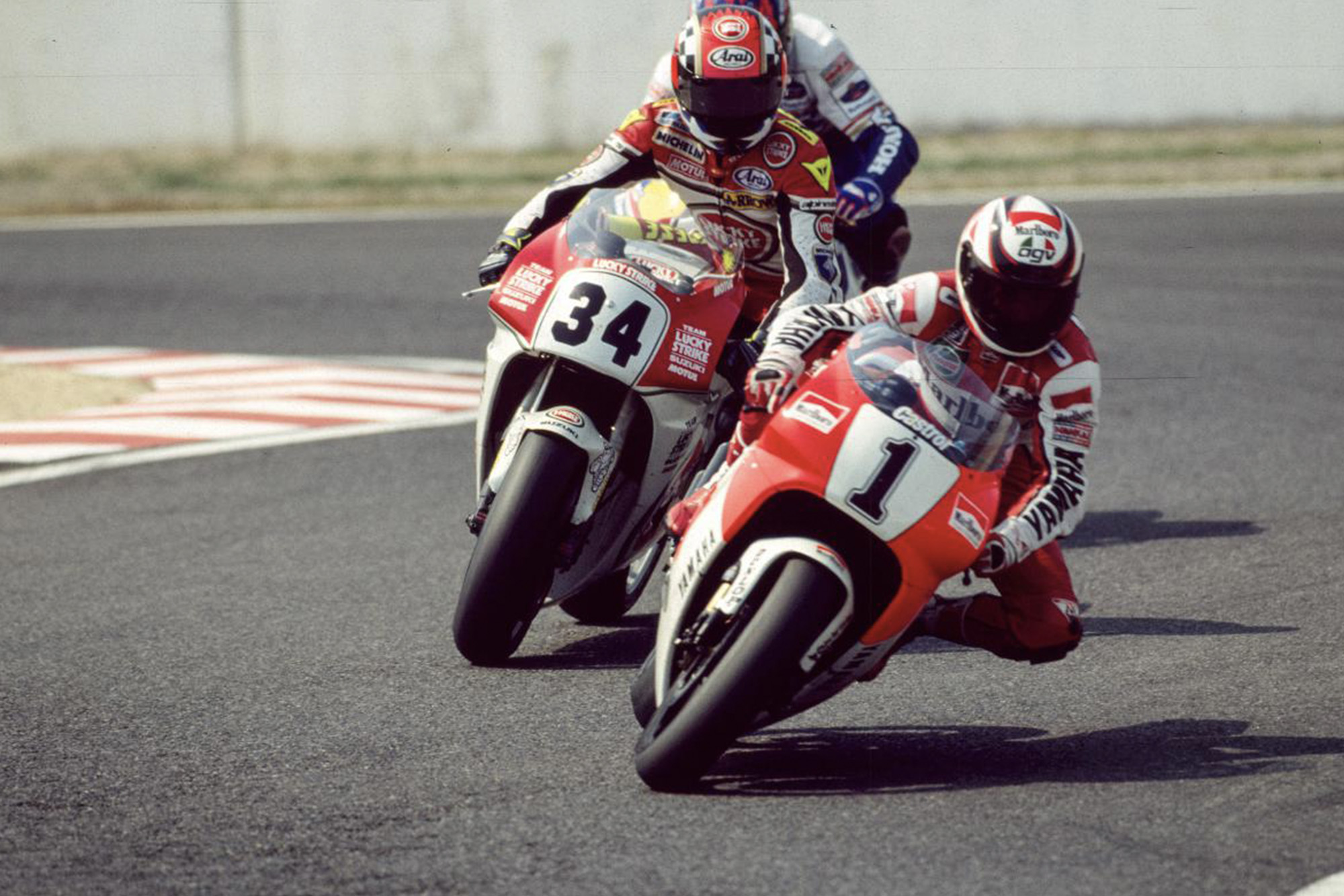 Rainey’s Misano accident didn’t only end his career. It was also the beginning of the end of arch-rival Kevin Schwantz’s, ironically at the very moment he became world champion. Schwantz considered quitting there and then but finally decided to continue.

His second big wake-up call came 18 months later during 1995 pre-season testing at Phillip Island. Three months after that he announced his retirement.

“I lost the front going into Hayshed, tumbled off the track, came to a stop and rolled over. Then KERRRPANNG! the bike landed two feet away from me. I was like: woah, what if I’d rolled over that way instead of this way.

“I was like: what are you f*****’ doing? So it took me a year and a half to make myself realise that I needed to step away.”

GP winner and LCR Honda team owner Lucio Cecchinello went through a similar process, commencing at Valencia in November 2002 and ending at Estoril in September 2003.

“When I crashed at Valencia I landed on my head and compressed my spine,” recalls the Italian.

“I felt a crack, and believe me, in the few seconds between that and when I stopped moving, so I could see if I could move my legs, I was desperately afraid that I’d broken my spine. 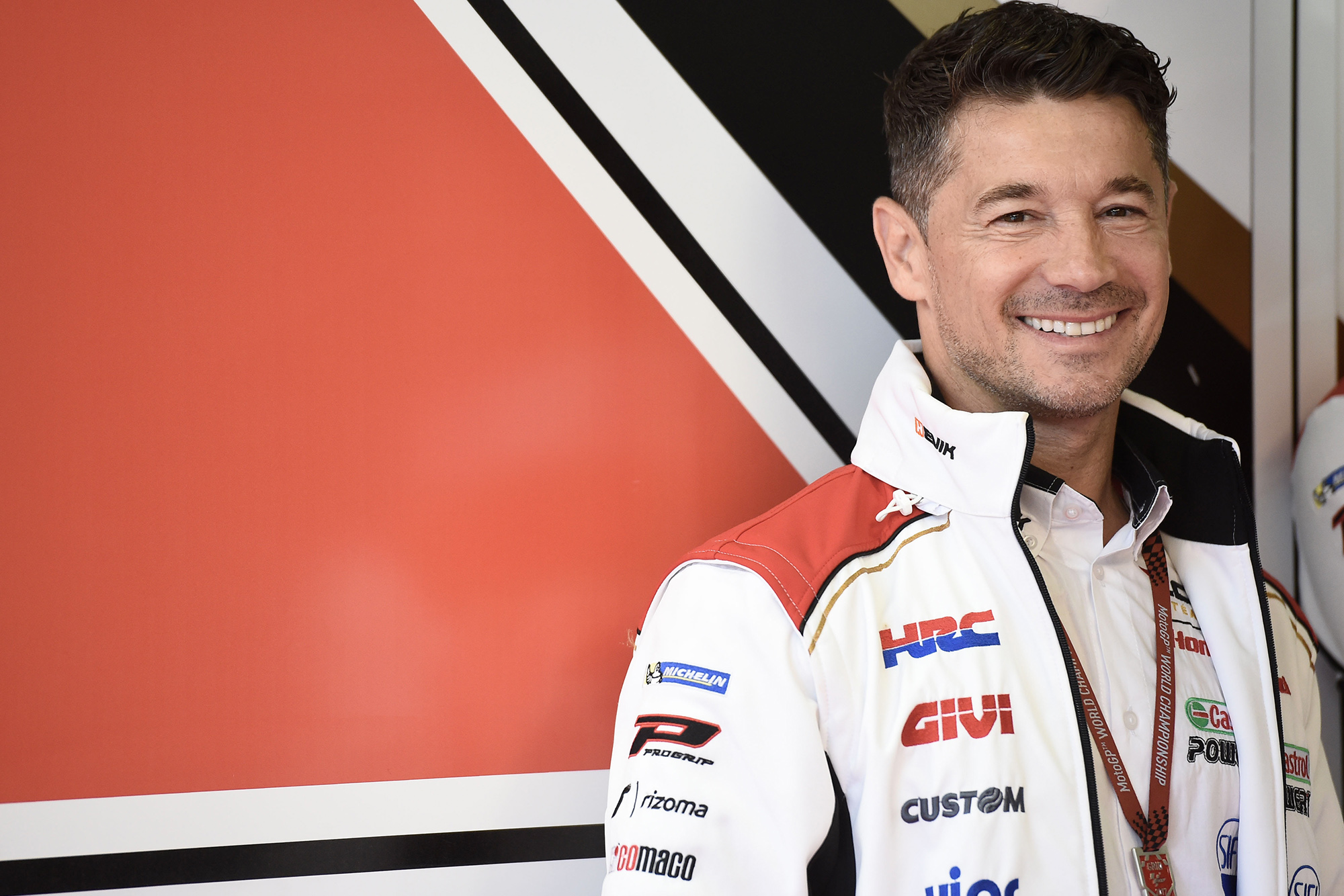 Cecchinello’s second big moment happened at Suzuka the following spring on the same weekend that Daijiro Kato lost his life.

“Stefano Perugini passed me with the slipstream and touched me, so I lost control. I was going straight towards the guardrail at 240kmh [150mph] and I don’t know how I managed to stay on. On Sunday evening [MotoGP medic Dr Claudio] Costa said to me, ‘Lucio, when you get home, go to church and light a candle’.

“This disturbed me, but I won again at Jerez and Mugello and I was leading the world championship until I had back luck in several races. Finally, at Estoril I crashed and Gino Borsoi’s bike hit me in the head.

“There was a big tyre mark across my helmet visor. I thought, if his wheel had hit me in the neck it would’ve been a big problem. In that moment I was finished.”

I had several similar moments that signalled the end of my own racing career. The process started after an early morning practice session for the 1989 Isle of Man TT.

I was eating breakfast in a Douglas café when Manx Radio announced that Phil Hogg had been killed during the session. Hogg was riding the same Yamaha TZR250 two-stroke I was riding. I wondered if his crash had been caused by an engine seizure.

In the next practice session I was heading into Ramsey, flat-out in sixth gear, thinking so hard about engine carburation that I forgot about the next corner, Schoolhouse.

I threw the bike into the left-hander, expecting the worst. I got through, just, using the kerb as a berm. By the time I left the Island that year four more riders had lost their lives.

I didn’t retire there and then, but I may as well have done, because every time I had breakfast before a race I wondered whether it would be my last. Once you think like that, you’re never going to be fast enough.

I rode my final laps in anger during qualifying for the 1991 Le Mans 24 hours, partnered with Steve Hislop and Simon Buckmaster. I had big highside exiting Garage Vert and ended up in hospital. Finally, I’d had enough of the pain and suffering.

MotoGP and most forms of motorcycle racing are much safer than they used to be. But don’t ever let that fool you into thinking that riders aren’t risking their lives every time they go out on track.

Bike racing can never be anywhere near as safe as car racing, as evidenced by the sad passing of Afridza Munandar during the Malaysian GP.

I applaud Lorenzo for his decision and wish him every happiness in retirement.