There’s a theory going around that top MotoGP riders, such as Marc Márquez, must prove themselves by winning titles with different brands. And it’s nonsense… 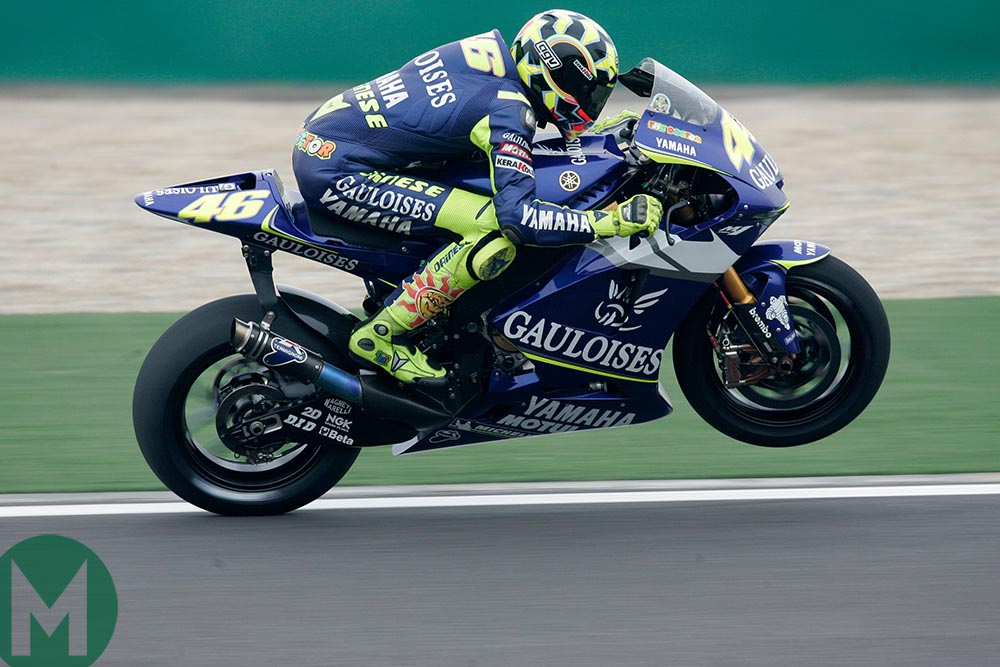 Valentino Rossi quit Honda at the end of 2003 to join Yamaha Photo: Yamaha

Marc Márquez’s current HRC contract expires on December 31, 2020. That’s 600 days away. And yet journalists are already hammering away at their keyboards, wondering aloud which brand of motorcycle he will race in 2021: will he stay at Honda or will he go somewhere else? Of course, it’s all guesswork, because no one has a clue what Márquez will do.

A lot of the speculation about the world champion’s future eddies and flows around that fashionable racing untruth: that top riders must win races and titles on different brands of bike to gold-plate their legend.

It can be challenging to switch tyre brands, but no one gets excited about who’s won titles with different tyre companies

Many of the greatest riders in history stayed loyal to one brand: Mick Doohan, ‘King’ Kenny Roberts, Wayne Rainey, Kevin Schwantz and so on. Does the fact that they didn’t switch manufacturers lessen their talent or their achievements? Of course not.

Winning on different motorcycles is an accomplishment, but it doesn’t make you a better rider. Adapting from one bike to another is just one talent in the huge array of skills possessed by fast racers. And anyway, all top riders have already proved their ability to adapt, by graduating from one category to another.

It’s also worth noting that it can be even more challenging to switch from one tyre brand to another, but no one gets excited about who’s won titles with different tyre companies. 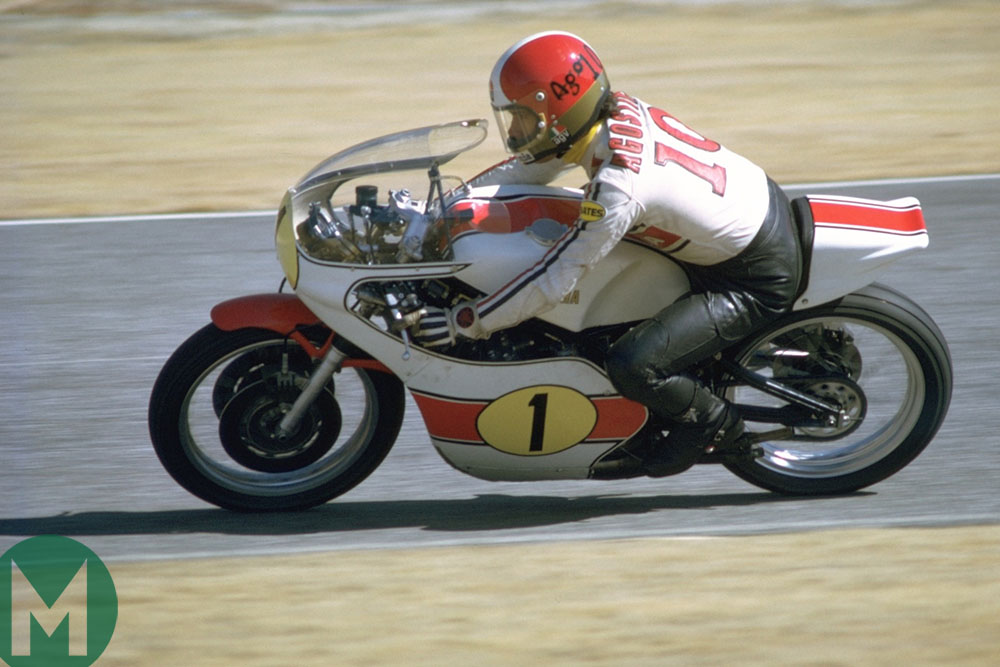 This whole idea of riders needing to win titles on different bikes to seal their status is a new relatively concept. It can be precisely dated to the winter of 2003/2004, when Valentino Rossi defected from Honda to Yamaha.

When Rossi won the 2004 MotoGP crown on a YZR-M1 he became the fourth rider to win premier-class titles on different brands, after Geoff Duke (Norton and Gilera), Giacomo Agostini (MV Agusta and Yamaha) and Eddie Lawson (Yamaha and Honda). Later Casey Stoner became the fifth (Ducati and Honda). Neither Duke, Ago, Lawson nor Stoner changed brands primarily to cement their credibility.

Of course, the deeds of Rossi and Lawson are particularly special, because they won back-to-back titles on different bikes. But adapting successfully is as much about engineers as riders. Lawson wouldn’t have won the 1989 500cc title aboard Honda’s NSR500 without Erv Kanemoto providing a unique conduit between the American and HRC. And Rossi wouldn’t have won the title (certainly so soon) without Masao Furusawa creating Yamaha’s big-bang engine and crew chief Jeremy Burgess fixing the M1’s dire chassis.

As usual, to understand the reality, you must look further back than the day before yesterday. Riders almost always switch manufacturers because of money, machinery or management, not because they want to win on different bikes. Here’s the proof…

Duke was the first premier-class world champion to switch brands. He made the move in 1953 for better machinery and better management. Duke had won the 1951 500cc title on a single-cylinder Norton, beating the much faster Gilera fours, thanks to his outstanding talent.

In 1952 he lost the title to Gilera, so when Norton managing director Gilbert Smith asked him if he would stay with the company in 1953, Duke asked when the company’s water-cooled four would be ready. Not in time for next season, replied Gilbert. [In fact the four was never completed.] Then Gilbert told Duke why he had lost the title: it wasn’t because the Norton had 25% less horsepower than the Gilera, but because Duke had been attending too many dinner-dances. So Duke travelled to Italy and signed for Giuseppe Gilera.

In 1966 Mike Hailwood left MV Agusta for Honda because he knew Count Domenico Agusta was keener on his new Italian signing Giacomo Agostini.

In 1974 Agostini finally walked out on MV because he knew he needed a two-stroke. “The two-strokes were getting faster and safer, while it was very difficult to find more horsepower with the four-stroke, so it was time to change,” he told me.

Also, Count Domenico had died, leaving the team to his dodgy nephew, Riccardo “Rocky” Agusta. Not only did the new Count and Ago dislike each other, Rocky was best mates with Ago’s arch-rival team-mate Phil Read. 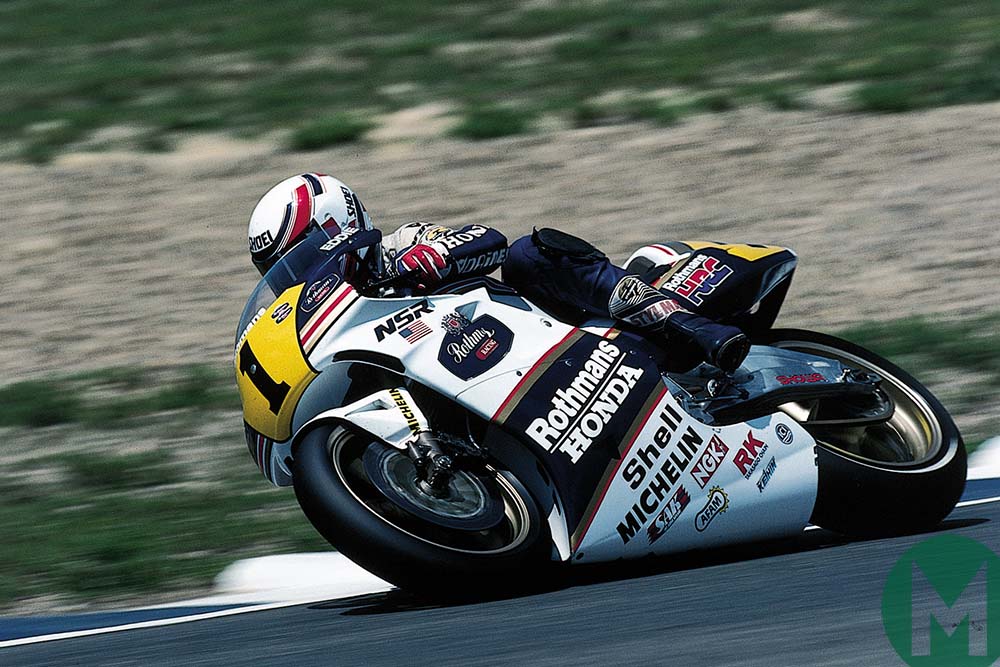 At the end of 1978 Barry Sheene finally fell out with Suzuki GB management. He called their bluff to get the deal he wanted, but it didn’t work, so he went from factory Suzuki rider to Yamaha privateer. If he had stayed a Suzuki factory rider he may have won another world title.

In 1989 Lawson ended a six-year relationship with Giacomo Agostini’s factory Marlboro Yamaha squad. “I had some problems with Ago,” Lawson recalls. “He told me he had a lot less money for 1989, so I went to Lausanne [Philip Morris HQ] and they said they’d doubled his budget. I was, like, aaah man!”

Lawson was also fed up with Yamaha, which had failed to solve a persistent carburation problem that ruined the YZR500’s power delivery. So he signed for Kanemoto’s Rothmans Honda team, taking a big pay cut along the way.

In 2003 Rossi decided to leave Honda, after winning three straight titles with the NSR500 and RC211V. The Italian fell out with Honda management, although some of the blame for that must lie with his manager Gibo Badioli, not an easy man to with whom to do business. When negotiations stumbled, Rossi decided to leave Honda, only later in the process was he attracted by the challenge of winning aboard Yamaha’s hopeless YZR-M1, because he wanted to prove that the rider is more important than the bike. 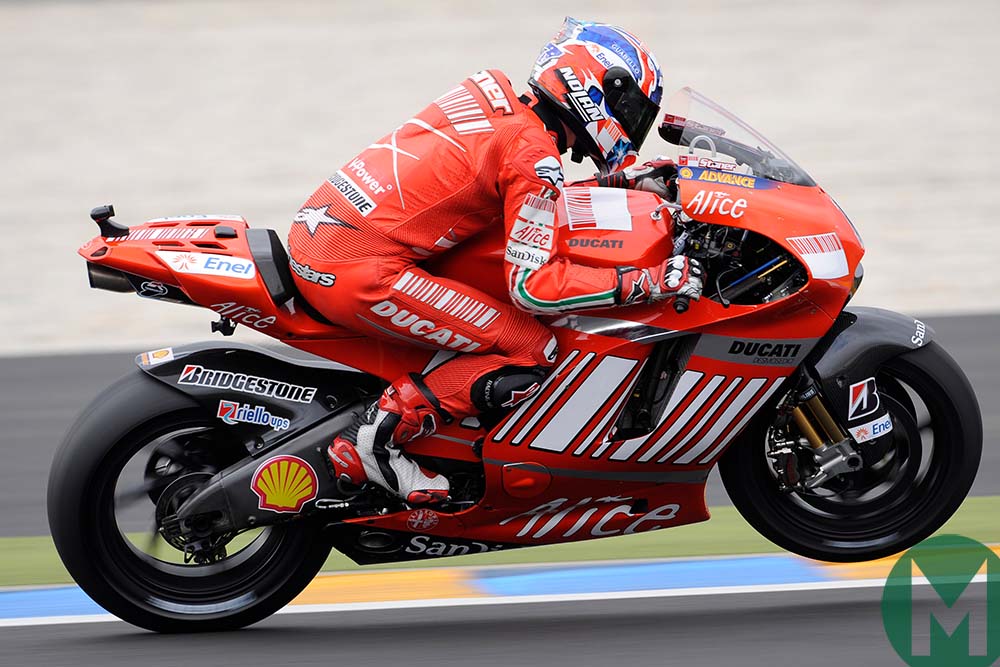 Casey Stoner defected from Ducati to Honda in 2011 Photo: Ducati

At the end of 2010 Casey Stoner quit Ducati for Honda, not for the challenge, but because he had fallen out with Ducati management. The beginning of the end came the previous summer, when Stoner missed several races due to illness triggered by undiagnosed lactose intolerance. The feisty Aussie didn’t appreciate the management’s lack of concern for his wellbeing. And he was furious when he heard that Ducati had offered Jorge Lorenzo a deal on twice the money he was earning, so when Honda came calling…

At the same time Rossi left Yamaha for Ducati, because Yamaha had decided Lorenzo was the future. Rossi never won a race, let alone a title on the Desmosedici, so does that failure negate his success on the Yamaha? Of course not. It simply confirms that the motorcycle is an important factor in the racing equation.

In 2017 Lorenzo left Yamaha and went to Ducati, because he had realised he would never escape Rossi’s shadow in the Yamaha garage. And at the end of last year he signed for Honda because Ducati management didn’t want him.

So there you have it: money, machinery or management and very, very rarely anything else.

And if you watch carefully and really study what’s going on, you can tell who’s the best rider by how they ride, not by the badge on their fuel tank.