Some say current technical regulations are unfair for bigger riders like Petrucci and Rossi, so is it time to even things up a bit? Michelin and Ducati think so 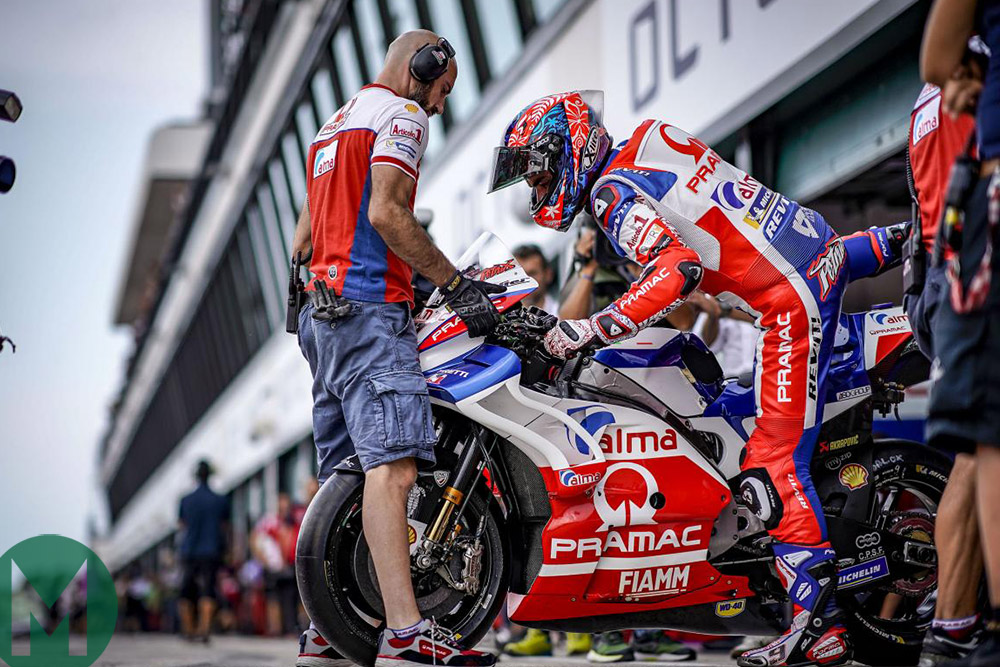 Some years ago I thought MotoGP needed a combined rider/machine minimum weight. After all, I reasoned, if Formula 1 (where the car weighs around nine times more than the driver) has a combined limit, surely it would make sense in MotoGP (where the bike is a bit more than twice the weight of the rider).

So I talked with several MotoGP engineers and technical director (now race director) Mike Webb. They were all convinced this wasn’t the way to go. They said it’s swings and roundabouts, especially in the case of soon-to-retire Dani Pedrosa whose advantages on the swings (the straights) are easily outweighed by his disadvantages on the roundabouts (the corners).

Fair enough. The engineers know a hundred times more than me about the science of bike racing, so I forgot all about it. Moto2 and Moto3 both have combined minimum weights, but they have a fraction of a MotoGP bike’s horsepower, so they are very different cases.

But now the subject is back on the agenda, because in recent years everything has been done to equalise the performance of all the bikes on the MotoGP grid: same-for all basic engine specs (four cylinders, 81mm bore), same-for-all tyres, same-for-all electronics and so on.

It might be coincidence, but statistics seem to bear this out: the average weight of the back half of the MotoGP grid is 71.4kg, against an average 68.5kg for the current top 10 and an average 66kg for the podium finishers at the last 10 races. Imagine what it’s like being Pedrosa (160cm/51kg), Danilo Petrucci (above, 181cm/78kg) or Scott Redding (185cm/78kg). And can it be mere coincidence that the giant of the grid, Redding, is to lose his ride at the same time as MotoGP’s teeniest rider Pedrosa (160cm/51kg)?

“I thought my problem was riding style,” says Petrucci. “My style isn’t perfect – there are a lot of riders better than me – but I think rider weight is very, very important.

“In corners I put more weight and more force on the rear tyre, so when there’s less grip the tyre slides and then it gets hotter, so lap by lap the tyre gets hotter and its performance drops. I don’t know how to solve this problem, but I know it’s one of the reasons why Alvaro Bautista [169 cm/58kg] has been so fast in some recent races. He is very light, so he can use a fast rhythm all through the race.

“There’s no doubt that rider weight makes a difference and maybe with the tyre question it’s worth looking at again,”

“At the start I’m really fast,” continues Petrucci. “But then the next laps I’m a bit slower and, by the end, I struggle a lot. On the data we see that my tyre temperature goes higher and higher and higher – more than all the other Ducati riders. And sometimes the front tyre doesn’t support my weight – sometimes I need to brake early because if I brake late the front tyre collapses.”

Burly Petrucci and lanky Valentino Rossi are good friends, so they do discuss this issue. “We would both be happy if the regulations were changed to a combined minimum weight of bike and rider,” adds Petrucci.

Rossi (181cm/69kg) has more of a problem with height than weight, but the result can be the same. “When you are tall it’s more difficult for rear tyre life,” says the veteran, who crashed out of the lead at Sepang when he lost the rear in the closing stages of the race.

“There are some advantages to being tall on a bike, but for sure you stress the rear tyre more, because you can’t move to the front of the bike so much. Maverick [Viñales, 171cm/64kg] is 10 centimetres shorter than me, so he can be more over the front of the bike with the top of his body, which makes a difference. But for sure, with these tyres, you suffer a lot if you load the rear tyre too much.”

This has been particularly true during 2018, with Rossi likening the race strategy at some rounds to that of a cycle race, with the leaders staying bunched together, saving themselves for the final push. This is because Michelin went softer with some of its 2018 compounds.

“At some tracks we went softer because riders didn’t use the harder tyres so much last year,” explains Michelin’s MotoGP manager Piero Taramasso.

“Also, we went for softer compounds because the riders always ask for more grip and because we wanted to beat some lap records. Now we will analyse the data from this season and at those tracks where we went too soft we will go harder again. For example, at Phillip Island and Buriram the wear level was quite high, so we will use more resistant, harder compounds at those tracks in 2019.”

However, not that much harder. “It would be easy for us to make harder tyres so the riders can push from start to finish, but you will see boring races,” Taramasso continues. “Like before, you will see always the same riders, who can push harder in the early laps and warm up their tyres, then go away from the others. What we do now is give more opportunities to more riders, so the racing is closer.”

Related: “The challenge for Dani is that he’s tiny”

“I think this would be a good idea,” he adds. “It would help the smaller riders and heavier riders to be more equal with the other guys, because weight does have an influence on the tyres.”

Perhaps it’s no surprise that Ducati Corse boss Gigi Dall’Igna thinks the same, because he’s got Petrucci in his 2019 factory team. Petrucci’s factory-spec Pramac GP18 already sits 10mm lower than other GP18s, to reduce the negatives of his size, by decreasing load transfer to reduce tyre temperature.

“Every race this year we have done something different to the set-up of Danilo’s bike to try to reduce the weight problem,” says Dall’Igna. “We’ve done a good job but, in the end, that problem cannot be solved. The difference between the smallest riders and the biggest riders is quite big, so I think it would be better to reduce this gap [with a combined minimum weight], even if we couldn’t completely equalise all the riders.”

So that’s a done deal then… Or maybe not, because nothing is quite that simple these days.

The subject will no doubt come up for discussion within the MSMA, but who knows which way the six factories will vote? Race director Mike Webb is certainly open to discussing the subject.

“There’s no doubt that rider weight makes a difference and maybe with the tyre question it’s worth looking at again,” he says.

“My concern would be adding more weight to the bikes which are already very heavy racing motorcycles, because when they crash there’s already so much energy in them rolling down the track. It’s something we’d have to look at very carefully.”

Of course, rider size has always been a factor in motorcycle racing – how many big and burly Grand Prix world champions do you know?

“There’s an ideal size and weight for a motorcycle racer, in every class,” adds Webb. “Really big guys and really small guys have a disadvantage. Look at Dani – he’s so light that his whole MotoGP career has been a problem and I don’t know if we can fully fix that.”

Certainly, MotoGP couldn’t fully fix the problem but at least it could level the playing field.