The second in our series of tech investigations into all six MotoGP factories: this week we reveal the main aims on Ducati’s 2018 R&D list 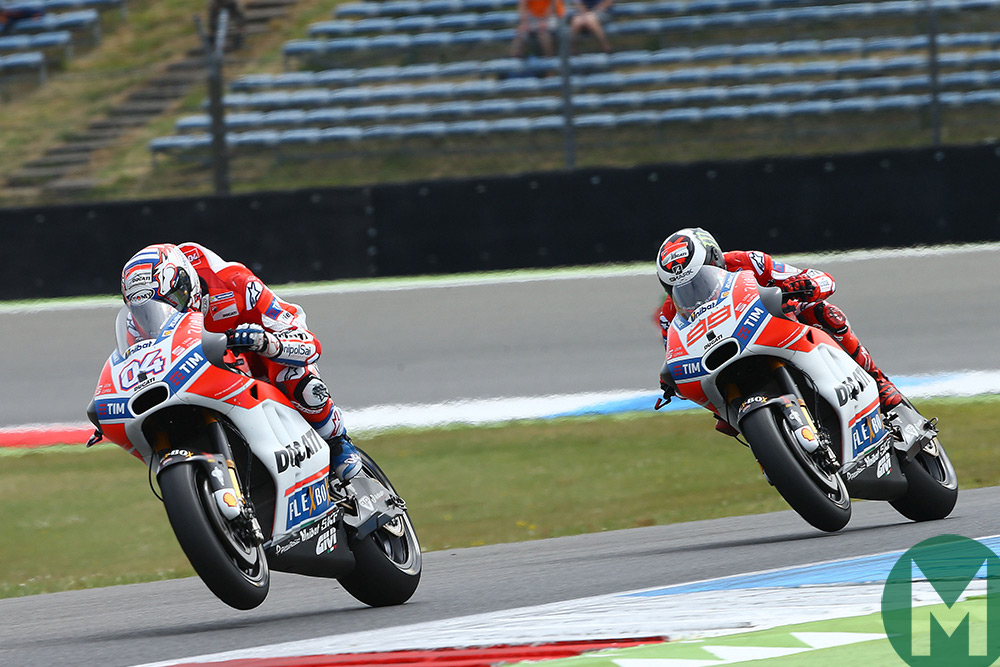 Last season Ducati played its best MotoGP campaign since its glory days with Casey Stoner. The factory won six races, fought for the riders title to the final round and very nearly made it into the top two of the constructors’ championship for the first time since 2008.

It’s been a long road through the wilderness since Ducati lost Stoner’s racing genius. Ducati Corse engineers have had to throw away many of the Desmosedici’s unique features to make the bike competitive again. First, the screamer engine was replaced by a big-bang configuration when Valentino Rossi arrived, then the carbon-fibre chassis went before he was gone.

After Gigi Dall’Igna joined, crankshaft rotation was changed to improve steering. Now the factory is working to make the Desmosedici more like the other bikes through the crucial mid-corner phase.

This isn’t so much Ducati copying its rivals as it is the reality of a championship run under control-tyre rules: if you want to be competitive you must adapt your bike to the tyres, which effectively means that the entire grid becomes homogenised.

The Ducati is still different, of course, but the less different it becomes, the more competitive it becomes. No doubt one of the reasons Dall’Igna wanted to get his former Aprilia rider Jorge Lorenzo on board was to bring some of the Yamaha YZR-M1’s user-friendliness to the Desmosedici, which is exactly what’s happening, according to Lorenzo’s chief engineer Cristian Gabbarini.

“The base is good and for sure we are working in Jorge’s direction,” says Gabbarini, who last worked at Ducati when he was Stoner’s crew chief. “I think next year the bike will be closer to Jorge’s riding style. Many of his comments matched what other riders were saying, so Ducati is pushing to improve the bike in that direction.”

Of course, Lorenzo didn’t win a race last season, while Andrea Dovizioso won six, in his fifth year with the factory. The Spaniard and the Italian have slightly different riding techniques, but they aren’t night-and-day different. And Ducati can happily cope with moving forward in two not-quite-parallel directions.

“It’s no problem to go two ways,” affirms Gabbarini. “For sure it’s more effort for the factory, but the positive is that you can learn more because you can take positive things from both directions. I think if we can improve some areas of the bike for Jorge, then every Ducati rider will enjoy the improvements. Yes, it’s possible to get lost going when you go in two directions, but Gigi is very good at understanding when is the time to say yes or no.”

The Desmosedici is very good at braking into corners and accelerating out of them; its only real flaw is the few metres between those two phases.

“The bike is super-stable in hard braking and in general it has good traction, but we miss a bit of turning, as all the Ducati riders say,” explains Gabbarini. “This part of the corner is very important for Jorge, because we know very well that his corner speed is his advantage, so he really needs good mid-corner turning to be fast.”

Ducati riders use the rear brake more than anyone; not only for deceleration, but to aid turning and to adjust tyre loads and geometry.

Meanwhile, Ducati is working to improve turning by fixing two main problems for 2018: sweetening the V4’s power delivery at the first touch of the throttle and fine-tuning frame flex.

The effects of both stiffness and low-rpm torque delivery are intertwined in the crucial mid-point of the corner. Essentially, it’s all about getting the bike turned quickly, so the rider can get on the throttle nice and early, without being on the edge of the tyres.

Dall’Igna and his aerodynamics engineers are also working hard on the GP18’s bodywork. Last season Dovizioso and Lorenzo went their own ways with aero, Dovizioso only racing the hammerhead fairing at the Red Bull Ring, where three long straights preceded by first-gear corners make front downforce essential to reducing wheelies. At other tracks he didn’t like the way it affected turning and changing direction, so he stuck with the conventional fairing. Lorenzo, however, loved the revised hammerhead from Brno onwards, because the downforce it generated gave him improved front-end contact through corners. Dall’Igna’s challenge is to find a compromise for Dovizioso, which will give him less wheelie out of corners and more front-end contact into corners, without making the bike heavier to steer.

Dall’Igna will no doubt come up with something interesting, because of all the engineers in pit lane he’s the man who likes to think outside the box, from winglets to mass dampers.

Of course, there will be non-technical matters of interest within the factory Ducati garage next year. Last season was Lorenzo’s learning year with the factory. The three-time MotoGP champion did a great job, because it’s a huge ask to jump from a Yamaha to the Ducati. He chipped away at the GP17 until by season’s end he was capable of winning races at some tracks. Now that he is ready to win races, how will that affect the dynamics within the team, especially taking into consideration Lorenzo’s lack of respect for team orders at Valencia? Both Dovizioso and Ducati played down the fallout from that race, but it will be interesting to see what happens when they’re together on track, fighting for position.