Marc Márquez better make sure he enjoys this weekend at his favourite racetrack, because he may never race there ever again 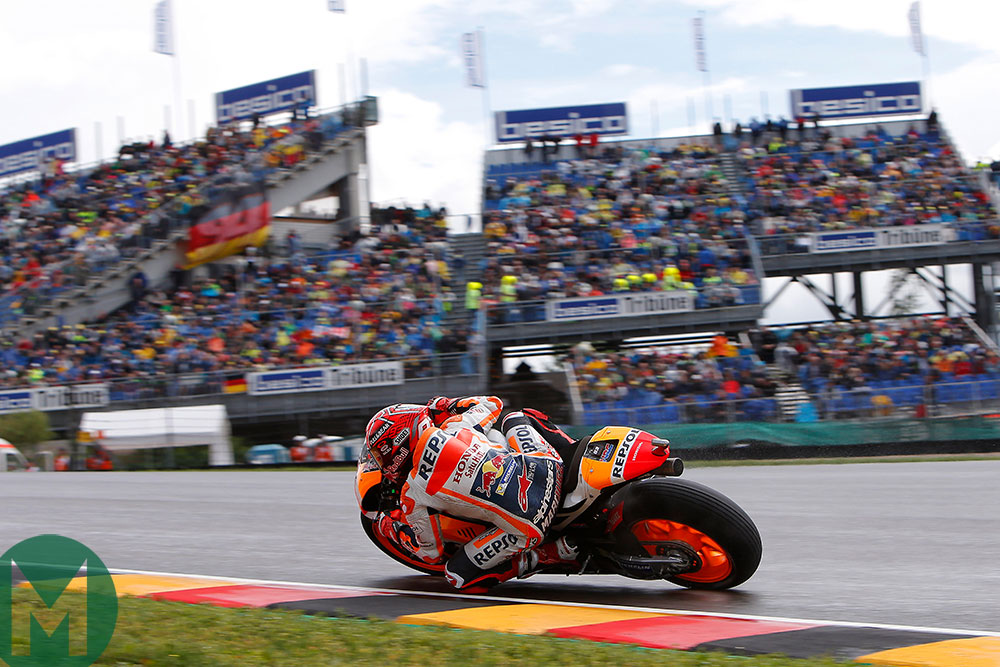 The last time Marc Márquez left the Sachsenring without a winner’s trophy was during his second season in the world championship way back in 2009. Every July since 2010, the Spaniard has climbed to the top step of the podium at the German venue. That’s eight consecutive victories, across the 125cc, Moto2 and MotoGP classes. In other words, the track is as close as it’s possible to get to a dead-cert 25-point haul for the reigning MotoGP world champion.

However, the much-loved Sachsenring is set to be axed from MotoGP because it can’t make enough money to survive, even though it’s one of the championship’s more popular events.

The venue’s exit from the series is a sad moment for those who enjoy spectacular, challenging racetracks suffused in racing history and surrounded by huge, enthusiastic crowds.

So why is this the end? It’s complicated…

The Sachsenring hosted its first races in 1927, around a 5.3-mile road circuit to the west of the town of Hohenstein-Ernstthal, just down the road from the world’s biggest motorcycle factory, DKW, the heart of Saxony’s love affair with motorcycles and engines. In 1961 the track – still partly cobbled – became the first in a communist country to host a round of the world championships.

After the reunification of Germany, local enthusiasts campaigned for the construction of a Sachsenring short circuit to continue the region’s racing heritage. In 1996, their dreams became reality. Kind of. Plans for a permanent racetrack were turned down because the surrounding area is largely residential, so what they got instead was a compromise, which is why the Sachsenring may never host another MotoGP race after Sunday.

Some of those enthusiasts that were denied a permanent racetrack came up with a bright idea: link the layout of the town’s newly built road-safety centre with part of the old road course to create a temporary racetrack. In 1998 the new Sachsenring hosted its first motorcycle Grand Prix, replacing the Nürburgring. Three years later, local government invested in the project to lengthen the Sachsenring from 2.2 miles to the current 3.7 miles, with the new section that runs from Turn 11 to Turn 1.

Over the past 17 years, the Sachsenring – unique, quirky, challenging and unforgiving – has gained something of a reputation with MotoGP riders. The undulating layout is a real rollercoaster: it starts slowly, then builds through seven consecutive left-handers before sending riders plunging into the downhill Turn 11 right-hander (recently named Ralf Waldmann Kurve) and towards the final two lefts; the scene of many final-lap thrills and spills.

But despite its challenging quirkiness, the Sachsenring remains a compromise. It is MotoGP’s only non-permanent racetrack and therefore subject to numerous restrictions and limitations.

The circuit is limited to 10 days of racing per year, of which the Grand Prix accounts for three, which isn’t a great business model. And, because parts of the circuit adjoin private land, the owners of that land have built their own grandstands – from which they take all the money – even though they contribute nothing to the show. The biggest of these are the huge concrete stands outside the last corner, which are owned by Besico, a local Ford car dealership (see photo above). The circuit itself has no permanent grandstands, so these must be erected and broken down each July, at great cost. To further complicate matters, the road-safety centre owns the track from Turn 1 to Turn 11, while local government owns the section from Turn 11 to Turn 1.

For all these reasons and more the Sachsenring is, effectively, financially unviable. The rights-holder of the German Grand Prix is the ADAC (the General German Automobile Club), which has organised racing events for at least a century. By 2012 ADAC had had enough of the Sachsenring and its financial worries, so it retreated from full control out of the Grand Prix and allowed a new company formed by local politicians and stakeholders to manage the event and all its risks.

No surprise that the new promoter – Sachsenring Racetrack Management – has also struggled to make the Grand Prix pay. The company increased ticket prices in an attempt to reduce losses, but this only turned fans away, reducing attendance from a peak of around 200,000 to last year’s 164,000, which still bettered events like Jerez and Assen. Earlier this year ADAC once again ran out of patience. It cancelled SRM’s contract and started work on finding a more financially sustainable home for the German round of the championship.

ADAC holds the German MotoGP contract until 2021. There are three likely scenarios for 2019 and beyond. First, the event will move to the Nürburgring, which shared the West German and German GPs with Hockenheim between 1984 and 1997. The 2.8-mile circuit was recently inspected by MotoGP safety officials and will require only minor adjustments, although the event was never a great success at the venue in the Eifel mountains, near the Belgium border. Second, there will be no German GP. Third, ADAC does another deal with a new partner to keep the event at the Sachsenring. This isn’t impossible, but it’s unlikely.

Some Sachsenring racing history. The venue’s story goes back to the 1920s, when Germany first fell in love with motorcycle racing and became the world’s biggest biking nation. Lots of ‘bike-racing history – both good and bad – has been made there.

In 1936, Norton factory rider Jimmy Guthrie won the German 500cc Grand Prix, beating DKW’s Hermann Müller, whose leathers carried a swastika, as required by the ruling Nazi party. The following August Guthrie led the race once again and was cruising to the finish where 300,000 fans stood to cheer him past the chequered flag. But he didn’t make it. He had crashed a mile from the finish and died later in hospital. The Scot was given full military honours by the Nazis, who transported his body out of Germany with an escort of NSKK (Nazi motor corps) soldiers. A small memorial to Guthrie still stands at the site of his crash, on the B180, a few hundred yards north-west of the current circuit, near Gästehaus Bethlehemstift.

In 1961 the track hosted the East German Grand Prix, the first world championship staged by an Iron Curtain nation. The event became a publicity coup for the GDR (German Democratic Republic) government, which got behind the success of MZ, the state-owned motorcycle brand, based in the old DKW factory in nearby Zschopau, which won numerous Grands Prix and challenged for world championship success. 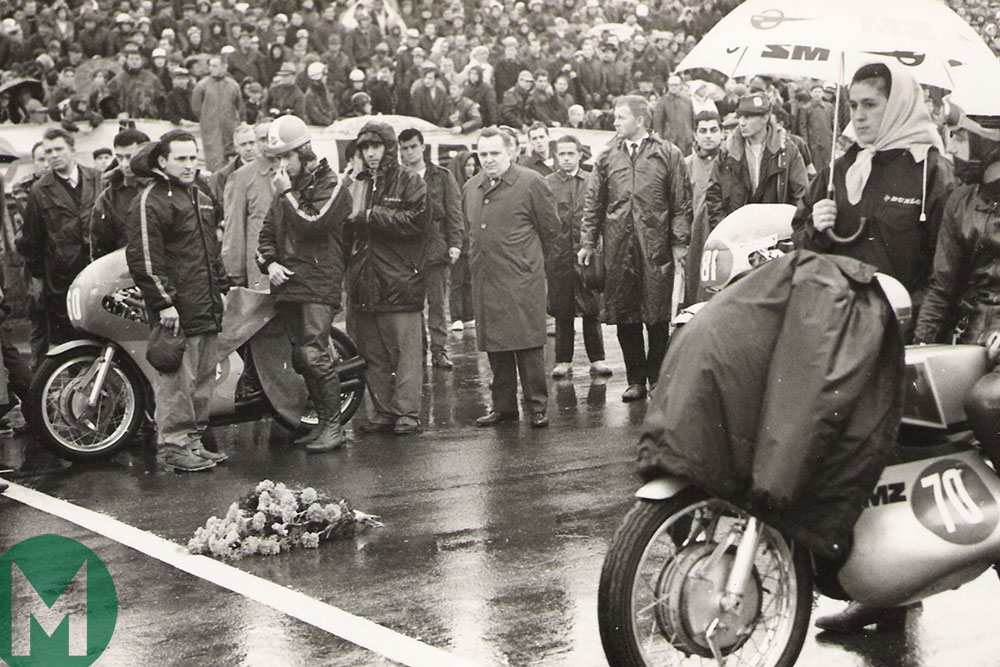 In July 1969, former 125cc world champion Bill Ivy died during practice for the East German 350cc Grand Prix. He was killed when his Jawa V4 seized and threw him into a roadside wall in Hohenstein-Ernstthal. Ivy was motorbike racing’s first rock and roll star, some years before Barry Sheene. Despite his death, the race went ahead, with Giacomo Agostini starting alongside a wreath laid on Ivy’s grid slot (above).

In the early 1970s, the GDR withdrew the Sachsenring from the world championship. Legend has it that this happened following the victory of West German Dieter Braun in the 1971 250cc East German GP. The story goes that the vast crowd greeted Braun’s success by enthusiastically singing the West German national anthem, convincing the authorities that the Grand Prix might provide the spark for a popular revolution, so it needed cancelling.

In fact, that’s not what happened. At that time the GDR government withdrew support from all sports apart from Olympic disciplines. Hence the end of the East German GP, the end of MZ’s world championship team and the end of other East German riders competing in the West. (In fact, not all GDR motor sport activities were finished. The Wartburg and Trabant car-rally teams did continue, but only because Wartburg driver Frank Mielke’s father was leader of the Stasi, the GDR’s murderous secret police force.)

The first Sachsenring short-circuit layout of 1998 was so slow and tight that 500s only had the throttle fully open for five seconds of each lap lasting one minute and 28 seconds. No surprise that the 250cc lap record was less than three-tenths of a second slower than the 500cc record.

At the 2002 Sachsenring GP, Olivier Jacque came within 12 corners of securing the only defeat of the 990cc MotoGP four-strokes by a 500cc two-stroke. The Frenchman led the way on his Gauloises Tech 3 Yamaha YZR500 until he was taken out by Alex Barros at the start of the last lap. Valentino Rossi inherited victory aboard his Repsol Honda RC211V.

Márquez has enjoyed more success at the Sachsenring than anywhere else. The Spaniard always goes well at anti-clockwise tracks, because he trains so much on dirt tracks, which always go left. He won his first race at the ’Ring in July 2010, when he took 125cc victory on his Derbi. Also in the 125 top-10 that day was Tito Rabat, Bradley Smith, Johann Zarco. Márquez was unbeaten at the Sachsenring in Moto2, defeating Stefan Bradl in 2011 and Mika Kallio in 2012.

He is also undefeated in MotoGP, with six victories and six pole positions since 2013. He has only twice failed to score the fastest lap, in 2016, when Cal Crutchlow took second, and last year, when Jonas Folger was second.

There will, therefore, be a lot of people sad to see the back of the Sachsenring, but none more so than Márquez. 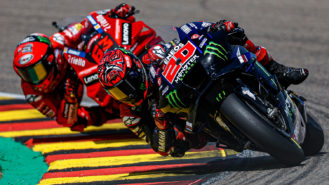 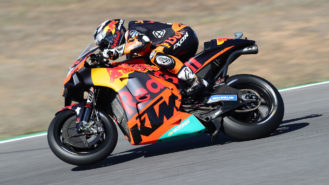 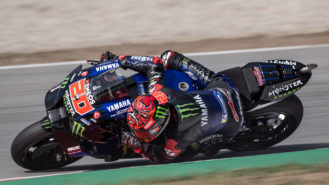