Fausto Gresini, who has lost his life to Covid-19, raced and worked in MotoGP at a time when the sport was safer than it has ever been. And yet the former 125cc world champion turned team owner was unlucky to suffer two huge losses from his rider line-up: Daijiro Kato in 2003 and Marco Simoncelli in 2011.

Despite losing two legends Gresini couldn’t give up racing. Like many team owners in the MotoGP paddock, he had gasoline coursing through his veins so however bad things got he couldn’t help but keep going.

In recent years Gresini Racing usually had riders in all three grand prix classes: MotoGP, Moto2 and Moto3. That is the work of a motorcycle-racing obsessive!

Gresini the rider enjoyed his greatest successes when Italian two-strokes dominated grand prix racing’s smallest class, thanks to bike-mad Italians just like him.

There was Giancarlo Morbidelli, who used his woodworking machinery business to bankroll his racing department, construction magnate Emilio Sanvenero and furniture manufacturer Egido Piovaticci, who sold his race shop to Spanish marque Bultaco. All these bikes were constructed by Italians exactly like Gresini – people who went racing because they loved going racing.

Gresini made his grand prix debut at Monza in April 1983, riding an MBA 125, a customer version of the Morbidelli. He finished an impressive seventh in the race, in which all but two of the 25 finishers rode the little twin-cylinder machines, manufactured through a joint venture between Morbidelli and weapons maker Benelli Armi (hence MBA). That result got him a ride with the Garelli factory at the Swedish GP, where he finished second.

In 1985 he became a full-time Garelli rider and won his first world title on the beautiful aluminium monocoque machines. The following year he had up-and-comer Luca Cadalora for a team-mate. Cadalora was team number two, so he wasn’t supposed to beat Gresini, but he did.

In 1987 Cadalora graduated to 250s with, leaving Gresini to utterly dominate the championship. He won the first ten rounds and would’ve made it an historic full house if he hadn’t crashed out of the last race at Jarama. The only riders to have gone undefeated over a full GP season are Giacomo Agostini, Freddie Frith, Jim Redman and John Surtees. 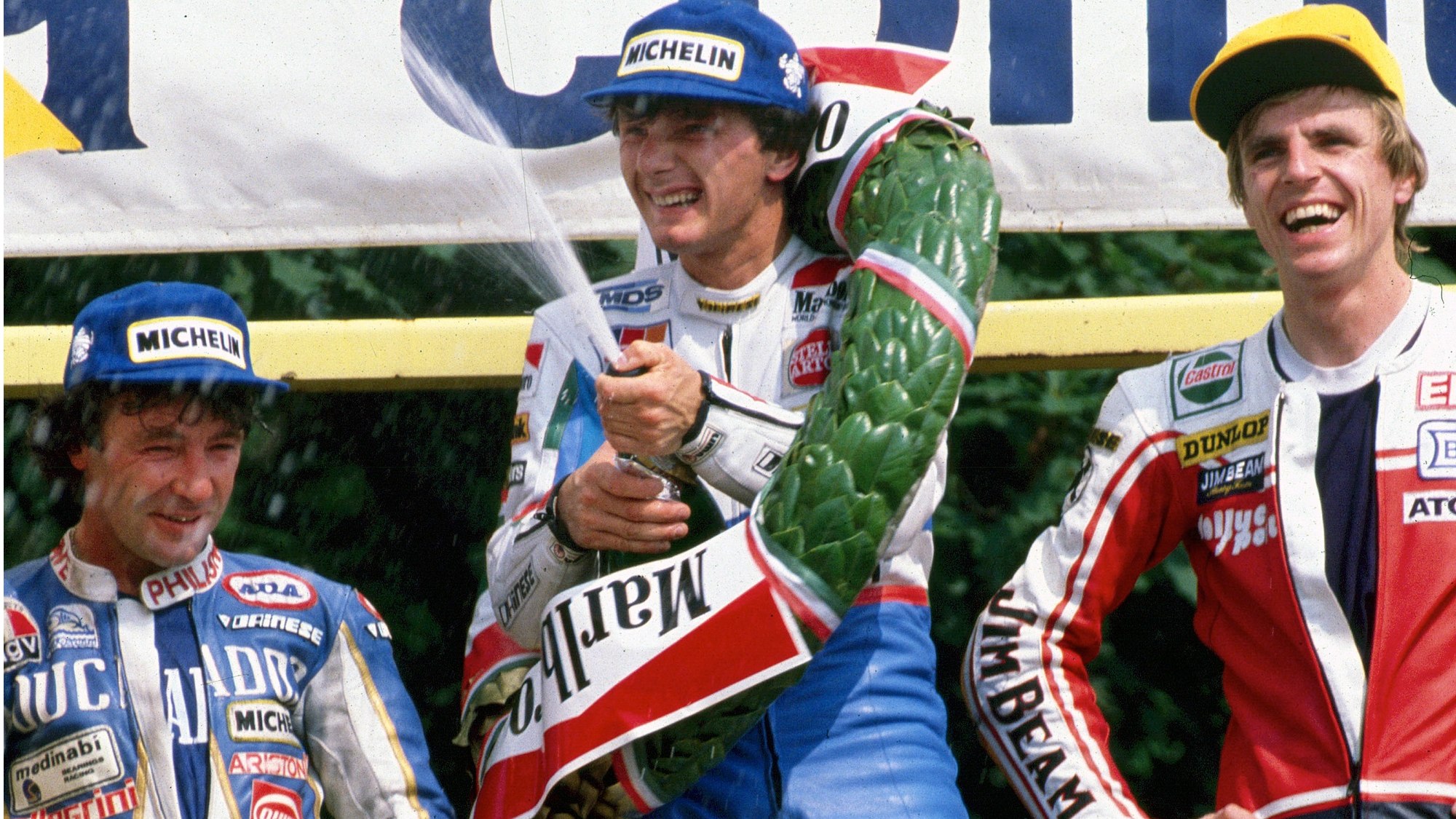 However, the good times ended right there. In 1988 the 125 class was restricted to single-cylinder machines. Garelli’s twin was the fastest bike on the grid but its single was a slug. The company didn’t win another grand prix. And neither did Gresini, until he was signed by 1975 125cc champion Paolo Pileri for his 1990 Marlboro-backed Honda team.

Gresini’s team-mate at Pileri Honda was a teenage rookie named Loris Capirossi, who won the title at his first attempt, sealing the deal at the Phillip Island season finale. During that epic battle Gresini and several other Italians rode shotgun to Capirossi, baulking his only title rivals, German Stefan Prein and Dutchman Hans Spaan.

Spaan became so angry with his Italian tormentors that he whacked Gresini on the helmet as they sped towards Stoner Corner. “I’m a married man, I don’t want to die,” said Spaan.

In 1997 the irresistible lure of the paddock brought Gresini back. The first Gresini Racing line-up was a low-budget, one-man affair: Brazilian Alex Barros riding one of Honda’s new privateer NSR500V twins.

The premier class proved too expensive, however, so in 1999 Gresini dropped down to 250s, running his old team-mate Capirossi, who finished third overall to champion Valentino Rossi and Tohru Ukawa. By now Gresini had won the trust of Honda, so the following year the company entrusted him with its greatest hope: Daijiro Kato.

In 2001 Kato dominated the championship, earning himself and Gresini promotion to the premier class, with an NSR500 in 2002 and an RC211V in 2003. Sadly, Kato lost his life in a high-speed accident at Suzuka.

Over the next three seasons, Gresini riders finished second overall to MotoGP champ Rossi – Gibernau in 2003 and 2004, Marco Melandri in 2005. These results made Gresini Racing the strongest independent team in the MotoGP paddock. 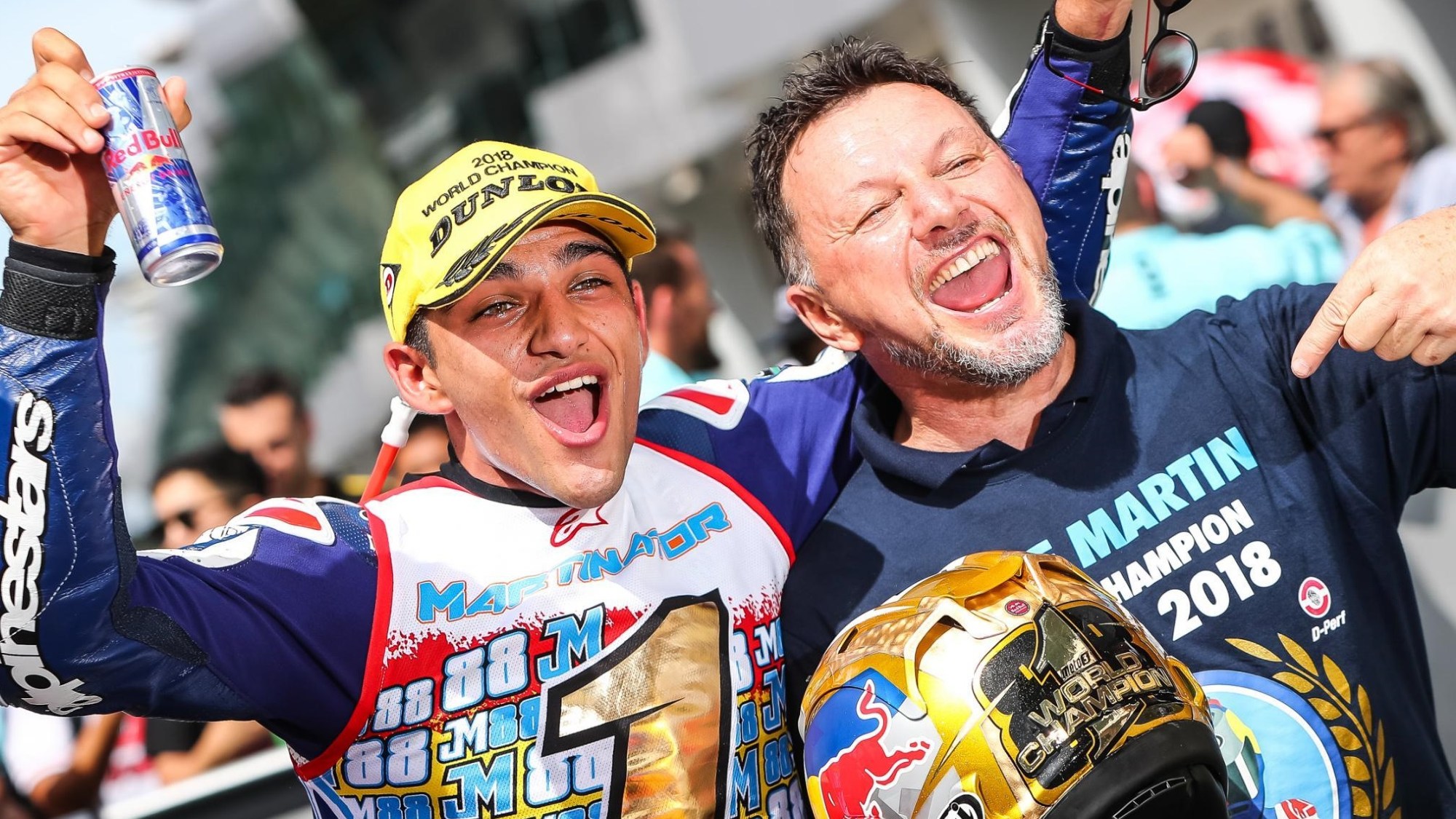 Gresini celebrates the 2018 Moto2 title with Jorge Martin, one of the many riders he has helped climb the ladder

The 2010 season was another big one for Gresini – he signed former 250cc world champion Marco Simoncelli for MotoGP and had Elias in Moto2. Elias dominated the all-new intermediate series, while Simoncelli made quite a name for himself in the premier class.

The following October Simoncelli was killed at Sepang. Eerily, a Gresini team-mate once again climbed to the top step of the podium at the next GP, when Michele Pirro won the Moto2 race at Valencia.

No surprise that this time Gresini came very close to giving it all up.

“Now it’s difficult, it’s different,” he said before the start of the 2012 season. “Marco’s death has changed many things. Motorcycle racing is not a big love anymore. The work, I still love it, but to go to the circuit, I don’t really feel like it. This is my feeling at the moment. I think it will necessarily be a long process.”

Gresini dealt with the pain of losing Simoncelli by throwing himself even deeper into work and creating the biggest team in the paddock. In 2012 Gresini Racing contested all three championships – MotoGP, Moto2 and Moto3 – as well as running a Honda NSF100 minibike series for Honda Italy. Luca Marini enjoyed some of his first successes in this championship.

Gresini replaced Simoncelli with Spaniard Alvaro Bautista, because he didn’t want another Italian rider with whom he might form another father/son racing bond.

In 2015 he switched to Aprilia machinery, signing a mutually beneficial deal with the Noale factory, which used Gresini’s grid slots to return to MotoGP after a decade’s break. The Aprilia deal made life a lot easier for Gresini, who no longer had to rely on sponsors to pay for MotoGP bikes.

This year, as usual, there will be six Gresini riders on the grid: Aleix Espargaró and Lorenzo Savadori in MotoGP, Nicolo Bulega and Di Giannantonio in Moto2 and Gabriel Rodrigo and Jeremy Alcoba in Moto3.

Motor Sport would like to extend its sympathies to Gresini’s wife Nadia, their children Lorenzo, Luca, Alice and Agnese, to his friends and to all members of his team. 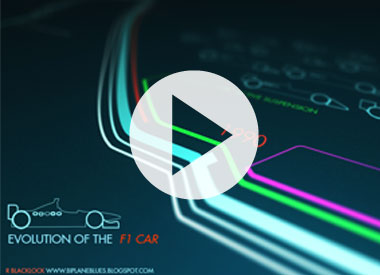