MotoGP’s final outing of 2018 ended with Takaaki Nakagami on top, but the big talk was about Ducati’s latest tech bombs 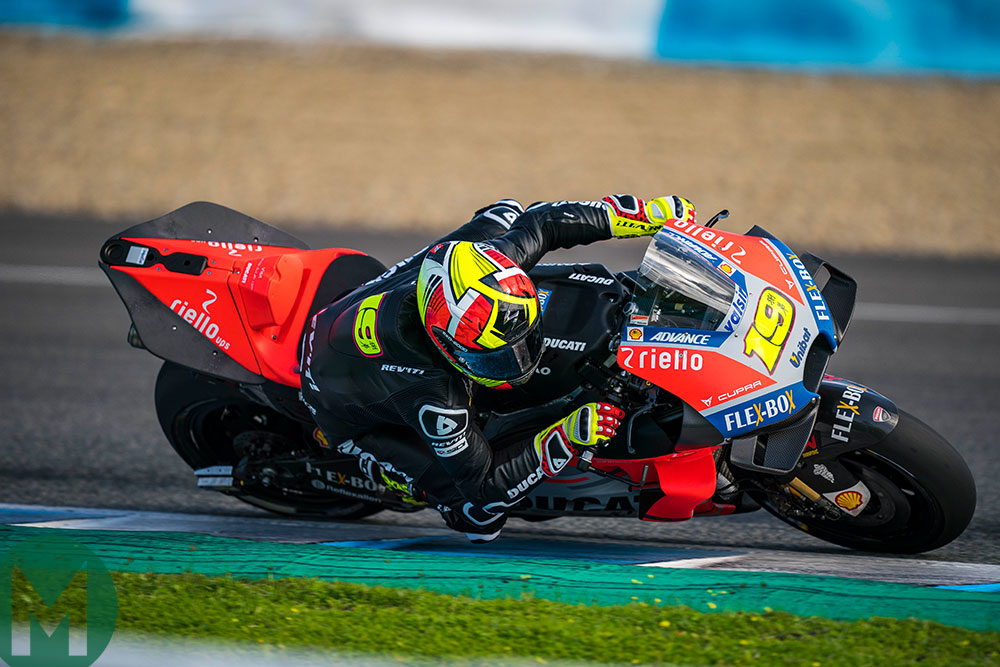 Ducati Corse boss Gigi Dall’Igna has always enjoyed lobbing his little pitlane tech bombs. First were the wings, then the salad box and now a kind of parallelogram rear end. Some of these are Formula 1-inspired and all of them make Dall’Igna very happy, as his rivals check out his latest wizardry – then flatter him with imitation.

In fact, parallelogram rear ends are nothing new: Gilera used a parallelogram rear suspension system on its four-cylinder Grand Prix bike in the 1930s. The technology became popular in the 1970s and 1980s when the rise of the two-stroke dramatically increased horsepower and created all kinds of new demands on chassis design.

Engineers used various kinds of parallelogram rear ends that played with chain force, braking force and suspension force to either maintain constant chain tension, reduce braking pitch or prevent wheelies. These usually involved a torque rod bolted to the rear brake caliper and frame. Sometimes they worked, sometimes they didn’t. They even appeared on road bikes. The doubters dubbed them FUBARs, borrowing an old military acronym that stands for ‘f**ked up beyond all recognition/repair/reason’.

Like much technical trickery, FUBARs disappeared as engineers learned simpler (and lighter) ways of improving chassis performance – better geometry, more refined suspension and so on.

So, what is Dall’Igna chasing with his FUBAR? It’s almost certainly more grip from the rear tyre during braking.

We’ve already discussed how MotoGP riders need to use the rear brake more now than ever, because the Michelins are the opposite of the Bridgestones. The Michelin rear slick is better than the front, so riders need to use its grip to help get the bike stopped in the shortest possible distance.

Dall’Igna’s FUBAR squats the rear end when the rider brakes to improve contact between the rear tyre and the asphalt. Most older parallelogram systems were bolted directly to the frame, but Dall’Igna’s is anchored to the rear shock, so it’s fully adjustable, according to shock linkage and so on.

At Jerez, Ducati used its usual R&D ladder with the FUBAR. First to try the system was Álvaro Bautista, subbing for full-time test rider Michele Pirro who was recovering from surgery. Then Ducati fitted the unit to the Pramac GP19 of Jack Miller, who set his fastest time with it. That encouraged Dall’Igna to interrupt the standard test schedule of factory riders Andrea Dovizioso and Danilo Petrucci. Dovizioso didn’t notice much difference but Petrucci also managed to set his fastest lap with it. In other words, not f**ked up at all.

“It seems to make the bike more stable when you’re grabbing the rear brake – but it’ll take some time to really develop it because at the moment it’s in its primitive stages,” said Miller, who ended the tests seventh fastest, just 0.262 seconds off Takaaki Nakagami. “Our bike is working better and better – we’ve tried a lot of items here and made a lot of progress.”

Dall’Igna second tech bomb of the tests was an aerodynamic rear end to go with the Desmosedici’s aerodynamic front end. 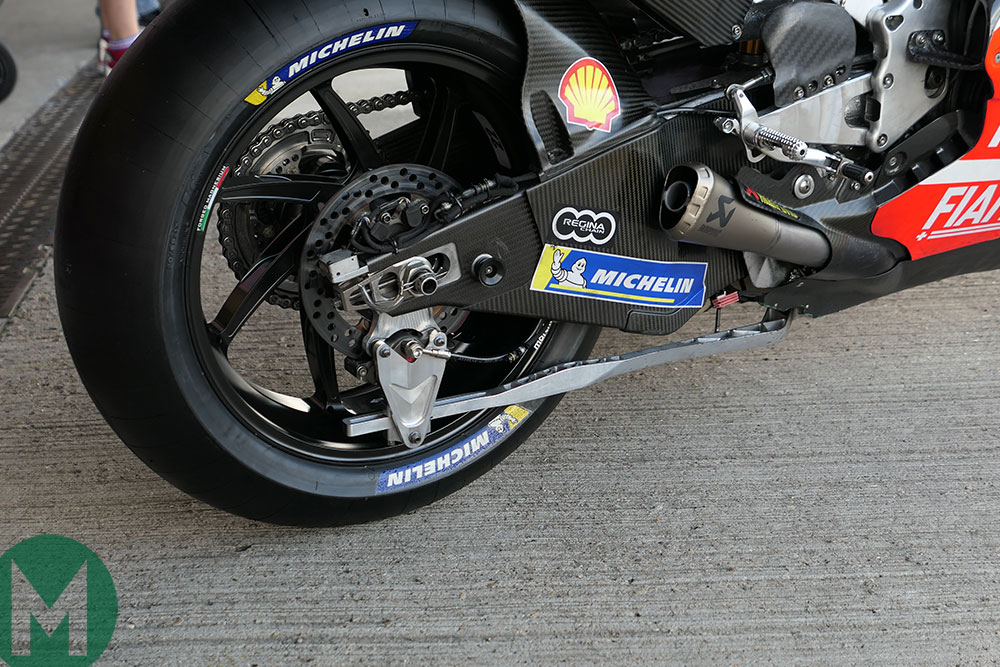 This is also designed to increase rear load during braking and corner entry, giving the rider more rear grip as he sweeps into corners, so he can start the turning process with the rear tyre. This aero is definitely not intended to increase rear downforce when the rider is on the throttle, which would not only be disastrous but would also negate the carefully nurtured front-end downforce. Somehow Ducati has worked out how to make this attachment do one without the other.

Bautista, Dovizioso and Petrucci all tried the revised seat, but there was no real conclusion. “We did two back-to-back tests with the seat but it was difficult to understand because the most important thing in each run is the condition of the tyres,” he said. “In the end we removed it because, although it was maybe a bit better in braking, it made me struggle to keep to the apex in faster corners.”

Petrucci was very fast throughout the tests, ending up fifth, 0.164 seconds off the top and two tenths ahead of team-mate Dovizioso, who had a big crash on day one.

Petrucci believes his promotion to full-factory rider will make a big difference in 2019: “You have many more engineers checking your data, which is a big help. When I come into the pits there are so many engineers around me I can’t see the end of the garage!”

During the two days at Jerez it seemed like every time Ducati’s garage door opened, another gizmo appeared. This made a dramatic contrast to what was going on a few doors further down the pitlane.

Of course, 99 per cent of the development done by the factories isn’t visible. Yamaha’s Jerez focus was engine spec, trying to exorcise the corner entry/exit woes that have ruined its past two-and-a-bit seasons. Valentino Rossi was less impressed than Maverick Viñales.

“Our problems are more or less the same,” said Rossi, laughing but with an air of resignation. “With new tyres the bike is very good, so Maverick is very fast and [so is] Franco [Morbidelli], but after four or five laps we suffer.

“If we raced tomorrow we would be fifth, sixth or seventh; maybe fourth if someone crashed in front, but we wouldn’t fight for victory.

“Sincerely, I don’t know Yamaha’s plan of development… if it will make another step [before the next tests in February].”

Viñales was more upbeat. Indeed, his feedback contradicted that of his team-mate.

“I’m happy because we could be consistent with many laps on the tyres,” said Yamaha’s only race winner of 2018, who was third-fastest on the final day of the test. “I prefer more engine-braking, so the engine I prefer helps me a lot and allows me to enter corners faster.”

Marc Márquez was fastest on day two, until he was demoted from first place by Nakagami by just 0.025sec. Nakagami’s outright speed and pace on his ex-Cal Crutchlow 2018 RC213V once again illustrated the jump that HRC has made from 2017 to 2018, with a hugely improved engine.

But the 26-year-old Japanese rider played down the fact that he was quickest. “It’s impossible to know who was trying 100 per cent and who was trying 80 per cent,” he said.

Nakagami’s speed is significant, however. Honda has always wanted to make history by powering a Japanese rider to the premier-class title. That had been the plan with Daijiro Kato, who lost his life at Suzuka in 2003. Now Honda has another youngster who may just have what it takes to make it, and you can be sure he will get all the help he needs.

Márquez certainly didn’t ride flat-out. He is due to undergo shoulder surgery any day now and he had been told by HRC that he must not crash. However, he was very happy with progress. “We’re in a good place,” he said.

The world champion tried a new aero set, which didn’t make much difference; worked on a new engine spec, which offered some small improvements; and completed most of the test using medium front tyres, which offer more feel than the hard front he’s nearly always had to use over the past few years.

During the tests Márquez rode with new team-mate Jorge Lorenzo and the pair sat down over breakfast to discuss their thoughts about the RC213V. They were delighted to discover that their feelings about which way to go with development were pretty much identical.

Honda has always wanted to make history by powering a Japanese rider to the premier-class title.

Lorenzo was mightily fast, ending up fourth, just 0.135sec slower than his team-mate, and making everyone who had doubted his ability to master an RC213V look very silly. HRC is already working hard to get him 100 per cent comfortable. Lorenzo uses a high-finesse riding technique, so he needs everything to be just right, as he proved last season. At Jerez he used a modified fuel tank, so he can grip the bike better. Once again, he wasn’t allowed to talk to the media, because his Ducati contract doesn’t expire until the end of the year, but his lap times did his talking for him.

Morbidelli was sixth, between Petrucci and Miller, still revelling in the easy-riding performance of his SIC Petronas Yamaha. “I’m ready, ready for anything, ready for vacation,” said the young Italian.

Johann Zarco, who has taken the opposite journey, from an easy-going motorcycle to a wild thing, still looked somewhat shell-shocked. The rookie of 2017 and top independent team rider of 2018 ended the two days in 19th on his full-factory Red Bull KTM, 1.9sec off the top. But he put a brave face on it.

“Compared to Valencia, where I had two crashes, I am more in control and giving better information to the team,” he said. “After Jorge went to Ducati it took him a long time to adapt, but when he started winning it looked like he was on the Yamaha, so working on the bike to give the feeling to the rider is the main thing.”

Of course, if Zarco needs to cheer himself up at any time, all he needs do is check his bank balance.