Was Sunday a case of Marquez making the right tyre gamble and Rossi getting it wrong? Or was it much deeper than that?

“Now is the time to go to the swimming pool and the beach and to have parties with my friends,” said an ecstatic Marc Marquez on Sunday afternoon. 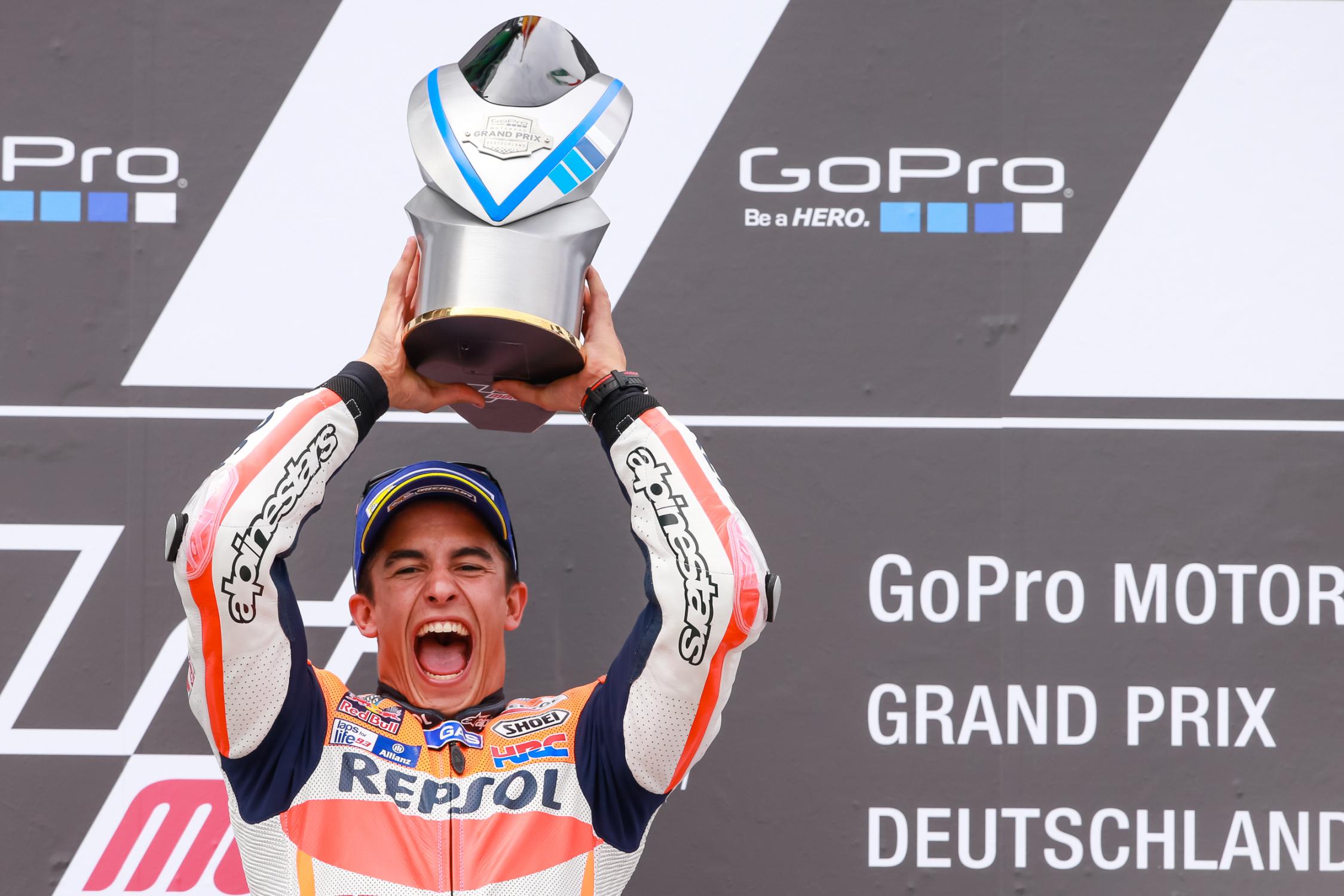 The 23-year-old’s smile was even wider than usual because he fully understood the enormity of his Sachsenring victory, which may turn out to be his most significant success of 2016.

In the most treacherous, complex conditions the youngster did what he always does: take everything to the limit and then beyond. First there was that awesome moment of 80mph dirt-tracking and then the man with the most to lose risked everything on one roll of the dice.

Marquez’s decision to switch to slicks before anyone else seemed inspired. It was also incredibly brave, although it would have been incredibly foolish if he had slid off before he had got some heat into the tyres on the cold, damp asphalt. As German GP star Ralf Waldmann once opined of such conditions, “the difference between hero and idiot is very small”.

In fact there was more than inspiration and a willingness to gamble that put Marquez out on slicks when most riders thought such a move was madness.

The main factor in his decision to switch bikes so early was that his uniquely aggressive riding technique had torn his extra-soft front wet to shreds. Therefore he had to change to his spare bike, equipped with slicks, because he couldn’t continue with what he had.

This put him in the scary situation of riding out onto a still damp circuit on brand-new slicks that were barely warm. Loris Baz had changed bikes two laps earlier, to an inter front/slick rear, and had scared himself so badly on his out lap that he hurriedly retreated once more into the pits, pleading for an intermediate rear. A slick was simply way too risky. 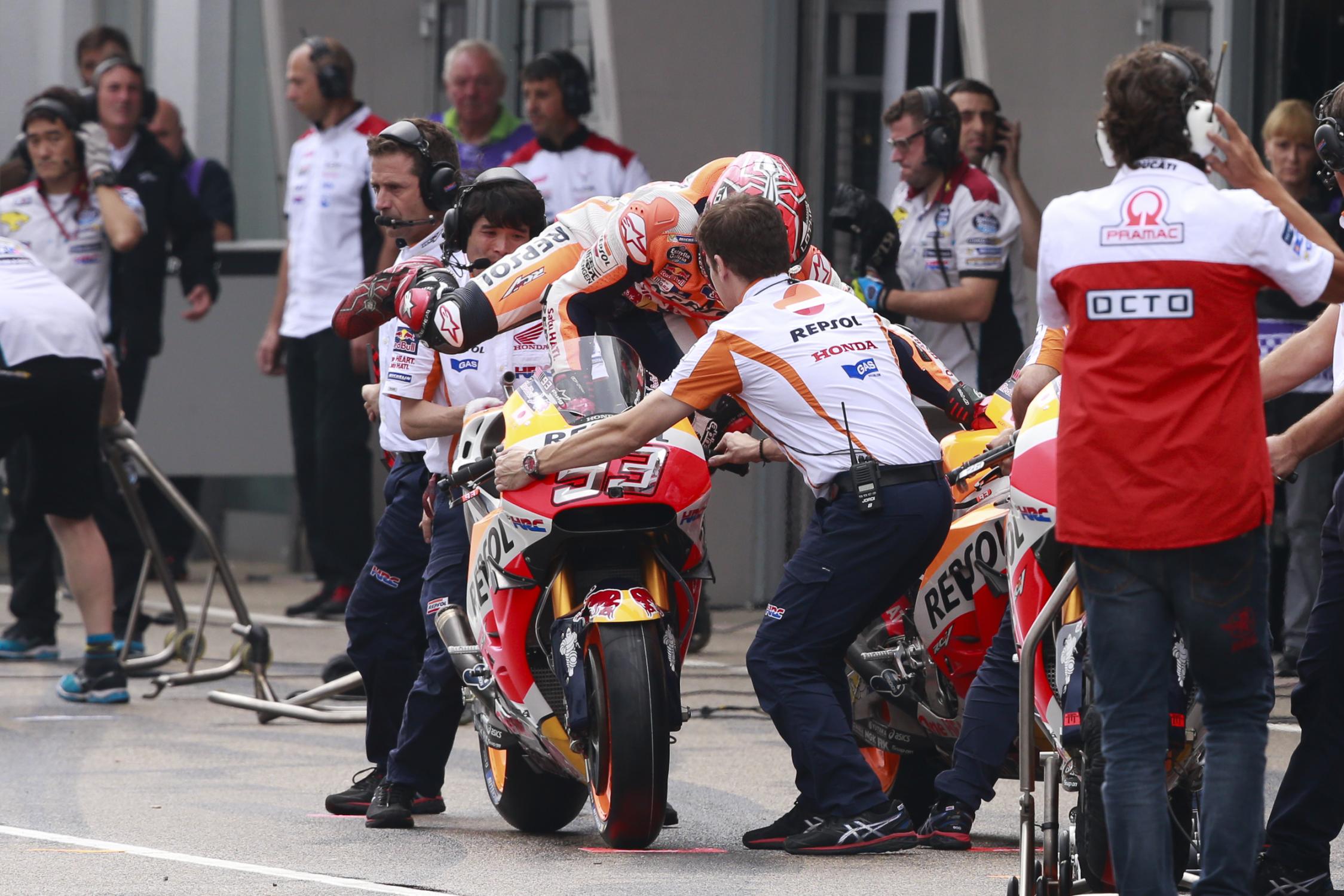 The track was exactly the same for Marquez, of course. Except that he has a different way of going about things, a bit like Casey Stoner. As soon as he left pit lane he applied everything to the max – full brakes into corners and full gas on the way out – never mind that both tyres were ready to jump from beneath him without so much as the slightest warning, because that’s what cold tyres do.

The only way out of this labyrinth is to grab the Minotaur by the horns, give it a swift kick where it hurts, hang on and hope for the best. That’s what Marquez did: he slammed on the brakes and grabbed big handfuls of gas, all the while teetering on the brink of disaster, however great the risk.

This way he forces more load into the tyres, which increases friction and generates more heat. And that’s why he went from sixth place on lap 23 to first place on the penultimate lap, with an 18-second advantage. He risked everything and used his talent to survive on the edge of the precipice, where anyone else who possessed his bravery but not his talent would have toppled over the edge.

For most riders this is a circle that cannot be squared, especially when you are skating around a racetrack at close at 170mph with a dry line that was just a few inches wide in places, the front tucking as you tip into turns, the rear spinning when you touch the gas.

What should have Marquez at least a little nervous was the fact that he already knew how little grip the damp parts of the track provided – his high-speed excursion at turn eight happened when he touched the damp line while still using wets. Remember also that this was where he had had a huge crash just a few hours earlier during morning warm-up.

For the rest of the race Marquez danced along a tightrope, his devil-may-care attitude in fact a jaw-dropping display of talent and confidence in it.

And what of those who didn’t dare walk the tightrope, or tried and failed?

Valentino Rossi lost any chance of what would’ve been a crucial victory by coming in too late and changing to his spare bike equipped with intermediates, which didn’t allow him to go fast enough on the drying track.

However, this wasn’t sheer stupidity. During Friday’s chilly practice sessions Rossi had found it impossible to get enough heat into his front tyre. “We made the decision to use intermediates on my second bike because we couldn’t put enough temperature into the front tyre, even the softest compound,” he said, making special mention of the Sachsenring’s notorious turn 11 right-hander that follows 25 seconds of turning left from turns four to 10. “On paper, changing to slicks may have been better, but I would’ve lost a lot of time in the first laps because I wouldn’t have been able to feel the front tyre.”

That’s why Rossi chose intermediates, so it wasn’t a mistake by either him or his team.

Jorge Lorenzo was obviously in a much worse situation, wobbling around in 15th, wondering how the world had turned upside down. On Friday and Saturday he crashed three times, the same number of falls he experienced throughout last year’s 18 race weekends. His problem is the same as Rossi’s but more so: he can’t get enough heat into the front tyre when track temperatures are low, as they were at the last two north European races. 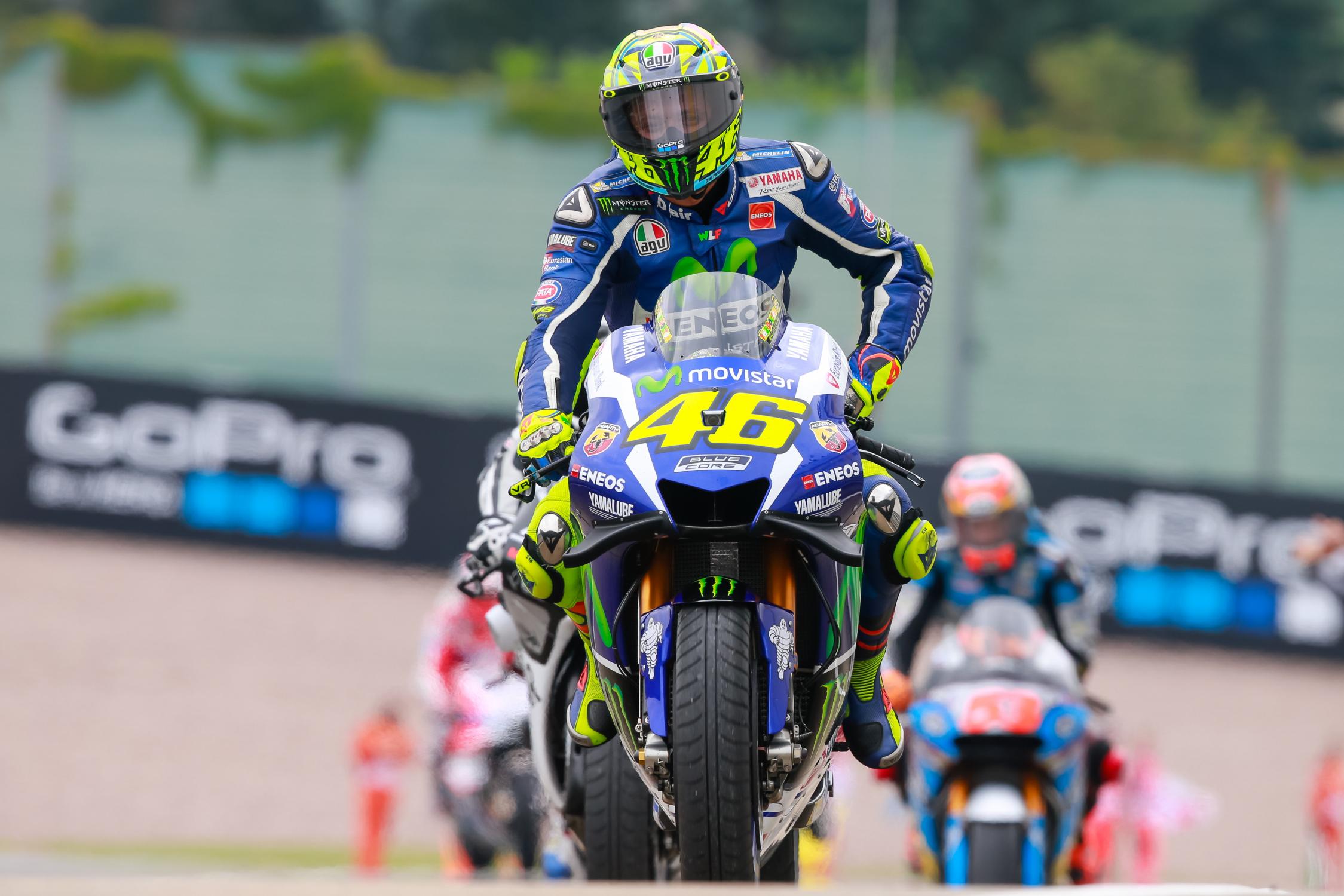 In fact, Lorenzo’s problem is much worse than Rossi’s, because he rides his M1 in a different way and uses a different set-up. The reigning world champion is so super-smooth that he has very little fore/aft pitch in his bike as he rides into and out of corners, which means he develops less load, friction and grip than Rossi.

Yamaha know they have this problem in cold, damp conditions, so somehow they must adapt their longer, lower M1 to generate the same kind of grip the Honda does. Ironically, at the start of the year HRC were worried that Michelin’s not-so-grippy front slick would rob Marquez of his usual advantage in corner entries. In fact his super-aggressive style has turned out to be a positive, because it generates a lot heat in the front tyre. At least that’s an advantage until MotoGP visits a track where high front tyre temperatures can a problem; then the Hondas will probably struggle and the Yamahas will fly.

Can Yamaha blame Michelin? No, because the tyres are the same for everyone and the upshot of control-tyre regulations is that every factory has to adapt its motorcycle to the tyres. It’s inevitable that each control tyre will always suit some bikes better than others.

Lorenzo was in a very different mood to Marquez on Sunday afternoon. “Now I’ll rest, recover and try and forget the last few races,” he said.

The next question mark, of course, is the Austrian Grand Prix. Yamaha will be hoping for hot, summery weather because the Red Bull Ring layout has riders turning right for something like a minute before tipping into the track’s only two left-handers.

View the 2016 German MotoGP result on the Database