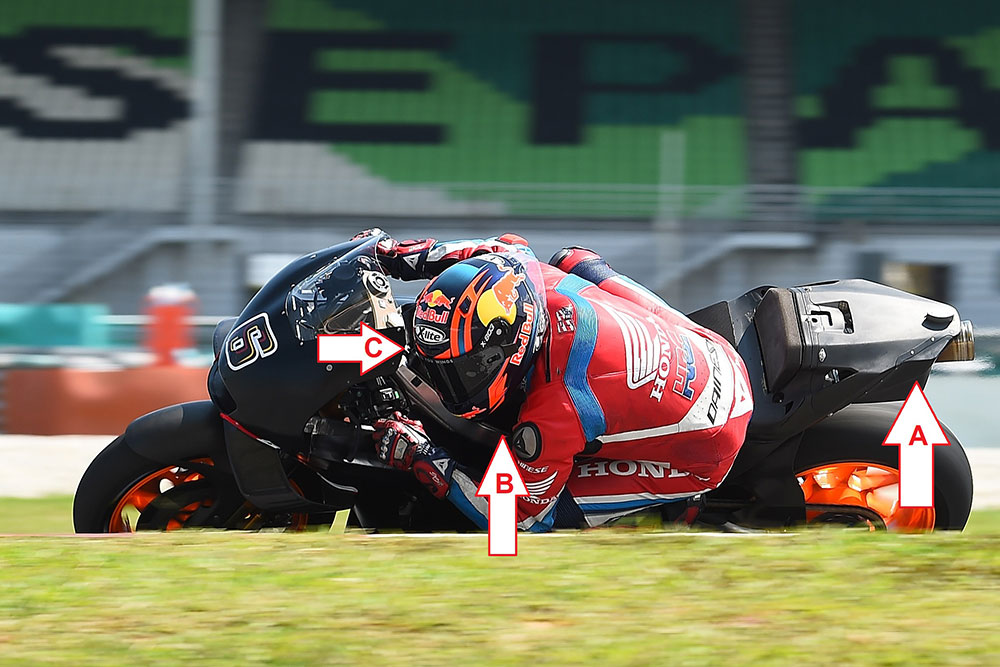 The above photo shows HRC test rider Stefan Bradl rocking through a left-hander during MotoGP’s first preseason tests at Sepang earlier this month.

Apart from new aerodynamics designs, we rarely get to see factories working to improve straight-line performance, because most of that work goes on beneath the bodywork, inside the engine and inside the ECU. But this photo seems to show what HRC is doing in its efforts to eliminate Ducati’s top-speed advantage.

Look at the seat hump (A). If look carefully you will notice that HRC engineers have attached what looks like a small container to the left side of the hump; rather like Ducati’s so-called salad box, which first appeared in 2017 preseason testing. Perhaps we could nickname this piece of kit Honda’s bento box?

Look at the seat hump (A). If look carefully you will notice that HRC engineers have attached what looks like a small container to the left side of the hump; rather like Ducati’s so-called ‘salad box’, which first appeared in 2017 preseason testing.

This one seems to be Honda’s version, a ‘bento box’ of sorts.

What’s inside the box? If you look at (B), you will notice that the small carbon-fibre pods that appeared on some RC213Vs at November’s postseason tests, protruding from the tank cover, don’t appear to be there. Those pods (see photos) hid various electronics cables and connectors, which had previously been mounted beneath the fuel-tank cover. HRC is working hard to increase horsepower and torque by improving engine breathing, hence the redesign of the air inlet and airbox which has necessitated the repositioning of various electronics parts and the steering damper (C), which no longer anchors to the lower triple clamp but to the top of the upper clamp (also see Marc Márquez’s RC213V below).

Which leaves us to guess that the bento box most likely contains electronics kit.

Since Honda built its first V4 MotoGP bike – the 800cc RC212V – its machines have always had very minimal seat humps; indeed the 2007 bike hardly had a seat hump at all. This was all part of HRC’s process of mass centralisation, which really began five years earlier with the RC211V, to improve machine behaviour throughout races.

However, although mass centralisation is important, there are good reasons to use the seat hump to carry all kinds of kit, like electronics, onboard camera gear, mass dampers and so on.

Placing weight at the very back of the motorcycle can damp out chatter, one of the great enemies of fast lap times. Chatter is a high-speed vibration between the tyres and the track, caused by a harmonics mismatch between various parts of the bike. At best it makes you slow, at worst it makes you crash.

The science of the mass-damping effect of a heavier seat hump is simple: the moment of inertia increases by the square of distance, so adding weight that far from the motorcycle’s centre of mass is a great way to help exorcise chatter.

Racing motorcycles are incredibly sensitive to chatter. Back in 2012, when Bridgestone switched to a softer-casing front slick in the middle of the season, Honda’s RC212V was troubled by front-end chatter, which caused Casey Stoner serious problems at some races.

At that time HRC engineers explained how the extent of chatter experienced by Stoner differed in left-handers and right-handers, because the centres of mass of the left and right sides of the bike were fractionally different. It’s that critical.

Who knows, the bento box may have disappeared by the time HRC and the rest of the grid arrive in Qatar for the final preseason tests, starting Saturday. Or perhaps HRC is working towards completely redesigning the RC213V’s seat hump, shifting the exhaust to one side, allowing the box to be carried centrally, like Ducati’s salad box.

Packaging a race bike is never easy, but it gets more and more challenging in MotoGP as factories chase smaller and smaller gains in performance.

Finally, it’s important to remember that Honda doesn’t only want more top speed for the most obvious of reasons, but also because increasing top speed decreases stress on the front tyre, because the rider doesn’t need to leave his braking so late to make up time, which burns the front tyre.

HRC is very keen to reduce heat in its front tyre for 2019, so that Márquez and other RC213V riders have the chance to run softer front compounds.

MotoGP’s new-wave riding techniques: ‘They move on the bikes with an incredible intensity’

Incredible but true, Fabio Quartararo is the first MotoGP champion since Giacomo Agostini who didn’t work his way to the top by riding two-strokes. True, Quartararo rode two-stroke minibikes, but…

2021 was the year of a new MotoGP generation, as Valentino Rossi retired; Pecco Bagnaia and Joan Mir finished behind the 22-year-old champion Fabio Quartararo; and Ducati ended the season…