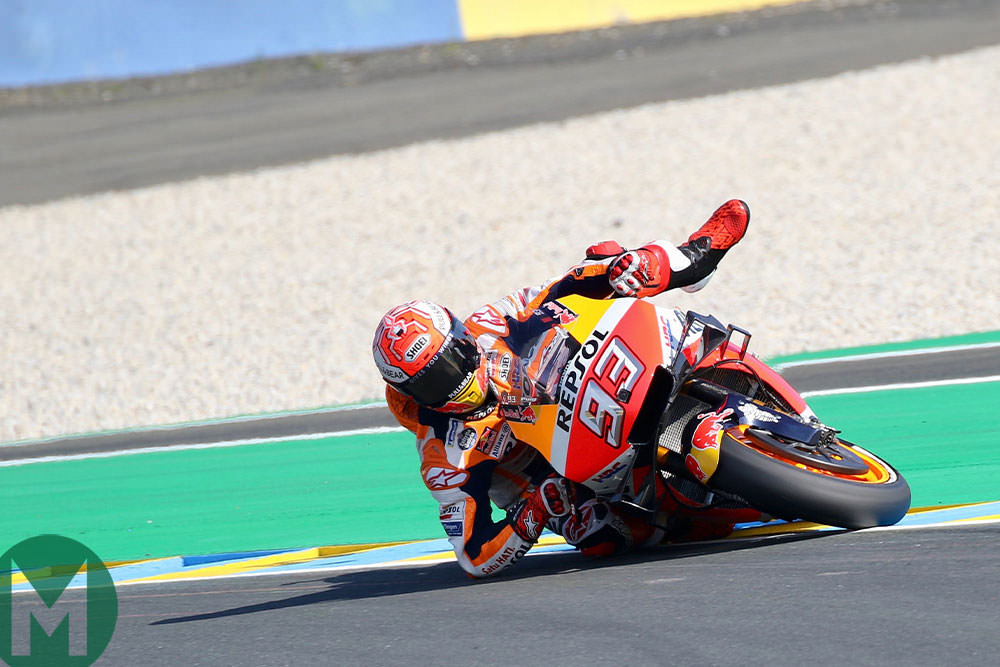 During Friday morning practice at Le Mans, Jorge Lorenzo ran slightly wide at the Garage Vert double-righthander, ran onto the slippery rumble strip and crashed. Minutes later Marc Márquez made the same mistake. As he ran onto the kerb the front end of his RC213V tucked and snapped onto full lock, while the rear end bounced across the corrugations. Both tyres were scrubbing and bouncing, so Márquez dug his right knee and elbow into the asphalt, while his left leg was akimbo. But surely the situation was too far gone – he had crashed. Except he hadn’t.

Inevitably it is these incidents that make the headlines. Fans and rivals marvel at the five-time MotoGP champion’s ability to make possible the impossible. No one else, literally no one else, has ever been able to do the same, at least on a regular basis.

But these spectacular saves are only the tip of Márquez’s iceberg of talent – they are the signs of his unique skills that bystanders like you and me can actually see. What we don’t get to see is the real secret to Márquez’s day-in-day-out speed, which is how his superhuman reactions allow him to play games with the front tyre when he attacks a corner.

The relationship between the front tyre, the fingers of your right hand, your brain and every other part of your body and every part of the motorcycle is complex in the extreme.

It’s easiest to ask yourself this question: can you lock the front tyre at high speed, maintain control and still enter a corner at the very limit? Probably not. That’s what makes the difference for Márquez: he gets that Michelin front slick smearing across the asphalt as he hauls on the brakes, perhaps one-thousandth of a per cent from exceeding the tyre’s traction limit. And then he continues to modulate that situation all the way into the corner, using brake pressure, body position and everything else.

Most MotoGP riders have had the scary experience of locking Michelin’s front slick, even at 200mph, so it’s no coincidence that Márquez has won every MotoGP title since Michelin control tyres arrived in 2016. Inside his head he has the world’s greatest ABS system, which allows him to breakdance on the edge of chaos.

Fellow HRC rider Cal Crutchlow has full access to Márquez’s data, so he knows better than just about anyone what goes on. And he’s as flummoxed as the rest of us.

“I can see on the data how Marc does it, but nobody else can do it; it’s as simple as that,” says Crutchlow, who has won three MotoGP races on RC213V machinery. “On the exit of corners he’s not normally that strong, but through the entry and the middle, the lean angle he puts into the bike and the way he controls it with the front and rear brakes is pretty special. How he locks the front and gets away with it I don’t know. He does lose it way more than me but he saves it. How does he do that? I’ve no idea! He just shoves himself into the ground and picks it back up! At the moment he’s unbeatable, he makes the difference.”

And that, beyond his riding talent, is what it’s all about.

Honda’s RC213V isn’t always an easy machine to master. HRC builds the bike to make the lap time and relies on its riders to extract the maximum from the machine. However, in recent seasons HRC’s engineers have been working to make the bike more friendly. Step by step they are getting there.

It’s significant that Márquez was able to choose Michelin’s soft-option front in Sunday’s cool conditions, because earlier iterations of the RC213V would have demanded a harder front compound, which would’ve offered sketchier grip and therefore required Márquez to take more risks. It is always easier to skid a softer tyre than a harder tyre.

But the biggest improvement HRC has made this year is squeezing more power from the RC213V engine.

During 2016 and 2017 engineers were busy adapting the engine – reversing crankshaft rotation and switching to a big-bang firing configuration – so only since last season have they been able to focus on increasing torque and horsepower. And this is absolutely the best way to reduce stress on the front tyre, because the rider doesn’t have to brake so late or enter the corner so aggressively if he’s not desperately trying to make up time lost on the straights. This is vital, because whatever Márquez’s talent for surviving front-end lock-ups, it allows him to take fewer risks.

“This year we have a much stronger engine, so I can manage things in a different way,” explained Márquez after his 47th MotoGP win, which equals Lorenzo’s premier-class tally. “With more power I am able to ride in two or three ways to find the lap time in a different way to what I did last year. This is important because I can use different tyres and different riding styles. Today I was able to ride in a good way – very smooth – and in the final section I was strongest because there are no brake points, so I just took risks in the corners and not at the brake points, because that’s where it’s more dangerous.

Márquez isn’t the first rider to obsess about getting 99.9 per cent out of the front tyre to gain an edge over his rivals.

“When I was racing we were already pushing the front quite a bit,” recalls Mick Doohan, who won 54 premier-class races and five consecutive world titles during the 1990s. “I used to go out on a scooter and ride around with the front tyre locking, so I could get used to the feeling of the bike falling over. But I’m not dreaming that I was doing anything like what Marc does!”

Márquez’s success goes beyond his mastery of the front-tyre slide. He understands that racing isn’t only about Sundays. During his 113 premier-class GPs he has only qualified off the first two rows a handful of times.

“The race starts on Friday and Saturday,” he said at Le Mans. “Because if you start at the front you can manage the tyres and the risk in a better way.”

Of course, we all know that Márquez makes mistakes. And HRC too. His crash at COTA was a combination of both, but rider and engineers have learned from that. As paddock people often opine: losing makes you stronger.

However, right now, it’s difficult to see anyone matching Márquez this season, even if he won’t have everything his way. Andrea Dovizioso stands only eight points behind, with Mugello and Catalunya next, where the Ducati will be a more powerful force. Then there’s team-mate Lorenzo who takes small steps forward with the RC213V at every race. And there’s that young rookie, who’s already taken over from Márquez as the youngest premier-class polesitter… 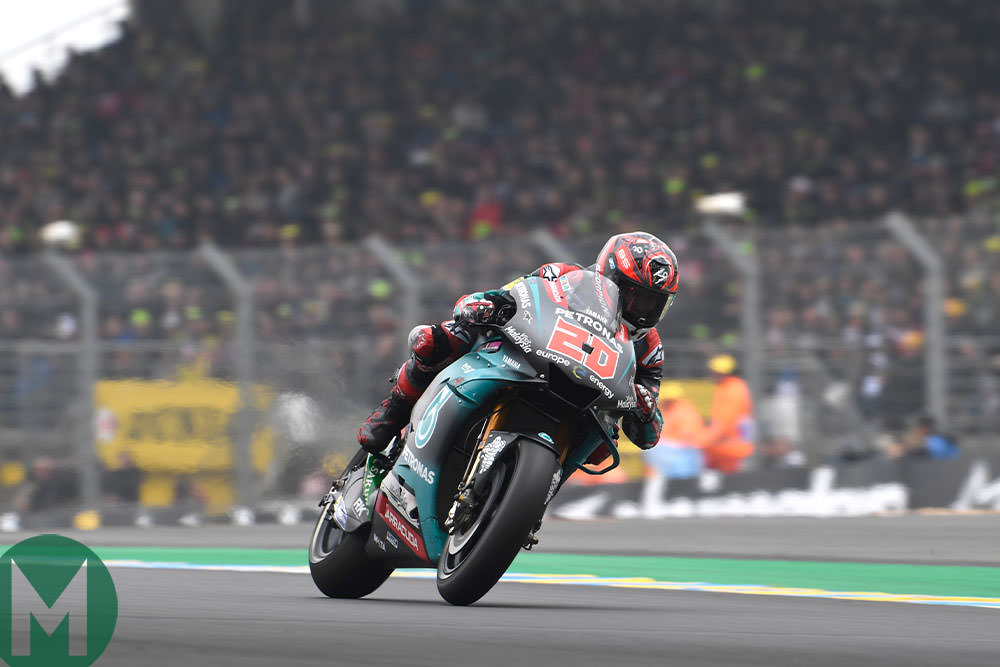 Who can take the fight to Marquez? Perhaps star rookie Fabio Quartararo whose Le Mans results suggest he didn’t have a great first home MotoGP race. But sometimes you must look beyond the results to understand the reality.

The 20-year-old qualified 10th and finished eighth. His fourth-row grid slot, just two Saturdays after he had scored that historic pole at Jerez, was the result of a rain-affected qualifying session, which had him start on slicks, then switch to rain tyres. This was his first day on a MotoGP bike in the rain, so 10th wasn’t so bad.

On Sunday he got a bad launch from the line and very nearly crashed at Turn Two. “I totally lost the front,” he said. “And that lost me more positions.”

By the end of the first lap Quartararo was way down in 15th, already three seconds behind leader Márquez, with a mountain to climb.

Many youngsters would have lost their heads in such a situation – arriving at your home GP as the new home hero with half the crowd willing you to make their day – but he stayed cool, calm and focused throughout the weekend and even when things went awry in the race.

Three-quarters of the way through the race he set the fastest lap, 0.007 seconds better than Márquez’s best. This was significant because it once again showed his remarkable speed: pole at Jerez, fastest lap at Losail and again at Le Mans.

On the other hand, he cheated. Well, sort of.

“I did something I shouldn’t do,” he grinned. “I switched to time-attack mapping [qualifying mapping]. I said, okay, let’s see what happens – if I destroy the tyre it’s my problem. When I passed [Álex] Rins I could use the time-attack mapping more when I was pushing to the limit. But it wasn’t so much a question of me adapting to the mapping, it was just that I was really on the limit!

“With this mapping the bike was spinning a bit more in acceleration, but I could control this with my riding style. Physically the bike was really tough to ride with that mapping, so it was good when the race was finished!

“The main thing I’m learning is how to save the tyres. At the beginning of year I was finding the lap time in acceleration, by pushing like hell, so the tyre was spinning a lot. Now I’m doing the lap time in a different way: not so much in acceleration but more in corner speed and braking, so the reverse of what I was doing at the start of year. This was only our fifth race, so I hope to learn something like this in every race!”

More: Just how fab is Fabio?

Quartararo took the chequered flag 8.4 seconds behind Márquez, which means his average lap time from lap two to the finish was two tenths slower than the winner’s; despite having to work his way through the pack.

“I don’t want to think about what might have been today. With this pace of course I wanted more, but we will stay calm and we will reach our goal.”

Home races are often the downfall of home heroes, especially young home heroes, which is why Quartararo praised his Petronas Sepang crew, led by wise and wily Dutchman Wilco Zeelenberg.

“Sincerely, this is the first year I’ve not felt pressure at my home GP,” he added. “The team and the people around me have made me feel relaxed, but of course I enjoyed all the fans. I’m really happy how I reacted to my home GP.”

With no wish to jinx him, it’s also worth noting that Quartararo has yet to crash a MotoGP bike. So far this year fellow rookie Joan Mir has fallen eight times, while Jack Miller has had seven falls and Márquez six. That says a lot about the scope of Quartararo’s talent.