Ducati’s latest Aussie MotoGP star follows in the wheel tracks of Troy Bayliss and Casey Stoner. This is how he rides and this is how he will surely soon score his first dry-weather MotoGP podium 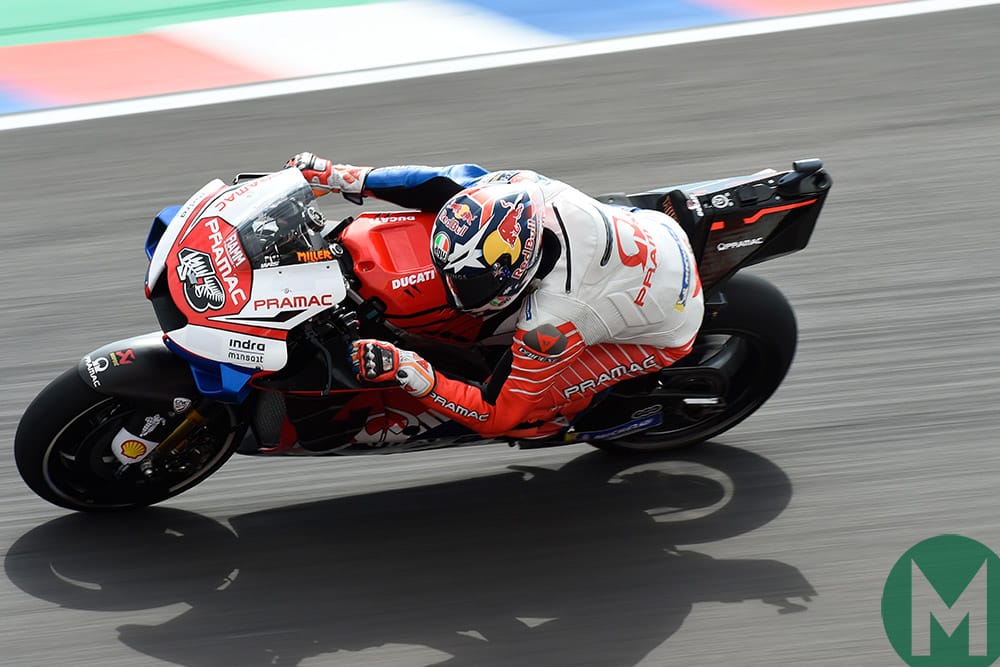 You rode your rookie MotoGP season in 2015, so was it difficult in 2016 switching from factory electronics to control software and from Bridgestones to Michelins?

Electronics-wise, not really, because I didn’t have factory electronics, I had the open software which was literally the worst crap you could imagine. The wheelie control didn’t work at all, but at least it taught me how to handle the raw power of a MotoGP bike. It was a good experience because I learned how to manage the bike in my rookie season. That year I had Nicky [Hayden] and Eugene [Laverty] on the same bikes, so it was great to have those guys to gauge myself against and I beat them in the championship.

I’m happy I had the Bridgestone experience, especially with the Honda, because you were going into corners with 30deg of lean angle and the back wheel wasn’t even on the ground. But that did teach me some bad habits and put me in the wrong direction when the Michelins arrived.

How do you pick up the bike quickly – body weight, footpeg or what?

For me it’s mainly footpeg, body weight and shoulders. The outside ’peg is one of the most important things for me. I push down a lot on the ’peg, because that helps pick up the bike and load the tyre, so it does a double job. Also, I drop my inside shoulder a lot. When I came into MotoGP I watched a lot of videos to look at Casey [Stoner]; he was one of the key guys for riding style. When he picked up the bike up he would drop his inside shoulder, so he’d fall over the front of the bike and get his body weight completely over the front, so when the bike gripped it didn’t wheelie and he already had the bike upright and pointing in the right decision.

More from the ‘How I ride’ series

How much has your riding technique changed since you moved from Honda to Ducati?

I always look at photos and videos to study my riding style. Just from looking at photos it looks like I now trust the front tyre more, because I’m actually getting off the bike more and my shoulders and elbows are lower to the ground. Now I’m touching my elbow on the ground a lot more, which is a sign of confidence because I’m able to lean right off the bike, rather than staying with the bike in case the front lets go. So in that way changing bikes has changed my style a lot.

I have a different style to a lot of the guys – I move my arse a lot more than a lot of them, so I’m a bit Mick Doohan sometimes. It’s just how I’ve always ridden. Even in Moto3 I ran a different sort of style. The goon riding thing [playing up for the cameras on slowdown laps] came from that because I move my arse off the side of the bike a lot more than some guys, so I was taking the piss out of myself, that sort of thing.

Do you think a lot about your technique or does it just happen?

I see a lot of the young kids trying to get their elbow on the ground and stuff like that, which I was never too fussed about. When I say I’ve got a different style I know it’s not the prettiest style. I look at other guys and I think, shit, I wish I could look like that on a bike! But I’m not here for beauty, I’m here for what works for me. Of course, I’m always trying to see what the other guys are doing and trying to work it out.

What’s the most critical part of the corner for you?

For me, it’s more about being patient during corner entry, not trying to make up time there, because the rear Michelin is so much better. So it’s all about getting the bike as calm as possible into the corner, so you’ve got it ready to really fire it out of the turn, using that rear grip to your advantage for the lap time.

You use the rear brake a lot, right?

What percentage of each lap do you use the rear brake?

On the Honda I used it absolutely everywhere, until I was in fourth gear on the straights. I’d use it a bit during straight-line braking, then more during last-minute braking, once the bike is settled and you know where you’re going, just to control your speed entering the corner.

So pretty much the whole lap, apart from the end of the straights?!

Yes, once you had enough speed on the straights to stop the wheelie, or once the wings had enough downforce to hold the front end down.

Have you tried a thumb brake, as used by [Andrea] Dovizioso and so on?

I had one on the bike for all last year’s preseason tests and the first race, but I never touched it once, not even in pit lane. 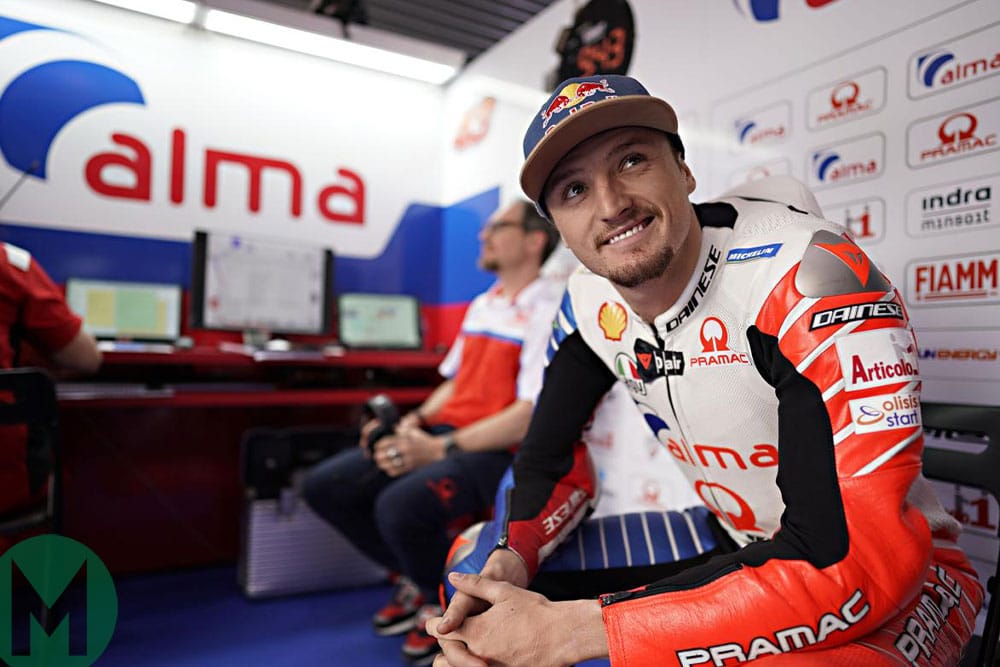 Stoner came from dirt track, so presumably your rear-brake thing comes from that?

I came more from motocross than dirt track; I only did dirt tracks on the weekends I wasn’t racing motocross. I used the rear brake a lot, so it comes naturally now. The first time I hopped off a Moto3 bike onto a Honda MotoGP bike for 2015 I cooked rear brakes. We had to search with Brembo and Honda to find something I could use. The first MotoGP test I did I was melting rear discs, so we fitted a bigger disc, but then I started melting the pads. They were getting so hot they were bending around the pistons. After three laps in Argentina [in 2015] I had no rear brake.

When I was at Honda I continued using an oversize rear disc with a bigger pump and master cylinder. Now with the Ducati I don’t feel the need to use the rear brake as much as I did before.

How do you get on with the process of tyre selection?

Is that challenging or frustrating?

It’s challenging and I think it’s good for the sport because it throws in the tyre aspect again. It’s difficult sometimes because you still get the occasional inconsistent tyre now and then, but that’s getting better. At the end of 2017 the tyres that had already been fitted gave us some problems, so now they’ve got a system where everyone gets one tyre of each compound that’s a refitted tyre and you get told which tyre it is, so you try and use that straight away. Michelin is getting better and it’s working really hard. It is what it is and I can’t imagine it’s very easy to produce the amount of tyres it needs to produce to make everyone happy.

How has your bike set-up changed, from Honda to Ducati?

The Ducati has got really good mechanical grip at the rear, so you can work on the front-end setting and not worry too much about the rear. But in terms of full set-up it feels pretty similar. I also feel I’ve got more contact with the front now. The Honda was very much developed for the Bridgestones, so the rider could pick up the bike and get rear grip, but the Michelin doesn’t work like that, so you had to try and find a happy medium.

Are you a smoother rider on the Ducati?

When I watch myself on videos I look like I’m not pushing now, which is quite strange for me. My manager Aki [Ajo, owner of Ajo Motorsport, backed by Red Bull in Moto2 and Moto3] says I look good now and I look fluid, like I did back in Moto3.

How has your riding changed, moving from the GP17 you rode last year to the GP19 you’re riding now?

The bike is completely different – engine character is the biggest thing. The engine feels a lot smoother, so it’s easier to open the gas when you’ve got a fair amount of lean angle. Then as you pick up the bike you can put the power down nice and smooth. This means you can use the corner speed and let the bike turn a bit more before picking it up nice and early, which helps you to be a little more calm with the bike. That’s the main thing.

I’ve been trying to work on my braking. I’ve always been one of the fastest guys into the corners out of all the Ducati guys, but I don’t seem to do all my braking in a straight line, as a lot of them do. I run into the corner with a lot of lean angle and a lot of brake, which is taking unnecessary risks. Since the Sepang tests we’ve been trying to work on that. Dovi stops the bike straight up and down, so that’s the biggest thing I’ve got to work on.

It’s great having the same bike and same everything as the factory guys, because now I can learn even more from looking at Dovi’s data. Before I could always say I’m on the old bike; now there are no excuses.